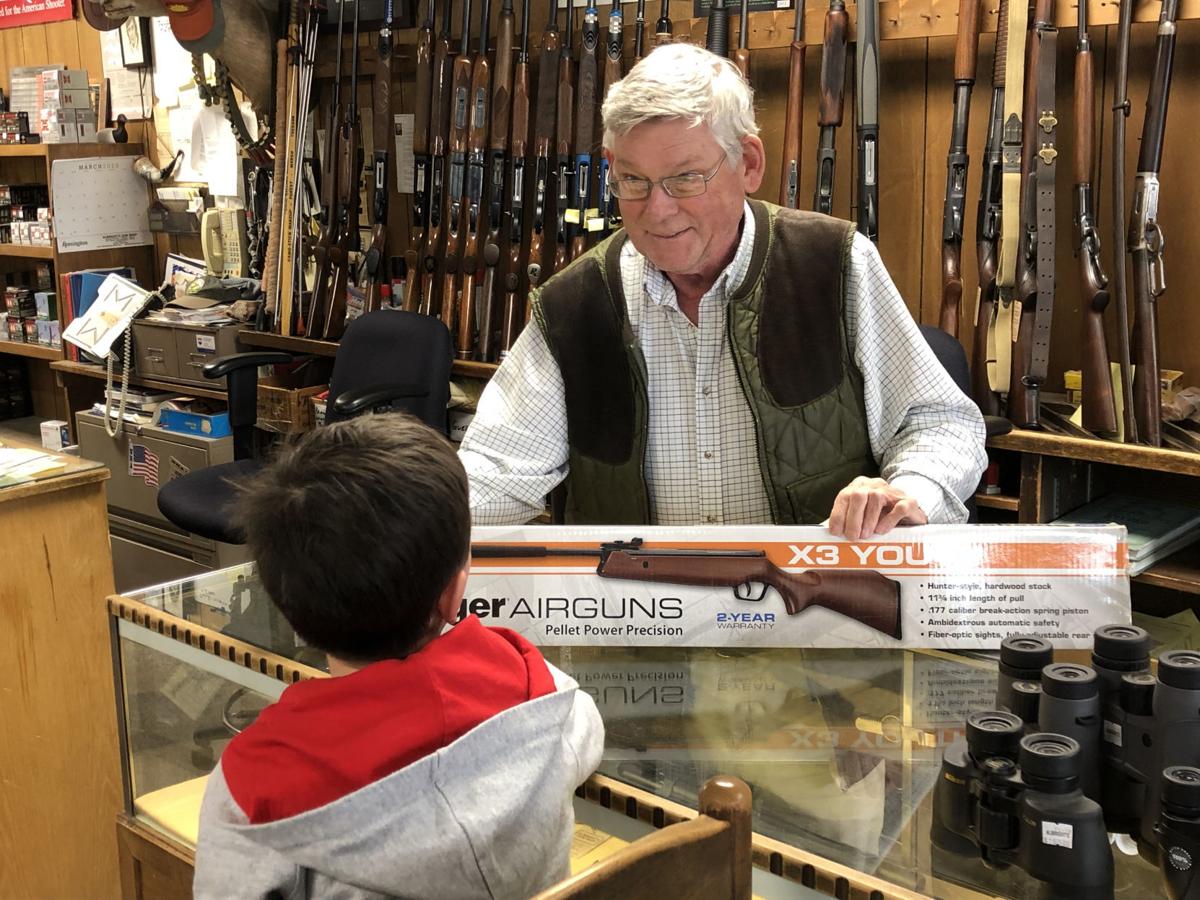 Larry Albright, right, talks about using a pellet gun to a young customer on Sunday, March 22, at Albright’s Gun Shop. Albright said sales at his store have increased greatly in the past few weeks. 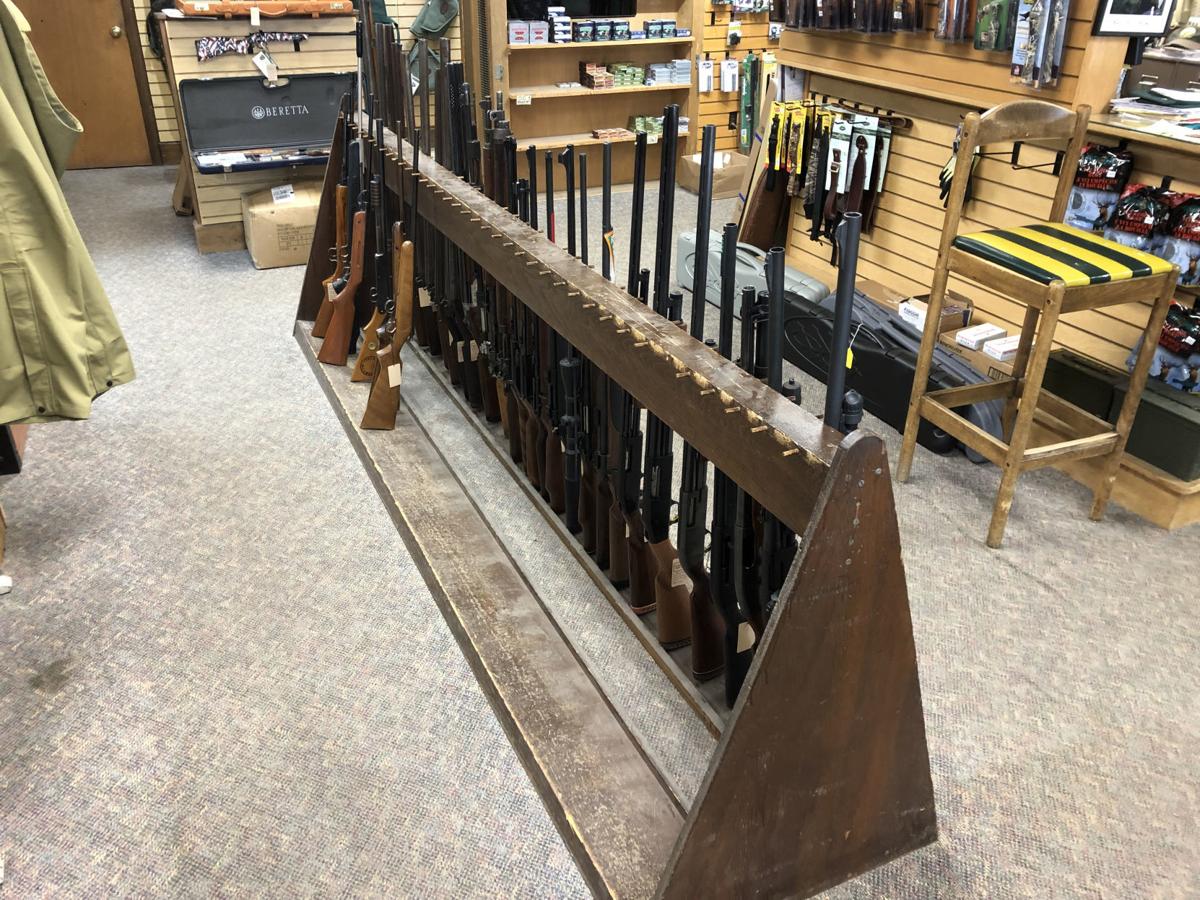 A gun rack which is normally filled with long guns sits partially empty on Sunday, March 22, at Albright’s Gun Shop in Easton.

Larry Albright, right, talks about using a pellet gun to a young customer on Sunday, March 22, at Albright’s Gun Shop. Albright said sales at his store have increased greatly in the past few weeks.

A gun rack which is normally filled with long guns sits partially empty on Sunday, March 22, at Albright’s Gun Shop in Easton.

EASTON — Just as grocery stores have been stripped bare by Americans panicked by the COVID-19 epidemic, guns and ammunition have started flying off the shelves, as well.

Retailers say the buying frenzy is being fueled by consumers who are worried people are becoming so desperate and unpredictable, they need to ensure they can protect themselves.

Albright’s Gun Shop at 36 E. Dover St. in Easton has been a staple of the community since Larry Albright bought The Gun Shop over 35 years ago. Other than for special occasions like the Waterfowl Festival, the shop is closed on Sundays.

“Due to unprecedented demand for guns and ammo, we will be open this Sunday from 11-2. Presently, we still have 9mm and 223,” Albright wrote in a message posted to the shop’s Facebook page.

He opened up his shop on Sunday, March 22, to serve potential customers in need. They had been messaging Albright on Facebook and calling the store nonstop about the availability of guns and ammunition.

“I’ve had people from north of Baltimore, Northern Virginia and over in Delaware contacting me, saying they can’t make it here until the weekend, will I be open on Sunday,” Albright said. “They found out we were one of the few stores that still had ammo.”

Albright said most of his customers are first-time gun owners — people who are looking at uncertain times and realizing they want a little bit of protection. He said women have been a greater-than-average number of his customers, especially as many are home with the kids who are out of school.

“It’s not really panic buying. It’s more that people are realizing that they don’t have something in their house for defense,” Albright said. “Our biggest market right now has been several hundred people who have never bought a gun before. They’re home and realize they want more protection than a baseball bat.”

He pointed to a gun rack in the middle of the store and to the rack on the wall behind him.

“This is it,” Albright said. “What you see is what I’ve got. I’ve never had the racks this empty.”

Albright said customers were calling to buy items before they’d arrived in store, especially rifles. The long guns don’t require the Maryland State Police background check and seven-day waiting period, which makes them especially popular for those wanting added home protection sooner rather than later. Once customers pass the NICS background check, they’re allowed to proceed with the purchase of the gun and leave the store with it the same day.

Other owners around the Mid-Shore echoed his sentiments. A Mid-Shore gun store owner who requested not to be named said requests are flooding in.

“I’ve never seen demand like this,” he said. “My phone won’t stop ringing. It’s guns, it’s ammo, it’s everything. And it’s nationwide — everyone is sold out.”

A worker at another Mid-Shore shop said their ammunition inventory has been dwindling and they’d never seen it so low.

Rob Kramer, owner of REK Firearms in Cambridge, said they’ve been inundated with sales during the past week.

“It’s been ammunition in particular, but there are also a lot of first-time gun buyers, too,” Kramer said. “They just don’t feel safe right now.”

Supply hasn’t been able to keep up with demand.

“We’re depleted,” Kramer said. “And it’s not just me, I talked to several gun store owners over the weekend, and we’re all overwhelmed.”

This demand echoes demand seen across the nation in the past few weeks. Industry experts say sales have spiked in a matter of days. Some of the purchases are made by people buying their first firearm. Others are existing gun owners adding to their collection or stocking up on ammunition after seeing grocery stores depleted, schools closed and big events canceled.

Even online sites are reporting increased demands. Ammo.com has reported sales up nearly 70% from Feb. 23 to March 4, over the previous 11 days of sales.