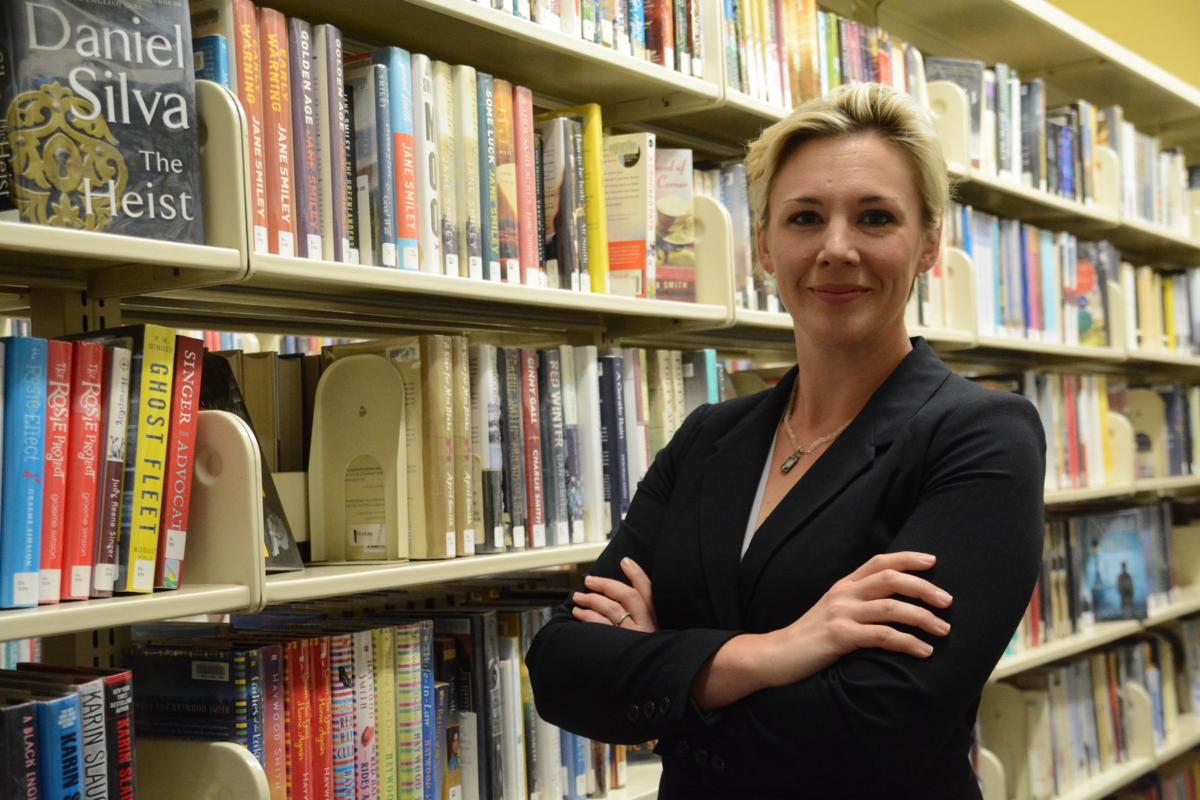 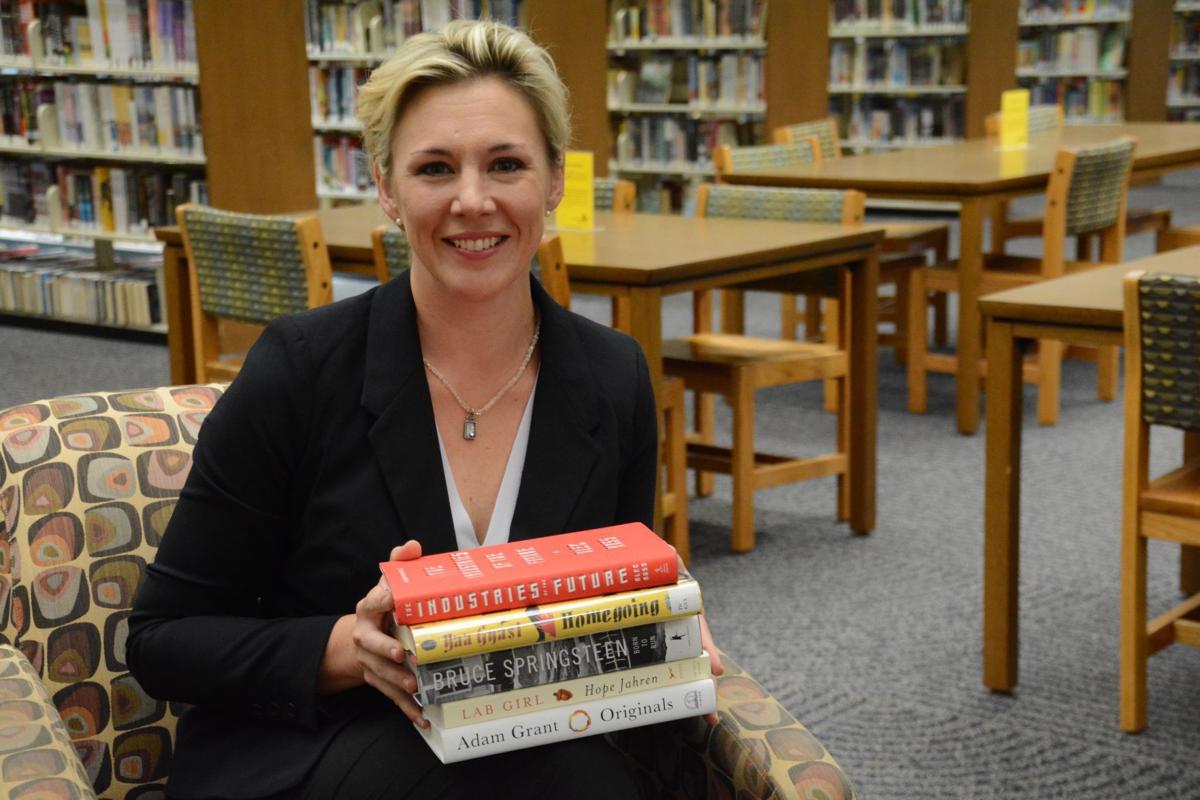 Morgan Miller, new CCPL director, poses with a few of her favorite books from the past year.

Morgan Miller, new CCPL director, poses with a few of her favorite books from the past year.

ELKTON — For Morgan Miller, becoming the Cecil County Public Library director was both a job she was destined for and one she never dreamed she’d hold.

Miller grew up in the Calvert area and got her first library card at the Elkton library when she was 6 years old. Although Miller said she can scarcely remember a day in her life when she wasn’t reading, she never considered a career in libraries.

After graduating from Rising Sun High School, she went to University of Maryland College Park, where she majored in English. After graduating, she worked in publishing and did travel writing while also teaching writing to English as a second language students at UMD.

Miller moved back to Cecil County when she was in her mid-20s, figuring she would apply to graduate school. Meanwhile, she took a part-time job working the information desk at the Elkton library.

“Within six months of working in a library, which was never a career I had considered before, I was absolutely hooked,” she said. “It combined my loves of learning, teaching, public service and books into absolutely the perfect career.”

That part-time job kicked off an 11 year career at CCPL, which culminated last week with Miller being appointed director of the county library after serving as the interim director since July. Miller took over the director job from Denise Davis, who held the job for 15 years and who Miller considers both a personal and professional mentor.

The little over a decade Miller has spent at CCPL has been busy. She started her career managing the Cecilton branch library before helping launch the new Perryville branch as the adult services supervisor and then becoming the manager soon after it opened. During her time at Perryville, Miller and her staff focused on embracing the veterans community by using the branches services, classes and resources to help the veterans — many of whom come from nearby Perry Point VA Medical Center — achieve their goals, she said.

After that she returned to manage the Elkton branch for three years, overseeing the redesign of the branch that saw the creation of the popular cafe area and expanded teen space. Miller spent the last three years as assistant director of public services before being appointed interim director in July.

Now with the permanent director title, Miller has several goals for the upcoming year and beyond. One of the most pressing is preparing to build the new North East library. Design is set to start next fall, but in the meantime there will be lots of work to do evaluating other library buildings, researching what other systems are doing and figuring out how to create a library that best reflects the needs of the North East community, Miller said.

“That takes a lot of care, hard thinking and a lot of listening to and working with the community,” she said.

In the longer term, Miller also hopes to strengthen partnerships with other educational institutions in the county, particularly Cecil County Public Schools and Cecil College. Together, these three organizations play an important role in helping students and developing a workforce that will want to stay in the community, Miller said.

But Miller hopes to reach people not connected to traditional learning centers as well and continue to make the library an “on-demand learning center.” That includes self-directed learning products such as Gale Courses and the newly-added Rosetta Stone software as well as more traditional means such as books, classes and help from the library’s professional staff, such as in the form of the Small Business Resource Center, she said.

“When you look at libraries in the scope of education, we really want to empower all learners in the community,” Miller said. “The library is the community’s knowledge base and the go-to-place to learn these kinds of skills.”

As ambitious as those goals may be, they come at a time when the library is trying to reach an even higher level of achievement. In 2015, CCPL was awarded the Institute of Museum and Library Sciences National Medal, the highest recognition a library can earn.

But while the national medal was a great achievement, Miller said it’s only the beginning for CCPL. She recalled a Washington Post article from a few years ago where Mark Zuckerberg, the founder of Facebook, was interviewed about his company at a time when many people believed Facebook had reached the pinnacle of its success. At the time, Zuckerberg said something like, “Facebook’s story is only 1 percent told,” Miller recalled.

“I think you can draw some parallels between that statement and the Cecil County Public Libraries,” she said. “We are more focused on the promise of the future and what’s to come. We have a much longer and larger story to tell.”

When new CCPL director Morgan Miller isn’t working or taking care of her two young kids, she’s reading. Exactly what she’s reading depends on the format, she said. She reads all her fiction books in print but in the car she listens to audiobooks on topics such as management, business and leadership. When she’s around the house, she’s usually using Hoopla, a digital streaming service, to listen to audiobooks on historical topics.

But some of her favorite books are ones she first discovered as a kid including Beverly Cleary’s Ramona Quimby series, which she still re-reads every five years or so, and Roald Dahl books. Her all-time favorite book though, may be "As I Lay Dying" by William Faulkner.

More recently her favorite books from the past year are: "The Industries of the Future" by Alec Ross, "Homegoing" by Yaa Gyasi, "Lab Girl" by Hope Jahren and "Originals" by Adam Grant. Miller, a huge Bruce Springsteen fan, also hopes to add Springsteen’s new autobiography to that list when it comes out next week.