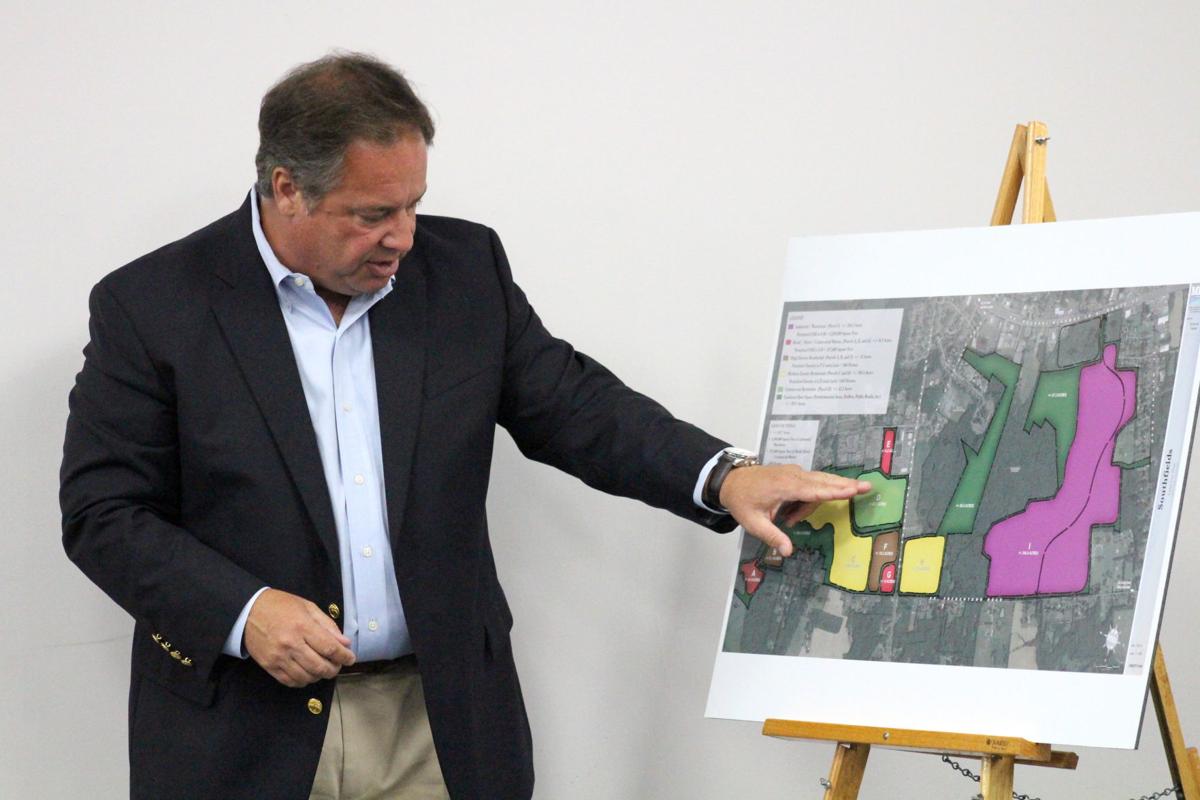 Ray Jackson, principal owner of Stonewall Capital, looks over a map of the proposed types of development south of U.S. Route 40 in Elkton, during a July 31 press conference. He will host a public informational meeting on Aug. 28 in Elkton. 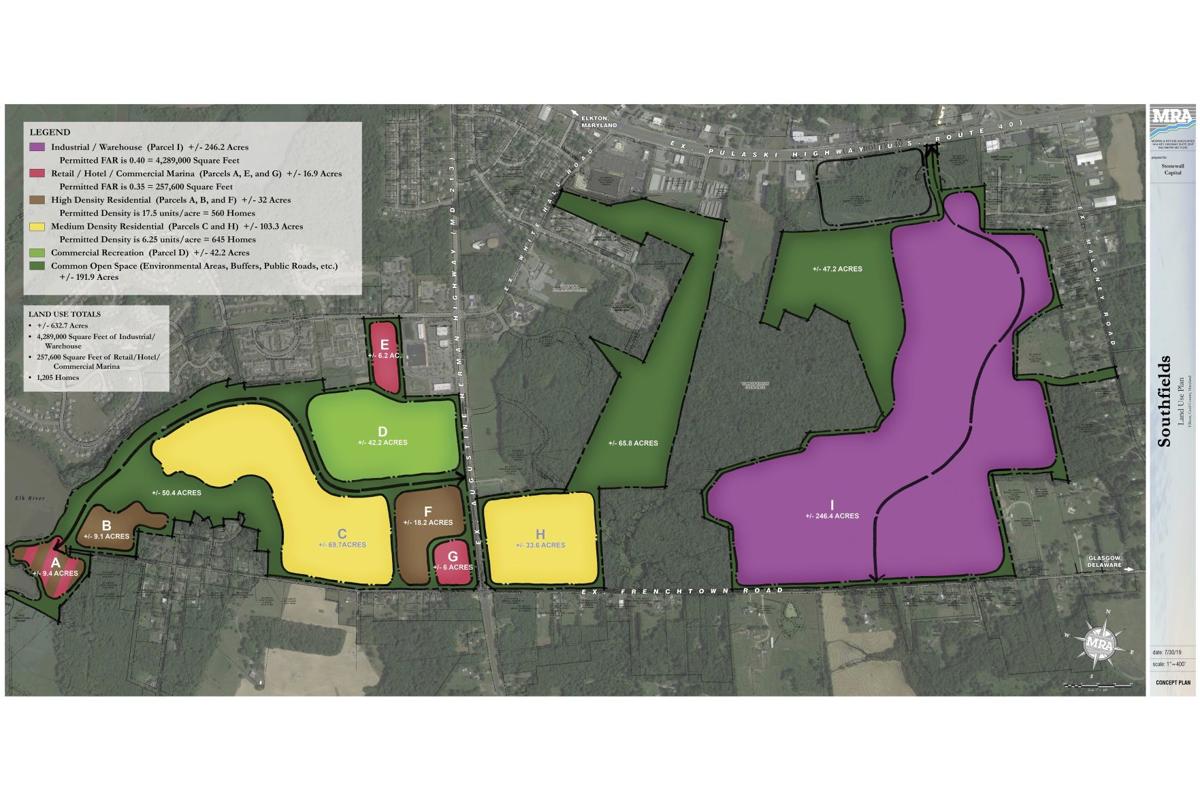 Stonewall Jackson has a long way to go through Elkton's planning process before its planned PUD is built.

Ray Jackson, principal owner of Stonewall Capital, looks over a map of the proposed types of development south of U.S. Route 40 in Elkton, during a July 31 press conference. He will host a public informational meeting on Aug. 28 in Elkton.

Stonewall Jackson has a long way to go through Elkton's planning process before its planned PUD is built.

ELKTON — With questions and concerns still lingering on a planned use development (PUD) proposal for south Elkton, town officials are reassuring residents that the project has a long way to go before it breaks ground.

“We’re in the infancy of this process,” Elkton Planning Commission Chairman David Wiseman said Monday night. “But it’s crucial that people are involved.”

Southfields — a PUD envisioned with a mix of industrial and commercial use, upward of 1,000 homes, and a sports park — is tentatively planned for 650 acres between Whitehall and Frenchtown roads with hopes to break ground in 2020. Stonewall Capital, the contract purchaser of the land, is hosting a community meeting about the project on Aug. 28 to answer questions and concerns from the public.

Elkton Planning Director Jeanne Minner emphasized this week that before the Southfields concept is approved, it has to go through several hearings with the Planning Commission and the Elkton Board of Commissioners before both bodies can vote on it.

The first step is that the town has to amend its zoning ordinance to allow PUDs in the first place.

In the past, Elkton had language defining a PUD overlay zone in its zoning ordinance, but it was removed at some point through the years. At the moment, the Planning Commission is looking over some proposed language on PUDs suggested from attorneys for the town and Stonewall Capital.

“They want to provide input into the PUD process because they really want their project to be a success, but we’re looking at it from the town’s point of view. We’re trying to make sure we protect quality of life, health, safety and welfare,” Minner said on Monday.

The Planning Commission has yet to settle on PUD language, but once it does, a proposed amendment to the zoning ordinance will come before it for a public hearing and a vote.

If the Planning Commission approves an amendment to the zoning ordinance, it then goes to the Mayor and Board of Commissioners for a public hearing. After the public has its say before them, the board can vote on it. Ordinances, including amendments to existing ordinances, become effective 20 days after the board’s approval.

That entire process could take one month or longer. The commissioners would hold a vote on the ordinance’s second reading, which is at least two weeks after it is initially presented and a public hearing is held.

If the zoning amendment is approved, Stonewall Capital and other Southfield developers would then have to apply for the PUD overlay — triggering another round of meetings before the Planning Commission.

Even though it is properly zoned, Southfields, like any other project in Elkton, would have to continue to come before the Planning Commission for concept, preliminary and final design plan approvals.

At Monday night’s Planning Commission meeting, a group of residents that surround the proposed PUD came out with their lingering concerns. John Conolly said that he came out to learn more about the town’s process, since he was against the previous plan for 2,500 homes there about a decade ago.

“I just want to make sure that the public is aware of it and involved in it, because we’re the ones that have to live with this legacy project,” Conolly said.

Others like Daria and Rose Brown, a daughter and mother who live on Frenchtown Road, came to express their concerns about the project. Daria Brown said that they fought this project when Bruce Schneider, who first owned the land, planned for thousands of homes.

“No one on Frenchtown was even aware that something like this was coming down the road. I would think that somebody would have at least let all the people on Frenchtown know. There’s maybe about 30 of us on one side,” Daria Brown said.

She shared her concerns about a possible buffer between the Frenchtown Road homes and the suggested development. Her mother Rose Brown, who has lived on Frenchtown Road since 1947, outlined the natural beauty of the land and its history.

“I like neighbors, and it would be wonderful to have some homes, but everything is so tight and clustered, so that’s not going to happen,” Rose Brown said. “And [Route] 213 on a Friday night, forget about it. It’s a parking lot all the way to Cecilton.”

Wiseman assured the residents that this project was still taking its first steps, but that he would take their concerns under advisement moving forward.

“I don’t want to be the one to sign the print that makes 213 a parking lot for my children, grandchildren, whatever the case may be,” he said. “I’m looking at this as the chairman of the Planning Commission as well as a concerned citizen, because I have a whole slew of questions.”

Stonewall Capital’s informational meeting is set for 7 p.m. Aug. 28. The meeting will be held in the community room on the second floor of the Elkton Municipal Building, located at 100 Railroad Ave. in Elkton. The town is encouraging the public to attend.