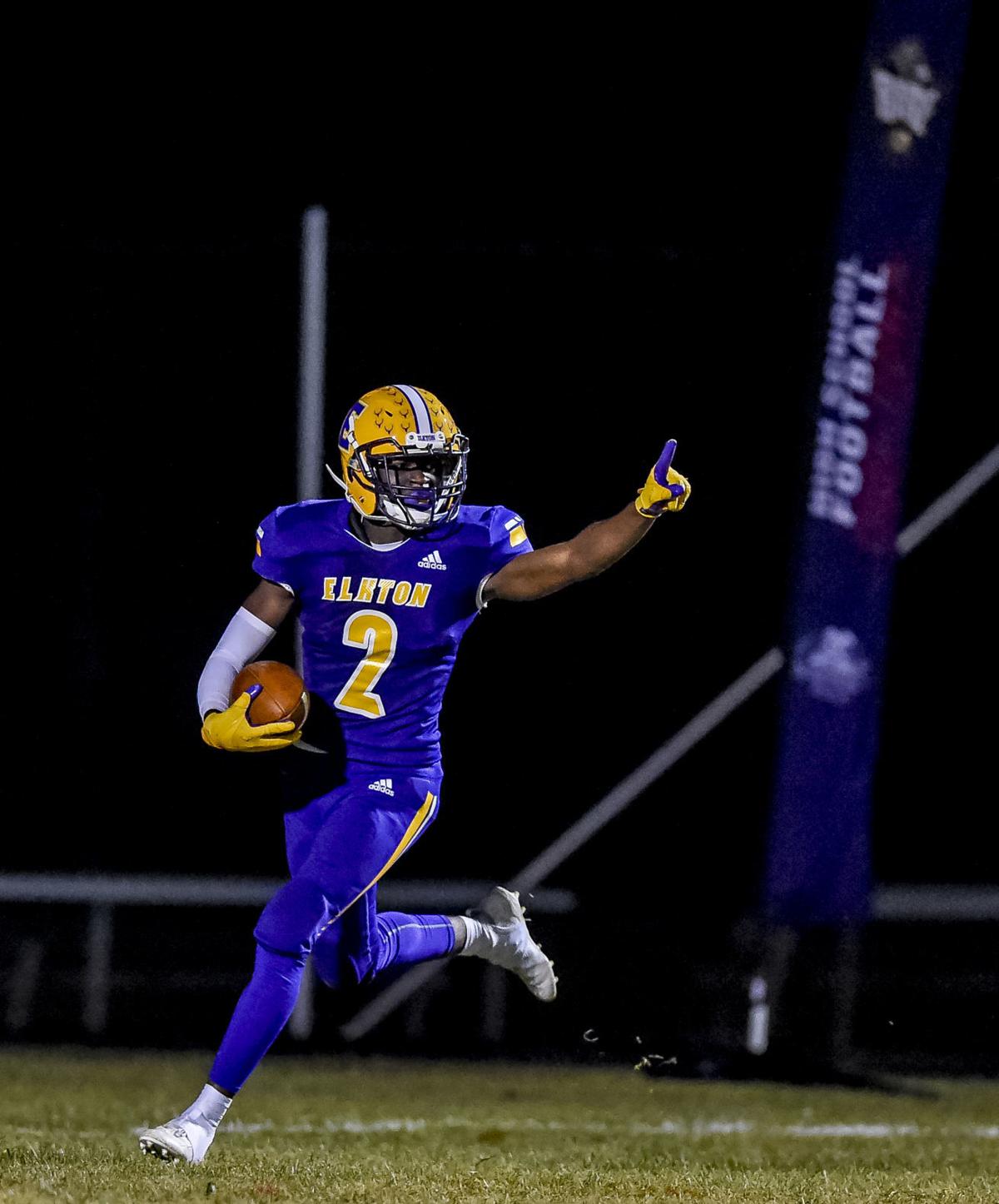 Jakeem Jackson celebrates after returning an interception for a touchdown during Elkton’s 31-14 win over visiting Oakdale Friday night. 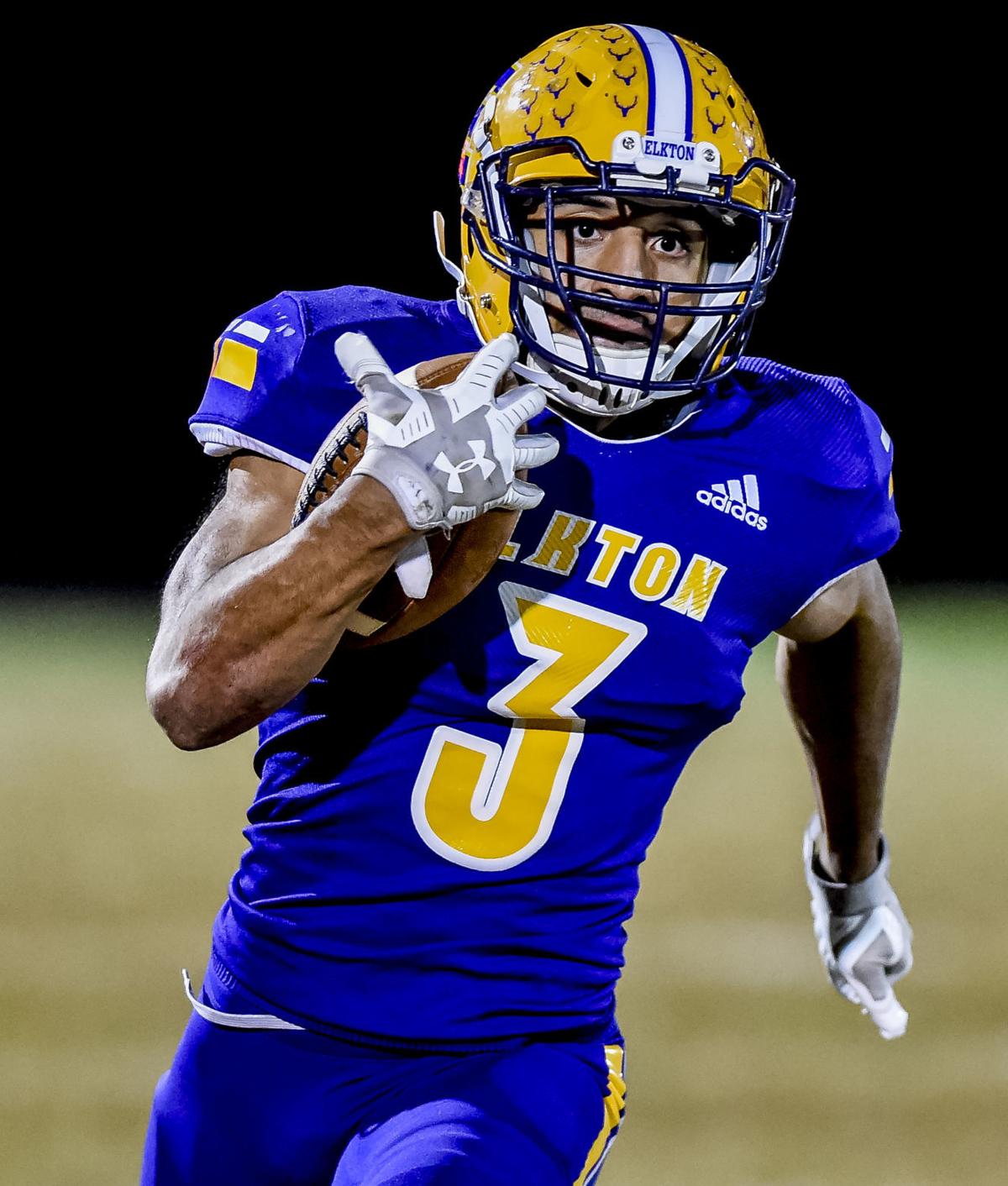 Elkton running back Tashawn Watters runs with the football during the Golden Elks’ 31-14 win over visiting Oakdale Friday night.

Jakeem Jackson celebrates after returning an interception for a touchdown during Elkton’s 31-14 win over visiting Oakdale Friday night.

Elkton running back Tashawn Watters runs with the football during the Golden Elks’ 31-14 win over visiting Oakdale Friday night.

ELKTON — It was only a matter of days before members of the Elkton football team returned to the weight room after last season ended.

The year had ended a game earlier than it was supposed to. The Golden Elks fell one game shy of the reaching the 2A state final with a 38-0 loss to Oakdale.

“We all were hungry for Oakdale,” senior Tashawn Watters said. “Literally the week after we lost, we were back in the weight room. We talked about it every week since then. This football season, we were focused on the teams that we played that week, but we were definitely bringing it back to this game because we knew this was going to be our toughest game of the regular season. We were looking forward to it all season, we finally got it.”

Elkton finally got to satisfy its hunger for Oakdale Friday night, defeating the visiting Bears, 31-14 in a statement win for the program.

“I’ve been waiting on this for 10 months,” senior Jakeem Jackson said. “It was a hard loss last year, 38-0. My mindset all year was ‘Beat Oakdale.’ Now, we’ve got to finish, keep grinding, keep working like this week never happened.”

Oakdale has built its brand on physical play. Elks coach Matt Feeney knew to beat the defending 2A state champions, his team would have to match their level of physicality. He said Elkton’s defensive performance was among the best he has seen in a long, long time.

“Our guys just flew around. They weren’t going to be denied an opportunity to kind of stamp themselves as a legit player in the 2A again. They wanted people to know that they’re back. They wanted to play fast. They wanted to play as physical as Oakdale,” Feeney said. “We knew that that’s a physical football team, and to play with them, you’ve got to match them physically for four quarters. They’re disciplined. They make their own breaks – the tip-pass touchdown, I’ve seen that on film from them so many times. But we rallied and that’s the mark of a good football team.”

The touchdown catch off of the tipped pass followed a 90-yard touchdown drive from Elkton to open the scoring late in the first quarter. Gregg Triplett finished the series with a 7-yard touchdown run one play after quarterback Nolan Null completed to wide receiver Michael Vass for a gain of 42 yards.

The Bears responded less than a minute later, as Cameron Dorner hauled in a 57-yard touchdown pass from quarterback Ethan Reifer after Watters had managed to get a hand on the football in coverage.

Oakdale’s first touchdown came with 1:23 left in the first quarter. The Elks then held the defending state champions scoreless until a meaningless touchdown was scored with less than 30 seconds left in the game.

“That was just guys stepping up doing their jobs,” Watters said. “Last year, we had young guys. They were all sophomores last year, so of course they made little mistakes their first year on varsity. This year, they fixed it. The hard work in the offseason really paid off. Everybody was assignment sound and we got it done.”

Watters had a sack in the opening minutes of the second quarter on an Oakdale fourth-and-goal that drastically swung momentum. He ended the Bears’ following drive with an interception and nearly had a second pick later in the half, but it was ruled to be an Oakdale completion in a head-scratching call.

Watters finished with three sacks from the safety position, tied with defensive tackle Ronan DePaul for the team lead.

“We moved [DePaul] inside. We had him playing some 3-technique, some nose guard. He’s just a load. He plays almost two gaps,” Feeney said. “When you can get that and you’ve got linebackers that can fill on the fly, it’s a luxury. I can think of everyone on the defense making a big play at some moment. Tyler Barbara, Kharee Stephens, Jakeem’s pick-6, Mike Vass out there breaking balls up, Tashawn’s non-interception, which was an interception. Everyone contributed, and then Jake [Bosler is] out here banging extra points like he does. Right now, it’s fun.”

Elkton scored 10 points in the final four minutes of the first half to take a 17-7 lead into the locker room. Senior Trevin Ewing’s gutsy decision to field a punt off of a hop at his own 5-yard line resulted in a 95-yard return that put the Elks in the lead for good.

“I did for a moment, but if he picks it up clean, anything can happen with Trevin,” Feeney said, admitting to briefly – very briefly – question Ewing’s risky choice to play the ball.

Bosler then drilled a 31-yard field goal as the half expired that was set up by a 50-yard run from Watters.

Neither offense managed much for most of the third quarter. Elkton eventually grew its lead to 24-7 with 2:33 left in the period as Null found Vass for a 16-yard strike.

The fourth quarter followed a similar trend with both teams playing scoreless football until Jackson intercepted Reifer and returned it 65 yards to the end zone to put the finishing touch on a statement win for the Elks.

“When I saw the ball, I just knew I had to go. I had to go close the game out. It felt good to catch that ball and just run,” Jackson said. “We got a big target on our back now, but that’s what we want.”

As Elkton celebrated postgame, players told one another that they had “Woke the state up.” If anyone had been sleeping on the Elks, they certainly aren’t anymore.

The season-defining win came only hours after Elkton players had attended funeral services for their assistant coach, Ed Brown.

“They love that man. We love that man. He was a part of the fabric of our program,” Feeney said. “Losing him and having his service today was just emotional. Not a lot of kids – not a lot of football teams – experience something like that during a season. It’s a rare thing. It shook us, but we rallied around his son, Ian. They just played for each other, they played for Coach Brown.”

The 17-point win Friday night was the closest margin in a game yet for the Elks, who never looked past an opponent and ahead to the state semifinal rematch over the season’s first four weeks.

“Honestly, we haven’t experienced it. It’s been eery almost. When are they going to take that step back? I don’t see it happening. This team, they care. They take pride in that number on the scoreboard,” Feeney said. “They’re hungry. This is my biggest senior class I’ve had yet, they’re excited to get some recognition. They play well together and they care about each other. It’s a good vibe with this team.”