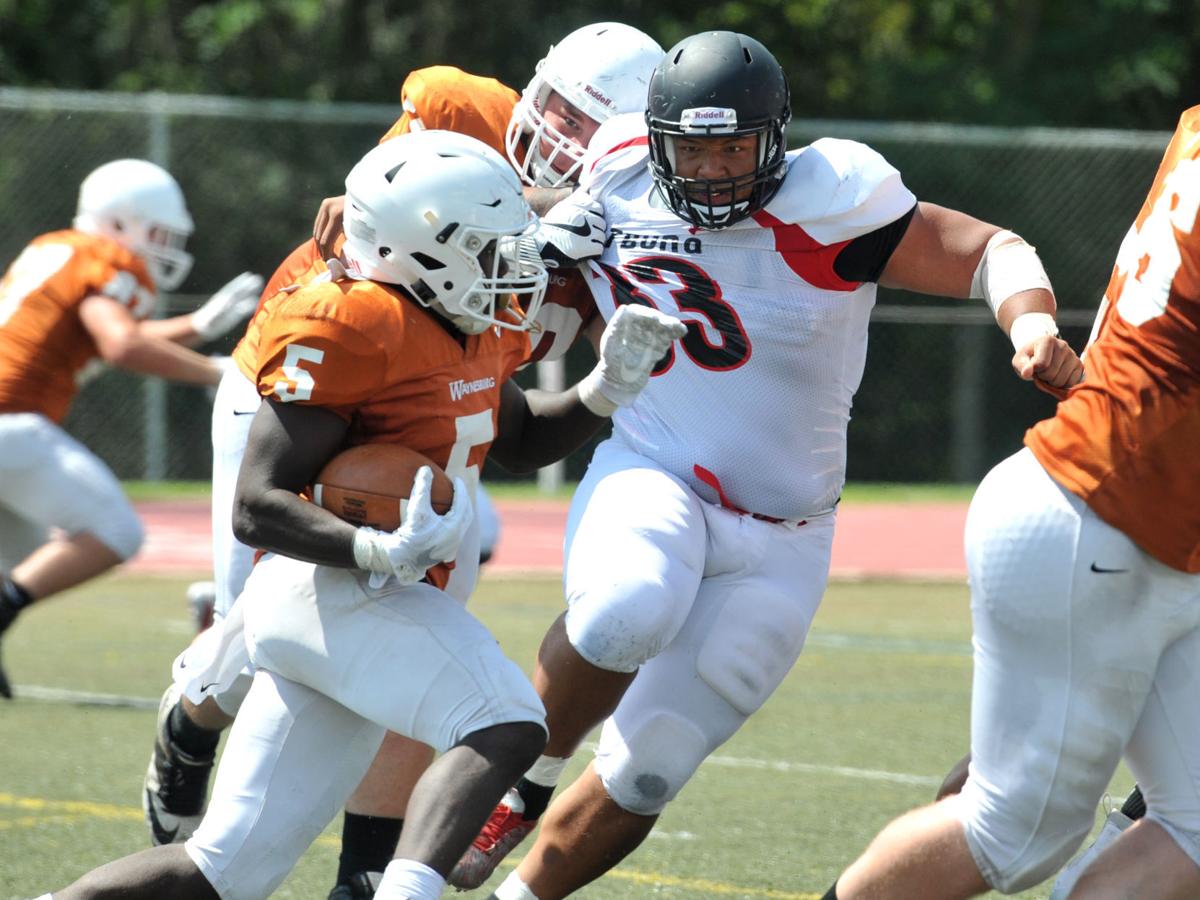 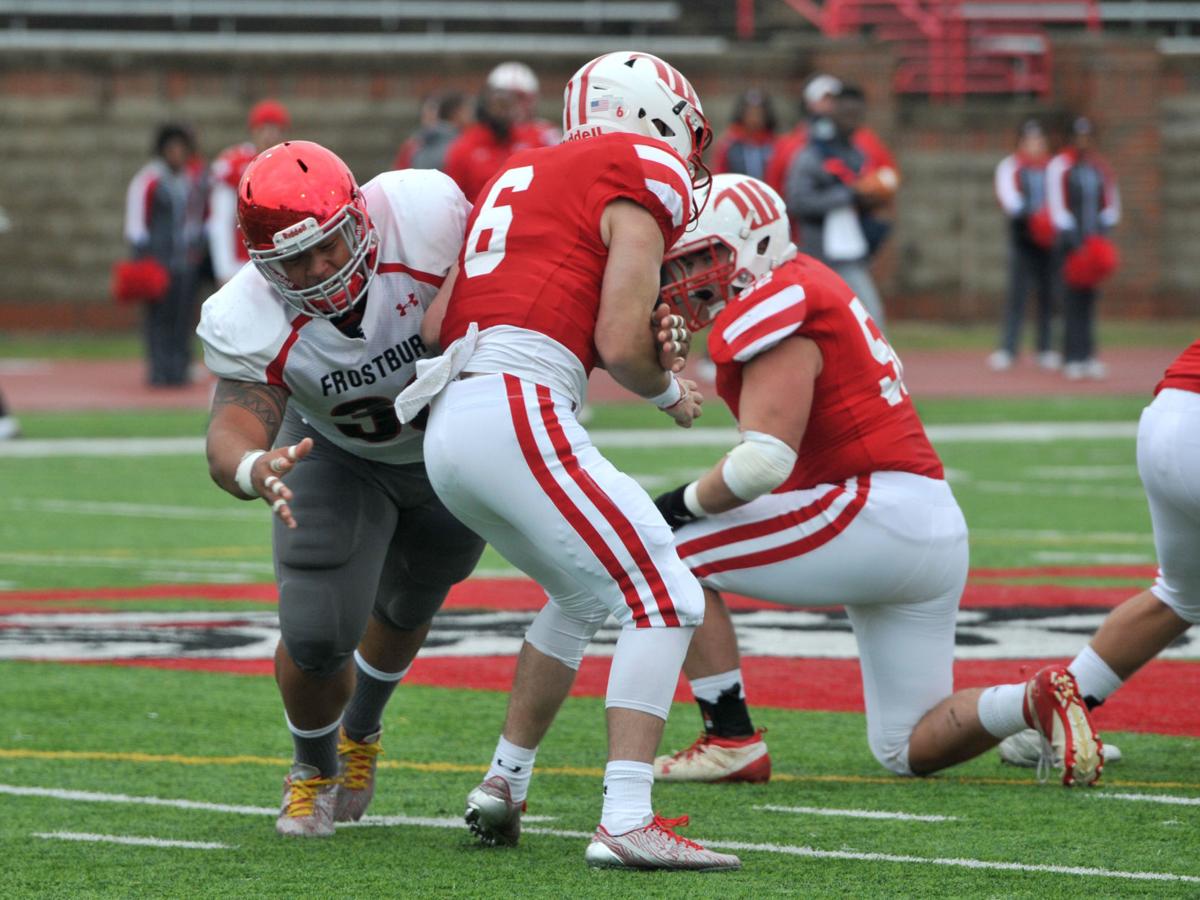 Most likely headed 60 miles further down Interstate 68 to Morgantown, home of Big 12 powerhouse West Virginia University, a steady stream of professional recruiters were flipping on their turn signals and taking the lone exit off the rural highway in western Maryland to observe the play of the one-time standout from Elkton High who ha caught their attention.

“Being from [Frostburg], you have to do some extraordinary stuff to get noticed. You have to be comparable to Division I guys… who are off the charts or way above average. You have to constantly be on your game and you can’t take games off. If you’re not doing something extravagant, then the scouts aren’t going to come look at you at a Division III school. You have to give them a reason,” Scott said. “That’s the advantage I have over the bigger-school guys because they could have possibly taken a game off or taken a rep off, where with me, it was constant. You can’t take a rep off. If you take a rep off, that’s the chance an NFL scout will bypass you and go right up the street to Morgantown or something like that.”

Scott, the 2013 Cecil Whig All-County Defensive Player of the Year, spent the winter months since the conclusion of his college football season training in Port St. Lucie, Fla. in preparation for Monday’s pro day at Temple University in Philadelphia, where he will perform a series of workouts before a crowd of NFL talent scouts. A strong performance may persuade an NFL team to select Scott in next month’s draft or sign him as a free agent.

The Cecil County native may be from the smallest school of all the NFL hopefuls filing into Temple’s football complex, but at over 300 pounds with a clocked 40-yard dash under five seconds, Scott will have no trouble standing out.

“Niles’ ability to run the way he runs at 300 pounds puts him in an elite category. Three hundred-pound people can’t carry the weight and can’t run the way he runs with it,” Frostburg head football coach DeLane Fitzgerald said. “If he has a good day Monday at Temple, he’s going to get drafted on Day 3 of the draft. And if he doesn’t do good on Monday, he’s still going to be a preferred free agent. There is a ton of interest now. He’s going to be on somebody’s NFL roster in May, June and July. What he does then will determine how long he stays on it.”

Scott’s pro day comes two months after he started in the FBS All Americans Tropical Bowl in Daytona Beach, Fla., a premier college senior all-star game that Fitzgerald labeled “the third or fourth-best NFL scouting bowl.” Scott’s invitation followed a senior campaign in which he totaled 16.5 tackles for a loss, 10 sacks and 51 total tackles, earning him a spot on the AP Little All-America First Team, the D3football.com All-America Second Team and the title D3football.com All-East Region Defensive Player of the Year.

He was just one of three Division III players asked to play in the Tropical Bowl. Since the bowl’s inception in 2016, more than 100 of its alumni have gone on to play in the NFL.

“I give it to all the people that were there to help me along the way. Not just to the Tropical Bowl, but all the way up to the point that put me in the position to get a starting spot,” said Scott, who refused to go home during the summer between college school years, opting instead to stay at Frostburg to train. “It’s a testament to the hard work that you put in, especially during the season, off-season and with the strength program at Frostburg.”

Hard work as come to define Scott, whose dedication was evident both on and off the gridiron, according to current Elkton head football coach and teacher Matt Feeney, who was a defensive coordinator in the program in 2013.

“I actually had Niles in class for one year, and what was really great about having him was getting to watch just how hard of a worker he truly is. I remember this class vividly because I had some real strong personalities in this class, and it could have gotten real easy to get wrapped up in that, but Niles just came in, opened his book, did whatever the assignment was and participated. He was as hard a worker in the classroom as he was on the field, and I think it just says a lot about his character,” Feeney said. “On the field, you knew what you were going to get. There was never any off days, he just came out and performed at his highest ability level every single game and practice. He pushed himself, and the thing that really stood out to me and [then head coach Sean] Lenz was that Niles was very coachable. He was very receptive to what you were teaching him. I know [current Elkton defensive coordinator] [Dick] Achuff really enjoyed having him on the defensive line and really enjoyed working with him because whatever he would throw at Niles, Niles would apply it.

“The little things that we might have given him in high school, he worked with. Then, when he got to Frostburg, he definitely learned a lot more and applied it there to go on to become an All-American.”

Fitzgerald received a player that would go on to become a two-time captain with the Bobcats. Scott, who weighed 255 pounds as a freshman defensive end, gained weight and transitioned to tackle prior to his sophomore campaign. From there, he grew into one of the top defensive linemen in the country.

“He’s just a different player on film. More explosive than a lot of kids you normally see on film. He was just a difference-maker at Elkton High School. We were fortunate enough to win some recruiting battles and get him to school here,” Fitzgerald said. “His sophomore year was a learning experience for him. He played well, but he will tell you, and our coaching staff will tell you, that he was learning the position. Then he comes out as a junior and has an All-American season and, by then, he’s up to about 300 pounds. Then he comes back at 314 [pounds] as a senior and has another All-American season and is the best defensive lineman in Division III football.”

With the hard work behind him, Scott will lace his cleats up Monday hoping to keep his football career alive. Along with the 40-yard dash, he will take part in a series of physical exercises and position-related drills that will allow organizations to build a more accurate draft profile that they will combine with highlights from his playing career.

If all goes well, he will hear his name called during the NFL Draft taking place April 26-28 in Arlington, Texas.

“My mindset is just to have fun with it,” Scott said. “You’ve been getting out in the mud for about two months now, working as hard as you can to get your body in the best shape it can possibly be in. You already put the work in, you already put the tiring, long hours in, now it’s time to go out there and show off, show people what you’ve got and have fun with it. That’s the reason why we play football. The whole process has been a blessing.”

Few athletes from Cecil County have turned professional in any sport, but Scott aims to follow in the footsteps of former Elkton graduates Larry Webster, Sr. and his son, Larry Jr., who were both drafted to the NFL. Larry Jr. most recently was taken in the fourth round of the 2014 NFL Draft by the Detroit Lions as a defensive end. He is currently a free agent after spending a portion of last season with the Tampa Bay Buccaneers.

No matter the outcome Monday, Scott hopes his journey has made it easier for local players to get noticed by colleges.

“I really feel that a lot of my motivation comes from being from Elkton. From seeing how people grow up around Elkton, from seeing so many good athletes not get a chance to make it because the school is small or kids falling by the wayside and getting into the wrong things. A lot of my motivation comes from that. It’s one of the things that drives me,” Scott said. “If I can somehow make the path a little bit easier for somebody else who comes after me, that would be a tremendous goal for me right there.”