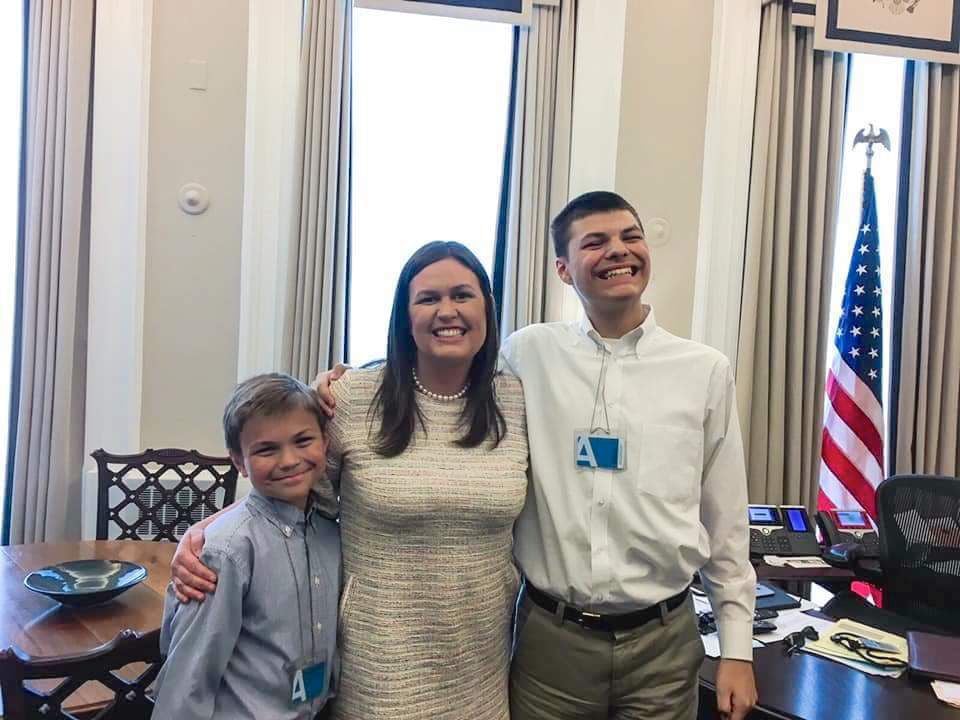 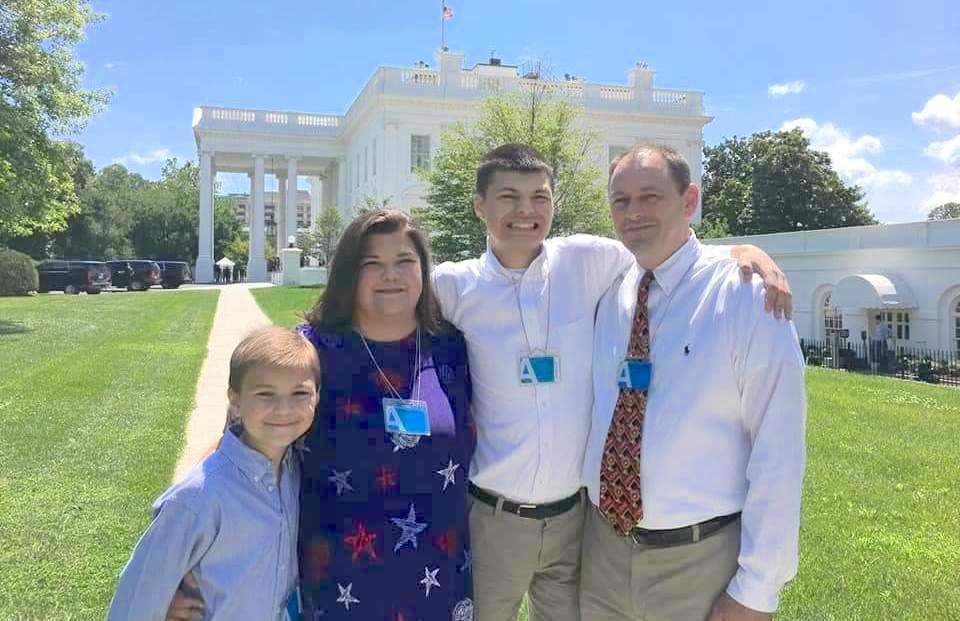 Michael and Megan Halter pose with their children — Matthew, 17, and Mason, 10 — outside the White House. 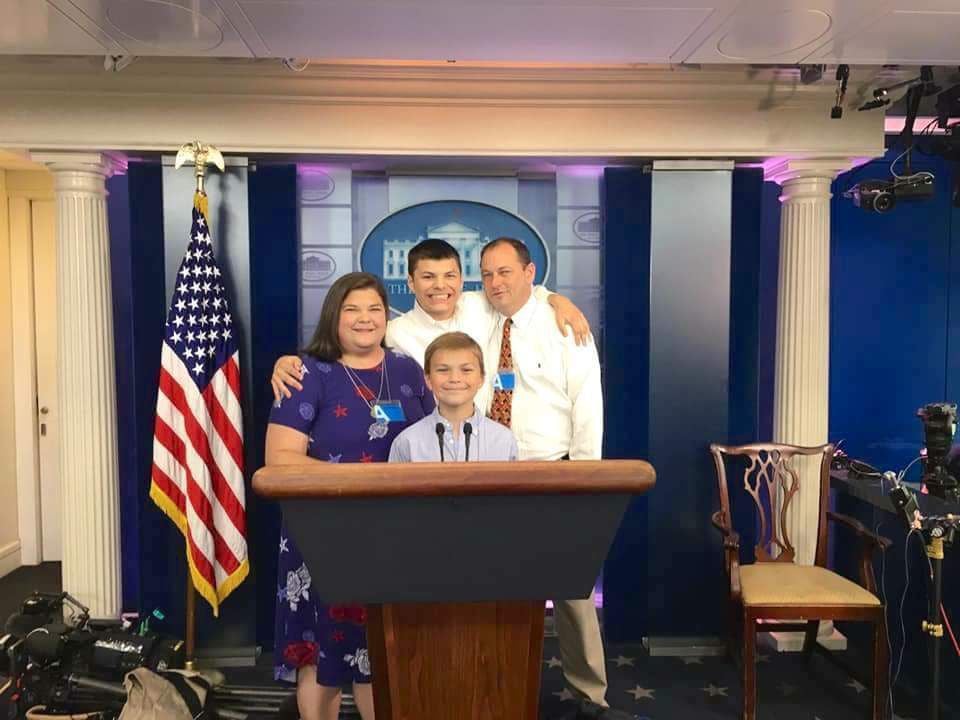 Michael and Megan Halter pose behind the podium in the White House pressroom with their children, Matthew, 17, and Mason, 10.

Michael and Megan Halter pose with their children — Matthew, 17, and Mason, 10 — outside the White House.

Michael and Megan Halter pose behind the podium in the White House pressroom with their children, Matthew, 17, and Mason, 10.

But for Elkton resident Matthew Halter, 17, it is White House Press Secretary Sarah Huckabee Sanders who is perched high upon a pedestal.

So it was like a dream come true for Matthew when he and his family were able to spend some time with Sanders inside her office recently during a scheduled meeting that was part of their special White House tour.

Matthew was accompanied by his parents — Michael, who is an Elkton-based lawyer, and Megan, a special education attorney in Pennsylvania — and his brother, Mason, 10. The special White House tour and meeting with Sanders occurred during the family’s vacation in the nation’s capital.

“She spent about 15 minutes with us and she couldn’t have been any more gracious. She’s very personable. She asked Matthew and Mason how old they are, where they go to school and things like that,” Michael said. “We’re still on Cloud Nine.”

An autistic Elkton High School student who is fervently interested in and remarkably knowledgeable about politics, Matthew is very familiar with what Sanders does for a living. He’s been watching her in action for quite some time.

Having been briefed on Matthew’s great interest in her and in what she does, Sanders extended him a playful offer after self-deprecatingly expressing surprise that anyone could so faithfully watch her press conferences.

Michael noted that his family’s meeting with Sanders took place a few days after a restaurant owner in Virginia had denied Sanders service because she works for President Donald Trump, whose policies the restaurant proprietor doesn’t support.

Matthew has a bit of a crush on Sanders — to the point that, when prepping him on what to say to Sanders, his parents steered Matthew away from asking her to marry him.

“Matthew adores her. He knows her husband’s name is Bryan. Sometimes he says, ‘I will unseat Bryan,’” Michael said, chuckling. “We told him he definitely couldn’t say that to her.”

As it turns out, a starstruck Matthew was nearly speechless when he first laid eyes on Sanders in person.

The meeting went well. Sanders chatted with the Halter family, posed for photos and even let them walk around in the White House pressroom, where she presides over the press conferences that are so riveting to Matthew.

“The room is a lot smaller than it looks on TV,” Michael noted.

The special tour and meeting with Sanders was far better than what the Halters originally envisioned while making their vacation plans.

Knowing they wanted to take the basic White House tour, Megan contacted her friend from college, Jill Hershey, who is a D.C. lobbyist in the financial arena, to help make arrangements. Hershey learned that Megan’s request was too late, however, because White House security needs at least 90 days notice, allowing time for background checks.

After giving the disappointing news to Megan, Hershey brought it up to Shahira Knight while having dinner together. Knight, as deputy director of the National Economic Council, serves as President Trump’s top economic advisor. (She is in the process of leaving the White House to work for a bank lobbying group.)

Knight was able to expedite the background checks and arrange for her to give the Halters a special White House tour, including the meeting with Sanders, who, despite her busy schedule, accommodated them.

“Shahira told her (Sanders) all about Matthew,” Megan said. “We had to be flexible. They gave us a one-day notice and told us where and when to go.”

Touring the West Wing, which occurred before the meeting with Sanders, was a heady experience for all of the Halters, not just Matthew. It included the Roosevelt Room and other well-known White House spots.

At one point, the Halters found themselves walking in the Rose Garden, outside the Oval Office.

Although they never saw Trump, the Halters did spot his daughter.

“I looked up and there was Ivanka Trump walking down the hallway toward us, maybe 15 feet away. Then she made a quick 180-degree turn, like she forgot something, and headed in the other direction,” Michael remembered.

While waiting in the lobby to meet Sanders, who was still in the Oval Office with Trump, the Halters were in some pretty important company.

“There was a gaggle of guys in suits. I asked (Knight) who is that gentleman with his back to us, because he looked familiar. It turns out it was (South Carolina) Sen. Lindsey Graham. We were told those men were members of the Senate Appropriations Committee and they were waiting to talk to the president,” Michael said.

His parents recognized a few of the senators; Matthew recognized them all — and then some.

“He started rattling off all the names of the senators there and their states. He was like, ‘That’s Senator so-and-so and he serves on this committee or that subcommittee.’ He knew everything about them. Shahira was impressed,” Megan said, adding matter-of-factly, “Matthew is a genius.”

How much does he love politics?

“Ask Matthew what he wants to be and he’ll tell you he wants to be President of the United States someday. We tell him, ‘Matthew, you might want to aim a little bit lower.’ But then again, if he wants to be president, why not?”

They are so lucky to meet such a strong woman. She is truly a positive example of a genuine straight shooter for boys and girls in the U.S. And her dad is the best Governor of Arkansas since reconstruction.