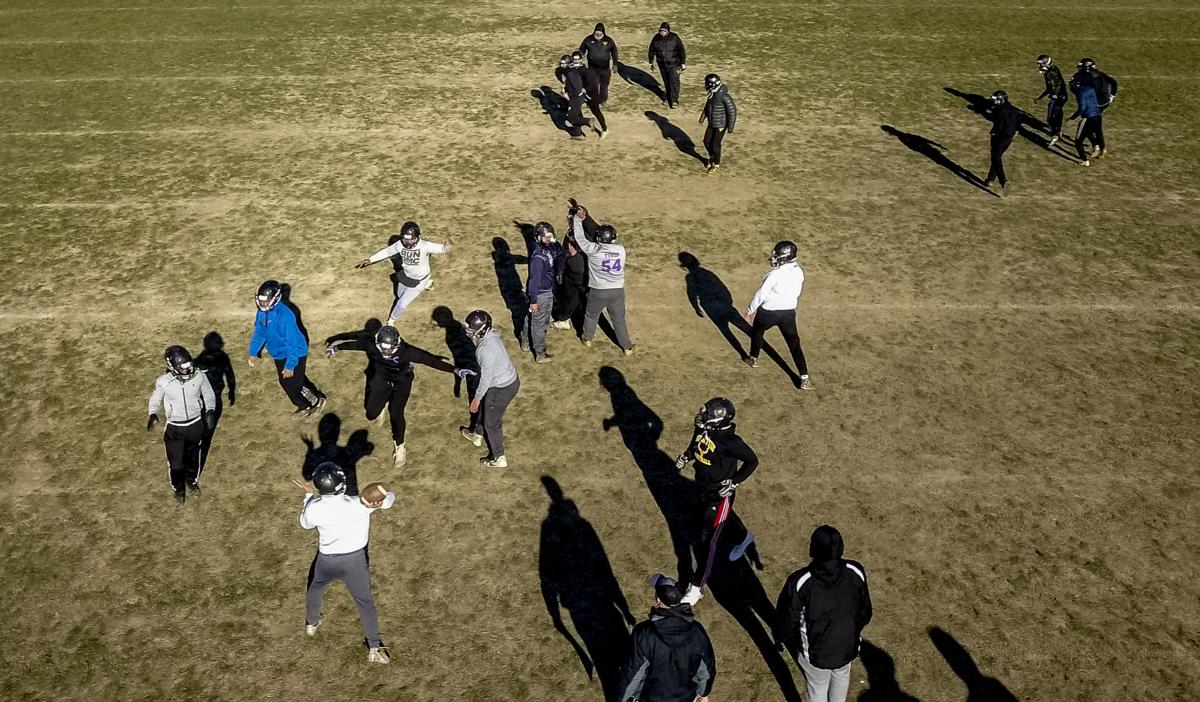 The Elkton football team runs a play during Thanksgiving Day practice on Thursday. The Golden Elks will travel tonight to play Oakdale in the 2A State semifinals. 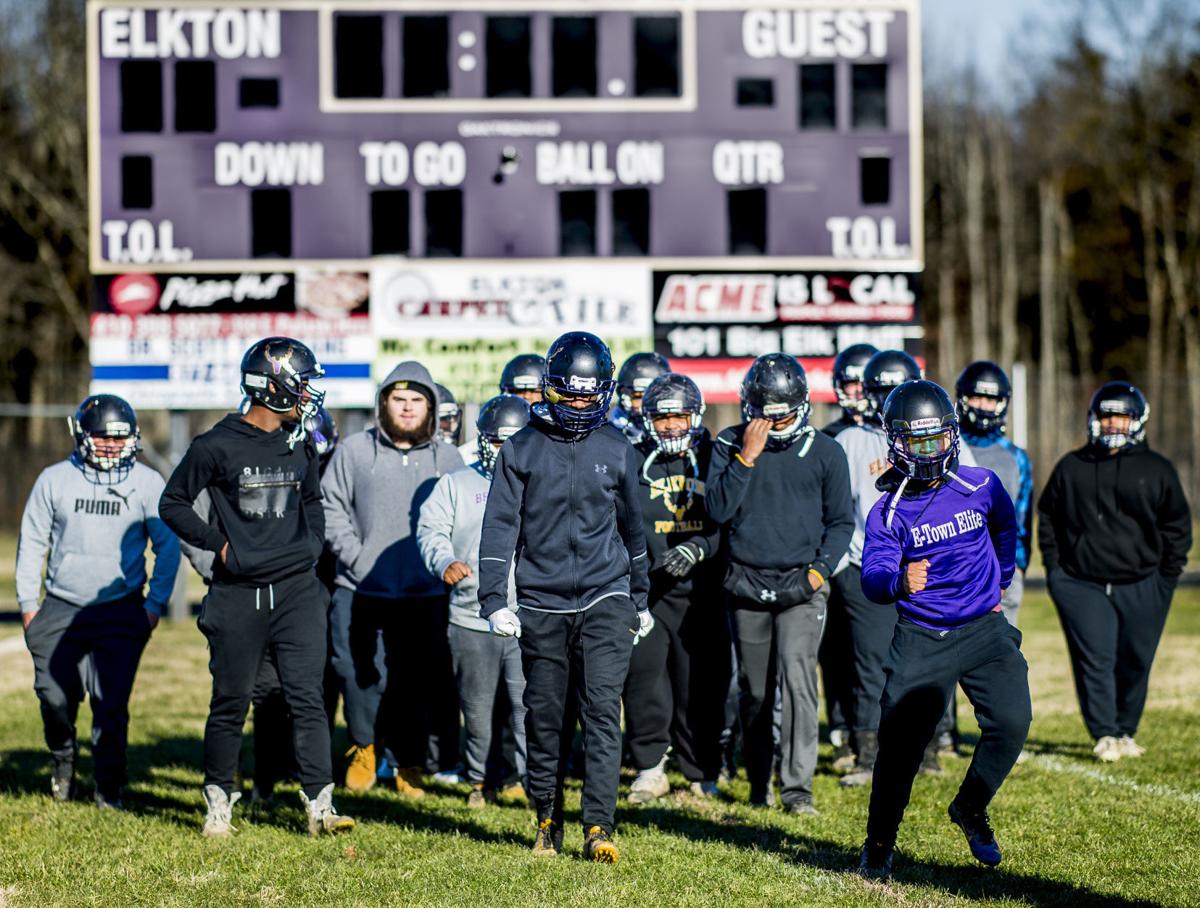 Elkton football players walk together during early-morning practice on Thanksgiving. 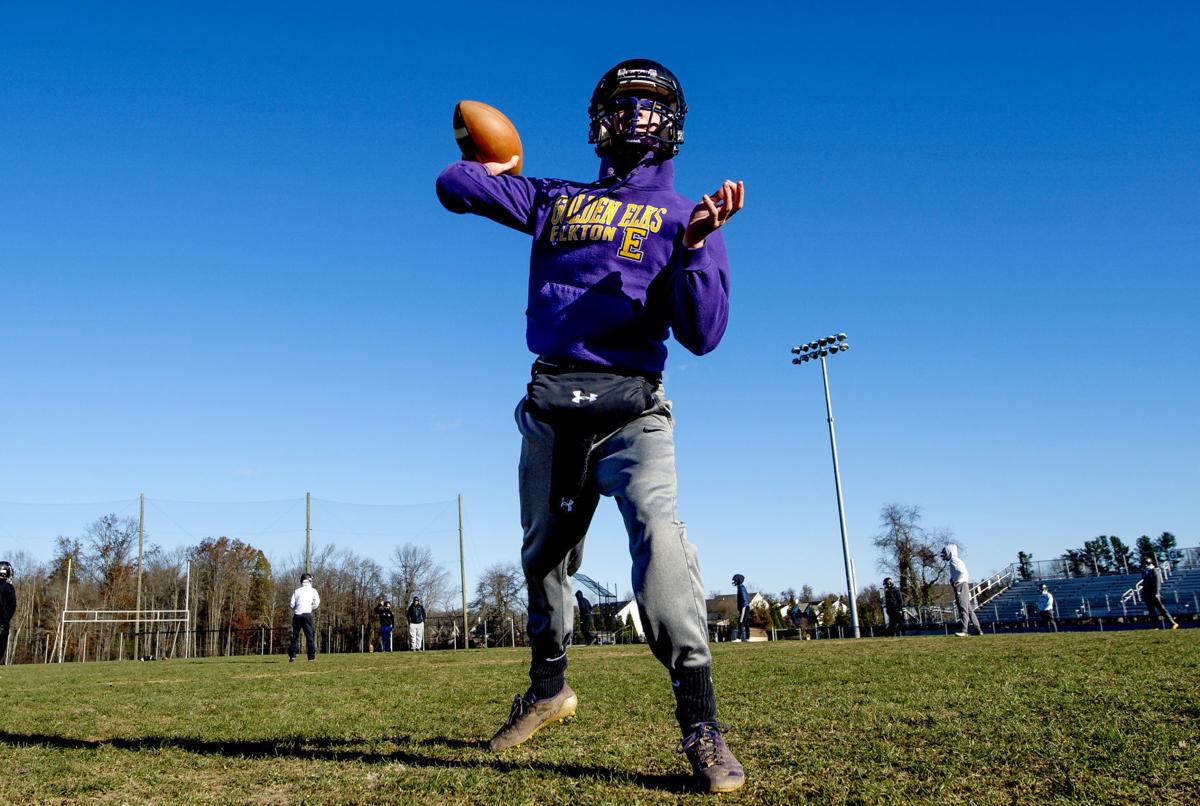 Elkton junior Nolan Null gets his work in during a frigid Thanksgiving Day practice. 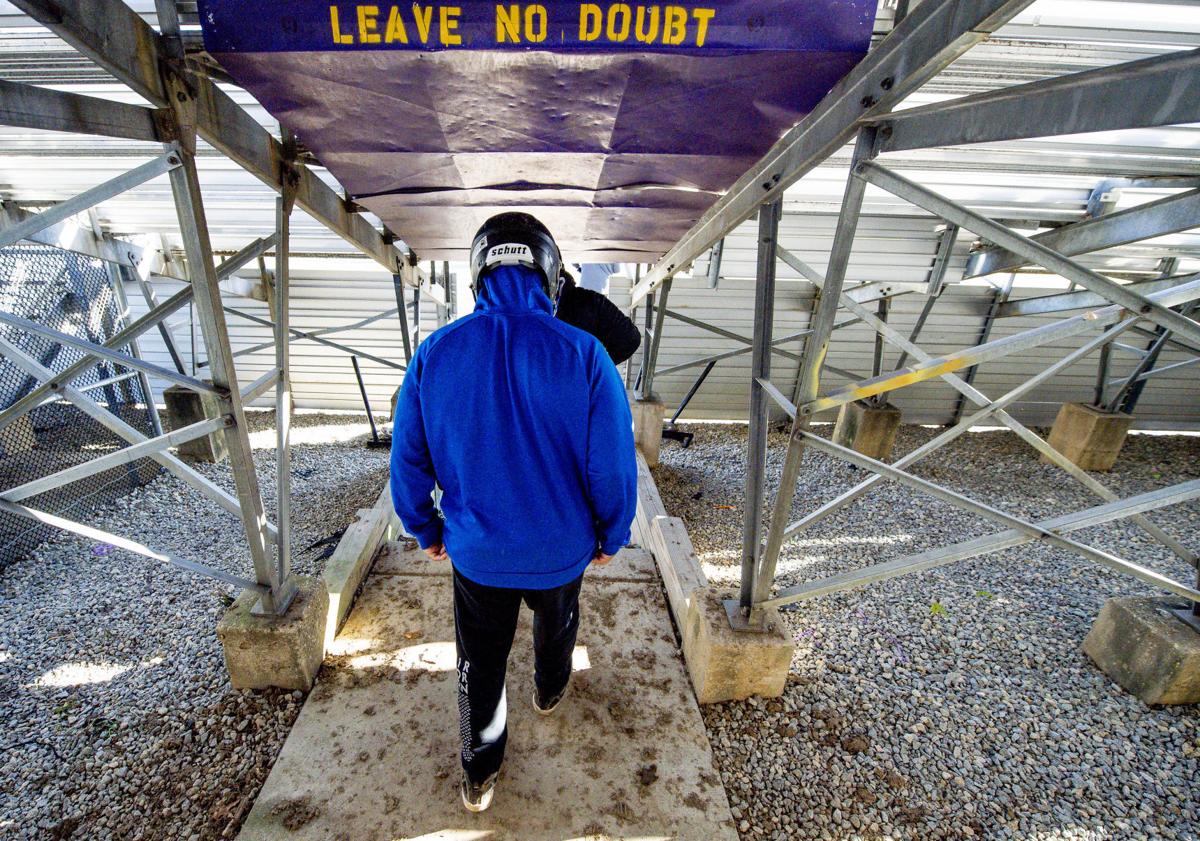 An Elkton football player walks to the field for Thanksgiving Day practice. 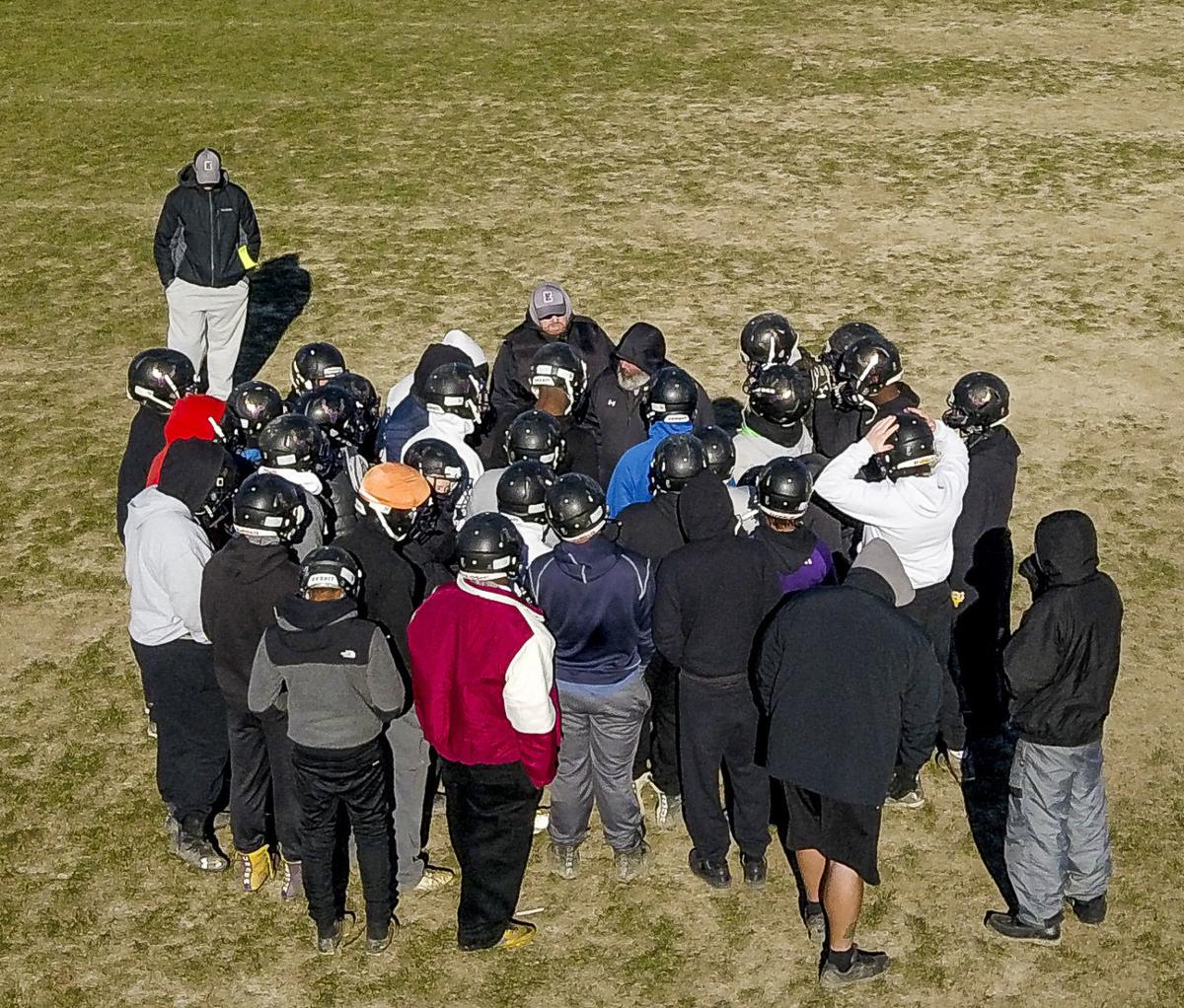 The Elkton football team gathers on the field during an early-morning Thanksgiving Day practice.

The Elkton football team runs a play during Thanksgiving Day practice on Thursday. The Golden Elks will travel tonight to play Oakdale in the 2A State semifinals.

Elkton football players walk together during early-morning practice on Thanksgiving.

Elkton junior Nolan Null gets his work in during a frigid Thanksgiving Day practice.

An Elkton football player walks to the field for Thanksgiving Day practice.

The Elkton football team gathers on the field during an early-morning Thanksgiving Day practice.

ELKTON — For the second time in the past three years, the Golden Elks took the field at Elkton High School Stadium for a Thanksgiving Day walk-through.

The deep-season practice, a tradition reserved for the few high school football teams remaining in the state playoffs, marked the final tune up for Elkton before it boards a pair of buses bound for the Appalachian Mountains.

The Elks (10-2) will travel to Frederick County tonight to battle undefeated Oakdale (11-0) in the 2A State semifinals, where a victory will result in a trip to the state championship game at Navy-Marine Corps Memorial Stadium in Annapolis.

“It’s tough out West. They’ve got a great student section, very passionate out there. With their team having 28 seniors, they probably feel like this is their moment. They’re going to be out in numbers,” said Elkton fifth-year head coach Matt Feeney, whose team is vying for its second state title game berth of the past three years. “Our guys just need to keep their composure, which I have no doubt they will because it’s been a marker of this team. We’ll give them everything we’ve got for 48 minutes and live with the result.”

Not surprisingly, tonight’s contest should be the toughest test to date for Elkton, which advanced to the state tournament after last week’s 24-13 win over North Caroline in the East Region Final. After facing the Bulldogs’ run-heavy Wing T offense, the Elks must quickly turn the page in preparation for a spread attack featuring a mobile NCAA Division I-bound quarterback, a running back with college aspirations, athletic receivers and a talented offensive line.

Quarterback Collin Schlee, who verbally committed to Kent State, leads the way for Oakdale, entering the contest with 66 completions for 1,355 yards, 20 touchdowns and two interceptions. On the ground, the senior has rushed for 613 yards and eight scores, making it difficult for opposing defenses to corral both him and senior running back Simeon Sabvute (1,066 yards and 13 touchdowns).

On the outside, Blake Baxter paces the Bears with 25 catches for 607 yards and nine touchdowns.

“Everybody’s got to play as a unit,” said Elkton sophomore linebacker Kharee Stephens, who will try to build on his monster performance last weekend when he recorded 14 tackles, one fumble recovery, one pass breakup and two sacks. “They run a lot of different formations, different plays, so everybody’s got to watch film and stay on their grind and do what they can.”

Oakdale, in its eighth season of existence, is in the midst of a historic campaign after it overcame a mud-covered field to defeat Damascus on the road and capture the program’s first ever region title. Damascus entered having won 53 games in a row — the longest active winning streak in the nation.

“The big thing is just getting refocused. When you have a game like that, obviously, it gets a lot of attention — even national media — so it’s just trying to get them to understand that winning two playoff games isn’t the goal. The goal is to keep going here,” Oakdale head coach Kurt Stein said. “We’re trying to make sure that we put all of our attention on Elkton.”

The Golden Elks will counter with their own high-powered offense.

Defensive line play will play a critical role for both teams against a pair of offenses that have faced little resistance all season.

“We have a tough task in terms of slowing them down,” Stein said of preparing for Elkton. “The quarterback can play, No. 3, the tailback (Tashawn Watters), is a really, really good athlete. They’ve got a couple guys that can make some plays so we’re going to have to try to give them different looks, put some pressure on the quarterback and see what we can do to get them off their rhythm a little bit.”

The Bears boast a roster built almost entirely of upperclassmen. Meanwhile, the visitors enter with a youthful group that features only four seniors and two players total who contributed on the team two years ago when the Elks advanced to the state championship game.

That year, Elkton finished one win shy of a state crown, falling in the title game to Walkersville — another Frederick County team.

“I’m sensing just a different vibe from this group than say the 2016 group. Just a little bit more relaxed. Not panicky, not relaxed like we’ve got it in the bag, but relaxed because they’re confident and going to go out and play their best game. No matter what happens, they’re going to play until that final whistle,” Feeney said. ‘Not that the 2016 team gave me a feeling that [the stage] was too big. It’s just a little bit of a different feel.

“Talking to their coach, they have 28 seniors on their team. In the beginning of the year, we had 28 players. It just gives you an idea of what we’re looking at in this matchup from a maturity standpoint,” Feeney added. “But sometimes, when you’re a little younger, you feel like you can take on the world, and I think that’s what these guys feel. They’re unfazed right now. They’re willing to take on the next opponent, they’re not batting an eye, they’re not concerned about records and things like that. They’re ready to get after it.”