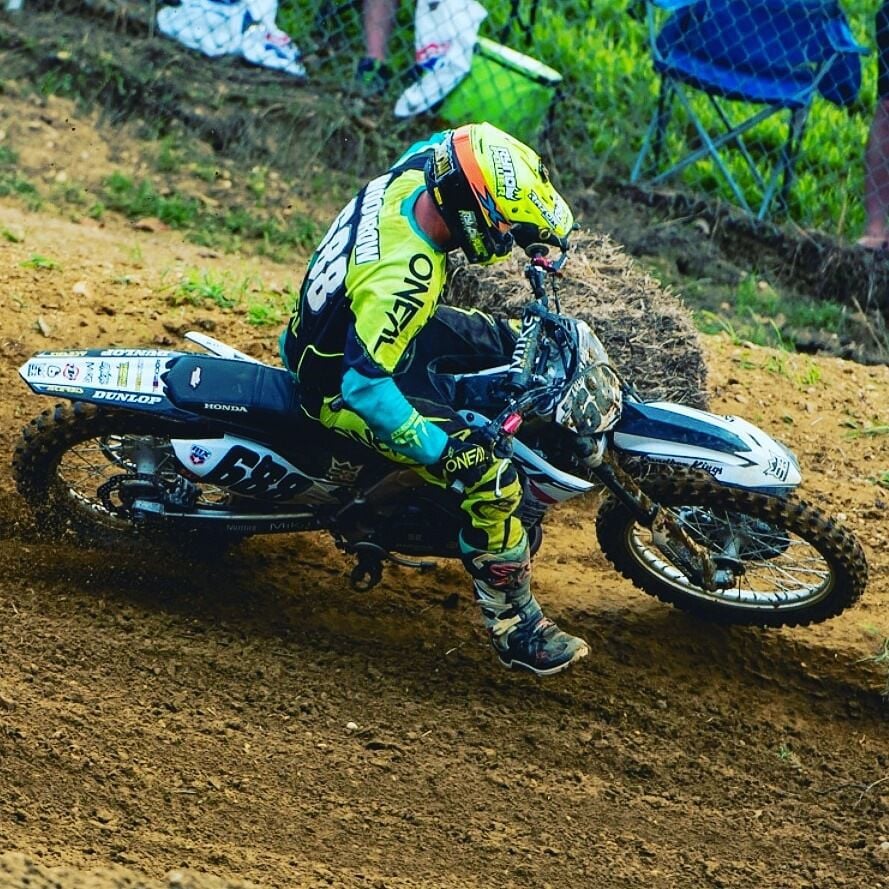 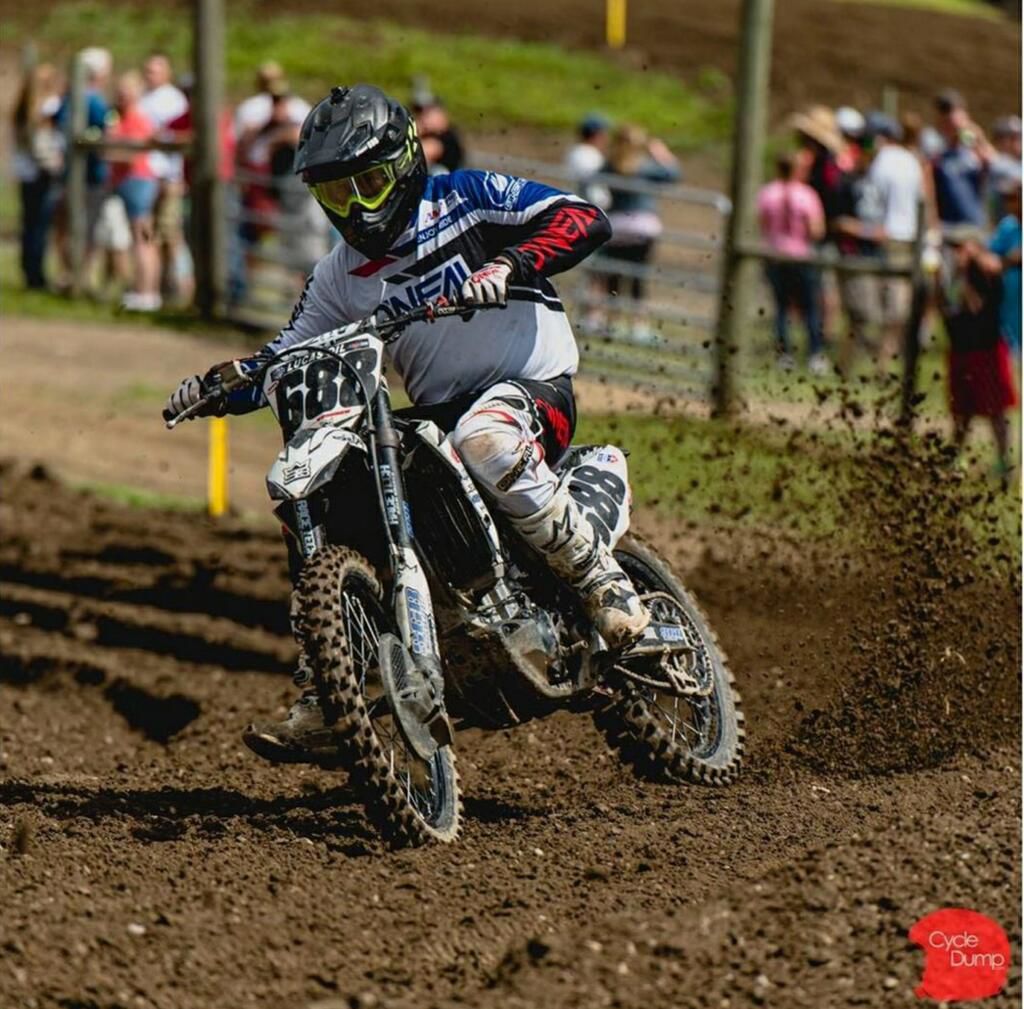 As a teenager, Gabe Woodrow, pictured, trained on a dirt bike track built in his Colora backyard 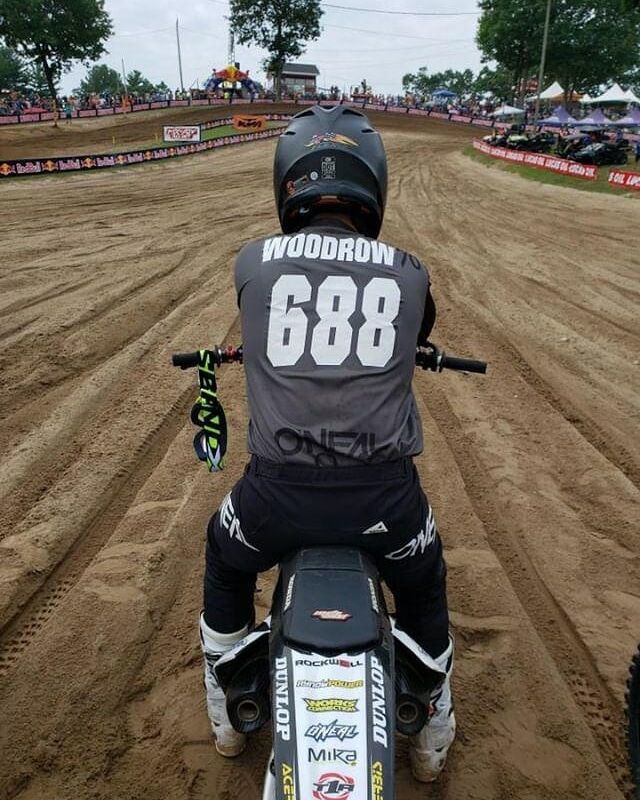 As a teenager, Gabe Woodrow, pictured, trained on a dirt bike track built in his Colora backyard

COLORA — Gabe Woodrow’s dream of becoming a professional motocross rider began in the lot behind his childhood home in Cecil County, where his father transformed their backyard into a dirt bike racing track.

The father-son duo started small, using heavy excavating equipment to turn the grass over and build up a pair of hills, creating a serviceable training facility for the teenager and his motorcycle.

“There was no plan for it,” explained Woodrow’s father, John. “We didn’t expand it a whole lot. We just kept adding jumps as he progressed, taking up more ground out through the woods. There’s nothing fancy about it. It’s just a backwoods motocross track.”

The pair even included a series of small hills, known as whoops, to help Woodrow test his bike’s suspensions and prepare for racing on public tracks.

“It was nothing crazy, but my dad had some equipment and built me a small track. It was just a couple jumps and a couple turns, but eventually, as I got a little faster, a little better, the jumps got bigger and the turns crazier. Eventually, I had a pretty decent track,” Woodrow said. “ I became obsessed with it. I completely quit baseball and everything to chase my dream in professional motocross.”

Nearly two decades later, Woodrow has reached the pinnacle of off-road motorcycle racing, competing alongside the world’s best riders as a member of the Lucas Oil Pro Motocross Championship Series. He currently races in the 450 motorcycle class, entering his name in a majority of the East Coast events, many of which are showcased on national television.

For Woodrow, 30, the journey has been anything but easy. A long list of injuries, the financial cost of racing and a late start — he didn’t enter his first race until he was already a student at Perryville High School — made his trek to professional motocross a difficult one.

“I’ve always kind of been behind the eight ball. A lot of guys, even though they may have been a year older than I was, they were always a little more talented than I was,” said Woodrow, who began racing at age 15. “All I’ve always tried to do was play catch up and ride as much as possible. I never really knew what I was doing, to be honest. A lot of kids, they went to training facilities and schools and things like that. They spent thousands and thousands of dollars and tons of time training. They basically quit school or were homeschooled.

“It’s definitely a rich kid’s sport, especially as you get older,” he added. “Parental finances kind of drop off when you reach 18. My dad helped me tremendously, but the older I got, I had to juggle holding my full time job, plus training and traveling non-stop. If I wasn’t on the road racing somewhere, I was coming back just in time to get a couple hours of sleep and go to work. It was definitely a struggle all the time.”

Broken bones and broken bikes added to the challenge.

“When I first got into it, I never broke any bones in my body. As soon as I started getting a little faster, I remember breaking at least two bones a year ever since,” Woodrow said. “There’s been plenty of times where I thought I was done. Maybe it takes some time for you to calm down or regain a little confidence, but that’s the craziness of the sport. I just learned throughout the years, especially getting into an expert class and graduating into the pros, that injuries are just part of the sport. There’s absolutely no way around it, and there’s no racer I know who hasn’t been severely hurt. It’s not if you get hurt, it’s when you get hurt.”

Despite the injuries, Woodrow continues to ride.

“Every time he’d stand at the starting line, you’d get butterflies in your stomach and you’d get worried to death because I’ve seen many a kid get hauled out in a helicopter or ambulance. At the same time, I didn’t want to tell him he had to stop,” Woodrow’s father said. “I’ve never doubted him at any time. Any sport he did, he got better and better at it, but he really took to motocross. He got several injuries and lots of broken motorcycles, but he never gave up.”

The track is a personal favorite for Woodrow, who has been racing there since he first entered the sport. On Saturday morning, the Colora native will need to out-perform a large group of riders in a primary competition to gain entry to Saturday afternoon’s official field of 40.

“It’s very stressful. You only get about 10 minutes to not only lay down a fast lap but also learn the track. You’re basically learning while you’re riding at your full potential,” Woodrow said about the qualifier. "While being very, very dangerous, it’s also very scary. You’re riding over the edge hoping everything works in the good for you.”

Budds Creek is the second to last major race in a 12-round schedule that began in April and runs through August.

“The fitness that it takes, I just fell in love with that. It’s so hard to push your mind, your body, everything to that level. You’re basically at a maximum heart rate for 35 minutes. It’s kind of unheard of. It’s not normal,” Woodrow said. “Football, basketball, baseball players, they don’t do that. You need the hand-eye coordination of those [sports], plus the fitness of a Tour-de-France athlete, and then some, throwing around a 250-plus pound bike. On race day, the nerves are always through the roof.

“It’s like being in a hornets nest,” he added. “Everybody’s chasing you and you’re doing everything you can to sprint, to push and hit your marks clean and precise.”

“I’m a little older than I’d like to be in the prime of the sport, but I’ve learned so much from doing it on my own and humbling me throughout the years,” Woodrow said. “The confidence has skyrocketed for me because I know the training now, the bikes. I have so much knowledge now from being a little older.”