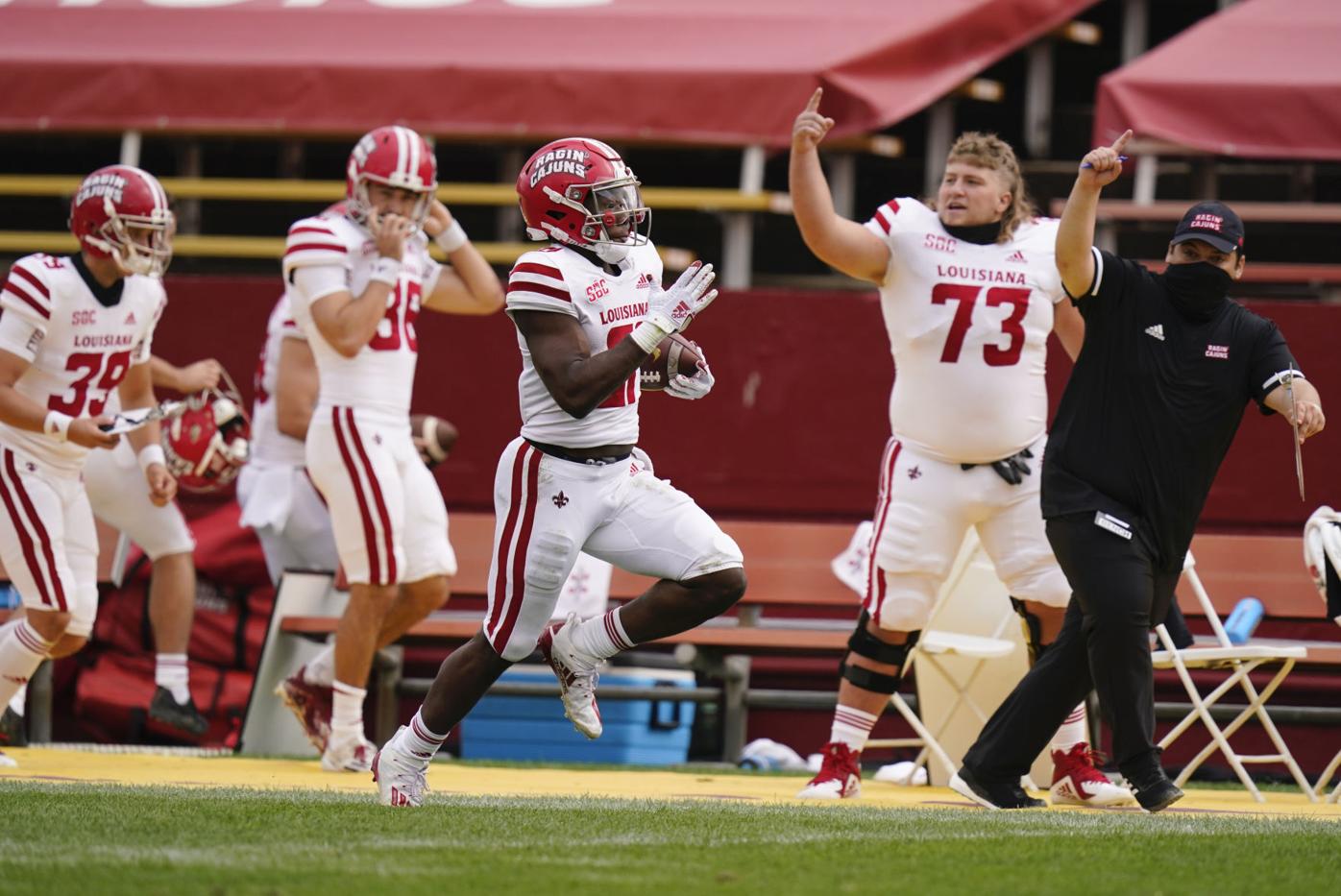 Louisiana-Lafayette running back Chris Smith, center, returns a kickoff 95-yards for a touchdown during the first half of an NCAA college football game against Iowa State, Saturday, Sept. 12, 2020, in Ames, Iowa. (AP Photo/Charlie Neibergall) 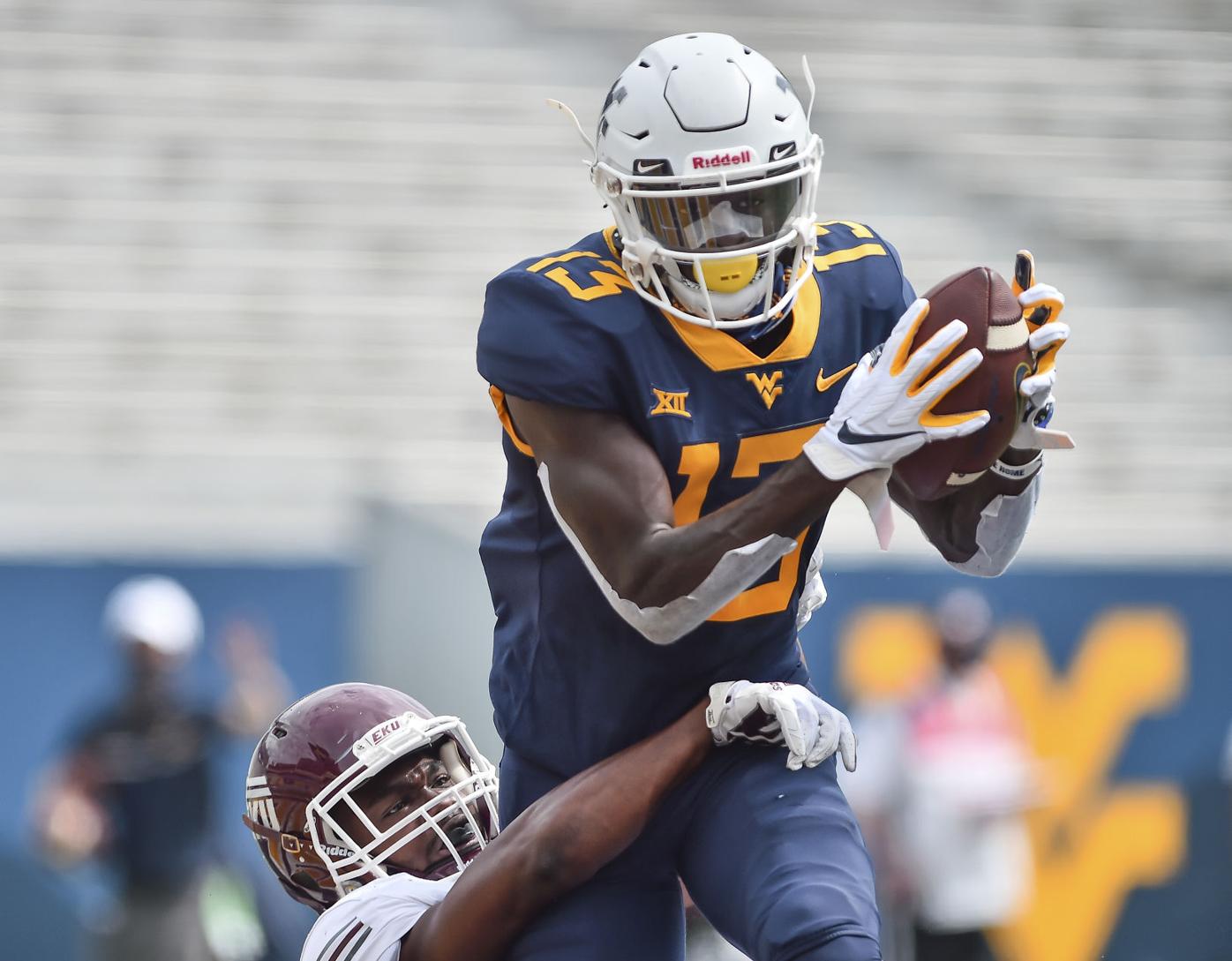 Louisiana-Lafayette running back Chris Smith, center, returns a kickoff 95-yards for a touchdown during the first half of an NCAA college football game against Iowa State, Saturday, Sept. 12, 2020, in Ames, Iowa. (AP Photo/Charlie Neibergall)

The first big weekend of college football was mostly stripped of the pageantry that is at the heart of the game.

The stands were empty, or attendance was limited, because of a pandemic that has disrupted the season.

That didn’t stop shows of support for the fight against racial injustice.

Players for Kansas State and Arkansas State locked arms on the sidelines with their teammates before the game in Manhattan, Kansas. K-State players spoke in a video calling for unity and equality, and there were cheers and applause following a moment of reflection.

A similar scene played out in Morgantown, West Virginia, before West Virginia’s game against Eastern Kentucky.

Iowa State wore patches on their jerseys honoring Jack Trice, the school’s first Black athlete, for their game against Louisiana-Lafayette in Ames, Iowa. Trice died of injuries sustained in a football game in 1923, and the Cyclones’ stadium is named in his honor.

North Carolina, for its game against Syracuse in Chapel Hill, North Carolina, wore a patch designed by linebacker Tomon Fox. The patch featured the raised clenched fist of the Black Lives Matter movement encircled by the words “Peace,” “Justice,” “Freedom,” “Equality” and “Say Their Names.”

“We’re more than just athletes,” Fox said. “We’re trying to help out with what’s going on in the real world. There are a lot of things bigger than football right now. We’re using our platform in order to help with those things.”

The Black Lives Matter logo also showed up on the back of Duke’s helmets for its game at Notre Dame in South Bend, Indiana, and Texas players were to wear “We Are One” jersey patches for their game against UTEP in Austin.

COVID-19 continued to be at the fore. Big 12 teams Baylor (vs. Louisiana Tech) and Oklahoma State (vs. Tulsa) had games postponed, as did TCU (vs. SMU) on Friday.

Memphis, which had an open date, suspended practices after a COVID-19 outbreak and the status of next week’s game, against Houston, will be determined next week.

Virginia and Virginia Tech announced they were postponing their Sept. 19 game because of COVID-19 issues at Virginia Tech. The postponement is the second for Virginia Tech since the Atlantic Coast Conference released a revised schedule.

Georgia Southern had 33 players listed as inactive for its game against Campbell. Spokesman Bryan Johnston did not provide the number of players out because of COVID-19. He said there were various reasons for the absences, including injuries, suspensions and coach’s discretion in addition to COVID-19.

At Iowa State, crowd noise was piped in and the band and cheerleaders were spread out on the east side of the stadium. Families of players for both teams and immediate family of school officials were on the west side. Spokesman Mike Green said about 1,000 people were in the stadium.

To Syracuse defensive end Kingsley Jonathan, just playing a game — even in a mostly empty stadium with a smattering of cardboard cutouts of fans — brought a sense of normalcy during what has been a difficult summer.

Syracuse coach Dino Babers, like his players, was locked in once kickoff came.

“Next time I looked up into the stands is when it was halftime and I saw those cardboard things in the end zone,” he said.