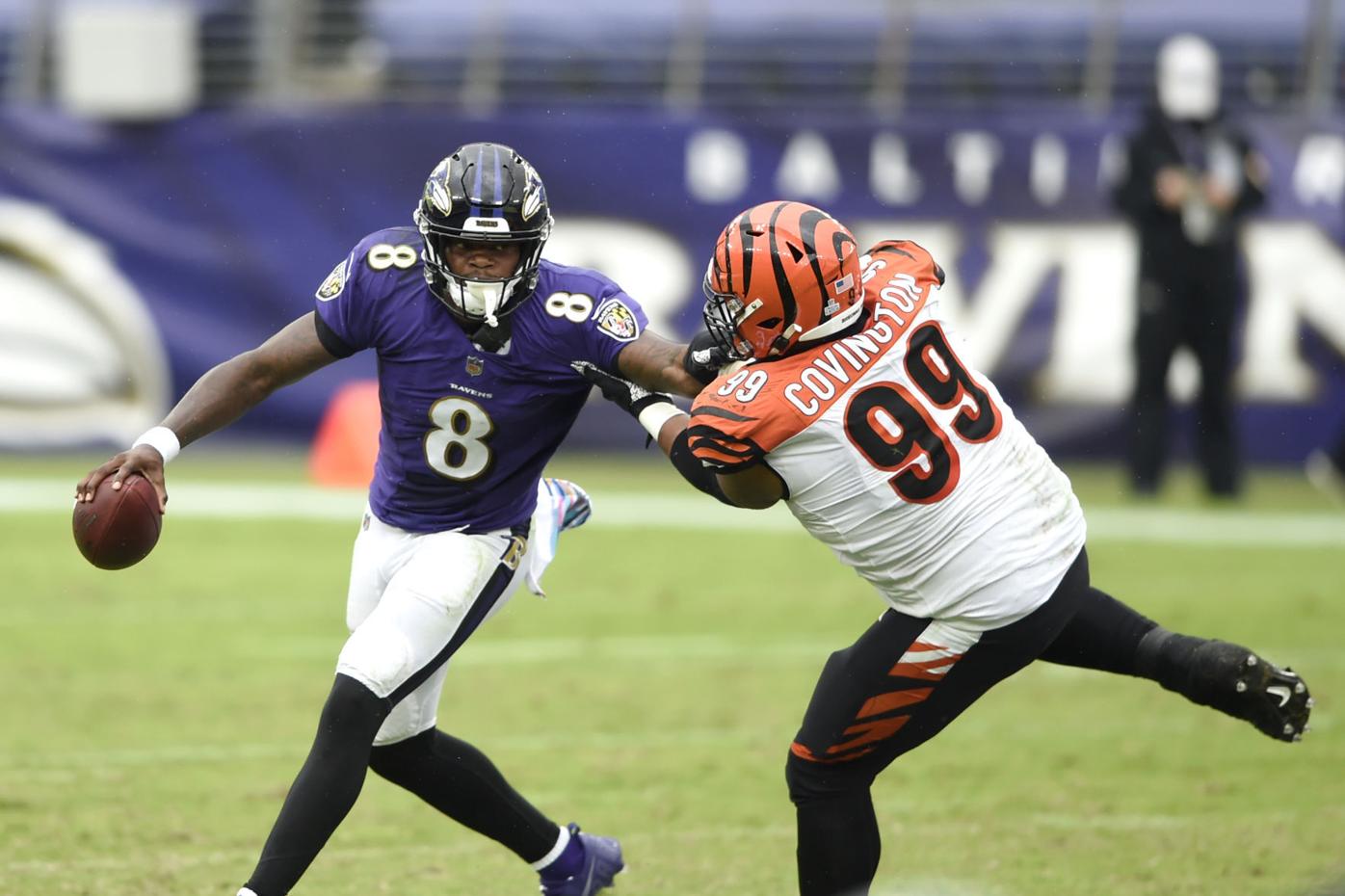 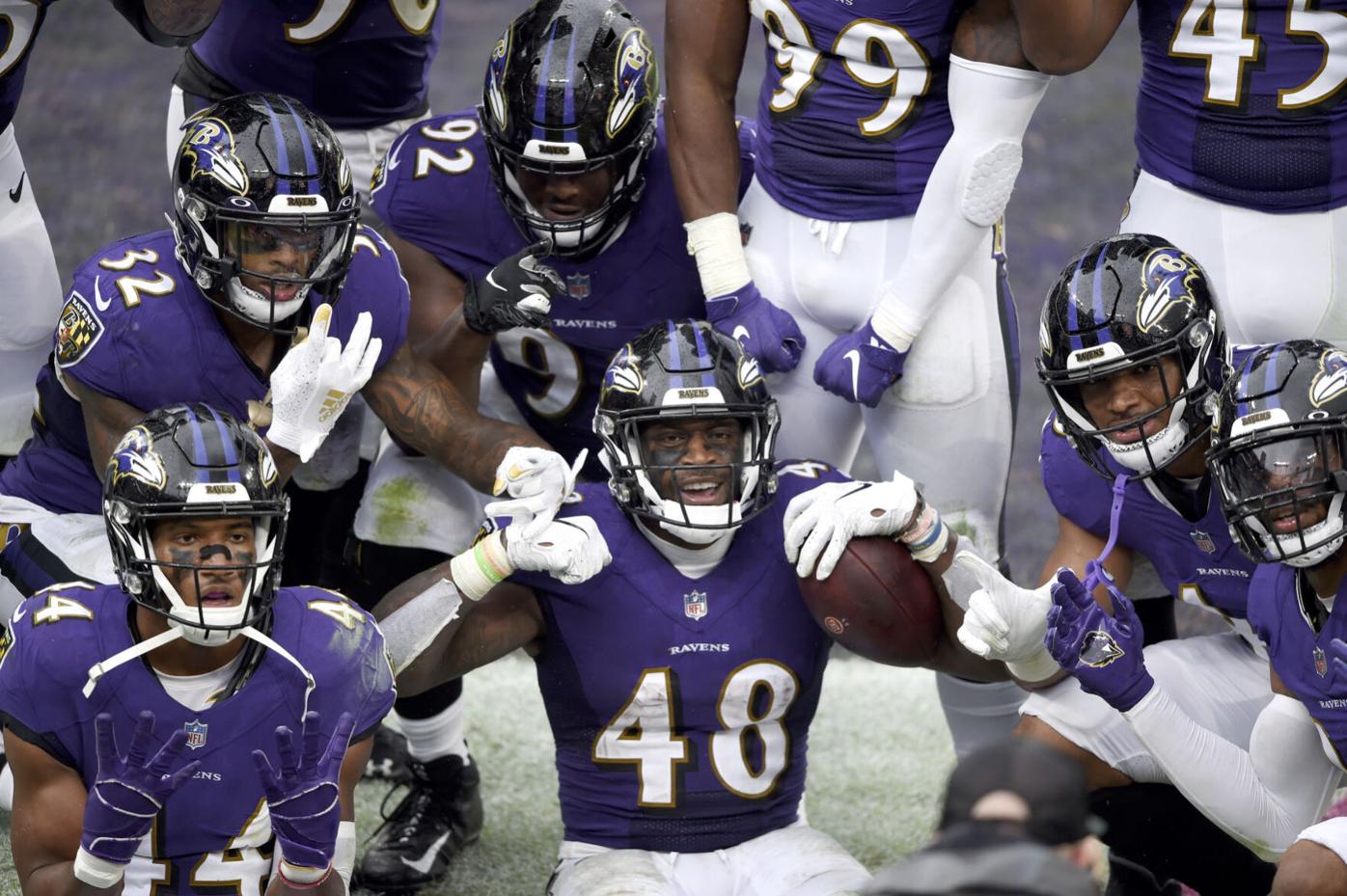 Baltimore Ravens inside linebacker Patrick Queen (48) and teammates pose for a photographer after he returned a fumble recovery 53 yards for a touchdown against the Cincinnati Bengals during the second half of an NFL football game, Sunday, Oct. 11, 2020, in Baltimore. The Ravens won 27-3. (AP Photo/Gail Burton)

Baltimore Ravens inside linebacker Patrick Queen (48) and teammates pose for a photographer after he returned a fumble recovery 53 yards for a touchdown against the Cincinnati Bengals during the second half of an NFL football game, Sunday, Oct. 11, 2020, in Baltimore. The Ravens won 27-3. (AP Photo/Gail Burton)

The Baltimore Ravens are finding that film study and charting the opposing defense’s tendencies has little bearing on what they end up seeing on game day.

That causes them to alter their approach on the fly.

That’s one reason why Baltimore’s offense has not yet reached the level it achieved last year, when the Ravens led the league in points, ranked second in total yardage and set an NFL record with 3,296 yards rushing.

Quarterback Lamar Jackson missed two practices last week because of a sore knee and a stomach issue, but when he took the field Sunday against Cincinnati he was ready to execute a game plan based on what the Bengals showed in the first month of the season.

“We got out there, and it was just a different defense,” said Jackson, who ended up throwing 37 passes in a 27-3 victory.

Coach John Harbaugh explained Monday that Cincinnati employed “a true college 4-3 type of a look with the safeties low. They played that in the past, but they hadn’t played it yet it this year.”

Washington pulled a similar defensive switcheroo one week earlier. So while the Ravens (4-1) have matched the best start in franchise history, they’re being pressed to utilize the strong running game that carried them to a 14-2 regular-season record in 2019.

“That happens to us quite a bit,” Harbaugh said of the defensive surprises the team has encountered his year. “So, that’s something we’ve got to learn to deal with and handle as an offense because we run a unique scheme.”

Harbaugh defended Baltimore’s 28-37 run-pass ratio against the Bengals, pointing out that many of the passes were thrown in the final two minutes of the first half, and that the Ravens ran only five plays in the fourth quarter. He also noted that Baltimore ran 20 times on first and second downs compared to 13 passes.

The defense played its best game of the season, getting seven sacks and forcing three turnovers. Baltimore was poised for its first shutout since 2018 before the Bengals capped a meaningless fourth-quarter drive with a last-minute field goal.

Seven players had sacks and rookie linebacker Patrick Queen got his first NFL touchdown on a 52-yard fumble return.

“We don’t really care who makes a play, and I think that’s what makes it so fun,” cornerback Marlon Humphrey said. “Whoever makes a play, it seems like we all celebrate, like we made it.”

The offense is certainly better than most, but Jackson, Harbaugh and offensive coordinator Greg Roman know the unit has not yet reached its potential.

Jackson has gone three straight games without reaching the 200-yard mark in yards passing, and the 161 yards rushing against the Bengals were enhanced by a 42-yard effort by Devin Duvernay on an end-around.

“We’re still very much a work in progress,” Harbaugh said. “We have a lot to improve on: run, pass, run/pass options, we’ve got to chase all areas. In the end, the run/pass numbers will take care of themselves.”

Second-year receiver Marquise Brown had six catches for a team-high 77 yards and finally got into the end zone, catching a 2-yard TD pass from Jackson to make it 17-0 in the second quarter.

“I wish I could’ve connected with him more,” Jackson said. “I feel like there were still opportunities out there left for my offense that we should’ve finished drives.”

Baltimore went 7 for 15 on third downs and failed to convert its lone fourth-down try.

Maybe he was cautious because of his knee problem, but Jackson carried only twice for a paltry 3 yards. Last year, he set an NFL record for yards rushing by a quarterback and this season was the team’s leading rusher after four weeks.

Harbaugh said he expects Jackson to have a full week of practice starting Wednesday.

18 — The number of consecutive games with a takeaway by the Ravens, the longest active streak in the NFL. Baltimore has forced 32 turnovers during that span.

The Ravens travel north for a matchup with the Eagles (1-3-1) on Sunday. Baltimore is 0-2 in Philadelphia.