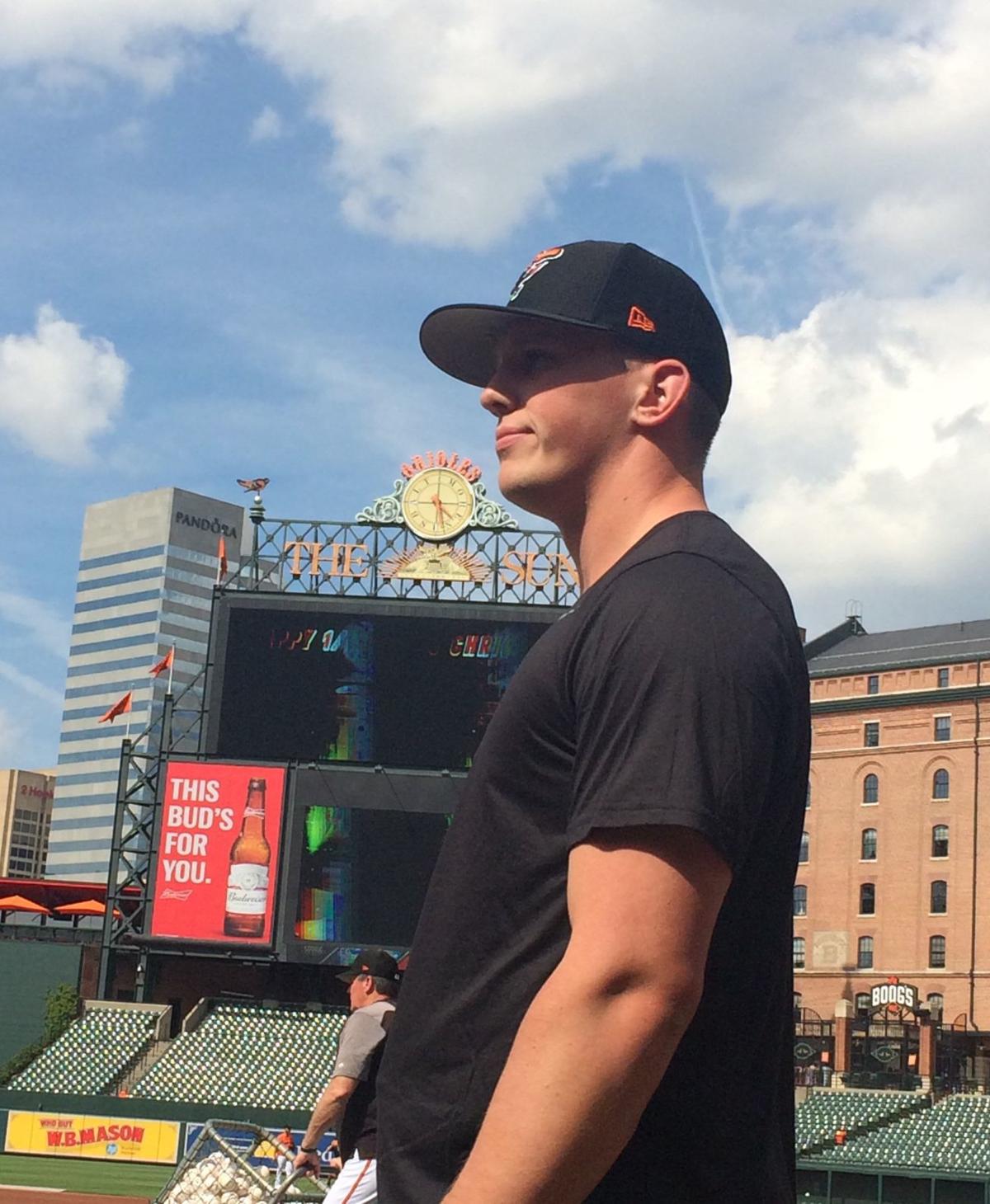 Baltimore Orioles first-round draft pick Adley Rutschman takes the field for batting practice prior to the team's game against the San Diego Padres on Tuesday at Oriole Park at Camden Yards in Baltimore. Selected No. 1 overall, Rutschman will spend a short period at the club's spring training facility in Florida before beginning his professional career with the Aberdeen IronBirds, the Orioles' short-season affiliate. 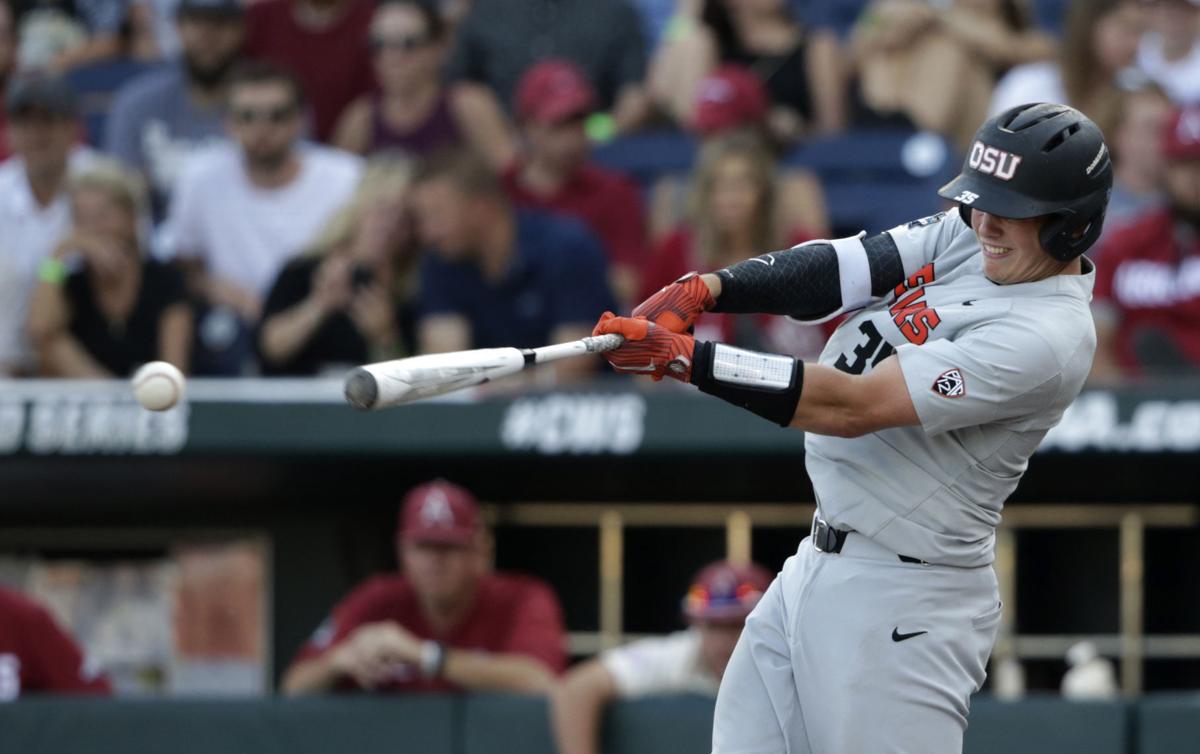 Selected No. 1 by the Baltimore Orioles, catcher Adley Rutschman will spend part of his first summer in professional baseball with the Aberdeen IronBirds, the club’s short-season affiliate.

Baltimore Orioles first-round draft pick Adley Rutschman takes the field for batting practice prior to the team's game against the San Diego Padres on Tuesday at Oriole Park at Camden Yards in Baltimore. Selected No. 1 overall, Rutschman will spend a short period at the club's spring training facility in Florida before beginning his professional career with the Aberdeen IronBirds, the Orioles' short-season affiliate.

Selected No. 1 by the Baltimore Orioles, catcher Adley Rutschman will spend part of his first summer in professional baseball with the Aberdeen IronBirds, the club’s short-season affiliate.

One day after catcher Adley Rutschman agreed to a record-breaking contract with the Baltimore Orioles, it was announced the first overall selection in this month’s First-Year Player Draft will spend at least part of the summer with the Aberdeen IronBirds, Baltimore’s short-season affiliate.

Baltimore first-year general manager Mike Elias made the announcement Tuesday alongside Rutschman during a press conference at Oriole Park at Camden Yards ahead of the Orioles’ home game against the San Diego Padres.

“He’s won a lot of awards this summer for his accomplishments in college, he has a few more still, so we like him to participate in some of those that are going to happen this week. Then, we’re going to send him to our spring training facility in Sarasota, Fla. to join the Gulf Coast League roster, [which will] be kind of a slow, on-boarding process and get him going after the layoff he’s had,” Elias explained. “Then, I expect, surely thereafter, will join the Aberdeen IronBirds of the New-York Penn League and start his climb through our minor league ladder.”

Rutschman will be the first Orioles first-round selection to spend his first summer in Aberdeen since pitcher Cody Sedlock joined the roster in 2016 after being selected 27th overall. The last two first-round selections — pitchers DL Hall (2017) and Grayson Rodriguez (2018) — made their professional debuts with the Low-A Delmarva Shorebirds on the Eastern Shore.

“I think we’ll let his play determine how fast he moves [through the system],” Elias said. “Every player is different, every first-round pick is different. Certainly, we don’t need to start him there if we don’t want to, but I always believe, when in doubt, starting players at the lowest level because it’s very easy to transfer them if they’re performing well. We took a lot of college players this year, and almost all of them will be starting off with that team.

“We’ve got a great franchise and great facility there and it’s really close to Baltimore,” Elias added. “I think there’s a lot of positives to him starting his career there.”

This year’s draft marked the second time in Orioles history that the team had the first overall selection in the MLB Draft. They previously drafted Ben McDonald with the top pick in 1989.

A junior at Oregon State University, Rutschman captured every major amateur and collegiate baseball award, including the 2019 Golden Spikes Award, given annually to the best amateur player in the country, and the Dick Howser Trophy, awarded to the best player in College baseball. This past season, Rutschman, 21, hit .411/.575/.751 (76-for-185) with 10 doubles, 17 home runs, 57 runs, 58 RBI, and 76 walks in 57 games.

Rutshman reached an agreement with the Orioles that will see the top pick earn an $8.1 million signing bonus, edging the previous high set by Gerrit Cole ($8 Million), when he was drafted by the Pittsburgh Pirates in 2011.

“Every time I’ve signed a baseball player in my entire scouting career, there’s always a back and forth. But the important thing is this entire process went well and he’s here and we’ve all arrived at something that we’re very pleased about and very excited about,” Elias said. “He’s done a lot in his life and his career so far to earn this opportunity, and I’m very confident that he’s going to seize it and take it going forward to great places.”

As part of his stay in Baltimore, Rutschman took part in Tuesday’s pre-game batting practice and was introduced to the fans during the evening’s contest.

“Excited to be here,” Rutschman said Tuesday, shortly after slipping on an Orioles home white jersey and jamming a black and orange hat over his short, brown hair. “I’ve had the opportunity to walk around the stadium, meet some of the fans, and it’s a special thing here, a special history. To be a part of that and be a part of the building process that’s going on right now, I’m truly humbled to be a part of that.”

Former Orioles first-round selection Manny Machado, who returned to play in Baltimore Tuesday for the first time since signing a lucrative, 10-year, $300 million contract with the San Diego Padres in the offseason, also reported to Aberdeen for his first professional assignment after being drafted in 2010.

“Just soak it all in,” Machado advised Rutschman during Tuesday’s pre-game press conference. “I wasn’t the No. 1 overall pick, that’s different, but just enjoy yourself. It’s an opportunity we work hard towards our entire lives to get to that situation, drafted by a ball club. He’ll be playing professional baseball for the rest of his career, so the only advice I can give is to continue to have fun, enjoy yourself every moment of the way, work as hard as you possibly can... and everything else will just fall into place.”