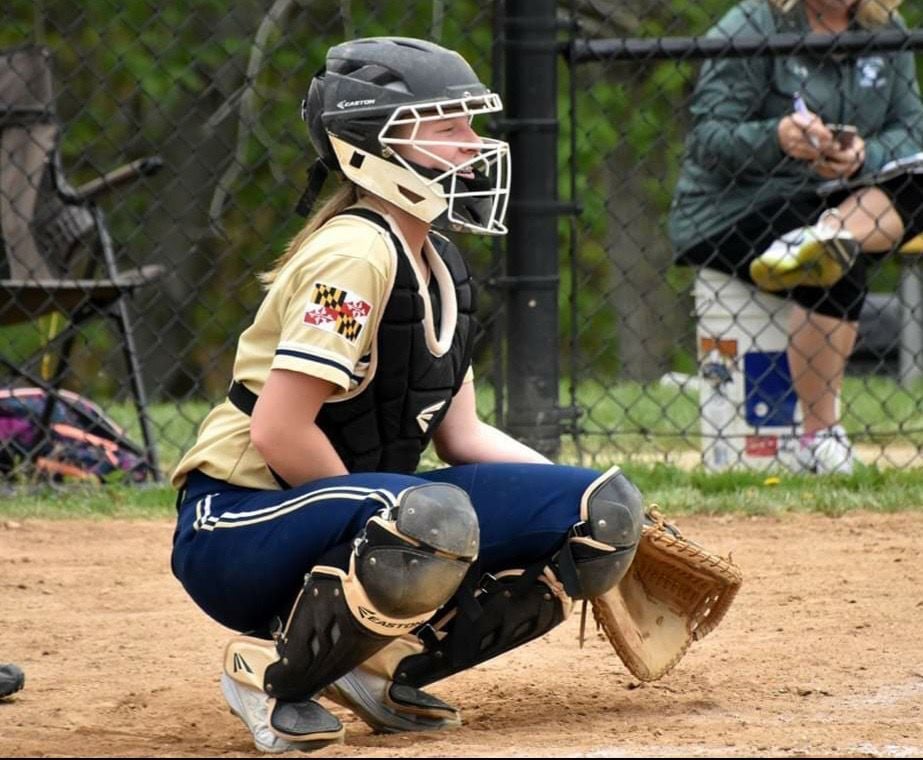 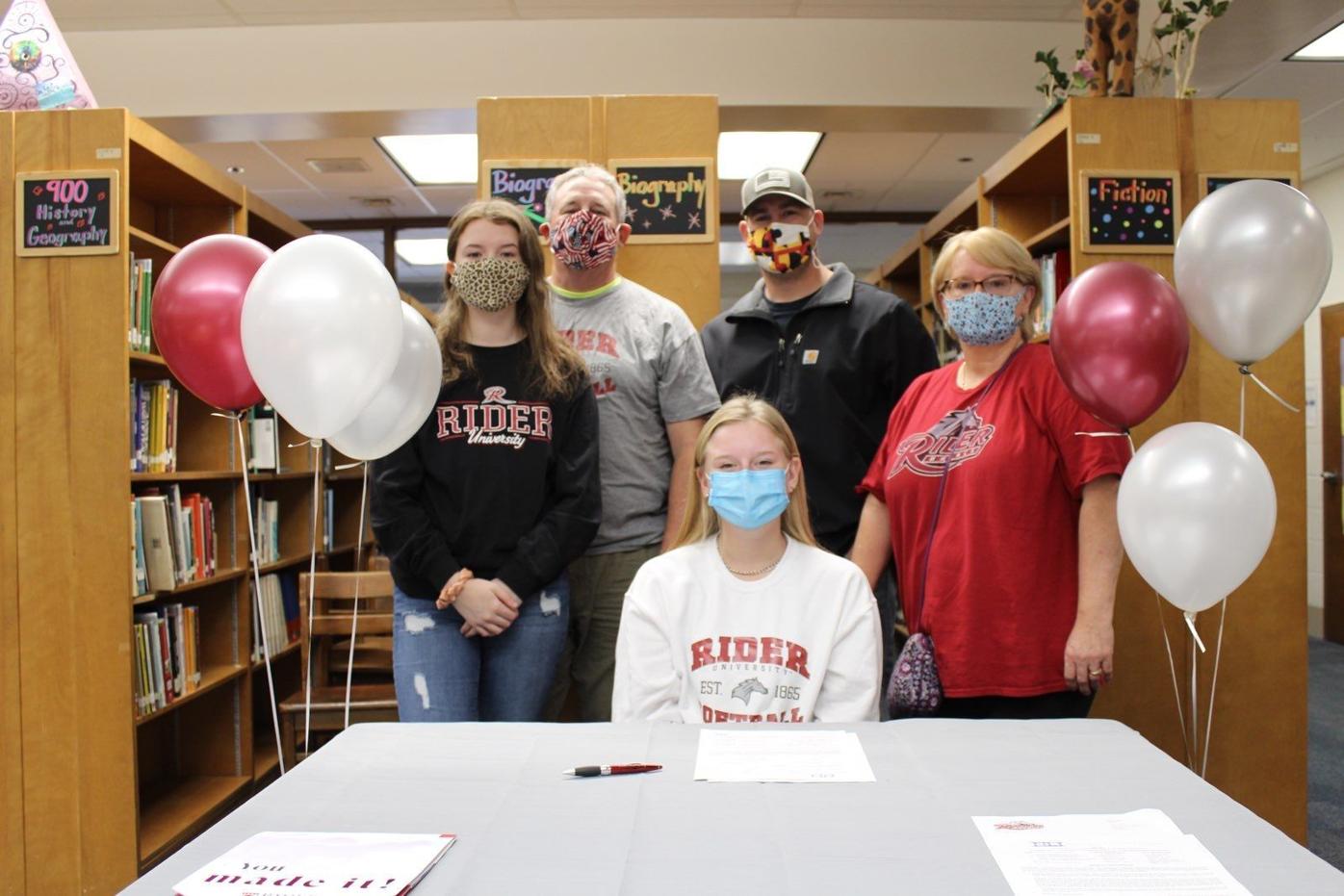 Kristyn Gardner settled on Rider in the back of her parents’ car, watching the sun set over the Eagles Stadium in Philadelphia.

Kristyn Gardner settled on Rider in the back of her parents’ car, watching the sun set over the Eagles Stadium in Philadelphia.

PERRYVILLE — Kristyn Gardner was in the backseat of her parents’ car, watching the sun set over the Lincoln Financial Field, the home stadium of the Philadelphia Eagles, when she decided to sign with Rider University for softball.

“The lights were on a little bit, the sun was about to go down,” she recalled in an interview with The Whig. “My dad reached his hand back and was like, ‘I’m proud of you.’”

They were on the way home from a visit to Rider, where Gardner met with Head Softball Coach Davon Ortega to iron out the details of her offer. She attended two camps at Rider, a division one school, and talked the decision over with her teammates on the Lady Dukes-Lynch, formerly the Maryland Legends, Gardner’s travel team of seven years.

But it was in the car with her parents, sun setting overhead as they sped down the freeway, that the decision clicked in her mind.

Gardner, a senior at Perryville High School, said that choosing a school was one of the most stressful decisions she has ever made. But it was also an exhilarating process, she said, and now that it’s settled, she’s excited about what the future holds.

She likened the college choice to shopping for a home — a commitment that could shape the course of her life.

“For teenagers and young adults, it’s one of the first big decisions you make,” she said. “It’s a really tough decision, and it’s something that you need to sit down and really think about, especially for sports.”

The road to signing with Rider was by no means smooth. It started in her sophomore year, when Ortega passed her contact information along to Gardner through a recruiter and invited her to attend a camp at Rider that summer.

“I’ve never played worse at a camp,” she recalled. “I was in front of these coaches that I was trying to impress, and I did so bad.”

Afterwards, she and her mom drove around campus, but she was so frustrated with herself that she hardly noticed her surroundings. It didn’t help that it was rainy and gloomy, matching her mood at the time. When they got home, she crossed Rider off the list.

Later that summer, though, she was invited back for another camp. Remembering her last experience, she wasn’t optimistic. But she figured, why not give it another shot?

“It was the complete opposite,” she said. “I did really well.”

Ortega promised they’d be in touch soon. This time, when she and her mom drove around campus, Gardner soaked it all up and loved every minute of it. She learned more about student life from the girls on the team, and then talked it over with her friends and family as the reality of receiving an offer from a D-1 school set in.

“I started to tear up a little bit,” she said. “I just didn’t think I could be a division one athlete.”

Yet here she is.

Gardner got started on softball early, and made the game uniquely her own from the first moments on the field.

“My mom tells me stories all the time,” she said. “I would just sit on the field and play in the dirt. I would just do my own thing. I would never let other people tell me how to play. I was like, ‘I’m a total of six years old, I know what I’m doing.’”

Clocking in at four feet, five inches, Gardner started as second baseman. Eventually, she transitioned to catcher, and stuck with it.

Catcher — it’s a leadership role by nature. Gardner is involved in every play, and in some ways sets the rhythm of each game. She said that taking on the role on the field has helped her mature into a young adult and find her voice.

“When I realized people were listening to me and letting me help them, that’s when I sort of got my voice, it just excelled from there,” she said. “It’s really important, especially for young teenage girls, to know that if you want to be heard, then you need to make your voice known.”

For Gardner, mentoring younger players has always been part of the fun. Working to perfect a play can be frustrating, but eventually something clicks, and then the excitement on the field is palpable. Those are the moments she looks to foster in her teammates.

Softball, she explained, is a demanding game. Out on the field, it’s win or lose — but it can be hard to power through the losses.

“You’re going to go 0 for 3, and sometimes you’re going to go up for bat and go 3 and 0. It’s just a constant battle with yourself,” Gardner said. “If you’re up to bat and you’re nervous — you struck out the past inning, and you’re telling yourself, ‘I can’t do this, this isn’t gonna work’ — it’s not going to work.”

When she gets behind the plate, the pressure of the game can be intense. But she uses the nerves to clear her mind, she said.

“Because I’ve been playing for so long, I’m just comfortable with myself and with my other teammates on the field,” she said. “It’s just become a second home to me.”

Losing her senior year, and her senior softball season, to the COVID-19 pandemic was infuriating, she said. She’s been looking forward to senior year ever since starting high school and tries not to dwell on the experiences she may be missing. She also plays volleyball at Perryville High, and got to play a bit last fall.

“I was very excited to hear we were having a season at all,” she said. “A lot of counties didn’t even get that, so I was really grateful.”

Still, she worries that they won’t be able to complete a softball season this spring. With everything so uncertain, she doesn’t know what to think.

One thing is certain though — Gardner can look forward to four years of thriving at Rider, where she’s excited to join a team of dedicated athletes under an incredible coach. Looking back, she took stock of how far softball has carried her, and gave thanks.

“I’d like to say thank you to my parents and my coaches, and especially my travel coach Ed Lynch,” she said. “He has completely changed my life. I wouldn’t be where I am without him, because he taught me everything I know.”