Sophomore running back Gregg Triplett III (28) is one of three players on the Elkton varsity football team who are related to former running back John Triplett. John, who passed away in 2015, was a catalyst on the Golden Elks’ 2000 State champion team.

Dah'mear Triplett (4) attempts to make a catch despite pass interference. The senior wide receiver is one of three players on the Elkton football team with the last name Triplett. 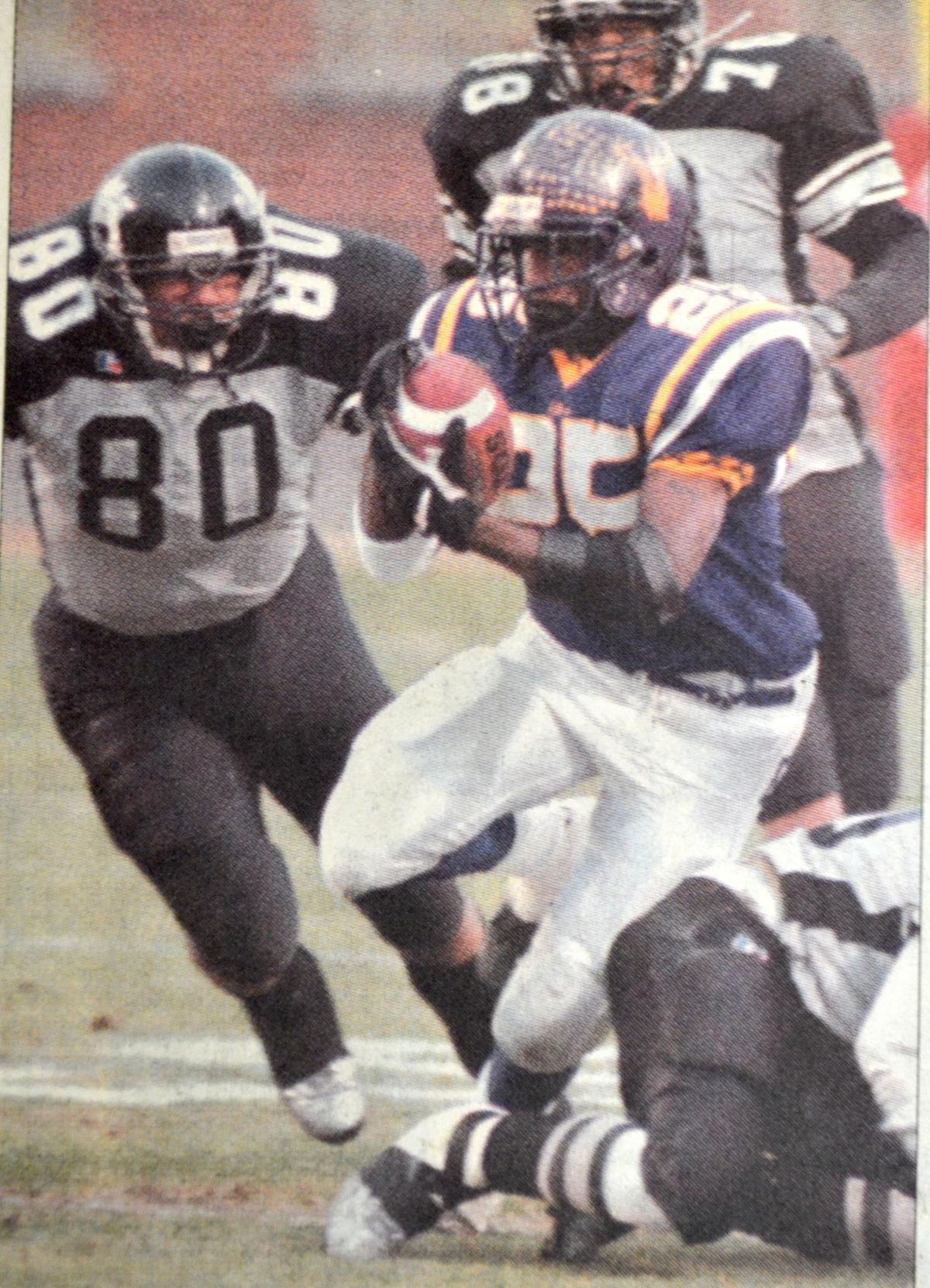 Elkton running back John Triplett powers his way up the field during the Class 1A State Football Championship in College Park in November 2000. Eighteen years later, his son, nephew and second cousin are all playing for the Golden Elks.

Sophomore running back Gregg Triplett III (28) is one of three players on the Elkton varsity football team who are related to former running back John Triplett. John, who passed away in 2015, was a catalyst on the Golden Elks’ 2000 State champion team.

Dah'mear Triplett (4) attempts to make a catch despite pass interference. The senior wide receiver is one of three players on the Elkton football team with the last name Triplett.

Elkton running back John Triplett powers his way up the field during the Class 1A State Football Championship in College Park in November 2000. Eighteen years later, his son, nephew and second cousin are all playing for the Golden Elks.

ELKTON — As the sun begins to set on Monday’s frigid football practice taking place inside Elkton High School Stadium, freshman quarterback Jayden Triplett takes the snap and buries the weathered football into the arms of the running back in motion.

Called up from JV to take part in the varsity team’s postseason run, Triplett, wearing a black Elkton football hoodie, black shorts and purple and gold-colored cleats, is filling in as the scout team signal caller in an effort to help the Golden Elks defense prepare for Friday’s 2A East Region Championship and the many looks of North Caroline’s Wing-T offense.

Eighteen years after his late father, John, led the program to Cecil County’s first-ever state football championship, the last name Triplett is once again synonymous with Elkton football. Jayden joined his senior cousin Dah’mear and sophomore cousin Gregg as current players on the varsity roster who share the same last name and bloodline as one of the most prolific local running backs to ever play.

Dah’mear, a four-year contributor on varsity, earned a trip to next month’s Maryland Crab Bowl: a senior-only all-star game featuring the top football players in the state. Gregg, part of Elkton’s three-headed monster at running back, helped the team reach the region final with a go-ahead, 9-yard touchdown in the fourth quarter of last week’s 21-14 win over Harford Tech.

“It didn’t even dawn on me pulling Jayden up, but holy cow, that’s three Triplett boys. It’s been a great thing,” Elkton head coach Matt Feeney said. “John would definitely get a big smile on his face and laugh about it. He was the most happy, go-lucky person I ever met, always smiling, always upbeat. He would be 100 percent. I would have to keep him off the sidelines on Friday nights.

“Anytime you see that name in the paper, you hear that name being shared amongst coaches talking about quality kids that play for [Elkton], you swell a little bit with pride and you’re overcome with joy for the family overall.”

John passed away in December 2015 at the age of 32 — just 14 years after he graduated as one of the best Elkton athletes to ever strap on a football helmet. As a junior, his 162 yards and three touchdowns in the 1A title game delivered the program its only state crown. One year later, he finished third in the state with 2,032 rushing yards — the county’s single-season record that stood until now-graduated running back Raiquon Estep broke it in 2016 during the school’s most recent run to the state title game.

While Jayden has gone from primarily rushing the ball to throwing it, the freshman has kept close to his heart his father’s advice about rushing the football.

“I used to play running back for my whole life, but the coach asked me to play quarterback last year and I just accepted the opportunity. [My dad] was usually telling me: ‘Don’t really look back,’ ‘make one cut and go,' ‘don’t go backwards’ and ‘stop going side to side.' So I take that [to heart],” Jayden said. “A lot of people come up to me and say they remember my dad and what a good football player he was. I hear that a lot. It makes me really proud.”

Dah’mear, who has since changed his uniform to the No. 4, was the last Elkton player to wear No. 25 as a tribute to his uncle. The senior admitted he may go back to it again on Friday against North Caroline.

“After everyone found out who I was, I decided to change my number. I just wanted to carry that name on. I know he was one of the big factors in the state championship in 2000. I’m trying to bring one to Elkton in 2018,” said Dah’mear, who posted 29 catches for 670 yards and 12 touchdowns over nine regular season games. “I know that he’d be really proud of me and everything. I’ve got a lot of younger cousins, and I’ve got to teach them the pathway, to keep the name alive, keep doing good things on the field and in the classroom.”

Gregg, whose break-out performance came in a Week 3 win over Rising Sun when he rushed 11 times for 94 yards and two touchdowns, entered the postseason having piled up 417 yards. In a must-win regular-season finale against C.M. Wright, the sophomore also showcased his ability on defense by racking up a season-high nine tackles.

It shouldn’t be long before he shares the field — and potentially the same backfield — with Jayden on Friday nights.

“I think if John was here, he would be super proud of us. That’s all he wanted, too, was for me and [Jayden] to play on the same team. He wanted me to make it, too. He’d be really proud,” Gregg said. “All the time, I’m thinking about him. That’s my cousin that passed away. I always think about him every single day. I miss him. He was a really good guy.”

The trio of Tripletts aren’t the only members on the Elkton football team that strive to keep the legacy of the former running back alive. Feeney, born a few years before John, remembered coaching John prior to him playing in high school.

“When you talk about watching kids grow up as part of our community… you can see him out on that practice field down at Meadow Park and he’s running a thousand miles an hour, but he’s just laughing and having a good time. He was such a coachable kid,” smiled Feeney. “I wish I had the opportunity to coach him in high school but I was in college at that time.”

During the wake for Feeney’s brother, Zach, who tragically passed away in April 2015, John approached the Elkton football coach to share a story.

“When I came back [from college], my brother and him had formed a nice bond. My brother was a little bit older and a role model to him,” Feeney remembered. “John told me at my brother’s wake that he wore No. 25 because Zach wore No. 25. That struck a chord with me. John said he loved the way he played football and wanted to play football like him: hard nosed and don’t take anything from anybody. On the football field, he was going to come after you for four quarters, but off the football field, he was your buddy. That’s an homage right there that he wore that number because of him. I thought that was a big deal and I didn’t know that until after.”

That same year, Elkton pushed through with its first playoff appearance under Feeney, who took over the program prior to the 2014 campaign. Since then, the Elks have rattled off the second-most road playoff wins in the state and even earned a berth in the state title game for the first time since John carried the ball in purple and gold.

Another trip to Annapolis this season, with a roster featuring the Triplett’s next generation, would be a fitting tribute to the family member who started it all.

“I’ve seen a couple plays, but not a lot of plays [of my dad]. I always wanted to see it,” Jayden said. “Sometimes when I make a big play, I know that he’s over me and he’s watching and I made him feel good.”