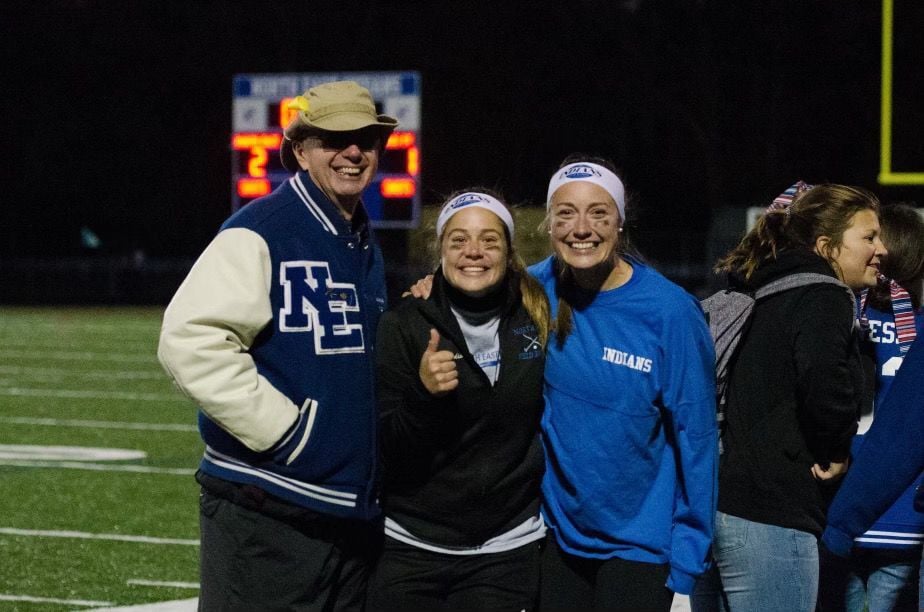 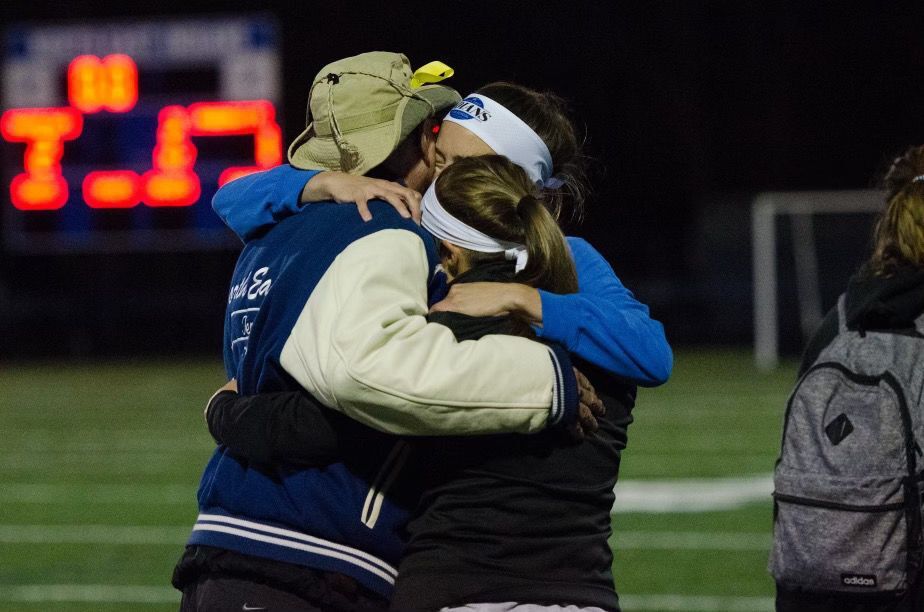 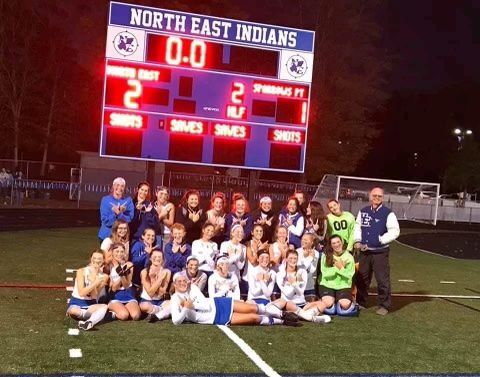 Coach Dave Spencer became the first tennis coach in the history of North East High School in 1975, when the sport was new to the public schools across the county. Now as he coaches his 100th season, Spencer is still helping students learn the skills they need to improve on the field, with the help of some of his unique do-it-yourself equipment.

“It’s been so rewarding to me to be a part of so many lives over these 100 seasons,” said Spencer.

He retired in 2004 from being a head coach, but he still volunteers in field hockey and tennis.

“I really enjoy seeing someone get better at something,” said Spencer. “Especially when they start not knowing about a sport, to watch the growth of a person is special.”

Spencer describes himself as a “skill and drill” coach, focusing on improving students’ technique and fundamentals. He is known for a variety of unorthodox tactics to help people improve.

The current coach of the field hockey team, Kendie Hudson, said some of his out-of-the-box ideas include creating rebound boards for the team, and having the team alternate between smaller and bigger balls to see how that would impact their play. Many students specifically ask for time to work with coach Spencer because of his positive reinforcement and how he views the sport differently than most people.

“He’s very patient, very kind; he will make you feel good about yourself no matter what, while being instructive,” said Hudson. “As a 27-year-old, even though he’s in a volunteer role now, I look up to him a lot.”

One tennis drill of his had players hold pool noodles in their arms to keep their elbows tucked in when serving, another had students try to hit a shot into the box from outside the tennis court fence. One gadget was a tennis racket, with the head replaced simply with a string with a tennis ball at the end of it to practice serving technique.

Along with his main sports of field hockey and tennis, he also coached junior varsity girls basketball for 15 years. As a head coach he earned 100 wins in all three sports with a winning percentage over 50%.

“You don’t pat yourself on the back. The kids work hard, and it’s really the kids game. It’s always in the end about the kids having the most fun that they can have, with the best skill that they can manage,” said Spencer. “I think that was the most important thing for me. The numbers just kind of appear if you do some of the right things.”

Spencer, though he is competitive, is focused on improving his players. He knows that oftentimes you can play the best game of your life and still lose against a superior opponent but that doesn’t mean you are a failure.

“I’ve walked off a hockey field thinking, gosh, that’s the best we could and I’ve lost. I can say we made a mistake somewhere or we didn’t have the luck or whatever,” said Spencer. “But when you play, the best you can play and you get beat. That’s just to me, it’s a great feeling. The kids don’t think that way but eventually they understand how good they played.”

Spencer said oftentimes as a coach he would have to manage egos and personalities as much as develop athletic skills. He would often use drills that force players to help each other, showing that players can contribute no matter their skill set. In basketball, for example, someone who is bad shooter, can help the team by passing the ball or rebounding.

“If you look to do your best with the skills that you have, you help not only yourself but everybody else,” said Spencer.

One year the field hockey team started with a 1-5 record. Spencer cut up a field hockey stick so every kid would have a piece of it. Then every practice they would have to put their pieces back together to form a new stick, showing that every player has an important role for winning. That team came in second place in the state tournament.

The most recent county champion, Karley Mcilhatton, a 2019 graduate of North East currently attending University of Maryland, still plays tennis with him at least once a month. Like most of his former players Mcilhatton refers to Spencer as “Spence.”

“I think coach Spence just had a very positive impact on a lot of his players,” said Mcilhatton. “I think we just clicked very well.”

Grant Handley, a 2018 North East graduate, joined the tennis team as a senior. He previously played on the Track and Soccer team. He said despite being a senior, who would only be with the team for a few months, Spencer put a great amount of effort into teaching him.

“It was just really impressive how well he knew the game. He would be looking down or he’d be walking around,” said Handley. “He could hear how I hit a ball. And he could tell me what I did wrong. He’s very impressive, and his delivery was always gentle.”

Handley made the all county honorable mention team in mixed doubles.

“He really invested in a senior like me who joined tennis because it looked like fun,” said Handley. “It was so enjoyable. It was the most fun I ever had playing in high school sport. I love soccer, and I respect track, but I really looked forward to tennis practice.”

Spencer worked as a Math Teacher at North East for 38 years. He said he wanted to be a teacher since he was in the 9th grade. Spencer’s parents were raised in an orphanage and ended up working for an orphanage as well. Spencer helped his parents, so he was around other children constantly growing up. Spencer surprisingly never played tennis in college or high school, instead picking up tennis around the same time as he became a coach. He made an effort to learn rapidly even going to the Dennis Van Der Meer tennis coaching camp in South Carolina.

In 1986, tragedy struck when North East student and field hockey player Susan Magdeburger, died in a car accident. Despite dealing with the loss of a teammate, the team made it to the state semifinals, taking her skirt with them to the game as a memorial.

“She was one of those people that would help you do anything,” said Spencer on Magdeburger. “help the team do anything, do anything for the team, you know? And people like that kind of get to you. You can have people in there are great players and they may not get to you. But some people do. “

Magedeburger’s father later paid for Spencer to attend a field hockey training camp, since Susan had always wanted Spencer to learn more about the game.

Spencer served as North East’s Athletic Director for 16 years. The current athletic director, Gary Brown, who took over from Spencer in the 90s, said Spencer’s guidance was necessary in understanding the nuances of the position, such as ensuring equipment like shot clocks and Public Address systems were set up properly before games.

“He thinks things through, you can sit there with him and ask him a question, and you can tell he’s thinking,” said Brown. “He doesn’t say anything at all, until he has the chance to kind of go over in his head, the different variables that may be taking place, and try to think of what might be the best solution.”

Along with his work as a volunteer coach, Spencer teaches Sunday school at Elkton Presbyterian Church and works part time at the Michael M. Coldren Company in North East working on antique locks and hinges. The business is owned by the family of Ben Coldren, who played for the Salisbury University tennis team after playing under Spencer in the early 90s. Cauldron said that out of all his coaches Spencer cared the most.

“It means a lot when you see a coach put in that much effort,” said Coldren. “It makes you want to perform better.”