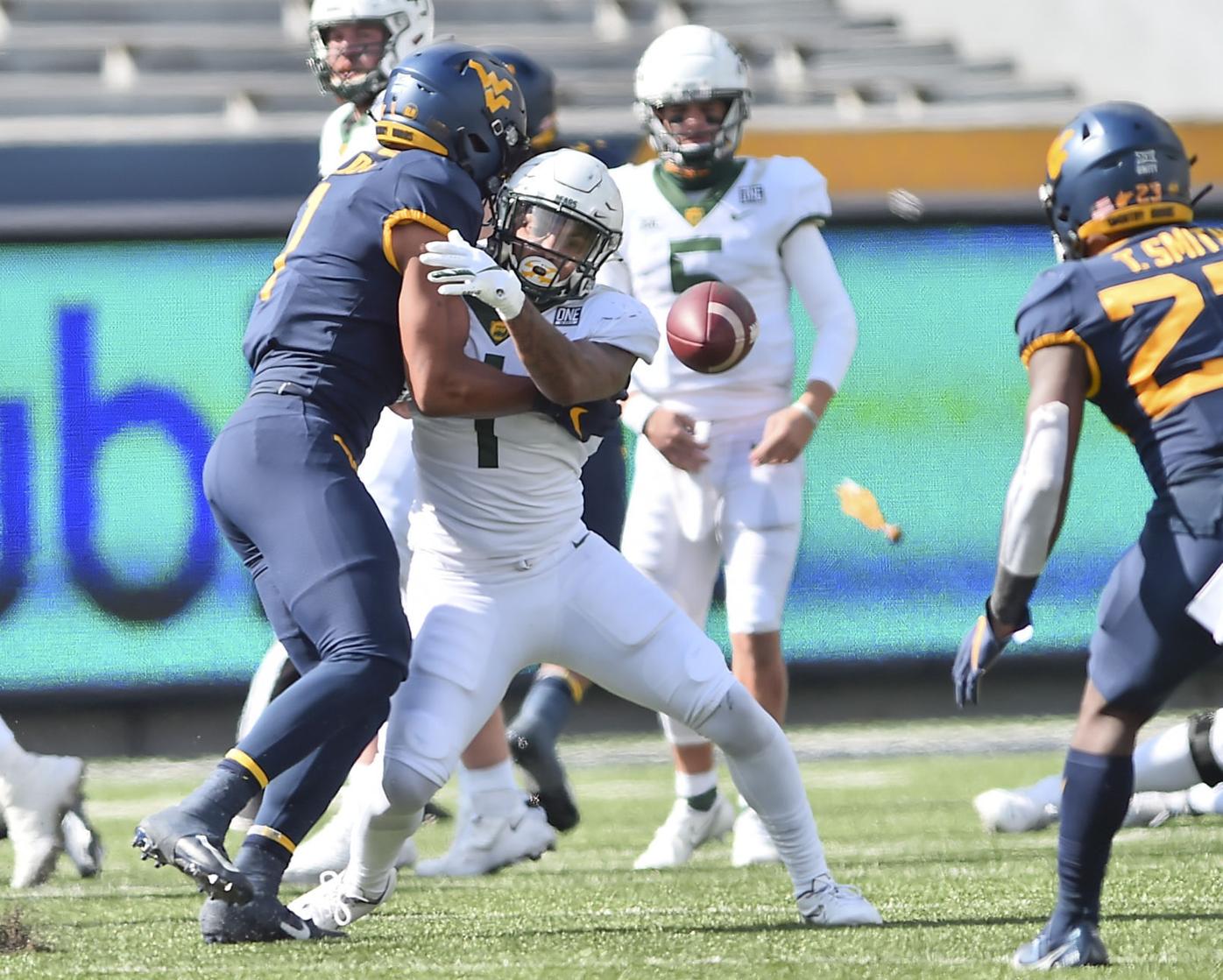 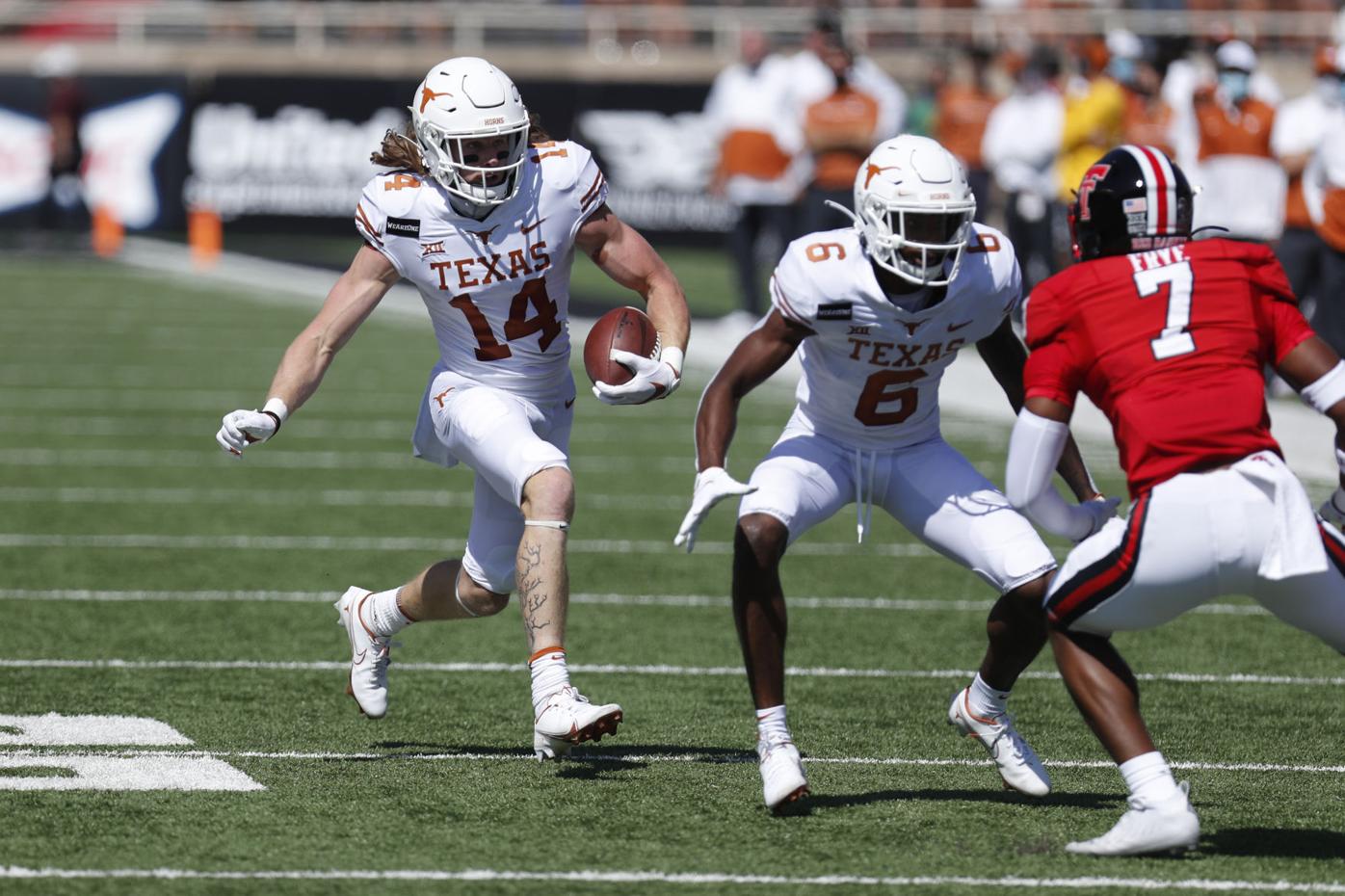 Texas wide receiver Brenden Schooler carries the ball after a reception during the first half of an NCAA college football game against Texas Tech, Saturday Sept. 26, 2020, in Lubbock, Texas. (AP Photo/Mark Rogers)

Texas wide receiver Brenden Schooler carries the ball after a reception during the first half of an NCAA college football game against Texas Tech, Saturday Sept. 26, 2020, in Lubbock, Texas. (AP Photo/Mark Rogers)

MORGANTOWN, W.Va. (AP) — Tony Fields had the desert in his blood growing up in Las Vegas and as a three-year starter at Arizona.

Heading to the tree-lined hills of West Virginia might seem like a whole ‘nother world. For Fields, it was an easy choice.

“I like nature, so coming out in West Virginia, it wasn’t a real problem for me because I like the trees, I like the atmosphere here,” Fields said. “It’s good to get away from the heat every now and then.”

Fields is putting the heat on opponents back East, making an immediate impact at middle linebacker since coming to West Virginia over the summer as a graduate transfer.

Fields leads the Big 12 with 29 tackles and also has an interception and a sack. The team’s second-leading tackler is a New Hampshire transfer, Alonzo Addae.

Both came to the Mountaineers by way of Addae’s cousin, West Virginia cornerbacks coach Jahmile Addae, who spent five seasons as an assistant at Arizona. Jahmile Addae originally recruited Fields to Arizona.

Fields was pivotal in a double-overtime win over Baylor last Saturday with 10 tackles when West Virginia leaned on its defense because the offense was having problems getting traction.

West Virginia coach Neal Brown refers to Fields as a “train stopper,” someone who can lead during times of adversity.

“He’s got a calmness about him,” Brown said. “He’s always cognizant of how young we are and what kind of example he’s setting. And I appreciate that.

“I told him we need you to come in and make plays. But we also need somebody that we can point to and say, hey, this is how you react. This is how you prepare. And he’s done that for us.”

As experienced as Fields is, he’s getting to see something new, as many transfers do. In this case, it’s the mid-Atlantic’s fall foliage and, eventually, frigid weather.

“Expecting the cold coming up soon, I don’t know about how I’m going to feel about that, though,” Fields said.

Other graduate transfers are already making impacts at their new schools:

All the ex-Stanford transfer did in his first game with the Bulldogs was throw for an SEC-record 623 yards and five touchdowns in a 44-34 win over LSU. Costello cooled off last week against Arkansas, throwing for a touchdown with three interceptions, giving him five picks already on the season. His average of 468 passing yards per game leads the nation.

The Kansas transfer has provided a big lift to a No. 19 Virginia Tech squad hit hard by a combination of the coronavirus and injuries. He ran for 208 yards last Saturday at Duke, including the go-ahead score on a 60-yard run with 2:20 left. He also had an 83-yard kickoff return. Herbert leads the nation at 156 yards per game and is averaging 12 yards per carry.

The Houston transfer is completing 67% of his pass attempts and has thrown six touchdown passes in three games without an interception for the seventh-ranked Hurricanes. Miami coach Manny Diaz has emphasized getting more explosive plays in the passing game, and King has delivered. He threw TD passes of 47 and 75 yard in a win over Louisville and scoring throws of 24 and 40 yards in a win over Florida State.

The ex-Florida quarterback helped the Razorbacks end a 20-game losing streak in the SEC against Mississippi State last week.

Schooler is a double transfer, having gone from Oregon to Arizona to the 22nd-ranked Longhorns. In two games, he has 10 receptions for 123 yards and two TDs. His brother, Colin, an Arizona grad transfer, is a starting linebacker at Texas Tech.