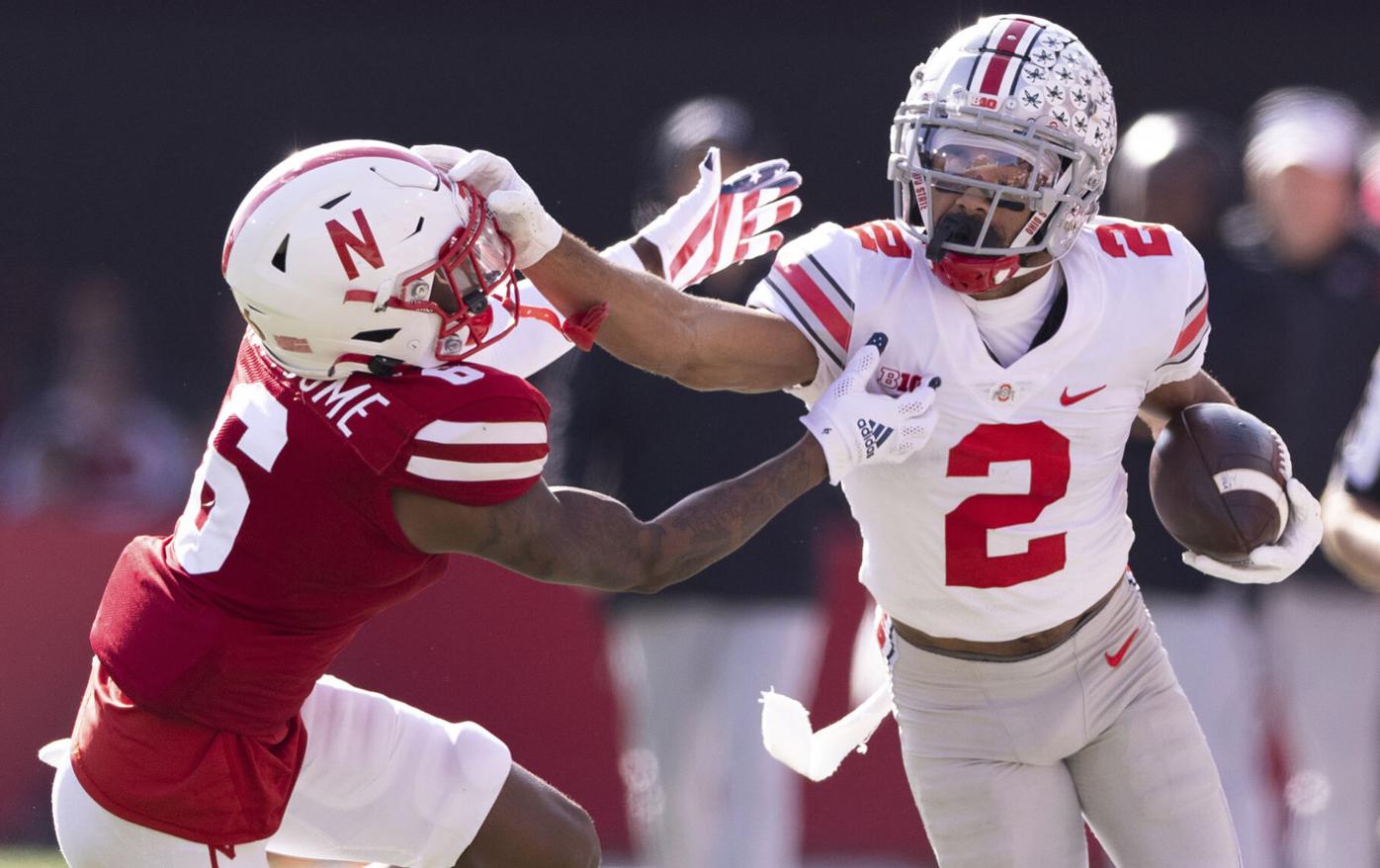 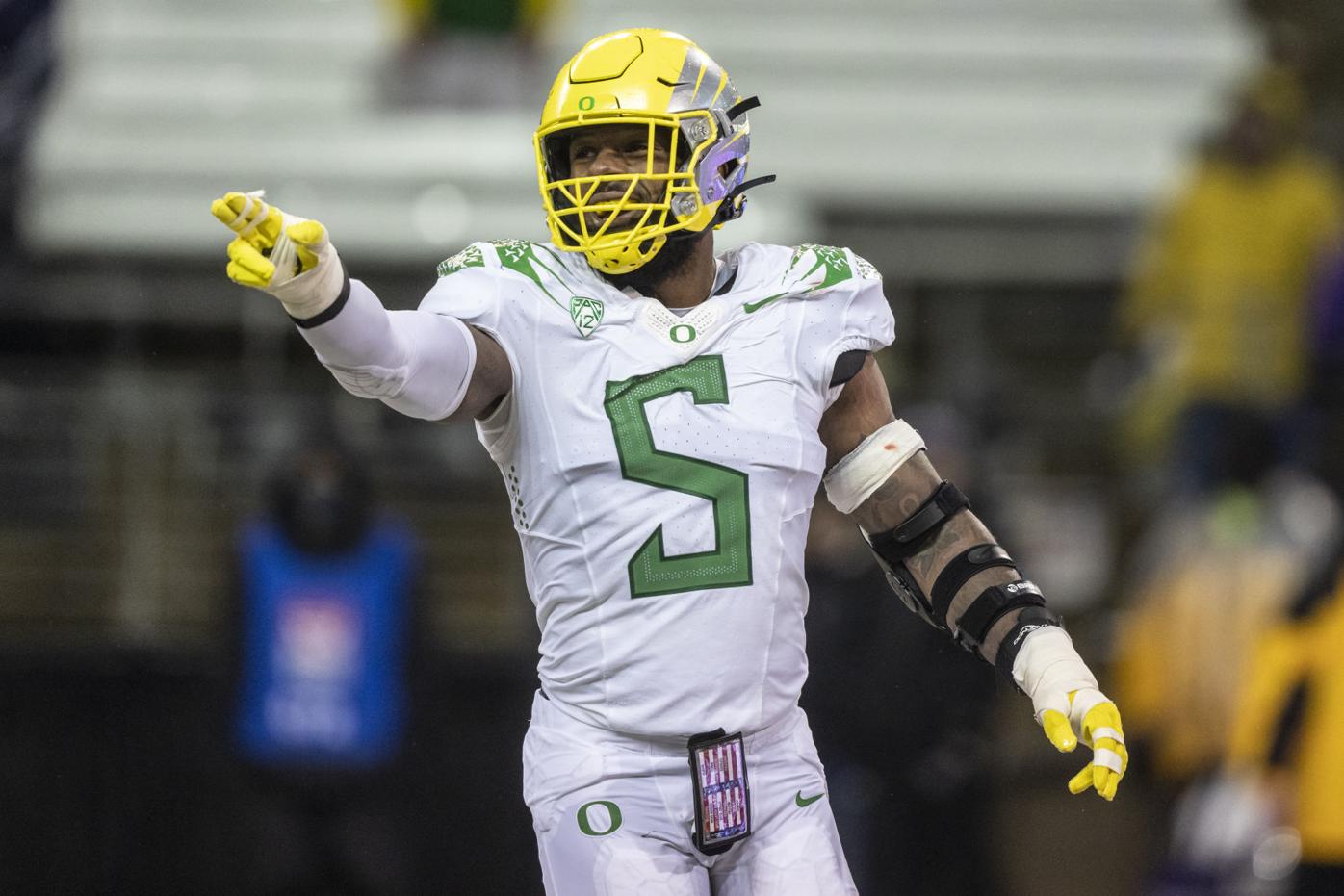 Oregon defensive end Kayvon Thibodeaux celebrates after his team scored a safety during the second half of an NCAA college football game against Washington, Saturday, Nov. 6, 2021, in Seattle. (AP Photo/Stephen Brashear)

Oregon defensive end Kayvon Thibodeaux celebrates after his team scored a safety during the second half of an NCAA college football game against Washington, Saturday, Nov. 6, 2021, in Seattle. (AP Photo/Stephen Brashear)

Associated Press college football poll voters are grappling with how too handle head-to-head results in a season that has been filled with twists and turns.

Georgia has made things easy as far as voting for No. 1 in the AP Top 25 presented by Regions Bank. The Bulldogs have been a unanimous top-ranked team for five straight weeks. What comes after has been more complicated. The difference between No. 2 Cincinnati and No. 3 Alabama is down to just four points. Oklahoma is 30 points behind in fourth.

The most notable move after a weekend in which seven ranked teams lost came next.

For the first time in a month, Oregon moved ahead of No. 6 Ohio State, putting the Ducks at No. 5 by four points.

Oregon reached as high as No. 3 in the nation after it beat Ohio State in Columbus on Sept. 11, but then a loss on the road at Stanford sent the Ducks tumbling.

The Buckeyes proceeded to blast its lesser competition while the Ducks needed late defensive stands against California and UCLA to avoid a second loss.

Facing more lively competition the last two weeks, the Buckeyes have not looked so dominant. Meanwhile, Oregon has kept rolling along.

Maybe encouraged by College Football Playoff selection committee — which had Oregon fourth and Ohio State fifth in its first rankings last week —- AP voters decided to default back to the head-to-head result.

Elsewhere, in the poll though, some head-to-head results are not being honored.

Head-to-head results don't have to be the deciding factor in ranking teams. If it was, Purdue would be top-10.

However, there are a few spots with Baylor, BYU, Wisconsin, Iowa, Penn State and Auburn where Reality Check believes the games played on the field should have been given more weight.

Next: at Tennessee, Saturday.

Reality check: Stetson Bennett is giving coach Kirby Smart no reason to make a change at quarterback with a 197.34 efficiency rating that ranks third in the country. But having JT Daniels as a backup is nice.

Next: at South Florida, Friday.

Next: vs New Mexico State, Saturday.

Reality check: Will Anderson Jr. for Heisman. The outside linebacker who leads the nation in tackles for loss (21 1/2) suddenly seems like a viable candidate in a season that lacks obvious more traditional candidates.

Reality check: While most of the other contenders struggled or lost, OU was resting and getting read for a stretch run that also includes Iowa State and No. 10 Oklahoma State and a likely Big 12 title game.

Next: vs. Washington State, Saturday.

Reality check: The Ducks have allowed an average of 94 yards rushing and 2.84 yards per carry over the last three games with LB Noah Sewell leading the way.

Next: vs. Purdue, Saturday.

Reality check: The Buckeyes decided their best offensive line combo included tackles moved to guard. It's a talented group, but maybe that helps explain their issues getting the running game rolling against Penn State and Nebraska.

Ranked: Little low, but definitely behind the Ducks.

Next: at Virginia, Saturday.

Reality check: Not quite a full-blown breakout season for former elite recruit WR Kevin Austin, but he leads the team with 531 yards receiving and five touchdown catches.

Ranked: Feels too high, but the Irish did beat Purdue.

Next: vs. Maryland, Saturday.

Reality check: Opponents have decided the way to attack the Spartans' defense is through the air. No team has faced more passes per game (47.9) and that has led to 327 yards passing per game, last in FBS.

Next: vs. TCU, Saturday.

Reality check: Cowboys have become the Big 12's answer to Iowa with the worst non-Kansas offense in the conference, but a smothering defense that has yet to allow more than 24 points in a game.

Next: at No. 12 Mississippi, Saturday.

Reality check: Who would have guessed that the Aggies' best passing game of the season, the only one in which they completed more than 62% and broke 9 yards per attempt, would come against Alabama? A&M's only other 200-yard passing performances were against Kent State and New Mexico.

Reality check: After sacking Liberty star Malik Willis nine times, the Rebels are now tied for the national lead with 34. It's a boom-or-bust approach for Ole Miss, which still ranks near the bottom of the SEC in D.

Next: vs. No. 21 North Carolina State, Saturday.

Reality check: The worst defense among ranked teams (5.92 yards per play) finally caught up to the Demon Deacons.

Ranked: About right. Can we get a Wake-Ole Miss bowl game?

Reality check: Cougars were worked over by Baylor a few weeks back, which seems to have gotten lost on the voters.

Next: vs Southern Miss, Saturday.

Reality check: Roadrunners are top-10 in the country in both turnover margin (plus-10) and fewest penalties (4.3 per game). They're not going to beat themselves.

Next: vs. Mississippi State, Saturday.

Reality check: Coming off two of the best SEC games of his career, QB Bo Nix hit the wall against Texas A&M. Lack of a high-level receiver has been a problem all season, too.

Next: at Temple, Saturday.

Reality check: Special teams have been a problem. The Cougars allowed three kickoff return TDs and have made only 10 of 16 field-goal attempts.

Reality check: Bears' pass defense has been getting exposed lately (363 yards per game in the last three). That's not a great place to be with the Sooners coming to town.

Next: vs. Minnesota, Saturday.

Reality check: QB Alex Padilla relieved a banged-up Spencer Petras against Northwestern and provided a solid game (18 for 28 passes for 172 yards). So who starts now?

Next: vs, Northwestern, Saturday.

Reality check: Badgers have allowed 37 points during their five-game winning streak after allowing 38 in their last loss to Michigan.

Ranked: Should be ahead of Iowa at least.

Reality check: The offense has become all QB Devin Leary. Wolfpack have run for 130 yards combined in the last two games.

Next: vs. Georgia State, Saturday.

Reality check: QB Grayson McCall, who leads the nation in passer rating, is out indefinitely with an upper-body injury. It wasn't a problem against Georgia Southern, but for a team with no margin for error as it tries to chase down Appalachian State, it could be a big one.

Reality check: From 2016-19, Penn State never had fewer than 34 rushing touchdowns in a season. The Nittany Lions have 10 this season.

Ranked: Wins over Wisconsin and Auburn suggest too low.

Next: at Troy, Saturday.

Next: vs. North Carolina, Thursday.

Reality check: QB Kenny Pickett and the Panthers have scored at least 50 four times this season. The last time Pitt did that was 1905.

Purdue probably deserved to be ranked, but considering the way the Boilermakers have played while unranked, maybe they're better off this way heading to Ohio State.

Follow Ralph D. Russo at https://twitter.com/ralphDrussoAP and listen at http://www.appodcasts.com