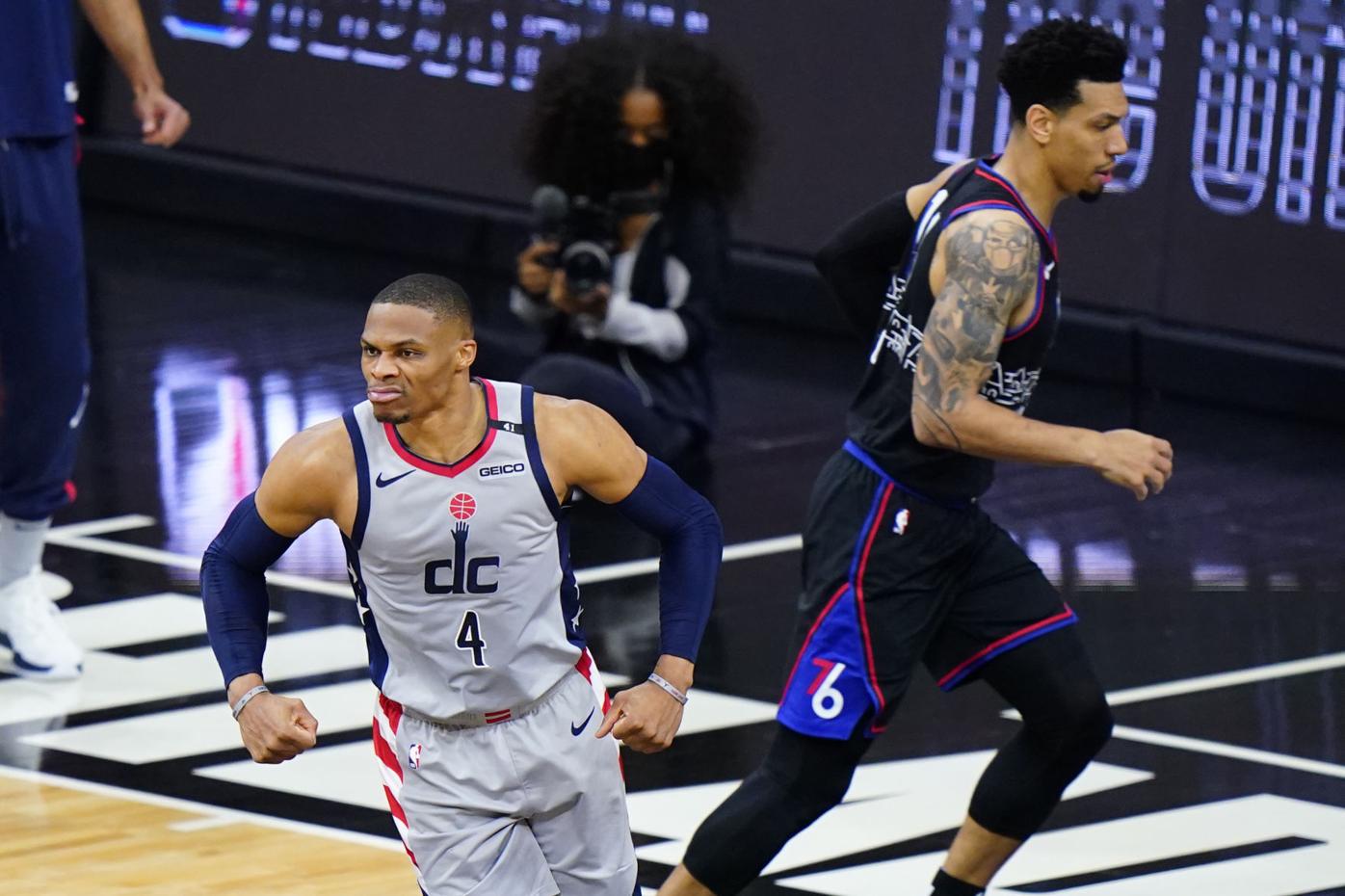 Washington Wizards’ Russell Westbrook, left, reacts past Philadelphia 76ers’ Danny Green after a dunk during the first half of Game 2 in a first-round NBA basketball playoff series, Wednesday, May 26, 2021, in Philadelphia. 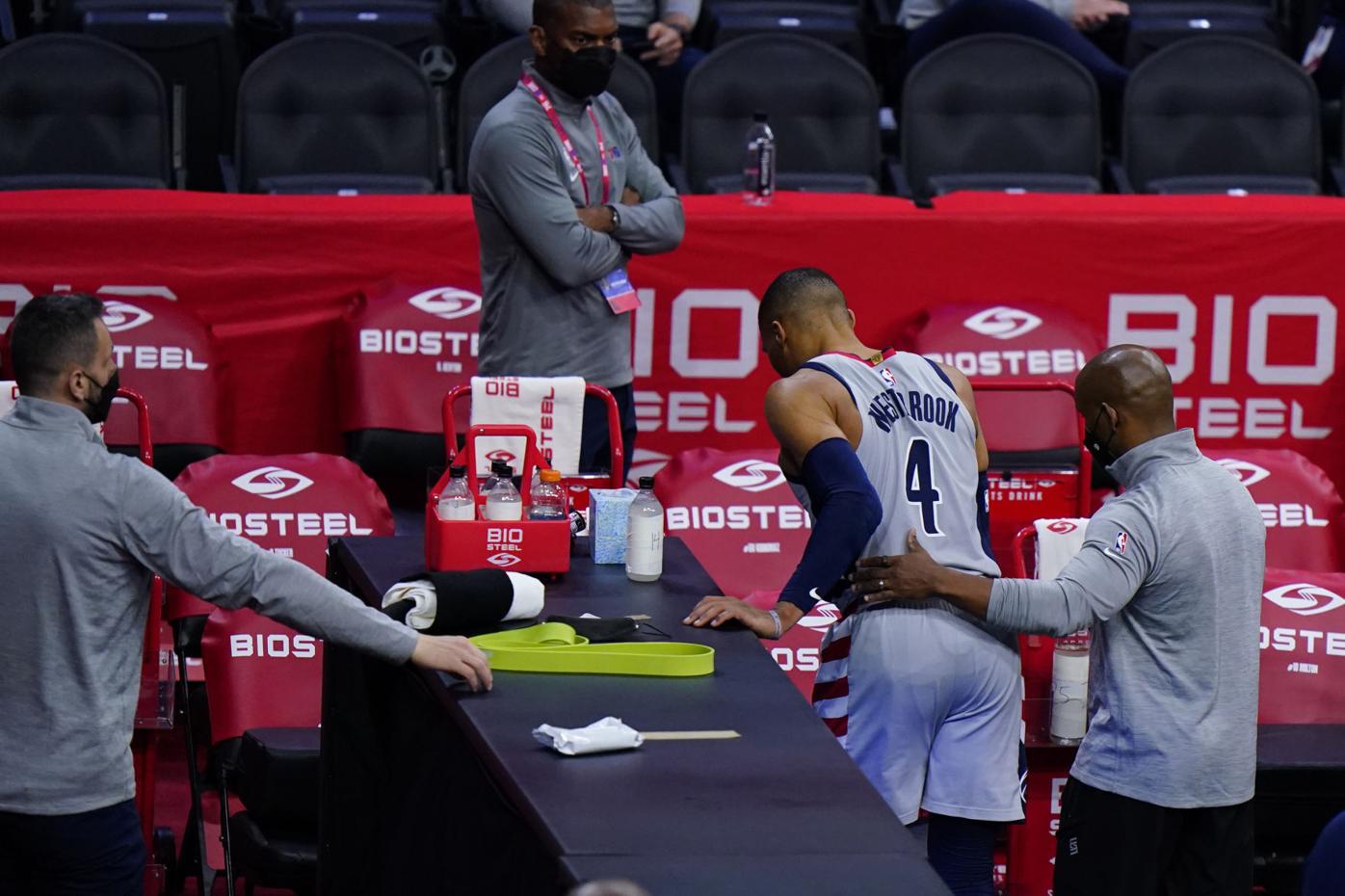 Washington Wizards’ Russell Westbrook (4) is helped to the locker room after an injury during the second half of Game 2 in a first-round NBA basketball playoff series against the Philadelphia 76ers, Wednesday, May 26, 2021, in Philadelphia.

Washington Wizards’ Russell Westbrook, left, reacts past Philadelphia 76ers’ Danny Green after a dunk during the first half of Game 2 in a first-round NBA basketball playoff series, Wednesday, May 26, 2021, in Philadelphia.

Washington Wizards’ Russell Westbrook (4) is helped to the locker room after an injury during the second half of Game 2 in a first-round NBA basketball playoff series against the Philadelphia 76ers, Wednesday, May 26, 2021, in Philadelphia.

PHILADELPHIA, PA — The Philadelphia 76ers said Thursday that they have immediately revoked the season-ticket membership from the fan who threw popcorn on Washington guard Russell Westbrook, plus banned him from all events at their arena indefinitely.

The fan, who was not identified by the team, threw the popcorn onto Westbrook as the Wizards’ guard was leaving Wednesday night’s game at Wells Fargo Center with an ankle injury.

“We apologize to Russell Westbrook and the Washington Wizards for being subjected to this type of unacceptable and disrespectful behavior,” the 76ers said in a statement announcing the ban. “There is no place for it in our sport or arena.”

The NBA agreed, saying Thursday that its rules on fan behavior will be “vigorously enforced in order to ensure a safe and respectful environment for all involved.”

NBA buildings are welcoming their largest crowds of the season for the playoffs, after a regular season where attendance was severely limited because of policies put in place to keep players and others safe during the pandemic.

It has not been without problems, and players are airing concerns.

The popcorn incident with Westbrook came on the same night where fans in New York directed profane chants at Atlanta guard Trae Young in Madison Square Garden, just as they had in the series opener there on Sunday.

And Brooklyn guard Kyrie Irving — in advance of Game 3 of the Nets’ series at Boston — said he hoped the scene there on Friday night “is strictly basketball, there’s no belligerence or any racism going on, subtle racism, people yelling (expletive) from the crowd.”

“The return of more NBA fans to our arenas has brought great excitement and energy to the start of the playoffs, but it is critical that we all show respect for players, officials and our fellow fans,” the NBA said Thursday.

Westbrook has been part of high-profile incidents involving fans before, including one where a fan in Utah was alleged to have directed racial taunts his way. Westbrook was fined $25,000 for his reactions to that incident, one in which Utah guard Donovan Mitchell even came to his defense.

“These arenas, they’ve got to start protecting the players. We’ll see what the NBA does,” Westbrook said Wednesday night. “I’ve been in a lot of incidents where fans, they say whatever, and the consequences for me are a lot more detrimental to those people in the stands because they feel like they’re untouchable.”

After the Westbrook incident in Utah two years ago, the league changed and toughened its code of conduct for fans, including putting those in closest proximity to the players and the court on alert that anything over the line will lead to ejections and possibly more.

Players such as Westbrook and LeBron James — who chimed in on Twitter shortly after the Westbrook incident Wednesday — still clearly believe that fan behavior remains a major issue.

“I’m sick and tired of it, honestly,” Westbrook said.