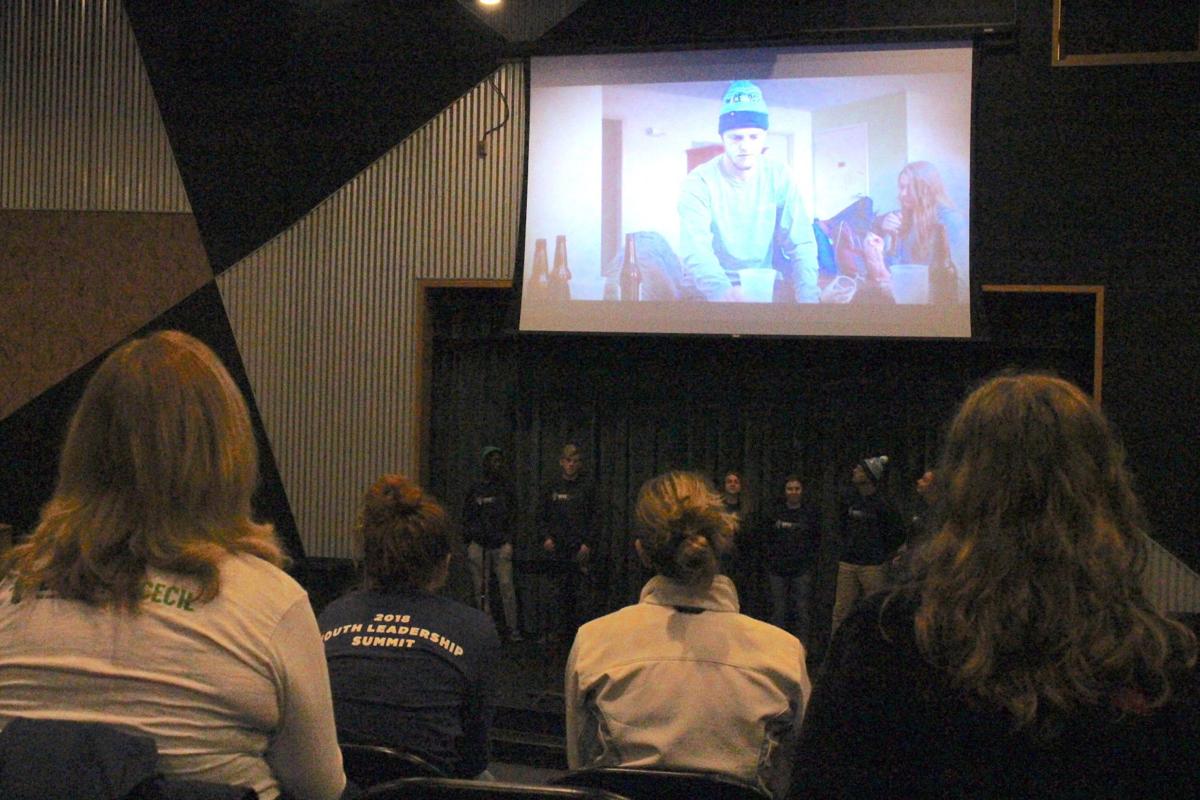 Attendees watch a screening of the PSA developed by North East High School about the effects of youth alcohol use during the Nov. 9 screening at NorthBay. 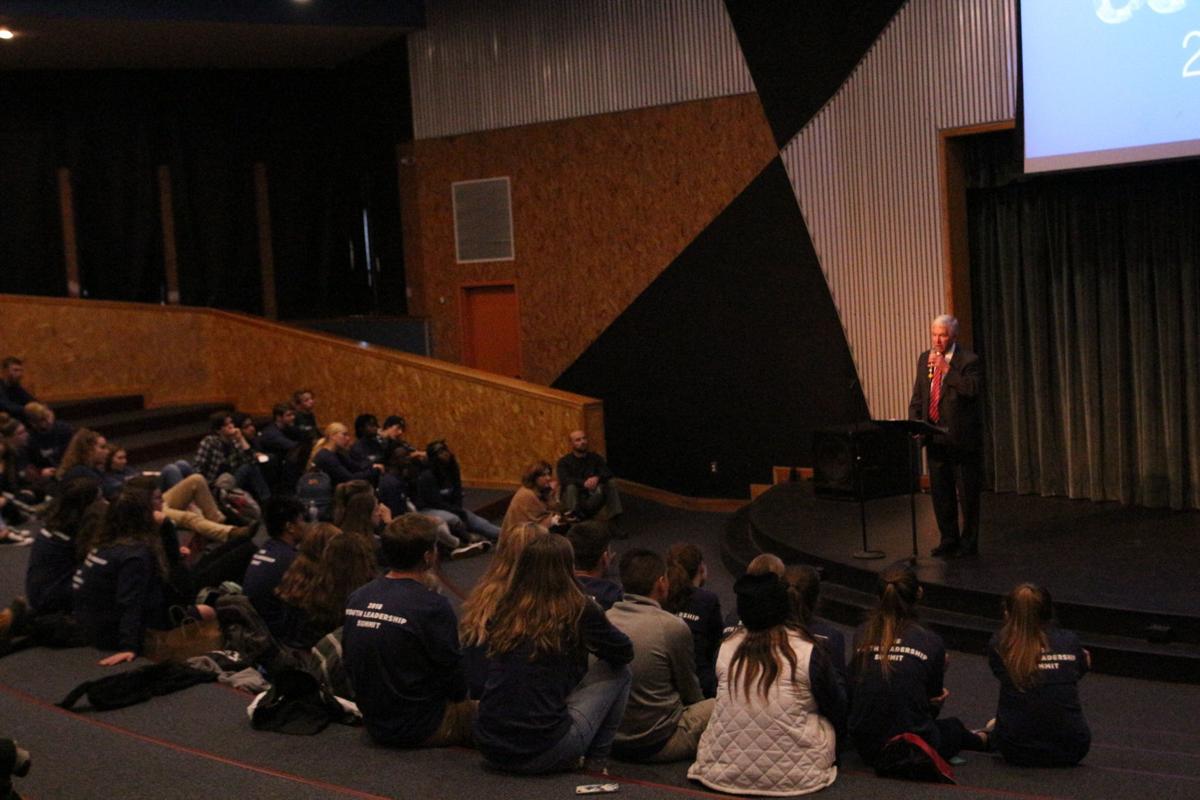 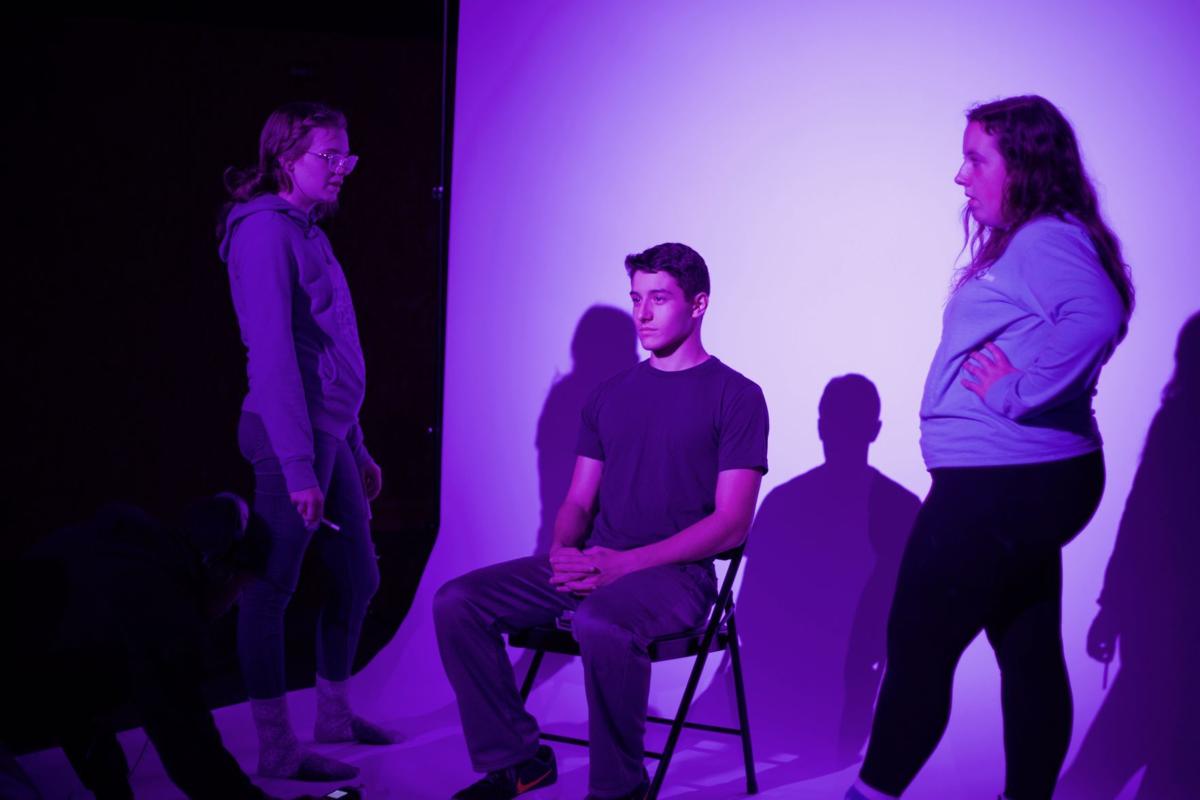 Members of the Rising Sun High School youth coalition discuss how to film their PSA on the dangers and consequences of tobacco use. 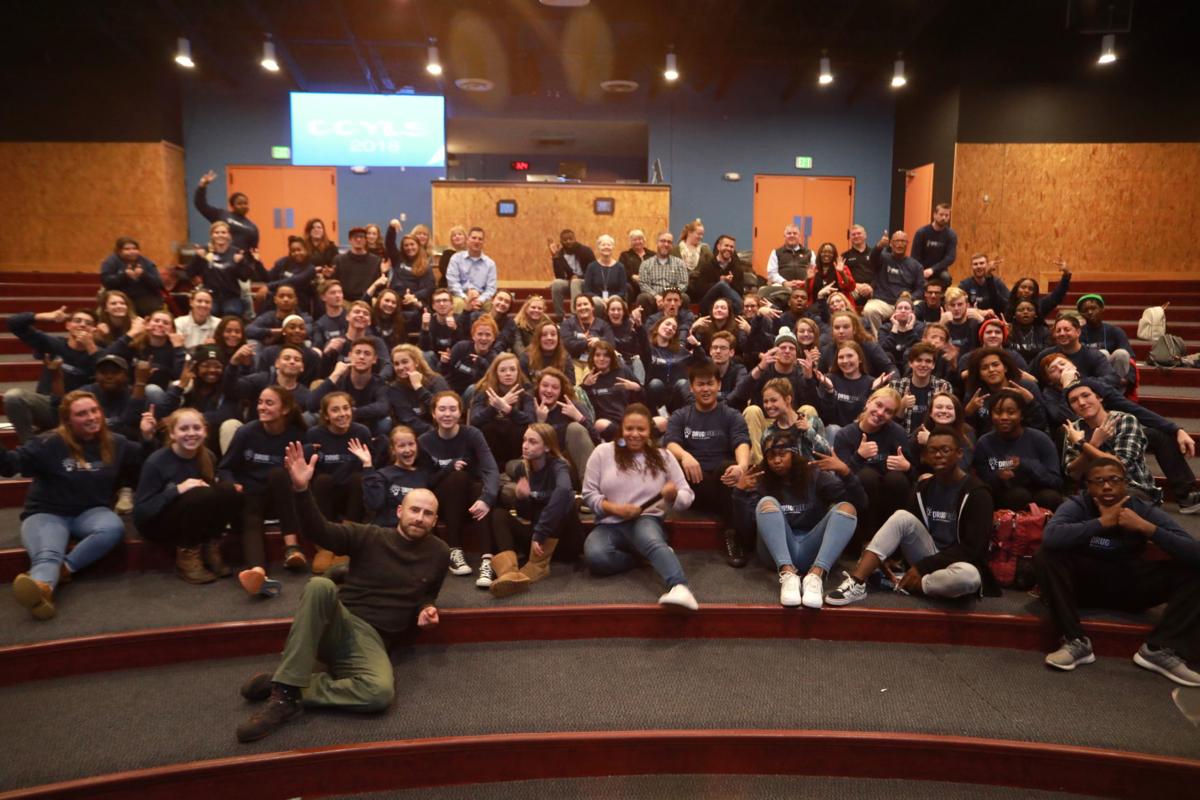 The participants of the 2018 Cecil County Youth Leadership Summit pose for a photo at NorthBay along with their advisors, county officials and members fo the Cecil County Drug-Free 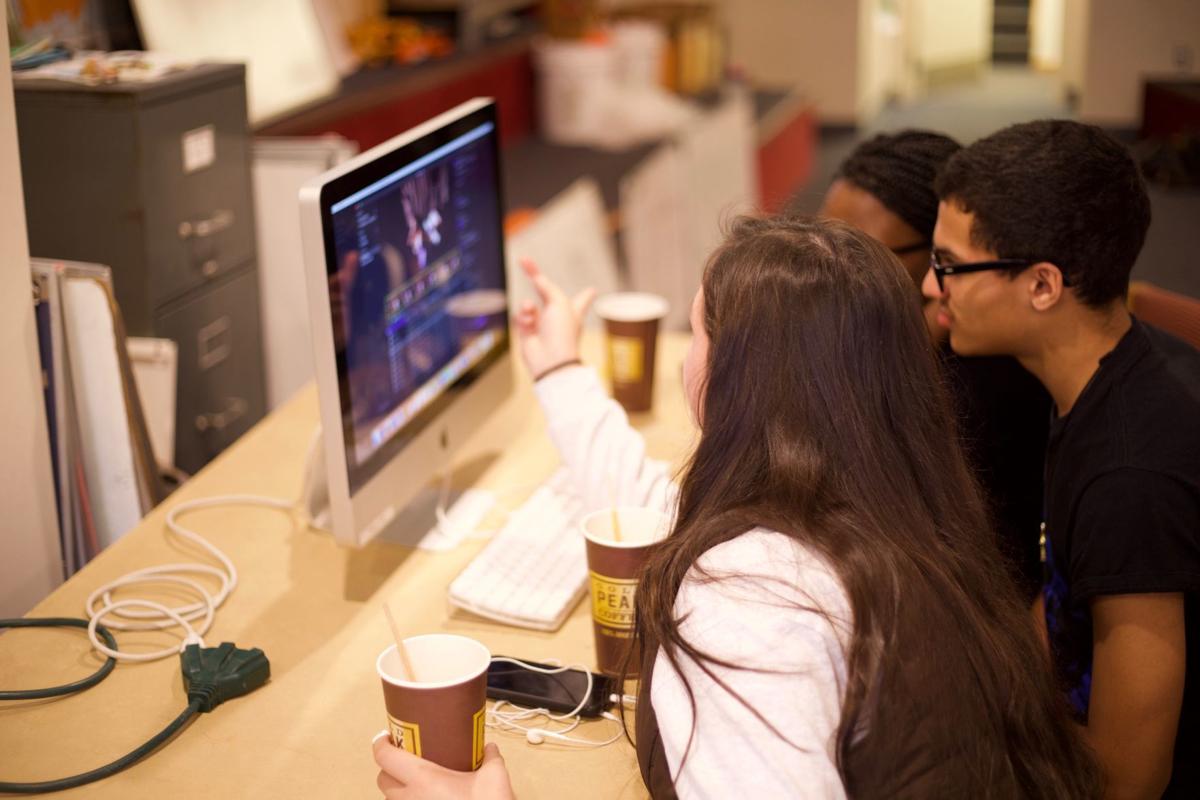 Youth summit participants work on editing their PSA after filming either this month. The ads will begin airing next year to county audiences. 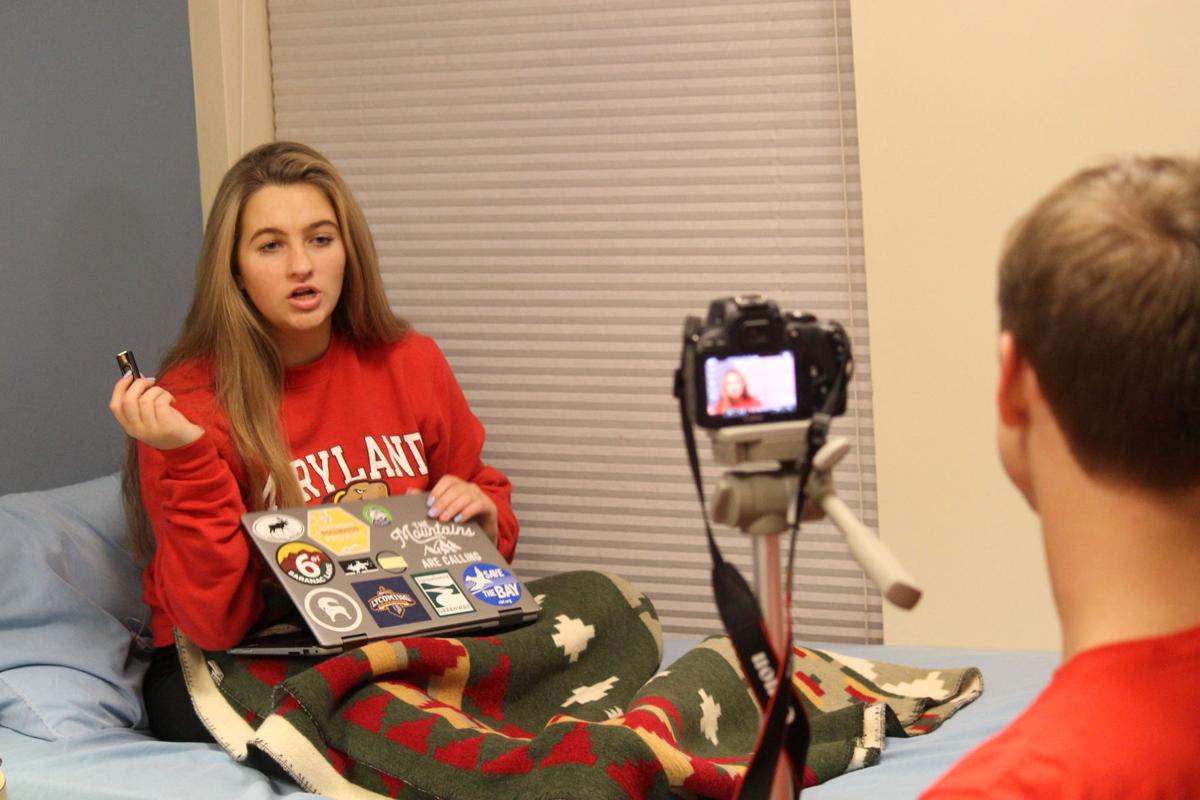 Members of the Bohemia Manor High School youth coalition film a tongue-in-cheek, 15-second ad spot on vaping and the use of Juul. 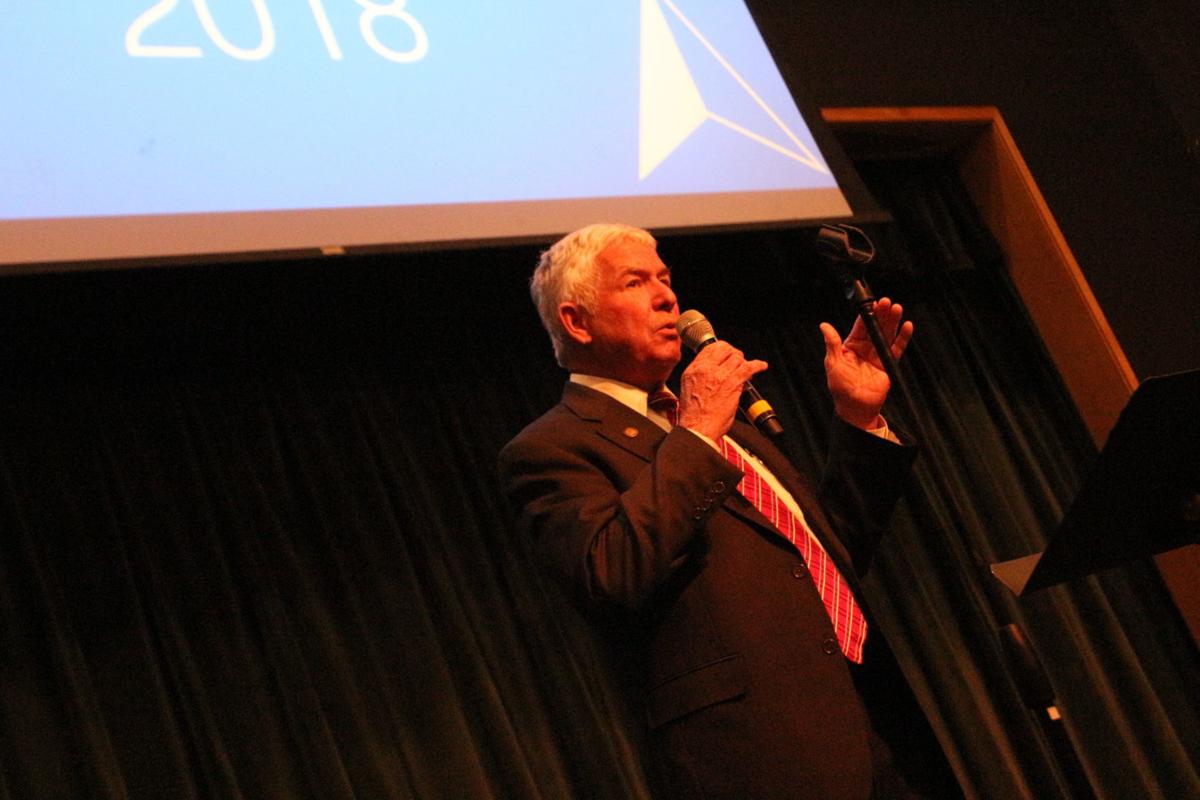 Attendees watch a screening of the PSA developed by North East High School about the effects of youth alcohol use during the Nov. 9 screening at NorthBay.

Members of the Rising Sun High School youth coalition discuss how to film their PSA on the dangers and consequences of tobacco use.

The participants of the 2018 Cecil County Youth Leadership Summit pose for a photo at NorthBay along with their advisors, county officials and members fo the Cecil County Drug-Free

Youth summit participants work on editing their PSA after filming either this month. The ads will begin airing next year to county audiences.

Members of the Bohemia Manor High School youth coalition film a tongue-in-cheek, 15-second ad spot on vaping and the use of Juul.

ELK NECK — Next year a new batch of cleverly crafted ads will begin airing on TVs and computers across the county.

What viewers may not know is that the directors, actors and writers for these public service announcements haven’t even graduated high school yet.

They’re the work of the fourth annual Cecil County Youth Leadership Summit, which brought several dozen Cecil County Public Schools students from all five high schools, and the Cecil County School of Technology, to NorthBay Adventure Camp on Nov. 7-9 to design billboards and create short PSAs that will teach their peers about the dangers of drug and alcohol abuse.

“The whole idea of the campaign is to have a youth-led, adult-guided project. We want youth talking to youth. You go to a lot of meetings, you see a lot of adults but you seldom see the youth at the table,” said Virgil Boysaw Jr., coordinator of the county’s Drug-Free Community Coalition, which hosted the summit in partnership with NorthBay and CCPS. “We have to get the youth, we’ve got to get them involved.”

But while the opioid abuse crisis has grabbed headlines, many of the PSAs designed by the students dealt with situations and topics that might be more relatable to the average high schooler. To develop the campaigns, students worked in groups with others from their school with help from NorthBay educators.

The PSAs will eventually be posted on the coalition website’s DrugFreeCecil.org, the county health department’s drug abuse website RewriteYourScript.org, school websites and on social media. They also will be airing on channels selected by DFCC officials that target youth demographics, as last year’s campaign did over the summer, reaching tens of thousands of users.

The students gave a first look at their work on Nov. 9 during a screening for County Executive Alan McCarthy and members of the DFCC, a federally-funded coalition tasked with youth drug and alcohol prevention in local communities.

“The drug abuse epidemic I believe is the most important issue facing Cecil County, the state of Maryland and the entire nation. In Cecil County alone, over 50 of your fellow citizens have died from opiate overdoses this year,” McCarthy told the assembled students. “When I grew up, these drugs didn’t exist. So consequently nobody died from them; automobile accidents killed the majority of people in my generation. But now people drive much more sensibly due to the rules and regulations, and their knowledge of things that are bad.”

McCarthy stressed the financial toll of addressing the epidemic, saying the “only true long-lasting remedy to reduce this illicit and abuse of drugs is prevention,” and encouraging the teenagers to carry on in their efforts.

“We must do everything we can to educate and counsel the youth — your peers,” he said. “Students don’t come to kindergarten wanting to experiment with drugs. Those who move along this route as their educational lives continue may choose to gravitate toward peer groups that will for many reasons. This is where peer-positive pressure and education must rule the day.”

Rising Sun High School tackled tobacco in their PSA, crafting a commercial that features a sparse production of a teenager being handed cigarettes while a narrator comments that “it’s never just one.” The accompanying print campaigns emphasizes how teens would lose their limited amount of money, as well as suffering health issues, to tobacco.

North East High School looked at youth alcohol use, framing it as a choice between drinking and enjoying a quality life with family and friends. They are also partnering with school administrators to have their campaign displayed on TV screens in the school throughout the school day.

In their campaign, Bohemia Manor High School students addressed vaping, a trend that they said is growing amongst their peers, especially with the popularity of rather cheap and discreet devices like Juul. In their PSA, a track athlete is showed slowing behind competitors in a race, then a flashback shows that she vaped before the race.

Matthew Lynn, a Bo Manor High senior and youth leader on the DFCC, asked the audience of his student peers how many knew someone on their team or in their club who vaped. Nearly every teen raised their hands.

“That’s a problem and that’s what we wanted to highlight with our PSA,” he said. “Our youth care about the short-term effects.”

In conjunction with the TV and print ads, Bo Manor students are organizing a Twitter campaign to help counteract the prevalence of vaping-related social media postings among their peers, emphasizing its negative consequences while highlighting positive alternatives.

Cecil County School of Technology students took on marijuana, discussing the mental and physical effects of its use as well as the financial drain that use can create for teens. They noted that 22 percent of 12 to 17 year olds in CCPS admitted in the biennial Maryland Youth Risk Behavior Study to using marijuana, although that number is likely higher.

In their PSA, a high school graduate crossing the stage is faced with a decision: choose a joint with a single approving friend in the audience or a diploma with family and friends applauding. Viewers are encouraged to “choose the right path.”

The students of Perryville High School tackled over-the-counter (OTC) medications, or drugs that are legally prescribed or purchased but easily abused. Their PSA depicted a user whose drugs were as ubiquitous as their breakfast in the morning. The hope to engage their Perryville classmates by organizing a slogan contest regarding OTC use and hosting school assemblies to further discuss the topic.

Finally, Elkton High School addressed heroin — the biggest killer in terms of overdose deaths in the county right now — in a PSA that stressed the difficulty of overcoming addiction, but also the deadly consequence of not attempt recovery.

Keith Williams, the executive director of NorthBay who also serves as a volunteer firefighter in the county, said that he sees the those situations all the time. That knowledge of the real-life consequences was part of the reason why he was so impressed by the work of the younger generation.

“I’m grateful for you all being here, because you give me hope that you’re part of the solution,” he told the youth summit attendees. “The messages you came up with and the amazing innovative ways that you worked to deliver them ... I really think are going to save lives.”