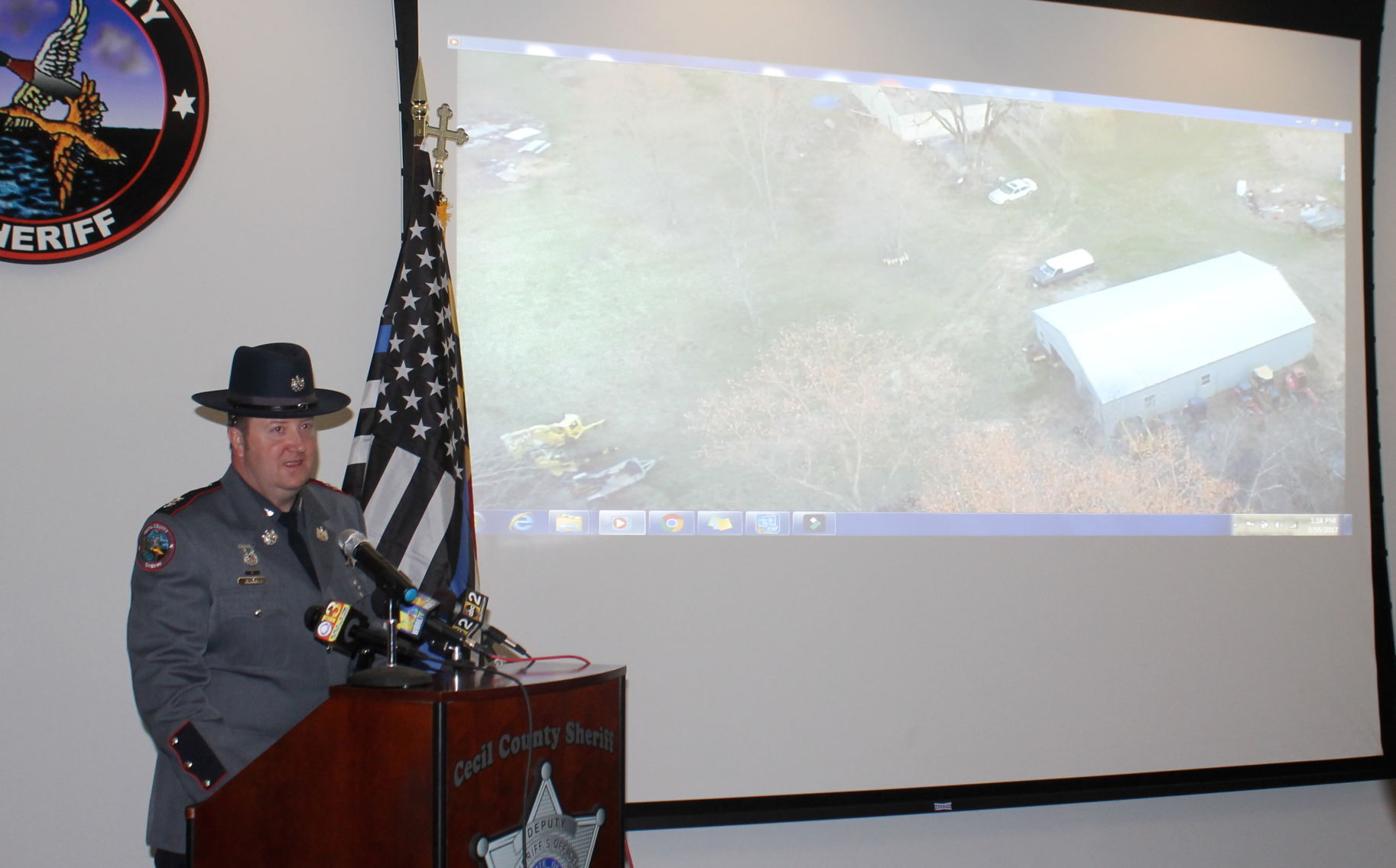 Sheriff Scott Adams stands at the podium while a video shows an aerial view of an Elkton-area property where investigators recovered nearly $400,000 in stolen construction equipment. Adams piloted the drone that took this video with its mounted camera. 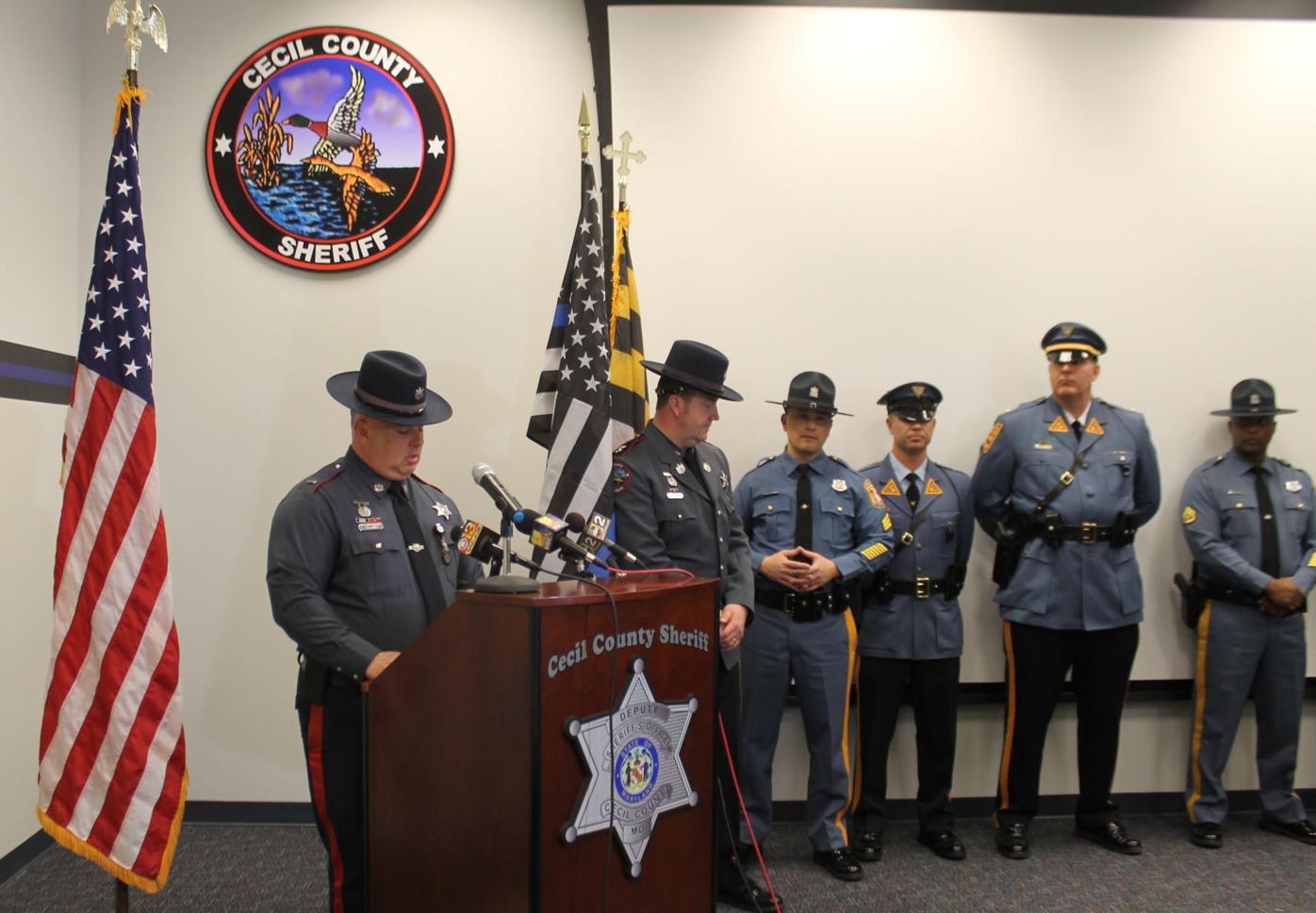 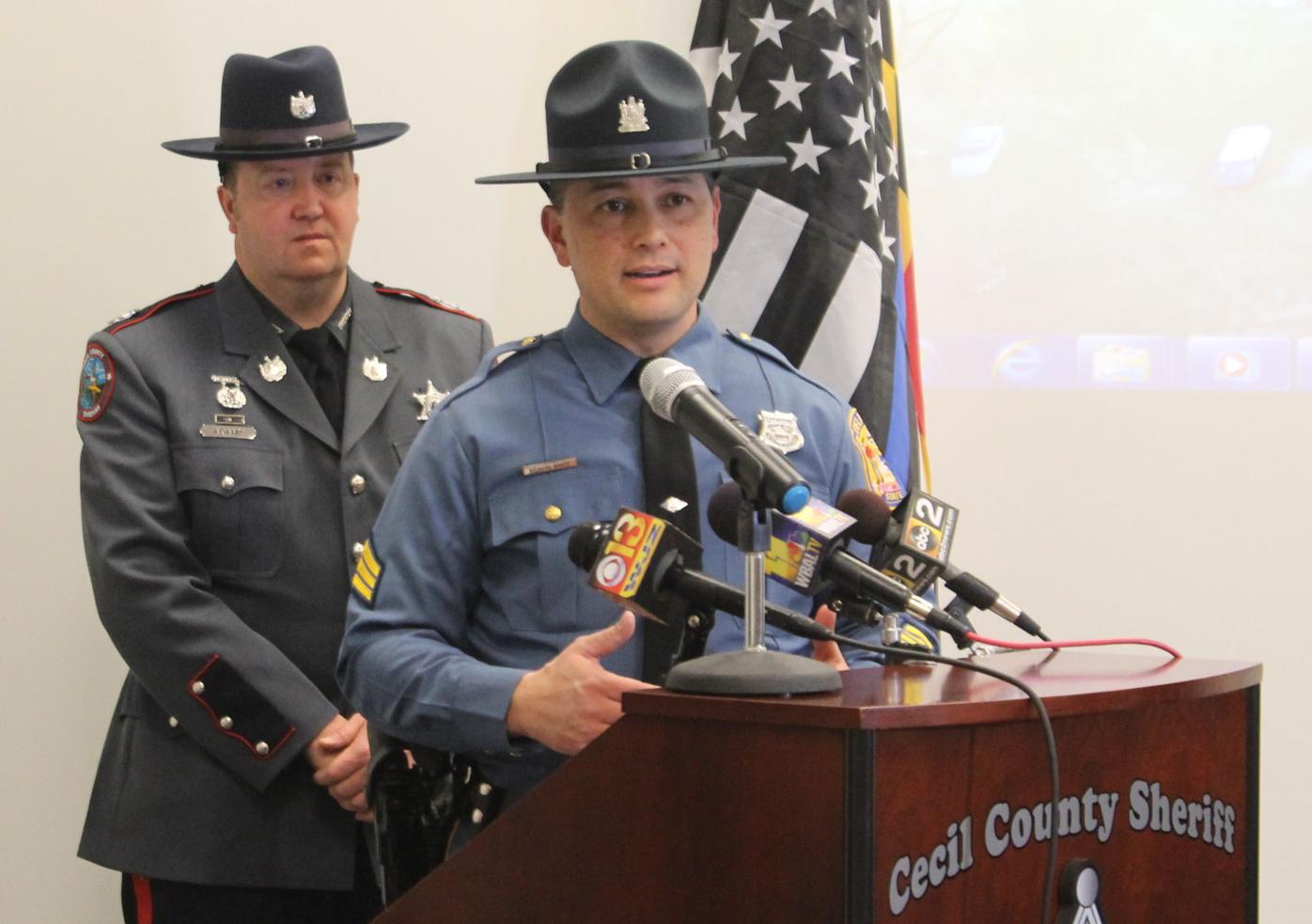 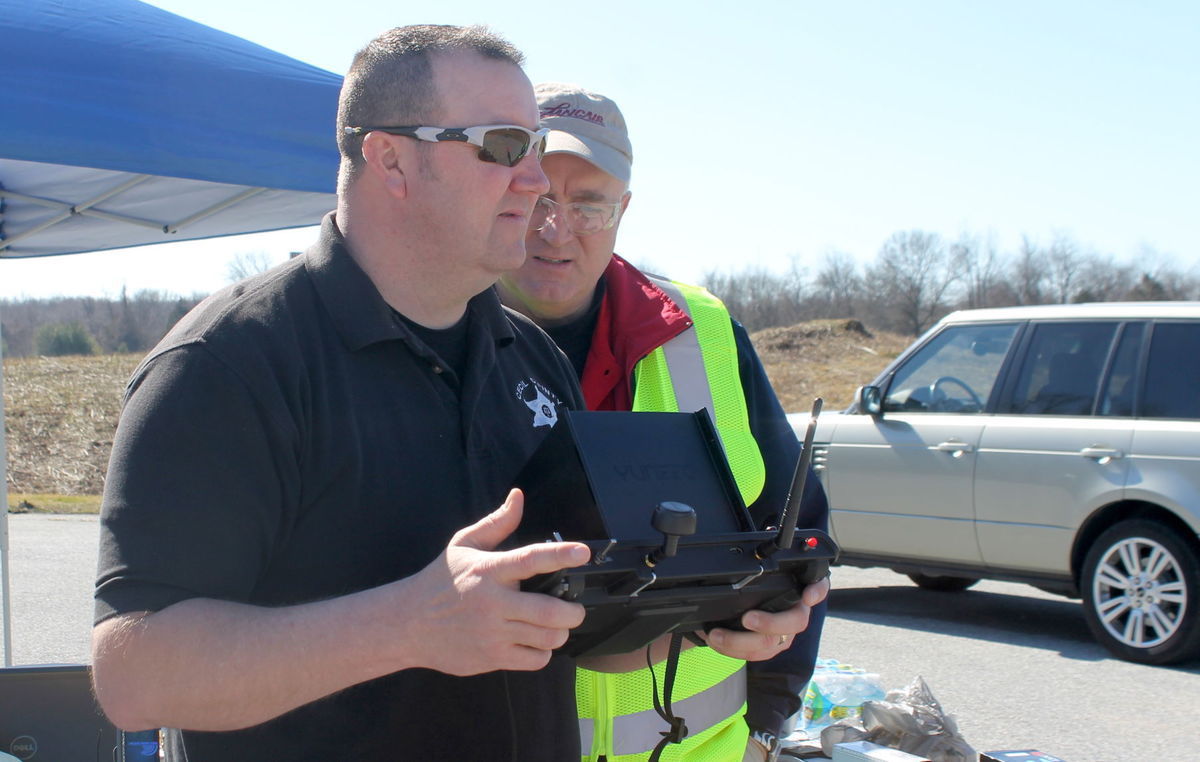 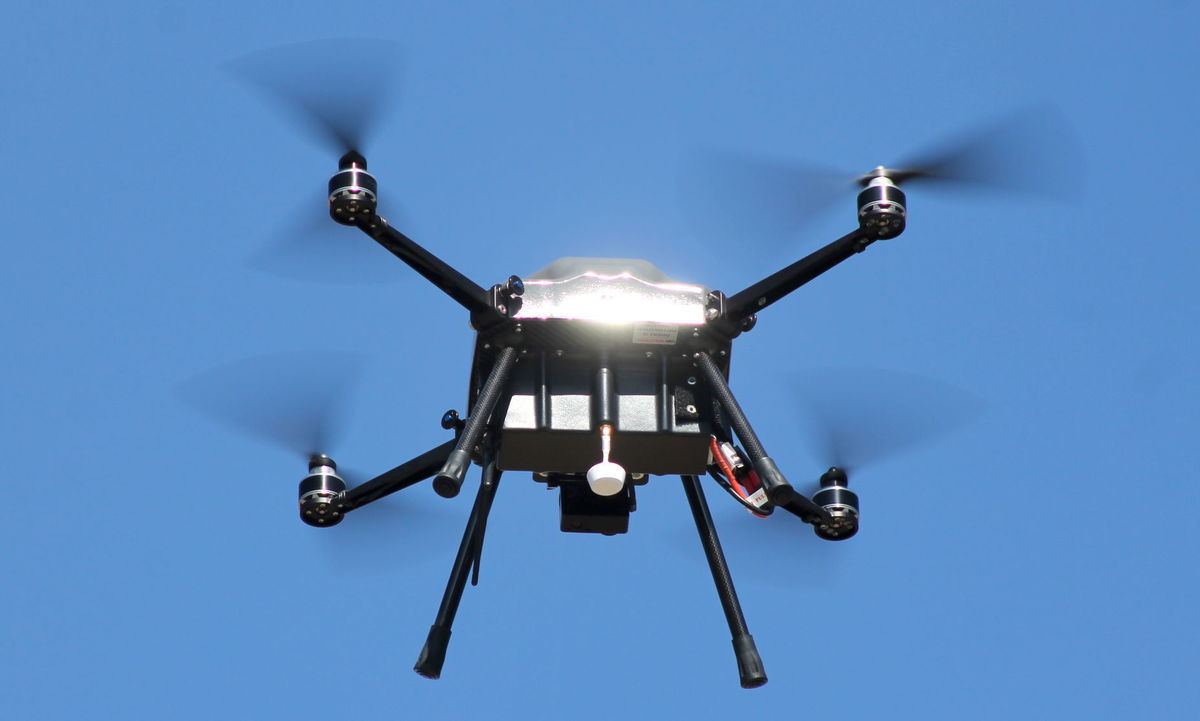 Sheriff Scott Adams stands at the podium while a video shows an aerial view of an Elkton-area property where investigators recovered nearly $400,000 in stolen construction equipment. Adams piloted the drone that took this video with its mounted camera.

Marking a major break in a joint investigation by CCSO and police in Delaware, New Jersey and Pennsylvania into a construction equipment theft ring, the drone surveillance led to the arrest of one suspect, an Elkton resident, whom investigators have declined to identify because of the ongoing probe, police said. More arrests are expected, police added.

“Outside of training operations, this is first time we put one up and we are pleased with the outcome,” Adams commented Thursday during a press conference at CCSO headquarters, where representatives of Delaware State Police, New Jersey State Police and other involved agencies were in attendance.

As it turns out, Adams is the one who piloted the drone above the periphery of the suspect property in the 2000 block of Barksdale Road, off Appleton Road, on March 9. Using the drone’s mounted camera, Adams videotaped 19 pieces of stolen construction equipment valued at approximately $394,000.

That equipment had been stolen from construction sites in Delaware, New Jersey and Pennsylvania over several months and includes excavators, augers, backhoes, trailers, stump grinders, chippers, bulldozers and at least one car hauler, police reported.

As of Thursday, 11 pieces of that stolen construction equipment — valued at an estimated $243,000 — had been returned to their rightful owners, according Lt. Michael Holmes, a CCSO spokesman.

“We still need to identify the owners of eight pieces of stolen equipment,” Holmes said, noting that that equipment is valued at about $151,000.

Holmes reported that the Barksdale property apparently served as a storage place for equipment stolen by people involved in the theft ring and that, as of Thursday, investigators had no official record of any equipment stolen in Cecil County.

“We do believe that some thefts occurred in Cecil County, but we haven’t been able to confirm that yet,” Holmes said. “The (recovered) construction equipment wasn’t stolen all at once. It was stolen a piece or two at a time over several months. Some of the stolen equipment was actually used on construction jobs. We believe that multiple suspects are involved in this and we do expect to make more arrests.”

As of Thursday, investigators hadn’t determined if the people involved in the theft ring planned to sell the stolen construction equipment or use it.

DSP Sgt. Richard Bratz said the Delaware thefts date back to October and occurred at construction sites off the U.S. Route 40 and Delaware Route 896 corridors, short distances from the Cecil County line.

CCSO detectives started their investigation on March 9 at the behest of the NJSP, which had developed an Elkton resident as a suspect in the thefts of several pieces of heavy-duty construction equipment in that state, police reported.

“Surveillance operations were conducted where the suspect was observed traveling between Maryland, Delaware and New Jersey. The suspect was identified several times frequenting a piece of property in the 2000 block Barksdale Road,” Holmes explained.

About that same time, CCSO investigators had received a tip concerning a man who allegedly had stolen several pieces of construction equipment from several states, Holmes noted.

CCSO investigators went to the Barksdale property, but, from the ground, they were unable to establish probable cause to search.

“It’s very large piece of property. From the road, we couldn’t see anything,” Holmes said.

So Adams piloted one of the agency’s drones above the perimeter of that property and made an aerial videotape, which later revealed the stolen construction equipment behind a large pole barn, police said.

That led to a court-approved search of that property, as well as one of the suspect’s Elkton residence, police added.

“At the suspect’s residence, investigators located multiple keys to the construction equipment that linked him to the stolen property,” Holmes said.

“It’s a new experience for me to see the use of drones in police work,” Tortella said, noting that his agency doesn’t have drones. “It definitely found a big piece of the puzzle and, in the grand scope of things, it saved us a lot of time.”

During the press conference, Adams explained that, without the drone, it would have required “more legwork and more time” to establish probable cause to search the Barksdale property.

He noted that, under a mutual aid agreement, CCSO could have requested either a Maryland State Police or a DSP helicopter crew to fly over that Barksdale Road property for surveillance.

However, according to CCSO Chief Deputy Gerald Widdoes, it would have been costly to do so.

“A helicopter costs $5,800 an hour. By the time a helicopter flew up from Martin (State Airport in Baltimore County) to here, did the aerial surveillance and flew back, it would have been over $6,000,” Widdoes commented.

CCSO spent $12,000 on one of its drones and $1,400 for the other. The agency plans to use the drones in a variety of situations, including assisting deputies with crowd control and documenting crime and accident scenes.

No one owns the sky as far as i know. And using a drone isnt illegal. What if a young boy flew his drone over the property and recorded that same thing put it on youtube and cops seen it that way or even someone in a small plane the Skies open Birds planes helicopters its all fair game!

I'm all for catching the bad guys. However, I cannot be a true defender of our Constitution if I'm reading this article correctly, and no warrant was obtained for this search. No probable cause could be seen from the road! Sure, we found some stolen equipment, But we did so illegally. Even if there is a law on the books allowing for the use of drones for a search for probable cause, this is a blatant violation of the Constitution and any Unconstitutional law is not enforceable. Every Constitutional Sheriff will know that. I don;t see how the owner of the property can be charged and those charges stick from that one statement, NO PROBABLE CAUSE COULD BE SEEN FROM THE ROAD..paraphrasing... I pray a warrant was obtained, if only to know my Sheriff in Cecil County in a Constitutional one.