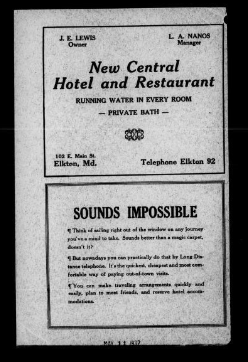 J.E. Lewis was the owner and L.A. Nanos was the manager of the New Central Hotel and Restaurant, which stood in the center of Elkton. 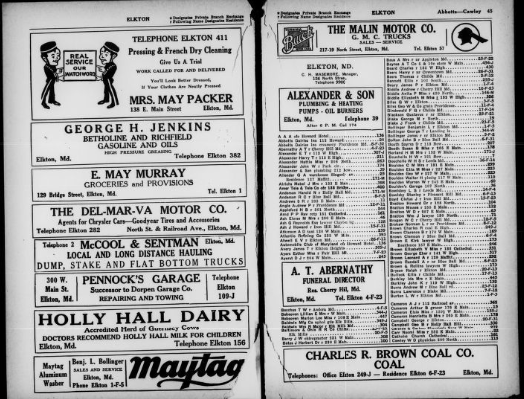 The phone book of 1932 contained advertisements of local businesses as well as listings for the phone numbers of residents. 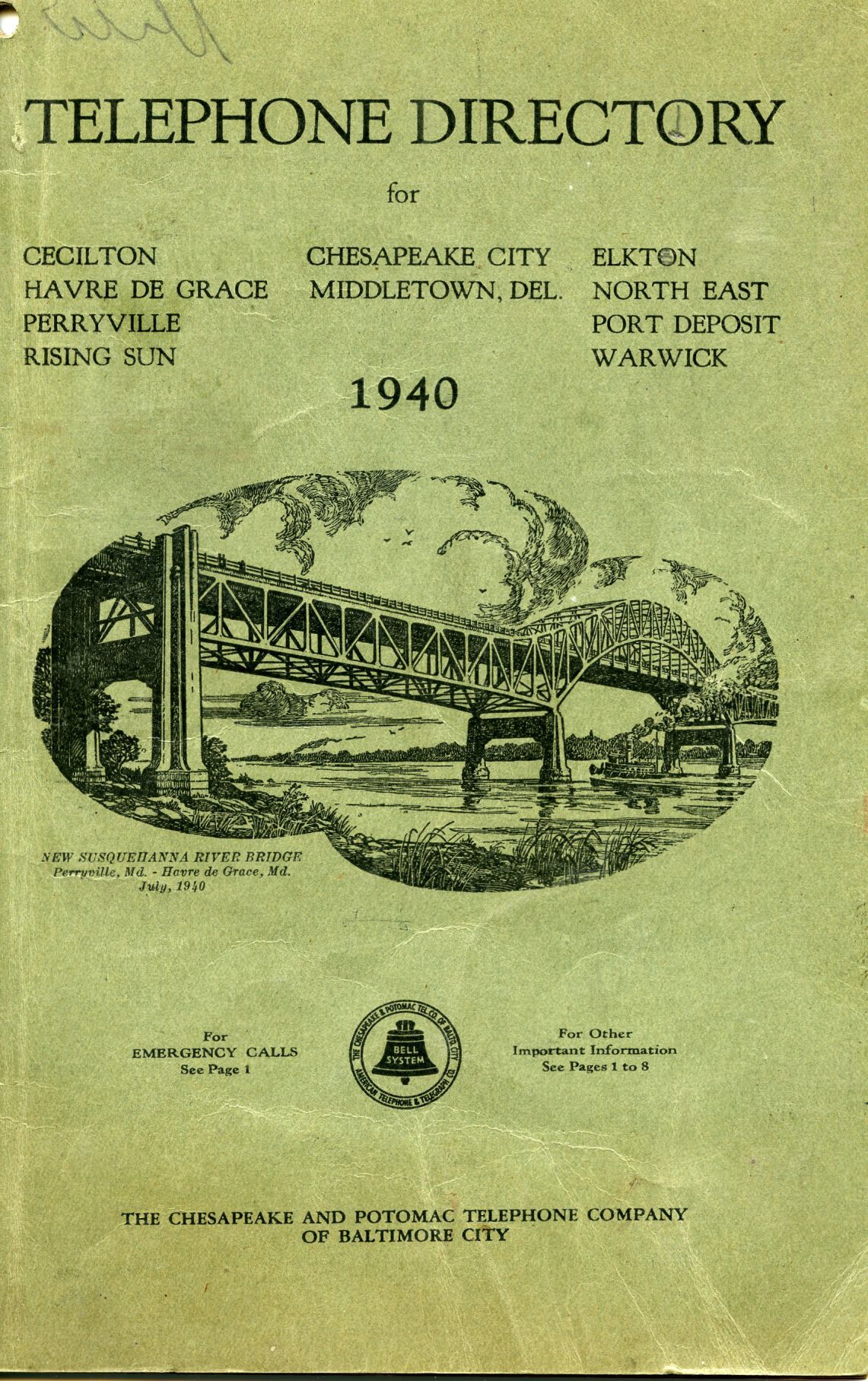 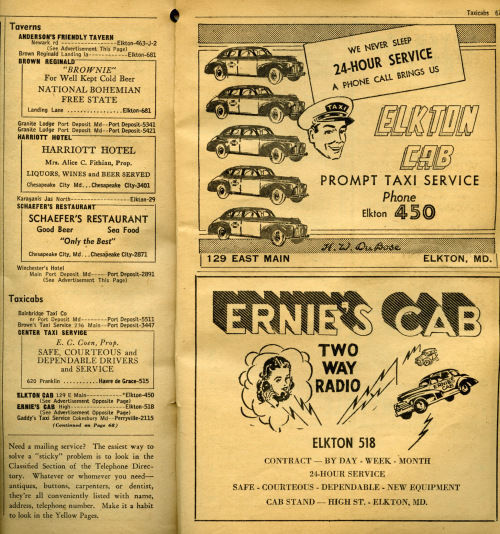 Local taverns and taxicabs companies were listed in the 1945 telephone directory.

J.E. Lewis was the owner and L.A. Nanos was the manager of the New Central Hotel and Restaurant, which stood in the center of Elkton.

The phone book of 1932 contained advertisements of local businesses as well as listings for the phone numbers of residents.

Local taverns and taxicabs companies were listed in the 1945 telephone directory.

In 1939, Elkton’s Ritz Hotel offered “the best food in the east,” and a shower in every room for a price starting at just $2. The J.J. Minster and Sons Jewelers offered “diamonds, watches, jewelry, clocks, glassware, and silverware” at 112 East Main Street, also in Elkton. Brought back any memories yet? How about dial telephones? Not many of those are around anymore. In the 1940s, they were just coming into vogue and not everyone knew how to use them. No worries. The 1942 phone book published a full page worth of instructions! “Listen for the dial tone,” and “do not attempt to dial until you hear the dial tone.” I guess folks were impatient 78 years ago too.

These are just a few of the discoveries to be made in the business and telephone directories held by the Historical Society of Cecil County.

Back in the day, these books were often times used for door stops and booster seats, but today can tell us, not only about who was who in the business world for any given year, but who lived where, for how long, and in some instances, their occupation. Did I mention a treasure trove for genealogists?

Another business related directory is the Mercantile Agency Reference Book from September, 1932 compiled by R.G. Dun and Company. There is a section on Cherry Hill, boasting a population of 400 souls, which were serviced by 2 grocers, 3 filling/service stations, and a blacksmith.

Colora, on the other hand, had a population of only 350, but had 2 flour mills, a saw mill, a coal dealer, and cannery. For the genealogists, this directory also lists the names of the business proprietors. So if you are curious about who sold burial vaults in Elkton, you can look it up and see that Dorie Foster did. Over in Charlestown, with a population of 177, you’ll see that Evan Moore operated the service station and lunch room. They don’t call them lunch rooms much anymore. Too bad. And if you’re documenting what the Foard Brothers sold in Chesapeake City, population 1,800, you’ll find they offered hardware, agriculture implements, auto supplies, and they operated a service station. Quite the entrepreneurs.

Amidst the drug stores, service stations, hardware stores, ice cream shops, clothing stores, and lunch rooms, there are some offerings that some of us in the 21st century no longer utilize and may not recognize. In addition to the Cherry Hill blacksmith, there are other establishments such as the one over in Port Deposit, population 1,200, where one Lawrence Paxon delivered ice as did H.W. Kibler in Chesapeake City. Clendenin and Brothers operated a flour mill in Colora. And Mrs. Lena L. Wilson operated a millinery in Elkton.

Finally, the Elkton City Directory from 1939 is useful for one other historical note. As Elkton was and remains the county seat, the directory lists the county’s government officials. Among them was W. Mason Shehan, who was the Chief Judge of the Circuit Court. David Randolph was county sheriff, and H.E. McBride was the school superintendent of Cecil County. There was even a district attendance officer position filled in 1939 by one Edwin Barnes.

So while these books are not ancient, at least not to this reporter, they do offer a myriad of information about those who lived, worked, and played in Cecil County early in the last century as well as back into the 19th.

The Historical Society of Cecil County remains closed until the end of 2020.