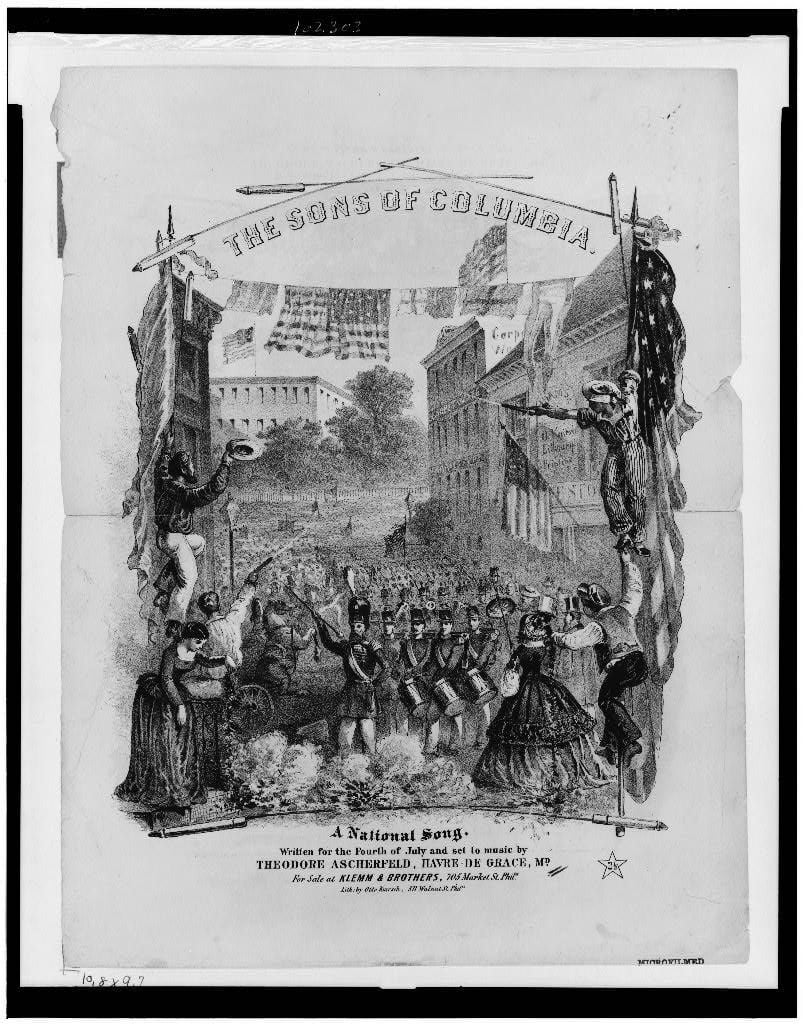 Cover to the Sons Of Columbia Sheet Music, Library of Congress. 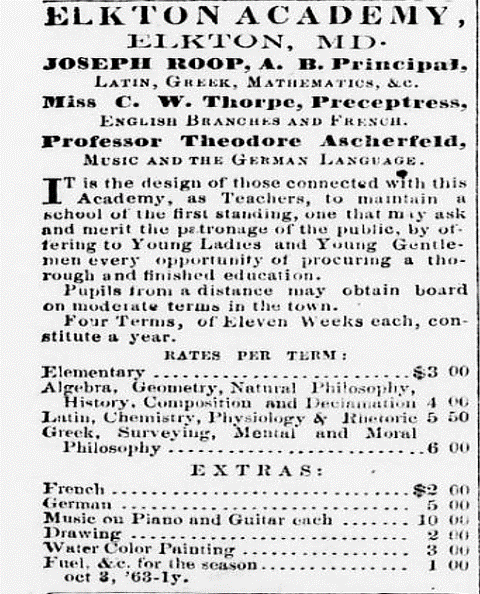 Ad for the Elkton Academy, the Cecil Whig c.1871

Cover to the Sons Of Columbia Sheet Music, Library of Congress.

Ad for the Elkton Academy, the Cecil Whig c.1871

Theodore Ascherfeld was a well-known fixture in Elkton during the 1870’s. Born in Essen Germany in 1820 he came to the US in 1848. He composed music such as “Elise schottische”, “Midnight reverie”, “Reception march” and “Krupp artillery march.” Theodore also taught music as a professor at the Elkton Academy. In contrast to his musical ability, Theodore was also successful as an inventor and holds several patents.

In the early 1870’s around Christmas the Cecil Whig wrote this about Theodore:

“The children would like one of Prof. Ascherfeld’s “Lightning Calculators” for a Christmas Present. It would prove highly useful as well as entertaining, and old St. Nicholas or Kriss Kringle ought to provide himself with a basket full of “calculators” when he makes his annual visit this year.”

“Professor Theodore Ascherfeld, of this town, has invented and constructed a very simple mechanism for the piano, by which an additional part can be performed without extra labor. Mr. A. will apply for a patent, and intends, meanwhile, using the invention in his public entertainments”.

In 1874 Theodore and his wife moved to Havre de Grace where Mr. Ascherfeld continue to compose and play music as well as invent until Theodore passed in 1905. The Baltimore Sun wrote in his obituary in 1905 that, “Besides a widow, Mrs. Elsie Ascherfeld, he leaves six children.”

It seems that Mrs. Ascherfeld was also a musician. Prior to their move to Havre de Grace, the Cecil Whig wrote about her farewell concert:

“Mrs. Ascherfeld, whose social virtues and proficiency as a music teacher, together with her long residence in Elkton, have gained her a large circle of friends, gave a farewell concert at the Odd Fellow’s Hall on Tuesday night last, which came off with much eclat and was highly successful, as an entertainment. A number of her pupils assisting, with Mr. Ascherfeld at the seraphine, and Mrs. A. at the piano. Mr. Charles Hurlock and Miss Emma Pistell, tenor and alto singers completed the troupe. The audience applauded to the echo, encoring many of the pieces. Mrs. Ascherfeld will leave Elkton for Havre de Grace with the regret of many warm friends.”