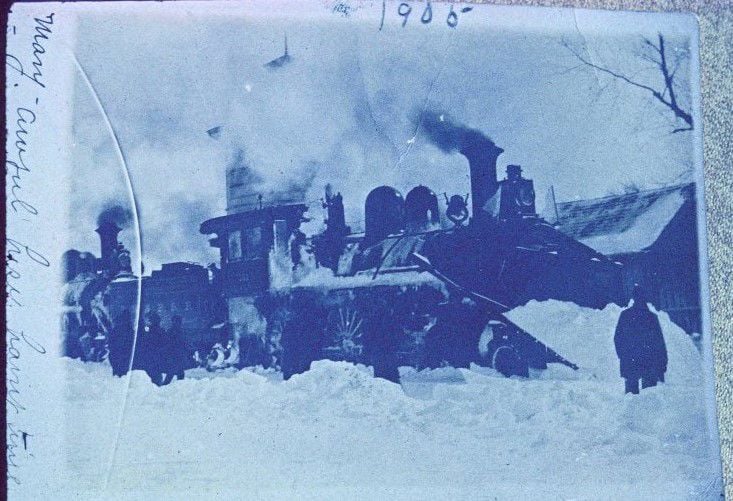 1905 photograph of a train and snow plow, from the Argus Robinson collection. 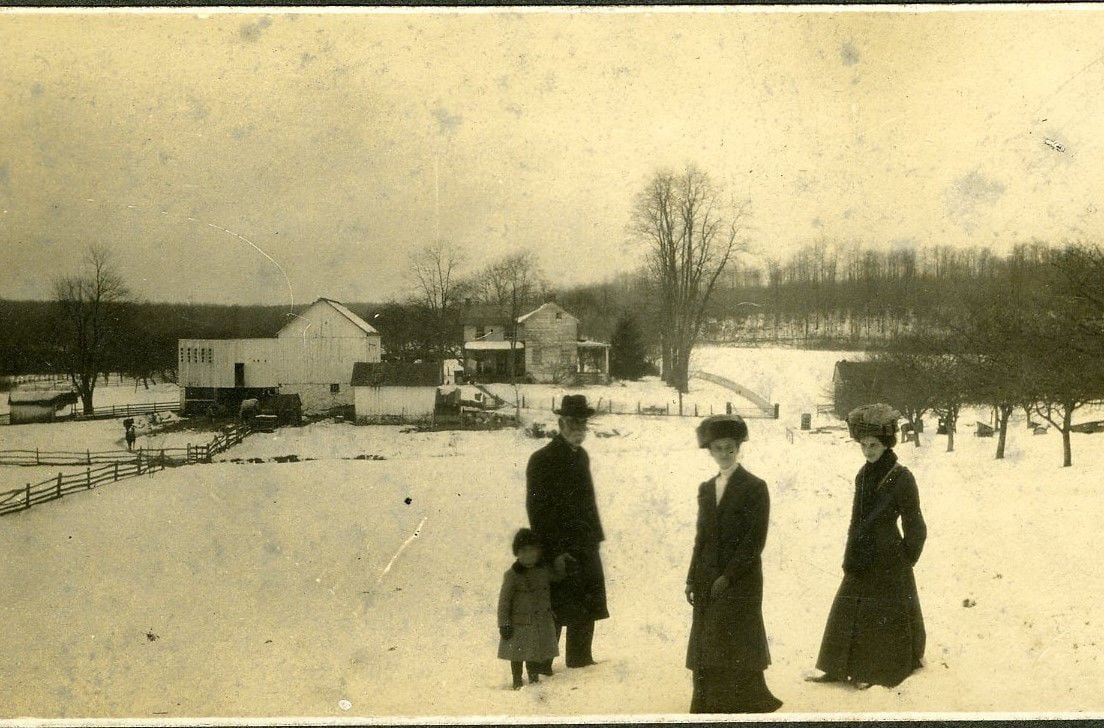 George Jackson and unidentified women on his farm at Blythedale. 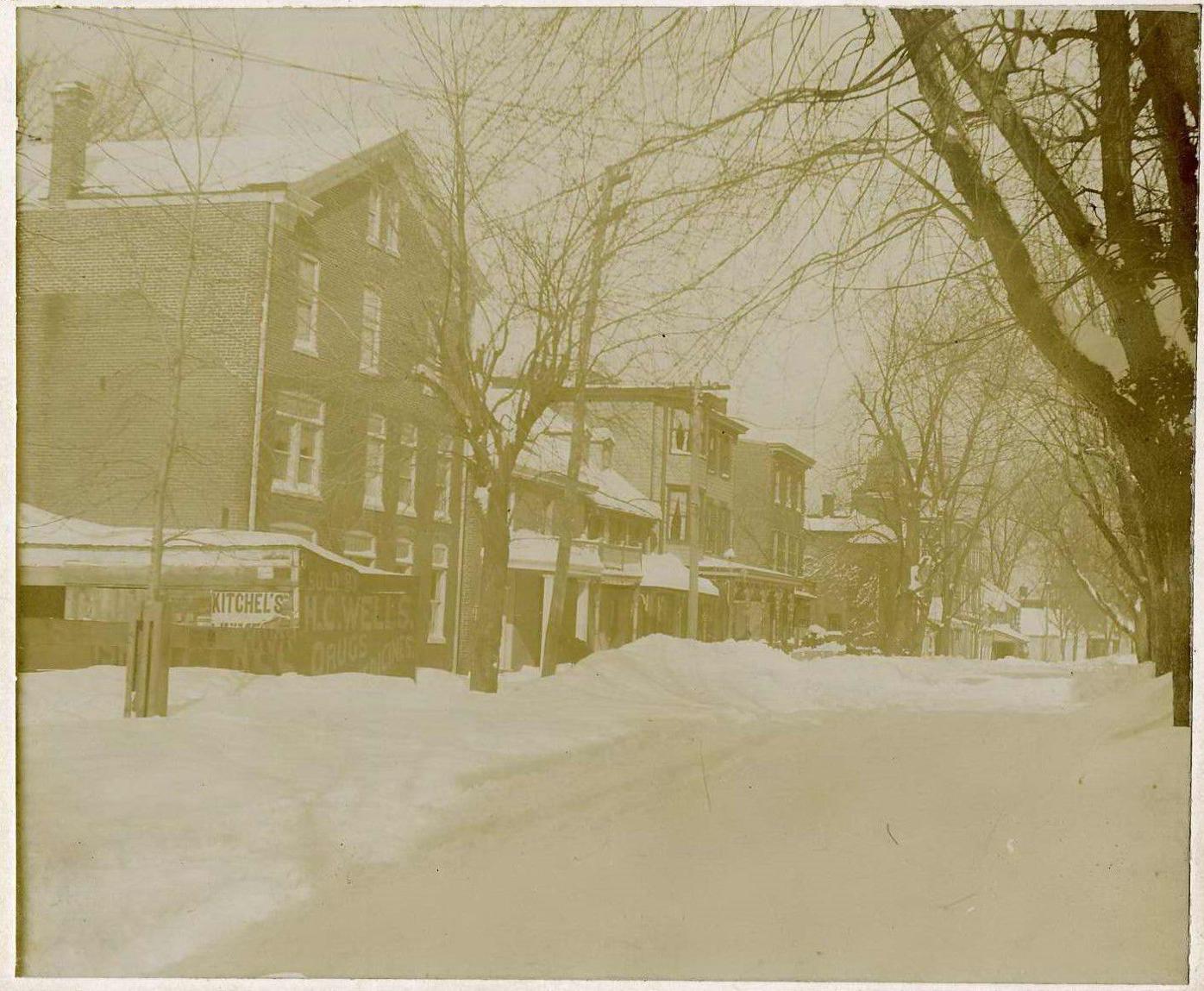 This photograph of North Street, of the correct time period but not definitively identified as 1905, gives an idea of what Elkton would have looked like after the blizzards of Jan./Feb. 1905.

1905 photograph of a train and snow plow, from the Argus Robinson collection.

George Jackson and unidentified women on his farm at Blythedale.

This photograph of North Street, of the correct time period but not definitively identified as 1905, gives an idea of what Elkton would have looked like after the blizzards of Jan./Feb. 1905.

“We had more snow when I was a kid.” Most of us have expressed that opinion at one time or another. I remember a blizzard in 1966, when what was shoveled out of our driveway created a six foot high wall down either side to the street. We have the technology to predict weather patterns more accurately today. A hundred years ago, however, these abilities were not so advanced. Weather scientists were not as able to warn the public about storms.

The holiday season was barely over when on Tuesday evening, January third, a blizzard blew into our region, creating havoc with railroad timetables and mail delivery. The total snowfall was not great, but the wind formed drifts which delayed trains by a few hours. Mail carriers on routes one and two in the Rising Sun area were unable to deliver on Wednesday, and carrier number 3, Samuel Terry, covered his route on foot, a total of twenty-three miles. Mail carriers on Thursday resorted to horseback delivery, and even then were not able to reach all patrons on their routes. This storm was merely a preview of what was to come.

On Tuesday, January 24, a fine, light snow began falling in the afternoon. This continued into Wednesday the 25th, accompanied by fierce winds which whipped the 12 to 14 inches of snow into huge drifts. All northbound trains were stopped in Colora, where the residents saw to the passengers’ needs. A number of passengers, including five Tome schoolboys, chose to stay on the snowbound train. Those people traveling by road in wagons, for instance farmers returning from markets in Wilmington, were forced to abandon their wagons and ride their horses home. W. Louis Ryan, a resident of Rising Sun, was caught in Oxford by the blizzard. Undaunted, he set out for home, a distance of eight miles, while the blizzard still raged, carrying a fifty pound kit of carpenter’s tools. He reached home after midnight with a badly frozen face. On Thursday, the temperature recorded in Rising Sun was zero degrees, in Port Deposit, minus four. The Midland Journal published an abbreviated edition of only four pages rather than the normal eight, as their paper supply was blocked by snow.

Snow plows and teams of men worked during the blizzard and after to liberate the blocked trains all over the region. By Thursday, only one train remained in Colora. As the days went by, more tales of the blizzard were brought to light. The Cecil Whig reported that mail carrier James Wharton was finally able to complete his route from Elkton to Chesapeake City on Friday, after three missed trips, the most he had missed in twenty years on the job. The paper also reported that “A case of ‘old rye’ consigned to a hotel in Oxford was disposed of by telephone at cost to a party presumably representing chilled passengers on a stalled northbound train on the Central road during the blizzard.” The Midland Journal reported that no marriage licenses were issued by Clerk of the Court Manly Drennen for the last week of January and the first week of February.

As efforts to get goods and services back on track continued into February, another blizzard struck on Monday February 13, adding six to eight inches to what still remained. Reports were yet coming in to the local papers of news of the blizzard of January 25th. The human toll of the storm was great. Several men perished during the storm as they tried to extricate stalled trains. Amos Burlin, a through fireman of the Pennsylvania Railroad on the New York-Washington line, spent several weeks recovering from severe exposure. Ellis C. Graham, a popular passenger conductor on the P. B. & W.Railroad, died from pneumonia on February 15 as a result of his efforts to help extricate his train from the effects of the blizzard.

Even into March, people were still coping with drifted snow from January 25th. Mail carrier E. T. Leedom was able to complete his entire route from North East to Zion for the first time in six weeks. It took another week for RFD route #1 carrier Chalmer C. Reynolds to cover his entire route for the first time. Work on the Cecil Farmers telephone line resumed in the third week of March, and Thomas B. Stewart of North East was caring for a flock of partridges he caught during the blizzard, with plans to release them back into the wild come spring.

So consider yourselves fortunate that you are only inconvenienced for mere days when the next blizzard strikes, rather than for two months as your ancestors suffered during the wild winter of 1905.