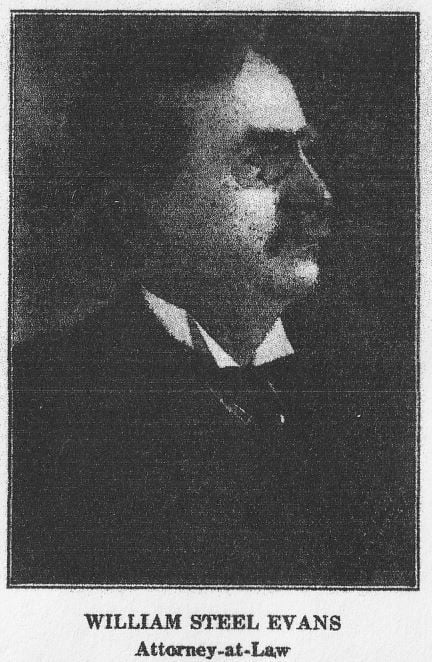 This photo of William Steel Evans was included in the Cecil Whig Historical and Industrial edition of 1919, published in July shortly before Evans died.

A portion of the 1907 Elkton Sanborn map showing the probable residence of William Evans, nos. 228 & 229 North St., a home with an office. 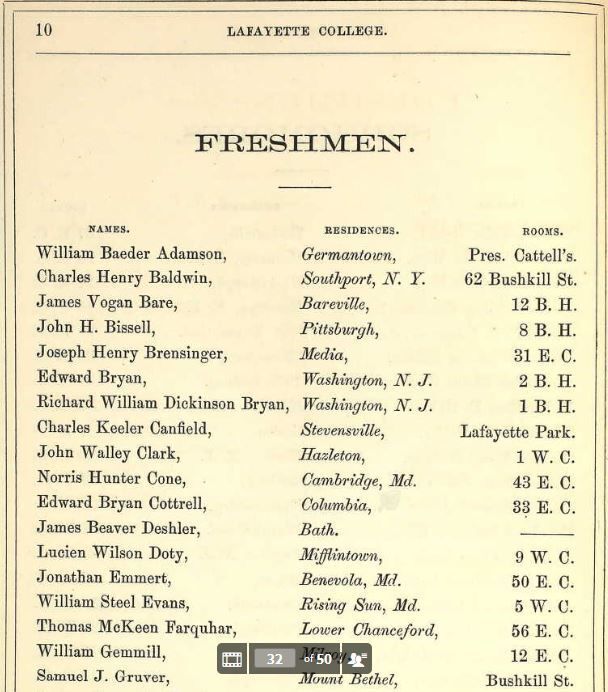 This page from the Lafayette College catalog of 1867 lists William Steel Evans as a freshman. 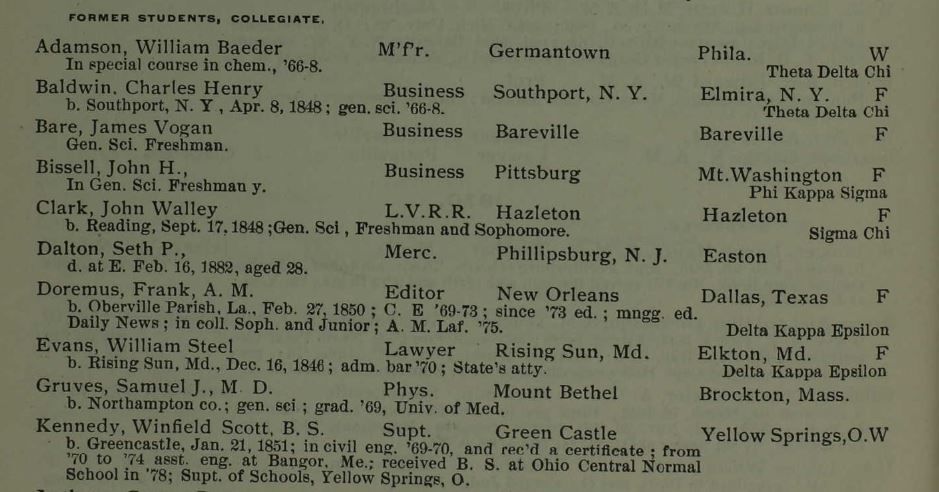 This photo of William Steel Evans was included in the Cecil Whig Historical and Industrial edition of 1919, published in July shortly before Evans died.

A portion of the 1907 Elkton Sanborn map showing the probable residence of William Evans, nos. 228 & 229 North St., a home with an office.

This page from the Lafayette College catalog of 1867 lists William Steel Evans as a freshman.

William Steel Evans was born December 16, 1846, in Rising Sun to parents John Patterson Evans and Rebecca Steel Evans. He was educated at West Nottingham Academy, Newark Academy and Lafayette College in Easton, Pennsylvania. Evans was admitted to the bar on May 28, 1870 and began his practice shortly thereafter in Elkton. He married Jane “Jennie” Frazer on April 24, 1872 and went on to father ten children.

Evans was a civic-minded individual and became a well-regarded figure in Elkton and eventually served on committees and in organizations benefiting the community. Not only did he serve as State’s Attorney for twelve years, he was president of the Mutual Fire Insurance Company of Cecil County, one of the State Managers of the Springfield State Hospital for the Insane, a trustee of the Jacob Tome Institute, Vice President and Director of the National Bank of Chesapeake City, a Director of the Elkton Banking and Trust Company of Maryland, Attorney of the National Bank of Rising Sun and other banks, President of the Home Light & Power Company, and a Trustee of the Elkton Cemetery. A look at some of his later papers gives insight into not only his practice but to those people he served.

There is a wide mix of documents in this collection. Along with folders of less than exciting receipts, invoices and the like, and letters having to do with family and neighbor squabbles, there are estate and guardianship papers of the Keilholtz family, wherein John H. Keilholtz became the executor and guardian of his eldest son’s estate and two underage children. Having sat on the Board of Trustees of the Jacob Tome Institute as their legal representative, one finds documents pertaining to the Institute’s money lending sideline. The school frequently provided loans to individuals for various reasons, though none of the mortgage documents in the collection have anything to do with loans for the school’s tuition.

One of the bigger cases Evans took on was that of four young entertainers from Elkton, part of a larger group, who were roughed up and arrested by railroad policemen at the Havre de Grace railroad station. These young men were waiting for the train to take them back to Elkton after a performance. Other Cecil County residents witnessed what happened as one of the young men was apparently beaten for lighting a cigarette in the station, where no smoking was allowed. The men were taken to jail and eventually went before a judge and paid fines. They engaged Evans to represent them in their lawsuit against the Philadelphia, Baltimore & Washington Railroad. The case went on for quite some time, from 1907 to 1910. Two of the men settled, but one Henry Green pursued his case through a change of venue and all the way to the Maryland State Court of Appeals.

One case that must have been particularly sad for Evans was that of his brother-in law. A fellow attorney from Allentown, New Jersey, he arrived in Cecil County and embraced his adopted home. In 1882 he married a sister to William’s wife, but in 1894 she and their newborn son. died. Their older son, Charles, became a teacher. In the early 1910s, William’s brother-in-law began exhibiting signs of mental illness. By 1912 he was unable to work and in February 1912 was signed into Laurel Sanitarium suffering from depression and paranoid delusions. William Evans handled all his brother-in-law’s business affairs and was the one who communicated with his doctors at the sanitarium. After some months, the doctors saw improvement, enough that they felt that the gentleman could leave the institution as long as he was under the care of someone. That someone was his unmarried sister. She still lived in or near their home town and that is where he went.

There are many letters from the sister to Evans, reporting on her brother’s progress, or lack thereof. He arrived at his sister’s in July and at first things went pretty well. However, over the ensuing months he gradually deteriorated and by the fall of 1912, the sister’s letters become very frequent and increasingly desperate as she began to consider institutionalizing him once more. How hard it must have been for her, remembering him as he once was, struggling with the decision to sign him into a place she knew he hated. Unfortunately, in January of 1913, her brother was admitted to the State Hospital in Trenton, New Jersey, where he died two years later. He is buried next to his wife and son in Elkton Cemetery.

What a sad burden this must have been for William Evans, especially as his own health was not good. In 1919, he was suddenly stricken at home with “stomach trouble” and died there a few hours later. He too is buried in Elkton Cemetery along with his wife, his parents, and most of his children. The loss to Cecil County of such a fine citizen was no doubt deeply felt.