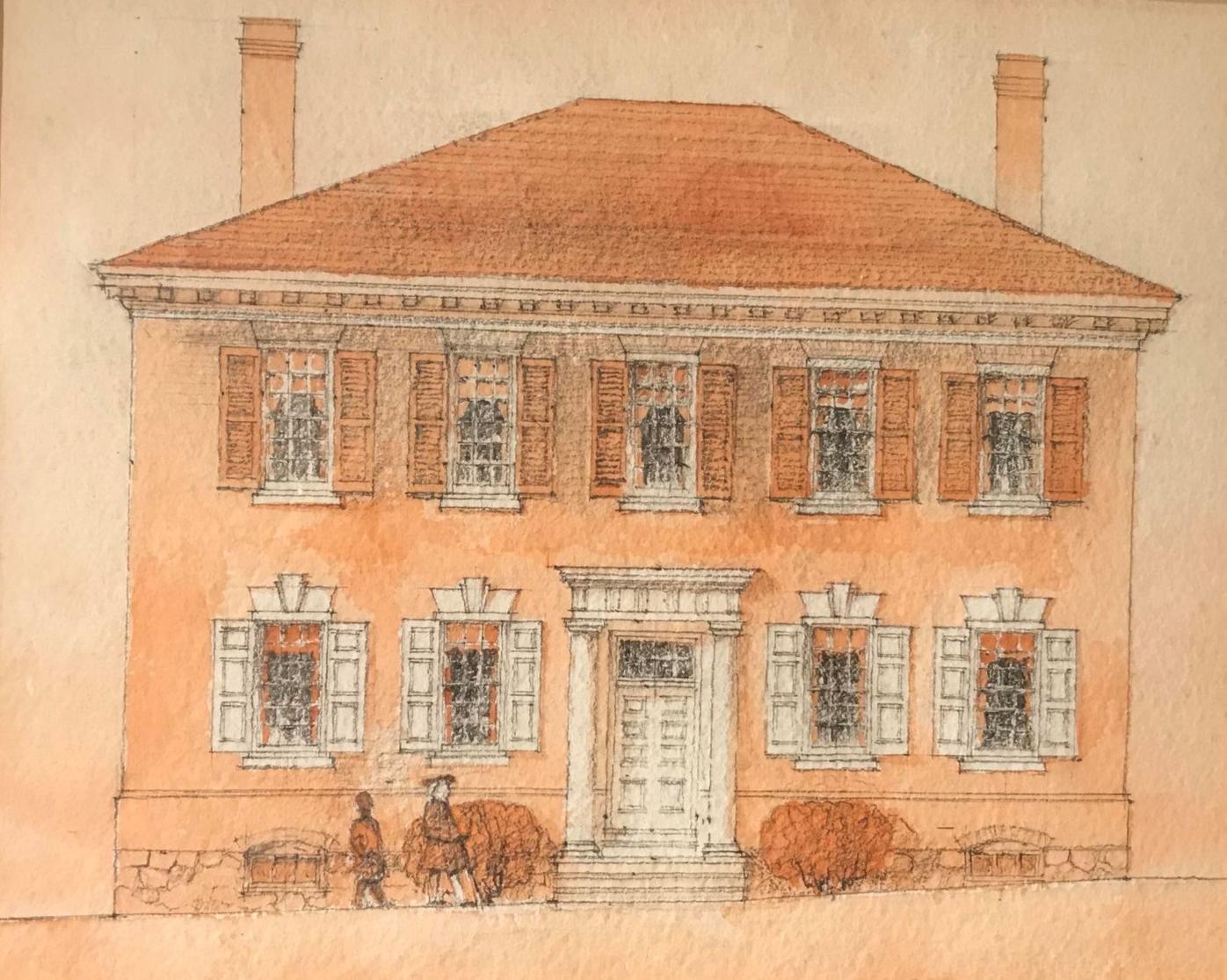 Ralph Jeffers sketched the Rudulph Mansion before its demolition. 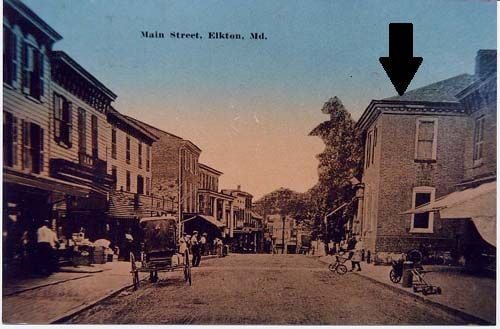 This photo, taken some time before automobiles traveled Main Street, shows how far out of line the Rudulph House is from the other Main Street buildings. 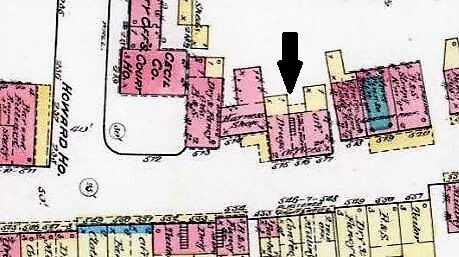 In this pre-1930 map, it is obvious that the Rudulph Mansion is not in line with the other Main Street buildings. 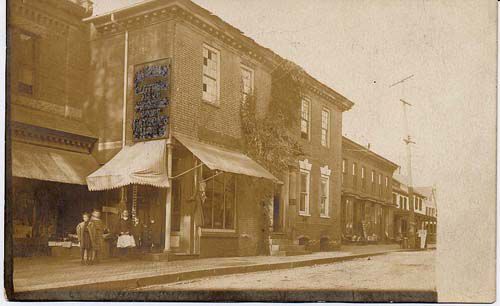 In the 1890s, the Baltimore Bargain House occupied the west side of the building. 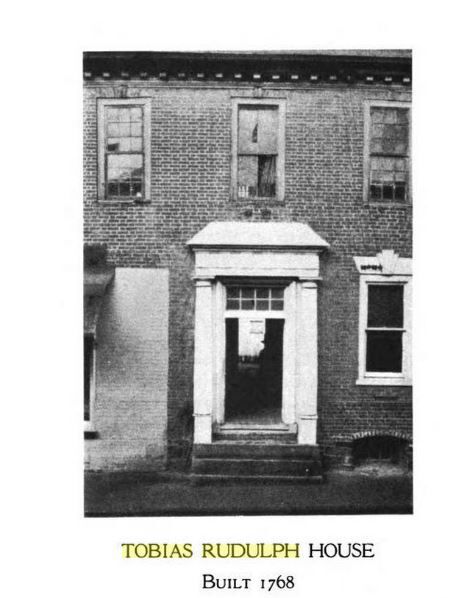 The elaborate doorway of the Rudulph house is shown in this photo. 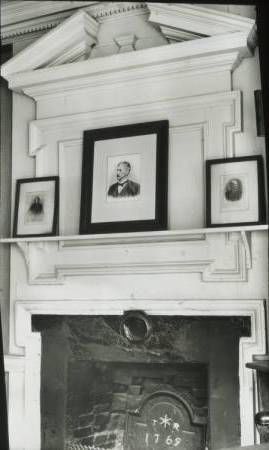 This fireplace, from the parlor of the Rudulph House, was one of the details sold and rebuilt in an Easton, MD mansion. It is unknown who is portrayed in the pictures on the mantel. 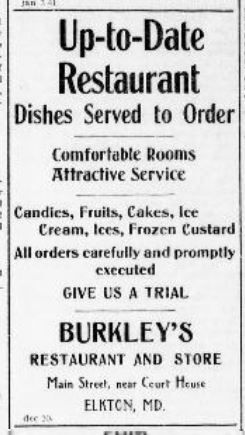 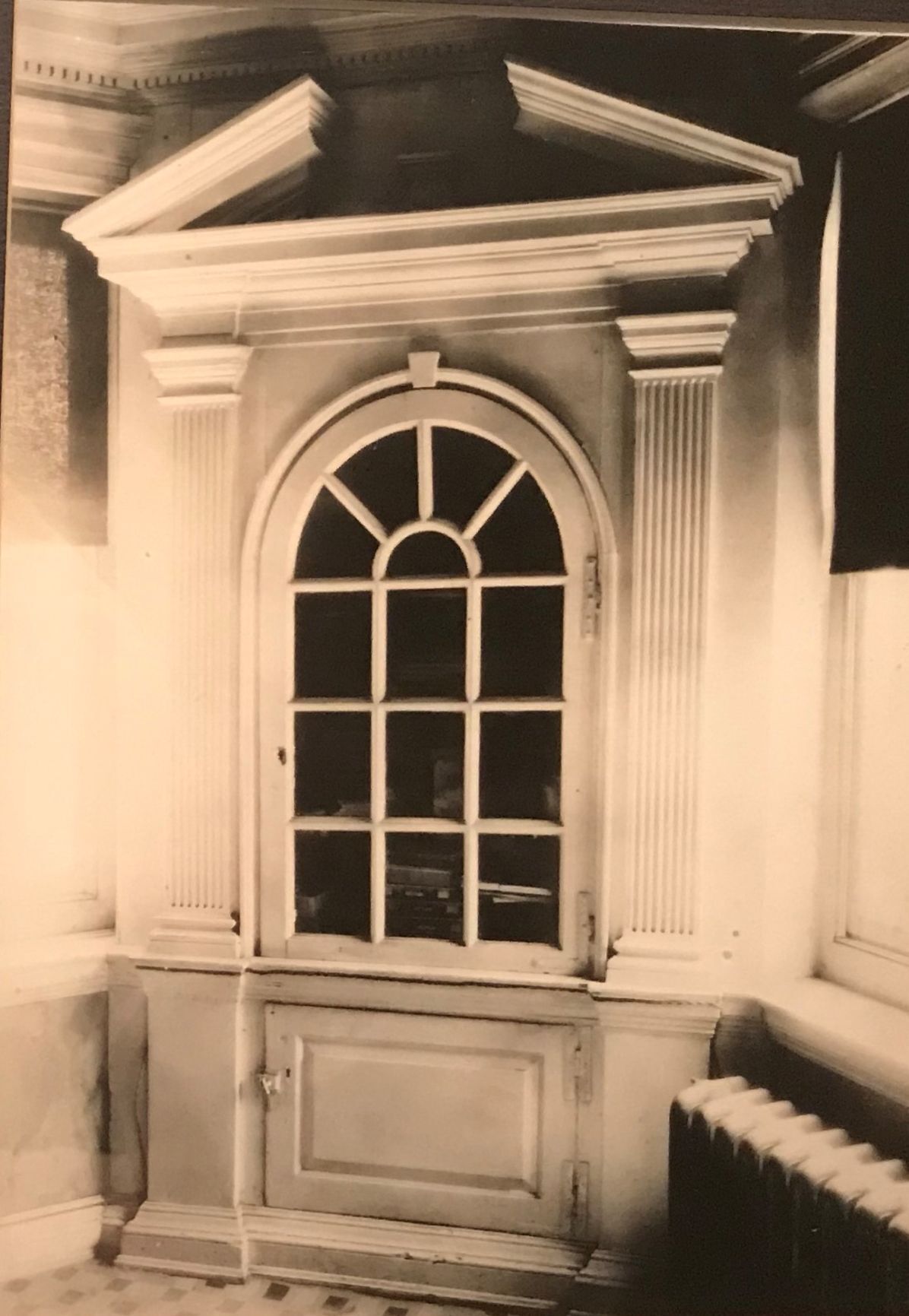 The elaborately detailed corner cupboards were throughout the Rudulph Mansion.

Ralph Jeffers sketched the Rudulph Mansion before its demolition.

This photo, taken some time before automobiles traveled Main Street, shows how far out of line the Rudulph House is from the other Main Street buildings.

In this pre-1930 map, it is obvious that the Rudulph Mansion is not in line with the other Main Street buildings.

In the 1890s, the Baltimore Bargain House occupied the west side of the building.

The elaborate doorway of the Rudulph house is shown in this photo.

This fireplace, from the parlor of the Rudulph House, was one of the details sold and rebuilt in an Easton, MD mansion. It is unknown who is portrayed in the pictures on the mantel.

The elaborately detailed corner cupboards were throughout the Rudulph Mansion.

Note: This article originally appeared in the Cecil Whig on May 19, 2018.

Tobias Rudulph, born in 1719, was a distinguished founder of Elkton, formerly known as Head of Elk. He was one of four brothers born to parents who immigrated to Cecil County from Prussia (Austria) in the early 1700s. While his brothers chose to engage in farming, Tobias chose to work in the mercantile business. In 1745, Rudulph leased a few acres of land near Elk Landing and later moved his business to Head of Elk. Rudulph served as a magistrate in the mid-1700s and was a staunch supporter of the Continental troops in the Revolutionary War.

Although he was too old to serve as a soldier, Tobias Rudulph signed the Non-Importation Resolution of 1765. This resolution was signed by merchants who pledged not to import goods from England. Rudulph also served on the Committee of Safety and was a dispatch carrier.

In 1768, he built a brick house, two doors east of the courthouse, near the intersection of today’s Main Street and North Street. The bricks used in the construction of this house were reportedly from England. The foundation of the Tobias Rudulph home was built of stone, perhaps found when the lot was cleared for construction. Few houses stood in Head of Elk when this home was constructed. It was built on the edge of the Old Post Road between Baltimore and Philadelphia. According to a 1955 Cecil Whig article, written by Ethyl Howard Rowe, the house faced a marsh that was owned by Henry Hollingsworth. Today, that marsh is the location of the businesses on the south side of East Main Street.

The Cecil County News published an article in the October 25, 1935 issue written by Catherine Eckels Wilson. In that article, the author describes the home as being one of the finest homes built at Head of Elk. The home was famous for its beautiful columned doorway and the fan-shaped rose windows above the door of oak. The heavy oak doors were paneled in an antique cross design and had wrought iron hinges and latches. The store of Tobias Rudulph was on the first floor of the house, as was the custom of the day.

According to the article by Mrs. Wilson, the interior of the home was just as impressive. The rooms were “beautifully apportioned and had large corner fireplaces with high, narrow-shelved, wood-paneled mantels which flushed close to the ceilings with a quaint pointed Doric trim. There were chair rails and carved molding and fretwork.” According to Ethyl Howard Rowe’s 1955 article, on the parlor fireplace there was a cast-iron plate bearing the inscription “T.R. 1769”.

The house had several stories and traditions associated with it. One of the stories is linked to none other than General George Washington. Because of the house’s location on the Old Post Road, and Tobias Rudulph’s position as a dispatch carrier, it is likely that the Rudulphs hosted General Washington on some of his travels through Head of Elk. No hard evidence exists that Washington actually visited the family, but it is certain that he knew Tobias Rudulph. In a letter from George Washington to Brigadier General William Smallwood dated May 17, 1778, Washington instructs Smallwood to send an officer to “Mr. Hollingsworth, Mr. Rudulph, and others in the Quartermaster and Commissary Departments” to find out how many Continental troops were in the area of Head of Elk.

Another tale takes place during the Revolutionary War when the British landed at Elk Landing and marched through town on their way to the Battle of the Brandywine. Tobias Rudulph had a wine cellar built under the west side of the house with outside doors leading down to it. General Washington and the Continental soldiers were stationed at Red Hill in anticipation of the British army. Several Continental soldiers found the wine cellar and were filling their canteens from the pipes of wine in the cellar, when they saw the British turning onto Gay Street (now Main Street) on their way from the river. The Continental soldiers hurried to Red Hill with their wine.

Throughout the years, the Rudulph Mansion was used for many purposes. In 1869, the west side of the building was where Dr. James Frazer opened the Elkton Drug Store. The post office was located in the drugstore until John Partridge was appointed postmaster and moved it across the hall. In the 1890s, the Baltimore Bargain House was located in the building. According to F. Rodney Frazer’s book Parts of Elkton in 1918 As I Remember It, Mrs. Ida V. Burkley and her daughter Edith had a cake, candy, and ice cream store in the west side of the building. Advertisements for Burkley’s Restaurant and Store from the Cecil Whig in 1914 and 1915 boast that their candies, fruits, cakes, ice cream, ices, and frozen custards are “carefully and promptly executed.” In that same year, Albert Constable had a law office in the east side. In 1926, John K. Burkley purchased the building for his mother, Mrs. Ida V. Burkley.

According to a Cecil Democrat article dated March 22, 1930, the Rudulph building projected about eight feet out beyond the line of the other structures built in the center of town. The house had existed long before the town. The town was incorporated in 1787, while the house was built in 1768. All of the neighboring buildings on Main Street grew up around the house. The swamp across the road had become stores and offices. The dirt road in front of the home, where horses and buggies had journeyed for 162 years, had become a paved road where automobiles traveled.

At that time, Main Street was U.S. Route 40. With the increased number of automobiles traveling through town, this created traffic problems between Church and North Streets. The March 20, 1930 Cecil County Star reported that Mayor Taylor McKenney and the Elkton Town Council worked for two years to negotiate the purchase of the front part of the building so that it could be razed. This would allow the straightening and widening of Main Street and eliminate the curve in the road. According to the March 28, 1930 issue of the Midland Journal, the purchase price was $8,700.

Mrs. Burkley planned to raze the building and then build a new one in line with the other Main Street buildings. The new building would be two stories tall. Offices and apartments would be on the second floor and the first floor would be occupied by the American Store.

Before the historic building was razed, Mrs. Burkley must have realized how important the architectural details of the house were. According to a plaque hanging in the stairway of the present building, all the brick, mantles, and doorway trim were sold to a Texas millionaire who rebuilt it in a mansion known as Foard’s Landing in Easton, MD.

Many thanks to Wendy Burkley Barry, the building’s owner, and Charles Scott Jr. of Scott and Scott Attorneys for their assistance in writing this article.

The Historical Society of Cecil County remains closed to the public. We hope to see you all in 2021.