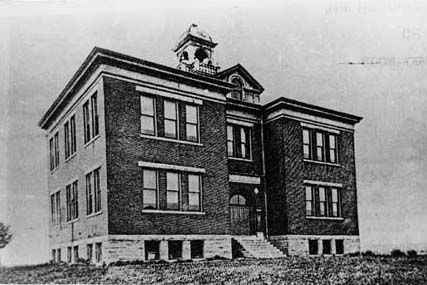 Cecil County High School was built in 1896 on Maffitt Street in Elkton. 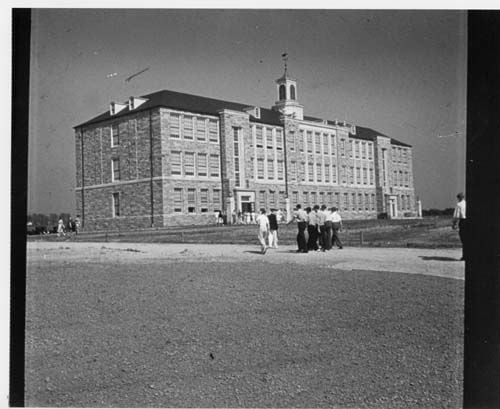 The second building for Elkton High was built on North Street. 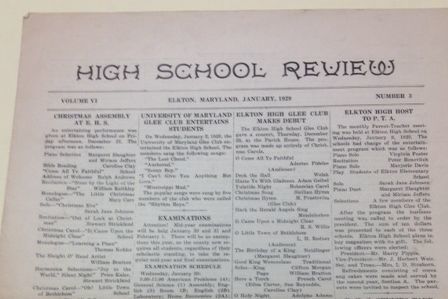 The front page of the High School Review, the second newspaper of Elkton High School. 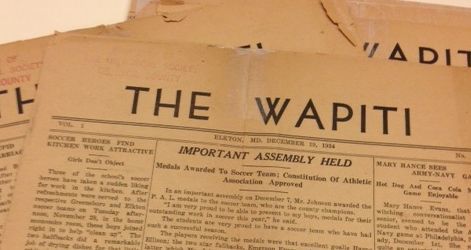 The third newspaper of Elkton High School was The Wapiti.

The banner for the October 1942 Elihisco.

Cecil County High School was built in 1896 on Maffitt Street in Elkton.

The second building for Elkton High was built on North Street.

The front page of the High School Review, the second newspaper of Elkton High School.

The third newspaper of Elkton High School was The Wapiti.

The banner for the October 1942 Elihisco.

When Elkton High School was renovated several years ago, a collection of old school newspapers was donated to the Historical Society of Cecil County. A series of articles was written that detailed the content of these newspapers. In this week’s story, the articles have been condensed into one article.

In 1896, Cecil County High School opened its doors on Mackall Street in Elkton. The school’s first newspaper was named The Comet and was published in a booklet form. The historical society has an incomplete collection of this school newspaper. Volume I, Issue I, was published in 1909 as the school newspaper of Cecil County High School. Each issue began with a couple of fictional stories written by students. Next came a few pages of school news and announcements. In the next section of the paper, a member of each class reported on events and gossip from their classmates.

The athletics section came next. Sports scores and rosters were shared in this part of the paper. The final part of The Comet was the advertisement section. Elkton businesses such as Shapiro & Singman Clothiers, C.E. Finck Jewelers, Elkton Hardware Store, Davis & Vinsinger, Harland and Mitchell Livery, Elkton Candy Kitchen, Vinsinger & Pippin, and the Elkton Opera House advertised.

The second school newspaper of Cecil County/Elkton High School was called the High School Review. The first issue appeared in January of 1923. The editor, Dean Leffler, wrote that the object of the paper was “to fill a gap that exists between the faculty, students, and patrons” of the school. The big topics of the first issue are the girls’ basketball team, the boys’ football team, the senior play, and the examination schedule. News from each class was reported, and jokes, riddles, and poems were also included.

After the construction of Elkton High School on North Street, the name of the school’s newspaper changed to The Wapiti. The word wapiti means elk and is from the Shawnee and Cree word wapiti. The historical society only has 3 copies of this paper, all from 1934. The Wapiti did not last long. In the next decade, the Elhisco was born.

The first issue of the Elhisco was published in December 1940. A school-wide contest was held to name the new school newspaper. Francis Strahorn and Ashton Brown combined Elkton, High, and School to create the name Elhisco. They received a free subscription to the newspaper for their efforts. The purpose of the Elhisco, as stated on the front page of the newspaper, was to record the “important events of the year… a record of a year of liberal education”.

Volume 1 Issue 1 of the Elhisco contained short reports about community and school organizations such as the Girl Scouts, Collins Dance School, and school sports teams. One article on the front page noted that the girls’ basketball team was the largest team yet. Members of the girls’ team included Betty Hudson, Betty Steele, Elaine George, Pauline McIntire, and Bunny Williams.

Dances were held at Elkton High in October and November. The October dance was sponsored by the senior class and cost 25 cents “stag or drag”. Ruth Bower was elected president of the student council and representatives were chosen from homerooms. Mary Alagia was elected vice-president, Carl Feucht was elected secretary, and Betty Kerr was elected treasurer. Robert Boulden won the grand prize, a small personal radio, for winning the annual magazine campaign for the third year in a row.

Other issues for the school year included more features. Articles about new clubs being formed, fashion reports, sports results, and dances were added. One gossip column that appeared was “Lookin’ Around With Bates and Brown”. In February 1941, the columnists asked “Could the movies in Elkton have a defective heating system? We’ve noticed several pairs nestled together, the boys holding the poor shivering girls in their brawny arms.”

Another column asked “Anne and Bunny visit Washington College quite often. Do they go there just to see their brothers?” Issues of the paper proclaimed “Beat Rising Sun!” and “Join a Club!”.

Alumni updates listed former students and where they attended college or worked. It was noted that Betty Eder was attending Mt. St. Agnes Junior College, Warren Boulden was attending Randolph Macon Academy, and Herbert Morgan was at Washington College.

The cheerful, carefree attitude of the newspaper continued throughout the school year and into beginning of the 1941-1942 school year. After the bombing of Pearl Harbor in December of 1941, the tone of the school paper changed.

The banner on the front page now proclaimed “Buy War Stamps!” instead of “Beat Rising Sun!”. The column about alumni now included former students in the armed forces. Many graduates were working at Triumph Explosives, Aberdeen Proving Ground, Continental Fiber, and the telephone office. Patriotic Orvella Mills worked at Triumph at night and attended high school during the day.

A feature named “With the Armed Forces” appears in November 1943. The column reported on former students who are home on furlough or those who have received a promotion. In December 1943 it was reported that Pascal DiPaola had arrived in the South Pacific safely and that Corp. Vincent DiPaola was stationed at Camp Pendleton. The January 1944 issue reports that Ensign F. Reed Hartnett, U.S.N.R. had been promoted to the rank of Lieutenant and was spending a few days with his parents on Howard Street in Elkton.

An assembly was held on April 4, 1944 to dedicate an honor roll plaque to remember former students who had been killed in action in the war. Organized by teacher Miss Katharine Bratton, the assembly featured music from the school band, a solo by School Superintendent McBride, and a speech by Maryland Governor Herbert O’Conor. Names on the honor roll were Francis Hoover, Walter Boulden, F. Reed Hartnett, and William Charles Keithly. The Elhisco had just reported in January that Ensign Hartnett had visited his family in Elkton.

In 1944, the Elhisco began to report on wounded and killed in action soldiers. The December 1944 issue reports that Ernie Foster, Lieutenant Robert Lawrence, and Leo Joseph Molitor were all wounded. Jack McCool, Lee Mahoney, and Arthur Cameron were all reported killed in action.

The content of the Elhisco gradually became more cheerful as the war ended. Baseball, softball, basketball, and track meet scores were reported as interscholastic sports returned. School plays were held and students held dances and proms. The January 1948 issue advertised a “Sadie Hawkins Dungaree Dance”. The cost was 35 cents and the newspaper advised “Girls, be sure to get your men early!”

The February 1956 Elhisco’s front page article is about ground being broken for the addition being built to the school. The auditorium would be converted to the cafeteria and the balcony would become storage. A new gymnasium and locker rooms would be part of the addition, as well as a new industrial arts room and art room. In 1958, the new Elkton High would open for students. The Elhisco remained the school newspaper.

The newspapers from the 1960s and 1970s were very school news oriented. Reporters and photographers for the newspaper covered school events. The pages were filled with photographs of games, dances, clubs, and proms. The homecoming issues contained pictures of the parades and homecoming queens. Some issues profiled individual students.

Football, baseball, track and field and other sports scores were reported on the back page of each issue. The 1980s and 1990s continued the tradition of capturing school events in photos. Editorials tackled topics such as teen pregnancy, abortion, gun control, and divorce.

The Elhisco used to be the source for everything that happened at Elkton High School. Eight issues per year were published (October through May). Sometime in the early 2000s, the Elhisco ceased to exist. In May 2013, the New York Times reported that only one in eight New York high schools and approximately two-thirds of schools nationally have newspapers. The cost and lack of student involvement contributed to the downfall of school newspapers.

Please join the historical society next Friday, December 6 for First Friday. Our annual silent auction will take place. The fun begins at 5 pm. All bids must be in by 7:30 pm.