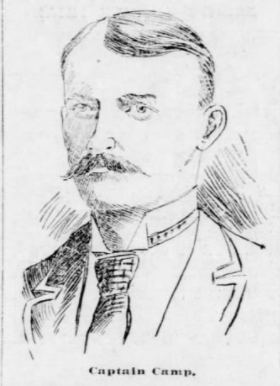 This artist’s sketch of Captain Thomas Camp appeared in the Cecil Whig. 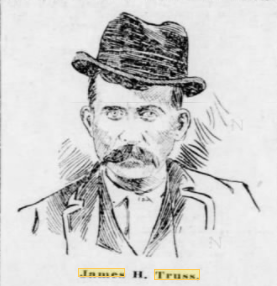 This sketch of James Truss appeared in the Cecil Whig.

This sketch shows the Deibert & Brothers Dry Dock. At the left you can see the old footbridge that stood before the canal was widened and a bridge was built. 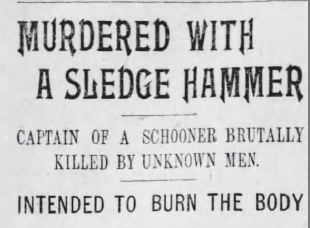 The Philadelphia Inquirer reported on the murder just 2 days afterward.

This headline was taken from the Baltimore Sun’s March 25, 1896 issue.

This artist’s sketch of Captain Thomas Camp appeared in the Cecil Whig.

This sketch of James Truss appeared in the Cecil Whig.

This sketch shows the Deibert & Brothers Dry Dock. At the left you can see the old footbridge that stood before the canal was widened and a bridge was built.

The Philadelphia Inquirer reported on the murder just 2 days afterward.

This headline was taken from the Baltimore Sun’s March 25, 1896 issue.

The afternoon of January 3, 1896 started out like any other morning. Mrs. Irwin Deibert and her five-year-old son Walter went for a walk along the water near Mr. Deibert’s place of business, Deibert & Brothers Dry Dock. Deibert & Brothers was located near the mouth of the Chesapeake and Delaware Canal on Back Creek in Chesapeake City. Young Walter looked down at the water’s edge and saw the body of a man, lying face down, in about two feet of water. He alerted his mother, and they went for help.

Authorities discovered that it was the body of Captain Thomas Camp, a well-known man along the Chesapeake and Delaware Canal from Goshen, New Jersey. The captain had been in Chesapeake City for ten days, waiting for repairs to his schooner, the Manaway. He had been sleeping on board his boat at night alone. Captain Camp’s skull had been crushed and his body was found with his hands in the pockets of his overcoat. He had last been seen alive on the previous evening around 5 o’clock when the men quit work at the dry dock. Investigators believed that the murder had taken place the evening before, because when Deibert’s men returned for work the next morning, they had not seen him.

Dr. Joseph Wallace, a Chesapeake City physician, was called to examine the body. He found that the captain’s head had been crushed by a large blunt object. His head had six wounds, three of which had fractured his skull.

The crime scene was searched, and Captain Camp’s empty wallet and a 12-pound blood-stained sledge hammer were found nearby. It was determined that the sledge hammer belonged to Deibert’s and had been taken from their work house, which had been broken into the night before. A pair of gum boots with spots of blood, a pair of mud-covered pants, and a walking cane were also found. Investigators also found that the inside of the work house had been saturated with coal oil.

A Coroner’s Jury was held by Coroner Dr. William C. Karsner. On that jury was a man named James H. Truss. Truss was an employee of Deibert & Brothers. While serving on this jury, Truss had seemed very interested in the murder, and had asked numerous questions about the crime. This is when authorities began to suspect him of being connected to the murder.

Truss was asked to make a statement and be questioned on the Sunday after the crime. During the questioning, Truss was shown the pair of gum boots that were found. Truss claimed they were his boots. After the examination of Mr. Truss, Sheriff Harvey Mackey searched his house. There he found a blood-stained shirt and Mrs. Truss gave him $60 that was in the sewing machine drawer. She told the sheriff that Mr. Truss had given her the money on Friday morning, the day after the murder, and he had stated that Mr. Deibert had given him the money because he was owed two month’s salary.

The sheriff now believed he had enough evidence to hold James Truss over until his preliminary trial later in the month. Truss was arrested and taken to the jail in Elkton to wait. On January 22, the courthouse in Elkton was filled to the brim with curious spectators. The Philadelphia Inquirer, The Cecil Whig, and numerous other newspapers claimed that 500 people attended the hearing. At one point in the hearing two benches collapsed due to the weight of the numerous people seated on them.

Magistrate P.H. Cleaver called the first witness, Mrs. Irwin Deibert, who along with her son, had discovered Captain Camp’s body. Dr. Joseph Wallace followed, reporting on the condition of the body at the crime scene. Mr. Irwin Deibert, the owner and manager of the dry dock, was called to the stand, where he contradicted Truss’s story about not having been paid for 2 months. Deibert testified that he never missed paying his employees, and that Truss’s monthly wage was $18.55. Also, Deibert recalled a conversation he had with Captain Camp about payment for the repairs to his schooner. The captain had the money to pay Deibert and he also remembered that Truss was present during that conversation.

Due to all of the information gathered at the hearing and the previously gathered evidence, the State decided that James Truss should appear before the grand jury. According to the March 21, 1896 Cecil Whig, the grand jury met in March, and after much deliberation indicted Truss. He would be brought to trial for the murder of Captain Thomas Camp at the end of March.

The trial of James H. Truss began on the morning of March 24, 1896 in the Circuit Court for Cecil County. Associate Judge Joseph A. Wickes presided. Truss pleaded “not guilty” to the indictment, and at the prompting of his counsel elected to waive a jury trial.

State’s Attorney William S. Evans and ex-State’s Attorney Austin L. Crothers made a short statement to the court, reviewing the facts brought out at the preliminary hearing in January. The instruments believed to be used in the murder were placed into evidence and a map of the scene of the crime was exhibited.

Dr. Joseph Wallace was the first witness called. He testified about his findings when he examined the captain’s body the day it was found. Also testifying were Chesapeake City merchants Henry J. Pensal and Henry Hager. Both men reported that Truss was one of their customers. He had accounts at each man’s store and was slow to pay them.

An Elkton man, J. Polk Racine, was called as a witness as well. He detailed a conversation he had with Mr. Truss after the preliminary hearing. Mr. Truss asked Racine, “How would it do for my sister to swear that I was saving money up to buy a bed room suit or something like that?” Truss then asked Racine to mail two letters for him. One letter was addressed to his wife, the other was addressed to Linda Savin, his sister. On the way out of the jail, Sheriff Mackey asked if Truss had given him any mail. Racine handed him the two letters.

When Sheriff Mackey was called to the stand, he shared the contents of the letters. The letter addressed to Mrs. Truss said. “Tell Linda to say that I was in her house from 7 to 8:30. Look under the oilcloth in the hall and you will find some money.” In the letter to Mrs. Savin, Truss begged her to tell authorities that he was at her house January 2 from 5:30 to 7:30. He promised he would give her $10 when he was released in March. Mackey testified that this was the evening when he searched the Truss’s house and found $30 under the oilcloth and $60 in the sewing machine drawer.

Various other people were called as witnesses, including the son of the victim Frank Camp. He was called to verify the amount of money his father had in his wallet the last time he had seen him. He stated that he had seen $100 in his father’s wallet, which was to be used to pay for the repairs to his boat.

On March 31 at 2:30 pm, Judge Wickes delivered the opinion of the court. James Truss was pronounced guilty of murder in the first degree. The judge carefully went over the circumstances of the case that had led him to his decision. He believed that it was conclusively shown that Truss was guilty and that he would be sentenced in four days.

According to the April 11, 1896 issue of the Cecil Whig, Truss’s sentence was pronounced in front of a packed courtroom. The convicted Truss showed very little emotion. Judge Wickes, with great emotion in his voice said, “The sentence of this court is that you be removed hence to the jail of Cecil County and be there confined till the day fixed for your execution, when you shall be taken to the place of execution and there be hanged by the neck until you are dead. And may God, in His infinite goodness, have mercy on your soul.” Truss did not react. His eyes remained fixed on the judge.

The June 27, 1896 edition of the Cecil Whig reported on the hanging of Mr. Truss. The Whig reported that the prisoner’s last meal consisted of ham, eggs, potatoes, bread, and coffee. He wore a black suit, a pressed shirt, and a black bow tie, all given to him by Sheriff Mackey. Ministers of the Elkton and Chesapeake City Methodist Churches, along with Sheriff Mackey and Deputy McAllister, accompanied the prisoner to the scaffold. When asked if he had any last words, the condemned man stated that he had no knowledge of the crime, and was completely innocent. As one of the ministers offered a prayer, Mr. Truss knelt. He was hung at 12:43 pm. Witnesses included Frank Camp, son of the victim and Winfield Broadway, brother-in-law of the murderer. Physicians John H. Jamar, George Rittenhouse, P.B. Housekeeper, T.A. Worrall, Joseph Wallace, Harry Cleaver, H.E. Clemson, and J.A. Peeples were also in attendance. Undertaker Henry Vinsinger of Elkton placed the body in a stained walnut casket, and he was buried on the property of the Alms House Property at Cherry Hill.

The trial was reported on by newspapers up and down the east coast, from Massachusetts to North Carolina. Information for writing this article was gathered from the Cecil Whig, Philadelphia Inquirer, the Delaware Gazette and State Journal, the Middletown Transcript, the Roanoke Times (VA), the Democrat Advocate (MD), the Baltimore Sun, the News and Observer (NC), the Brooklyn Daily Eagle (NY), the Morning News (DE), the Fall River Daily Evening News (MA), the Buffalo Commercial (NY), the Lancaster Intelligencer (PA), and several other newspapers. The sensational trail and hanging directed lots of attention to Cecil County in 1896.

The Historical Society of Cecil County is still closed indefinitely. Please email us or call and leave a message if you have any questions. We miss you.