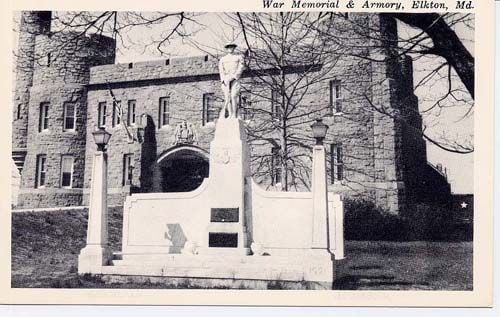 This postcard shows the armory building and the “Doughboy” monument. 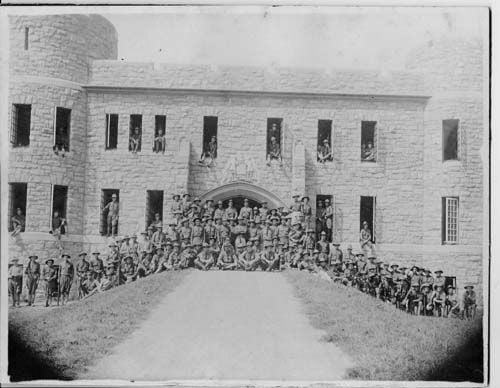 A group of WW I soldiers posing in front of the armory. 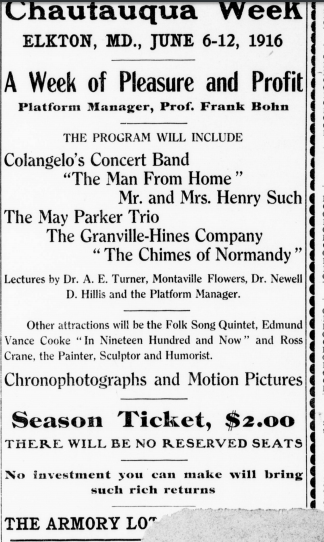 An advertisement from the June 3, 1916 Cecil Whig. 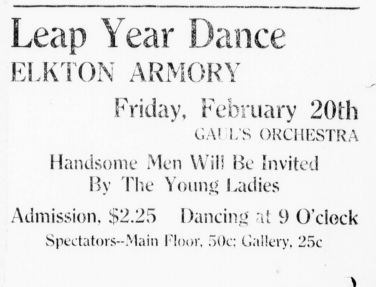 An advertisement from the February 14, 1920 Cecil Whig. 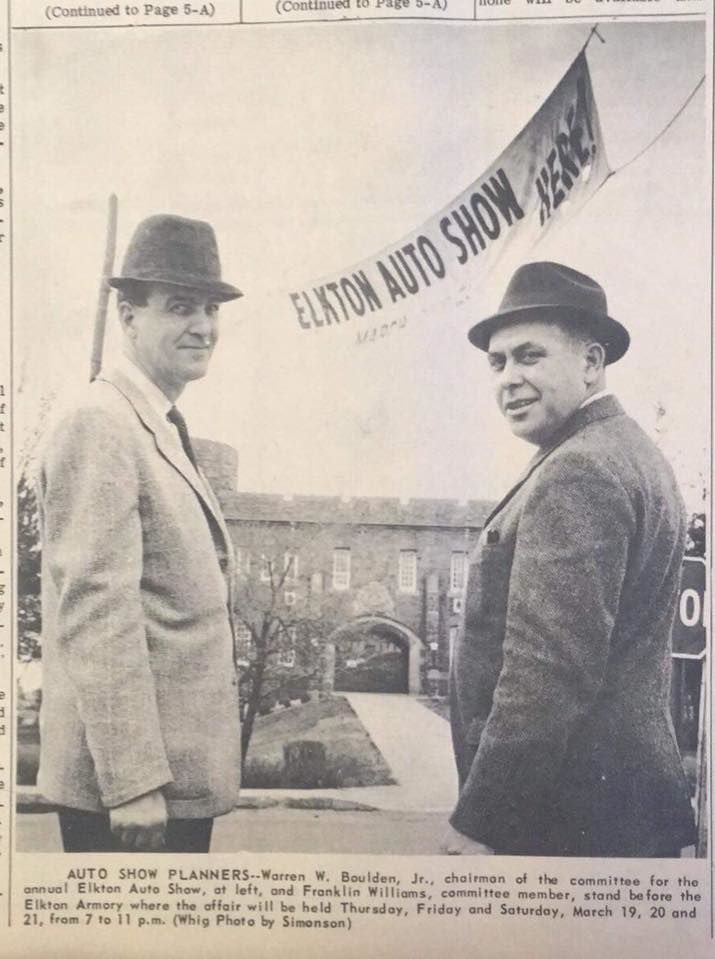 Car shows were held in the armory until the 1960s. This car show photo appeared in 1967. 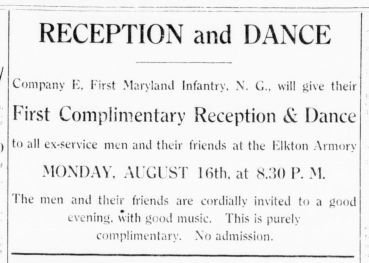 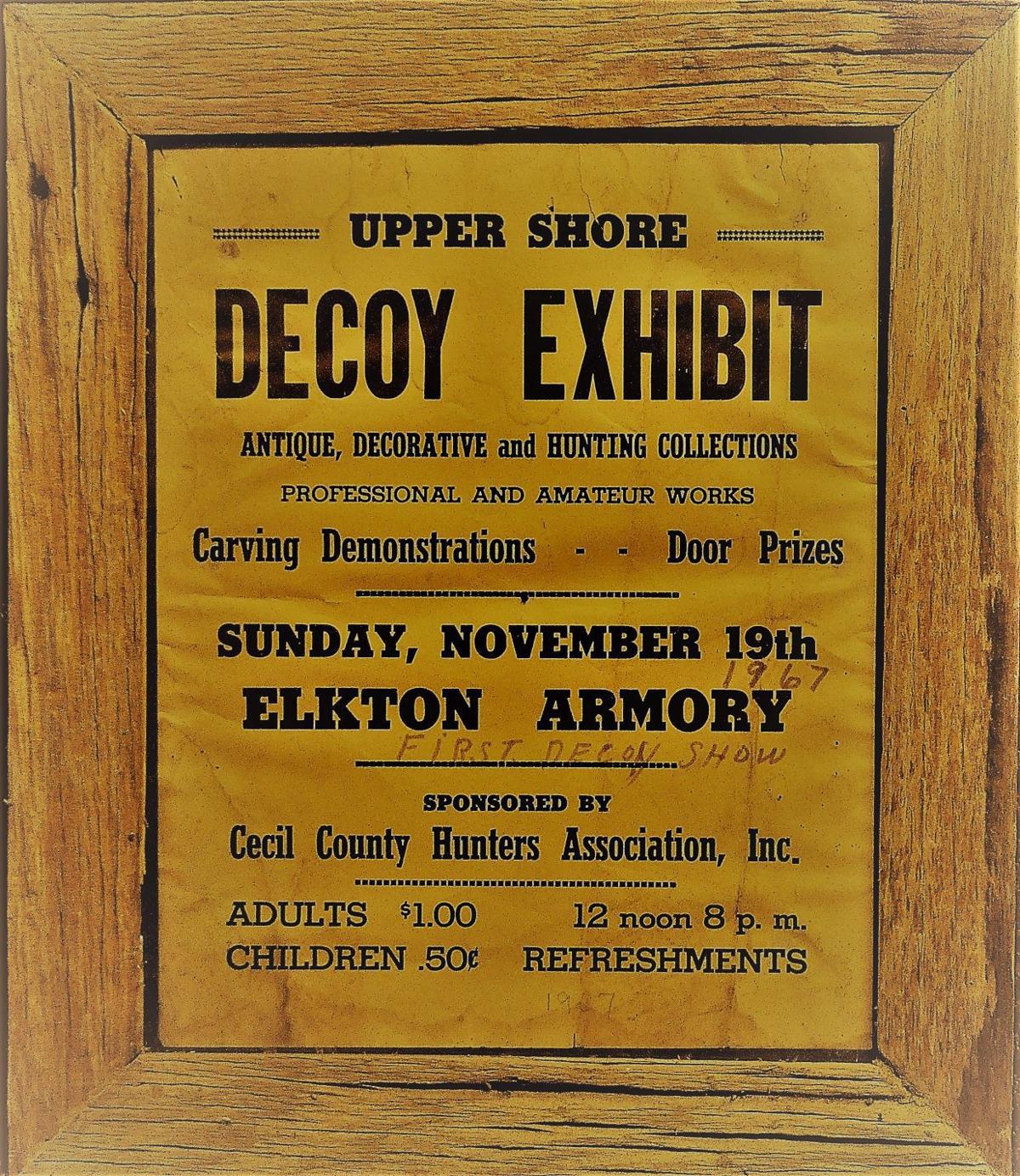 A poster for the first Upper Bay Decoy show. It was held in the armory in 1967. 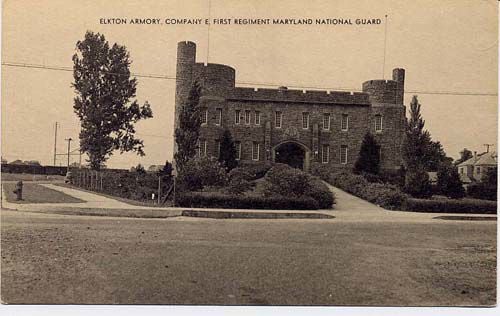 A postcard of the armory.

This postcard shows the armory building and the “Doughboy” monument.

A group of WW I soldiers posing in front of the armory.

An advertisement from the June 3, 1916 Cecil Whig.

An advertisement from the February 14, 1920 Cecil Whig.

Car shows were held in the armory until the 1960s. This car show photo appeared in 1967.

A poster for the first Upper Bay Decoy show. It was held in the armory in 1967.

A postcard of the armory.

In 2018, the Cecil Whig reported that the LTC James Victor McCool Armory, also known as the Elkton Armory, was declared “surplus property” by the Maryland Military Department. This imposing castle-like building has stood in Elkton for over 100 years. Built of brick and faced with Port Deposit granite, the armory was built by the State of Maryland for Company E of the 115th Infantry, 29th Division the Maryland National Guard. Scores of soldiers have trained there since World War I. The building was presented to the state of Maryland on December 29, 2014.

Currently the armory is the headquarters of the Maryland National Guard, but in the past 104 years, the armory has also served as a sort of community center. It has been a location for dances, auto shows, athletic games, and many more events.

From the beginning, the armory served as a venue for celebrations. The dedication ceremony, held on December 29, 1914 attracted state and local officials. Governor Phillips Lee Goldsborough was met at the train station by Company E and the First Regiment Band. Military drills were performed inside the spacious armory and a reception was held. According to the Cecil Whig, the evening concluded with a “Hop” given by Company E. Dancing continued on into the night, with music provided by the First Regiment Band.

Company E held its share of dances as well. After World War I, the unit held a Poppy Dance. Proceeds from the dance would be used for the aid and comfort of disabled World War I veterans. Company E also held New Year’s Eve dances and dancing was held after events such as Rally Day and after their basketball games.

The November 11, 1916 edition of the Cecil Whig reported that the boys of Company E arrived home to a large crowd. After leaving their train, they paraded around Elkton with the Elkton Cornet Band and the Singerly Fire Company. They proceeded to the armory, where the ladies of Elkton served them “coffee, sandwiches and cakes galore”. Friends and family joined them at the luncheon. Another luncheon was held 2 days later, and a dance followed the lunch. The Whig reported that “dancing and sociability followed to the wee sma’ hours”.

Company E had their own basketball team in the armory’s early days. According to the January 22, 1916 edition of the Cecil Whig both Company E and Cecil County High School, also known as Elkton High School, played their games at the armory. The newspaper reported that both teams would play games on the following Saturday evening, and dancing would follow. In the March 4 edition of that same year, it was reported that Walter Lindsay of Providence was practicing basketball with the Cecil County High team when he broke his left arm.

Elkton area schools also used the armory for its events. The 1916 senior class of Cecil County High School used the facility for its farewell dance in May of that year. The Alumni Association of the school held their annual banquet there until the 1930s.

The Women’s Club of Elkton also used the armory for events. The club held a “Café Chantant” on February 22 and 23 1916. A supper would be served between the hours of 6 and 8 pm, for fifty cents. A musical program was given by Jacob’s Orchestra. According to the Cecil Whig, at 8 pm there was dancing. Refreshments would be served and the bowling alley would be available for further entertainment.

In June of 1916 Chautauqua Week was held on the grounds of the armory. Season tickets were available for just $2.00, and a June 6 advertisement advised that “no investment you can make will bring such rich returns”.

The Pan American Airline Flight 214 plane crash of December 8, 1963 brought a brand-new use for the armory. The large number of fatalities from the crash required a very large space to serve as a morgue. The armory was large enough, so it was pressed into service for this purpose. It became a temporary Red Cross station and morgue for the 81 victims.

Whatever the fate of the armory, it is hoped that the grand history of this building is not forgotten. It has been a landmark in Elkton, and is filled with memories.

Currently, the historical society is closed due to the coronavirus quarantine. Once we reopen, please visit us and use our extensive collection!