During work of improving Brick Meeting House burial ground, the stone with A. J. was found. It was plowed up during the work of grading and enlarging the burial ground. 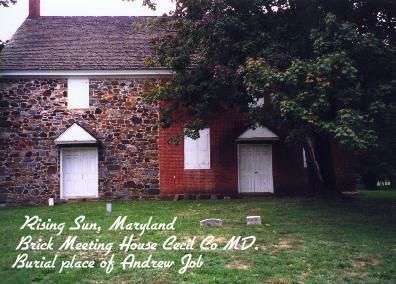 The Brick Meeting House is the burial place of Andrew Job, known as “The Hermit”.

During work of improving Brick Meeting House burial ground, the stone with A. J. was found. It was plowed up during the work of grading and enlarging the burial ground.

The Brick Meeting House is the burial place of Andrew Job, known as “The Hermit”.

The Oxford Press is full of Cecil County Stories. The following is a story from May 6, 1915 called “Located Hermit’s Grave”

During work of improving Brick Meeting House Burying ground the stone with A. J. was found. After years of disappearance the stone at the grave of Andrew Job, the hermit of Nottingham forest, has been unearthed. It was plowed up during the work of grading and enlarging the burying ground of Nottingham Preparative Meeting, more generally termed Brick Meeting House, Calvert, MD. The stone is a common formation and has the letters A.J. cut thereon. Today there are few indeed in that part of the county who are descended from the Job family, the nearest relative being Haines Job. ….. There are now some people residing in that part of Cecil County who recall having seen Andrew Job. For more than half a century he resided alone in a forest belonging to his estate, the woods now owned by William G. West. Mrs. Mary E. Ireland, Washington, whose knowledge of Brick Meeting House neighborhood folk is unquestioned, had an article in the Press of December 4, 1902 relating to Andrew Job from which we reprint the following:

His little log habitation consisted of two rooms, one above and one below; I do not know that he ever left it during the 50 years. He was said to be tall during his younger days, but when I saw him he was about eighty, and stooped much. His hair and beard were long, and his complexion of reddish hue. He scorned the style of clothing worn by men, and winter and summer was robed in a blanket, his only covering. Although a man of abundant means, he would not leave his retreat to procure the necessaries of life, and he would have but little to do with relatives, someone in whom he had confidence must take them to him. His wheat and corn he ground by pounding and for a long time my father, whom he had know for many years, went twice a year such things as he required.

I accompanied him once, when a child and was kindly treated by the hermit. My father introduces me, but Andrew did not speak or smile; but he gave a drink of sweet cider mad by pounding the apples, of which he had abundance on his land and squeezing the juice through his fingers. The goblet in which he presented it was a huge gourd, and he stirred the sugar in with his fingers. Being invited to partake, by it being held to my lips, I did not slight the old man’s hospitality

He did not, as a rule, take kindly to visitor; they bothered him by coming to see him out of curiosity, and when he caught sight or sound of them he hurried indoors and refused them entrance. He evinced no curiosity as to the doings of the world around him, from which he had withdrawn; spoke but a few words and those in a subdued tone, scarcely intelligible to my father and not at all to me; but I enjoyed the call. The room was devoid of any article of furniture except a rough bench. He stayed most of the time in the room above, from whence he slowly descended when my father called his name.

After we had left him, and had driven through his woods to the road, I found that I had left my sunshade, which was about the dimension of a tea plate. I was loath to leave it behind me and at the same time somewhat afraid to return for it, but my father reassured me, and very timorously I wound my way back to the low swelling, where Andrew stood at the door holding my sunshade, with the helpless expression of having something left upon his hands which bade fair to prove a burden. He handed it to me in perfect silence, and I received it at arm’s length in the same lugubrious manor.

He was upright and honorable in his dealings with my father and was always desirous of giving little trouble as possible. He kept no money about him, but gave orders upon those who had his property in trust. He kept control of his forest, and allowed no one to cut a stick form it. He lived in this way until a log falling from hi hearth, set his house on fire and burned it down, when he was compelled to live with his two nieces and nephew, children of his brother Daniel whose funeral I had attended and who were past middle age and unmarried. He lived there eleven years, until his death which occurred in April 1863, in the ninety-second year of his age. In him were the conspicuous and characteristics of the Defoe family, from Daniel down to the relatives of the present day; remarkable longevity, a disposition to remain unmarried, or to marry late in live, and the indomitable independence of the spirit so prominent in the character of Daniel Defoe and his niece, Elizabeth.

He was very discontented for several years after his left his solitude, but as the years and infirmities were upon him he became more reconciled; but until the time of his death he occasionally spoke of going off to live by himself.

It is a subject of regret that no likeness of him is in existence. A traveling photograph gallery once stopped for a short time in the road opposite his nephew’s home. Andrew took great pleasure in looking at it, and remarked that “it would be nice little house for a man to live alone in. If it were off the wheels”, but no one could induce him to enter it.

We hope you enjoyed this little slice of Cecil County history. Maybe the Hermit is one of your relatives!