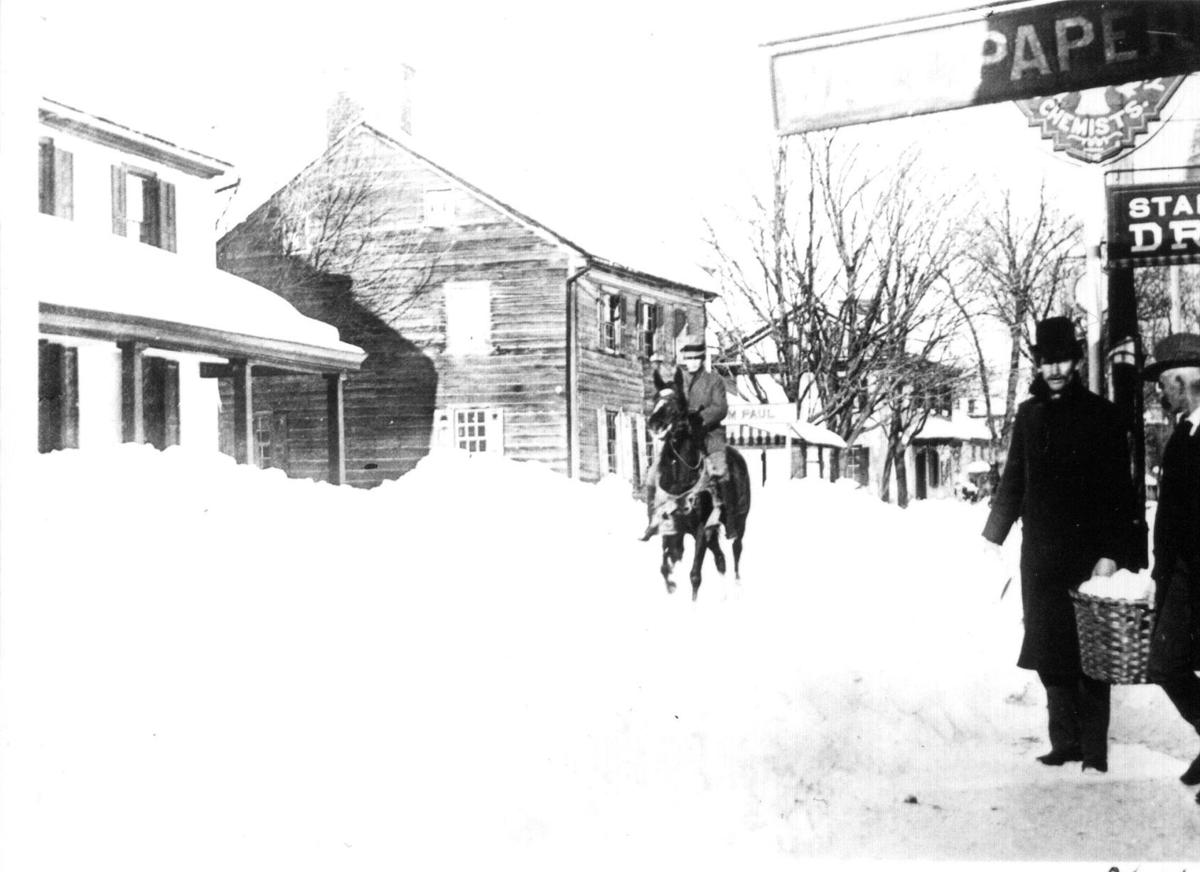 Although this picture of Main Street in Elkton was taken during the 1899 blizzard, rather than the 1888 blizzard, it shows how little snow removal was done in the 1800s. The 1888 storm had more snow than this! 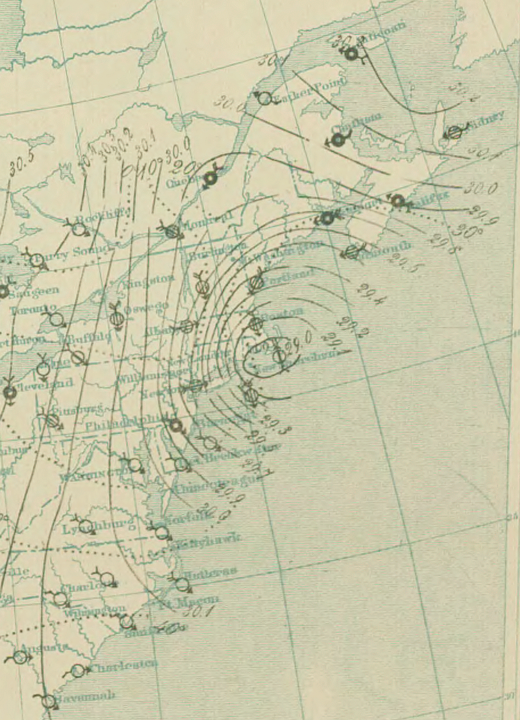 This NOAA surface analysis map shows the Blizzard of 1888 at March 12 at 10 p.m. Notice the hurricane-like spiraling shape of the storm. The National Weather Service defines a blizzard as a storm with “considerable falling or blowing snow,” winds in excess of 35 mph and visibilities of less than 1/4 mile for at least 3 hours. 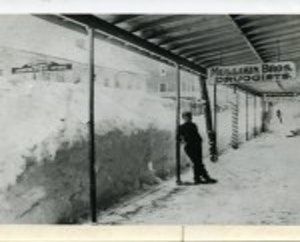 This photo was taken in Milford, Del., after the blizzard of 1888. Notice the path that was hand dug in front of the local druggist.

Although this picture of Main Street in Elkton was taken during the 1899 blizzard, rather than the 1888 blizzard, it shows how little snow removal was done in the 1800s. The 1888 storm had more snow than this!

This NOAA surface analysis map shows the Blizzard of 1888 at March 12 at 10 p.m. Notice the hurricane-like spiraling shape of the storm. The National Weather Service defines a blizzard as a storm with “considerable falling or blowing snow,” winds in excess of 35 mph and visibilities of less than 1/4 mile for at least 3 hours.

This photo was taken in Milford, Del., after the blizzard of 1888. Notice the path that was hand dug in front of the local druggist.

CECIL COUNTY — Weather forecasters this week have warned us of coming dangerous storms. The State Highway Administration has time to get its snowplows ready, and load the trucks with salt. Recently, road crews have been applying brine to the roads in anticipation of icy roadways. Citizens make a mad rush to the local grocery stores to purchase toilet paper, bread, and milk.

In 1888, the science of weather forecasting was in its beginning stages. Basic meteorological instruments had been around for a while, but the advent of the telegraph made it possible to receive, record, and analyze weather observations from distant locations. There was no AccuWeather, no Weather Channel, and no Justin Berk to tell us about coming storms. Often there was no warning at all before big storms.

Sunday, March 10, 1888 was the beginning of one of the worst storms the east coast of the United States ever experienced. People from the Chesapeake Bay to Maine were caught unaware as the blizzard struck. Snow amounts were hard to measure because of the drifting, but they were estimated to be between 10 and 58 inches. Many boats were caught on the Chesapeake Bay, causing many to capsize and sink. The Chesapeake Bay oyster fleet was hit especially hard. Approximately 40 men died after their boats capsized. The March 17, 1888 edition of the Delaware Ledger reported that in Lewes, DE 23 vessels had gone ashore and 18 sailors were frozen to death in the rigging of the boats. In nearby Newark, DE it was reported that the steeple of the Presbyterian church “swayed considerably before the force of the wind.”

Many narratives about Cecil County’s experiences exist in the local newspapers of the time. The Midland Journal, the Elkton Appeal, the Delaware Ledger, and the Cecil Whig all reported that on Sunday March 10, the temperature was 50 degrees, and the area experienced heavy rain that was so intense that the streets and roads were flooded. Between 7 and 9 pm, the rain changed to snow. The Cecil Whig described the snow as “large flakes, falling close together”. The snow fell rapidly to the frozen ground.

By daybreak on Monday, the temperature had fallen to 20 degrees and the wind was blowing a gale. The wind was “howling and tearing along at tornado speed”, according to the Delaware Ledger. The air was filled with the blowing snow, and it whirled the flakes into piles.

On Tuesday the temperature dropped again, this time to 10 degrees, according to the Midland Journal. The falling snow became drier, allowing it to blow. The wind increased and “scoured the surface, lifted it in clouds, and filled the roads full of drifts”.

Wednesday, the snow continued to fall, but the winds decreased. It was reported that the snow fell until after 2 pm and then the temperature increased to 50 degrees.

Cecil County and the surrounding areas were paralyzed by this storm. All forms of transportation were at a standstill. Telegraph communication was cut off. The Delaware Ledger reported that the telegraph wires at the Elkton depot were “hanging about the depot like spider webs”. Roads in the northern part of the county along the Pennsylvania line were impassable. More snow had fallen there than in the southern part of the county.

According to the Elkton Appeal and the Cecil Whig the stage from Lewisville, PA failed to reach Elkton on Monday and Tuesday. On Wednesday driver John Lungren walked a third of the way and reached Elkton before noon. He reported that he saw drifts in some places between ten and twelve feet high. The Chesapeake City stage, on its trip to Elkton, became stuck in a drift on Monday. The driver sent the mail on to Elkton by a man on horseback, and had great difficulty returning the passengers to Chesapeake City.

Drifting snow wasn’t the only reason that railroad traffic came to a standstill. A combination of saturated ground, high winds, and the weight of the snow and ice on the poles and wires led to the leveling of hundreds of telegraph poles between Philadelphia and Baltimore. The poles fell across the south bound track. According to the Cecil Whig, every single pole from below the plank road in Elkton to Elk Neck crossing was broken or leveled to the ground.

The Whig also reported that several citizens of Elkton had been attending the Methodist conference in Wilmington, DE and had planned to return to Elkton on Monday night. They left Wilmington at 11:30 pm and did not reach Elkton until 10:30 on Tuesday morning. Small villages like Cherry Hill were completely cut off from the news. Newspapers and mail were not received in Cherry Hill for three days, according to the Whig. It was also reported that in Cherry Hill “public school teachers were housed at home, fearing, if they ventured out, a gust of wind might take them away from this sublunary sphere”. The Midland Journal praised Miss Owens, the teacher at the Chapel School near Woodlawn, who opened school every day of the blizzard. The newspaper commented that such trifles as blizzards didn’t stop her!

It was reported that John Warren of the Fourth District almost froze to death trying to save his prize hog, “Beauty White”. On Monday, he realized he could not see the hog’s pen and began digging a 15 feet long path to it. He reached the pen and discovered that his hog had survived. While caring for the hog, the path he had dug filled in and he had to dig another path back to his house. He continued to dig a path to his house and in doing so broke the handle off his shovel. When he reached his house, he became “insensible”, and his wife had to bring him back to consciousness.

After the blizzard, the Midland Journal was not pleased with the lack of snow removal in the county. They commented that County Commissioner Thomas C. Bond thought it was “more economical to open the drifts by solar heat than with shovels. That same week, Commissioner Bond wrote a letter to the Cecil Whig, in which he gave the reason for not attempting to remove the snow. “To do so would cost, by reasonable calculation, several thousands of dollars, as the snow is packed so hard it would have to be removed almost entirely by shovels over 400 – 600 miles of road”.

Most of the information for this article came from old local newspapers that can be found at the historical society. All are digitized and searchable from our computers. We are open on Mondays and Thursdays from 10 am – 4 pm and on the first Saturday of each month from 10 am -2 pm.