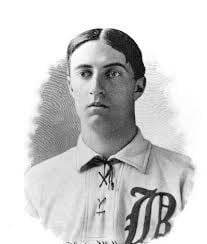 A young Willis during his time with the Boston Beaneaters. 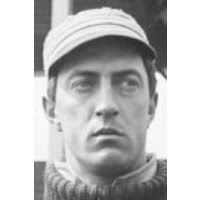 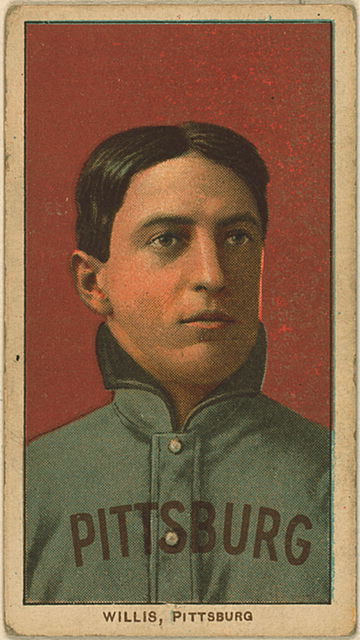 Willis trading card from his time with the Pittsburgh Pirates. 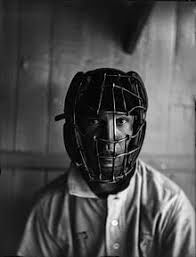 A young Willis during his time with the Boston Beaneaters.

Willis trading card from his time with the Pittsburgh Pirates.

Fair Hill — Spring has sprung!... well, the bunnies and foliage are springing, but we’re all certainly not. Since there are no sports on TV, and since Opening Day has been postponed, I thought it only fitting that I should write about baseball. After all, what’s more “spring” than baseball? So, here’s the story of a local Cecil County born sports legend, whom I just happen to descend from (first cousin, three times removed to be exact, but who’s keeping track?), and whose birthday coincidentally was this past Easter Sunday.

Baseball Hall of Famer, Victor Gazaway Willis was born on April 12, 1876 to Joseph T. and Mary A. Willis in the Iron Hill Station settlement of Cecil County. At some point during his early childhood, the family moved to nearby Newark where his father Joseph was a prominent carpenter and building contractor. He built several structures in the Newark area, including buildings for Delaware College (now U of D) and was well known in the community.

Growing up, Willis received his education from the prestigious Newark Academy, which was known for educating many famous men during its time, and itself has some Cecil County ties. Willis played many sports throughout high school, but baseball seemed to be where he found his true talent.

By the time Willis was 18 (1894), he was playing for Delaware College, as well as pitching semi-professionally around the state. This earned him the nickname “Delaware Peach” which is still a name associated with his legacy. Unfortunately, Willis’ father died unexpectedly in October of 1894 and never got to see his son go on to play professionally.

After a few years of making his rounds amongst semi-pro teams, Willis was picked up by the major leagues. On April 20, 1898, he made his professional debut with the Boston Beaneaters, one of the top teams of the late 19th Century. During his first two seasons, he boasted an incredible 52-21 record, with his second season being his all-time best. It’s been said that if there was an MVP award during the 19th Century, Willis would have undoubtedly won it for his 1899 year. In 1902 he completed 45 games, which garnered him the post-1900 record for most games completed in a single season.

Willis somehow managed to juggle baseball and love, marrying his wife of 47 years, Mary Jane Minnis in February of 1900. Willis and Mary had two children; a daughter, Gertrude who was born in 1901, and a son, Victor Jr. born 14 years later in 1915.

Willis played for Boston until 1905 and then was traded to the Pittsburgh Pirates where he played until 1909 alongside teammate, the great Honus Wagner. Pittsburgh won the World Series that year, losing only one game in the series to Ty Cobb’s Detroit Tigers. Willis was then traded to the St. Louis Cardinals in 1910 and made his last MLB appearance on September 5, 1910 before retiring at the age of 34.

Willis returned to his hometown of Newark and in February of 1911, purchased the Washington House, a hotel located on Main Street (which would later become the famous Stone Balloon).

Speaking of pandemics, Willis himself was no stranger to rampid illness. In late November of 1911, not even a full year after purchasing the Washington House, Willis was stricken with Typhoid. The Evening Journal (out of Wilmington) reported that Willis had been sick for five weeks at that point. Its plausible that Willis was infected by one of his hotel patrons. Perhaps even contracting the disease indirectly from “Typhoid Mary” Mallon, which was responsible for infecting countless people throughout New York during the early to mid 1900’s and who spent years in isolation (we’ve got nothing on her) for being an asymptomatic carrier of the disease.

Willis operated Washington House over the next 36 years until his death, but he also continued an active role in baseball, coaching several local teams.

Willis died on August 3, 1947 at Union Hospital in Elkton several days after suffering a stroke. Sources vary on this date, with some siting August 4th as the date of his death. He was 71 years old. Willis’ funeral was attended by many as he was well known and liked among his community. He was buried in St. John’s cemetery in Newark.

During his 13-year career, Willis pitched 50 shutouts and won a total of 249 games. He held a 2.63 lifetime ERA, which is ranked 59th overall (Cy Young holds the 58th spot). Known as a “workhorse,” he completed 388 out of 471 starts, which is pretty incredible. On August 7, 1899, Willis pitched his only no-hitter, which earned him another record — the last pitcher to throw a no-hitter in the 19th Century. He was inducted into the Baseball Hall of Fame in 1995.

Willis’ grandfather (my 3rd great grandfather), James Kilgore Willis built what is now referred to, and aptly named, The Willis House, a mid-19th century home built in the typical stone and mortar style of the era. Willis most likely spent time in the house at least as a child, perhaps visiting his grandparents. The structure is in ruins now and is part of the Fair Hill Natural Resource Management area. If you’re curious though, and up for a little hike, you can visit the ruins which are on a trail north of the Big Elk Chapel, accessible from the Gallaher Road parking lot.