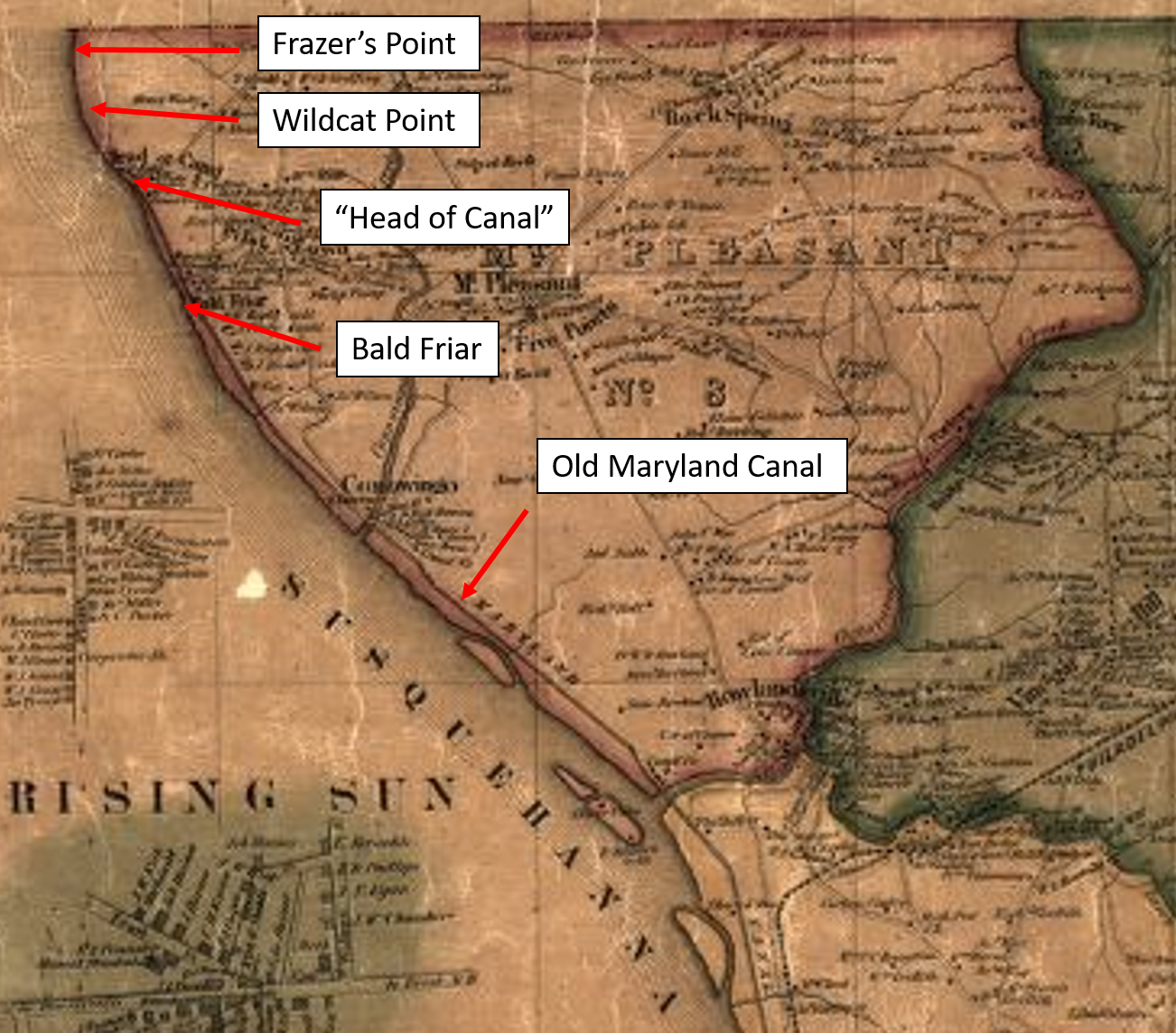 This 1858 map depicts points of interest on the route. 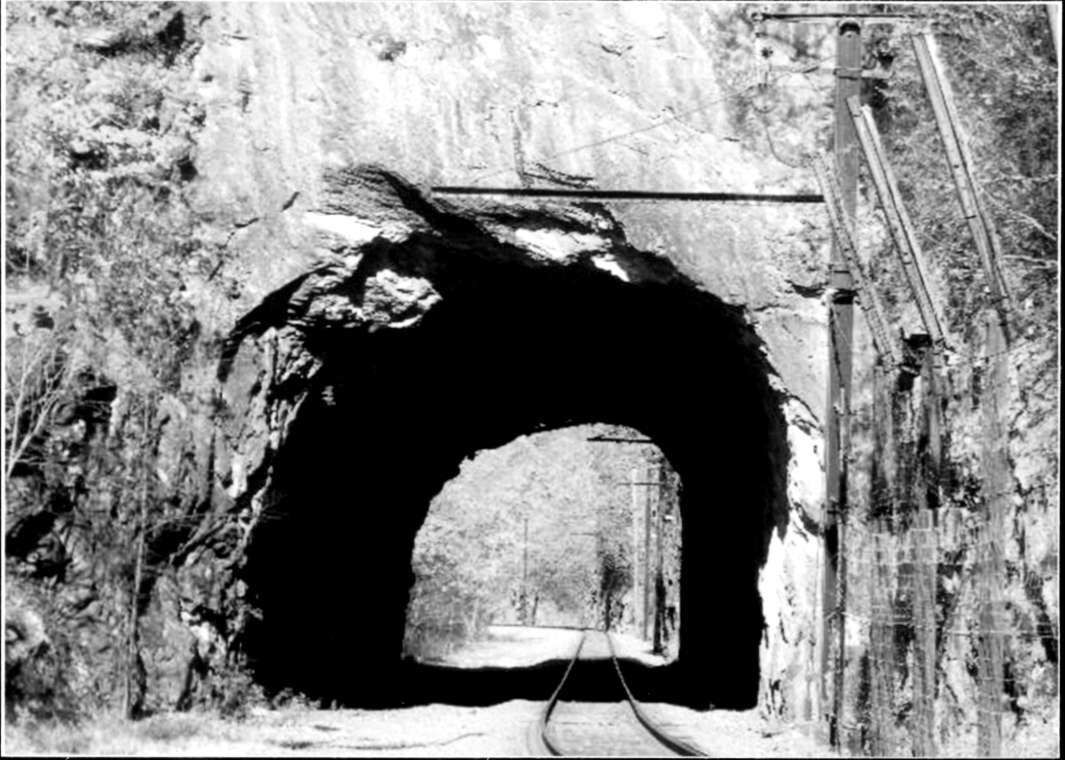 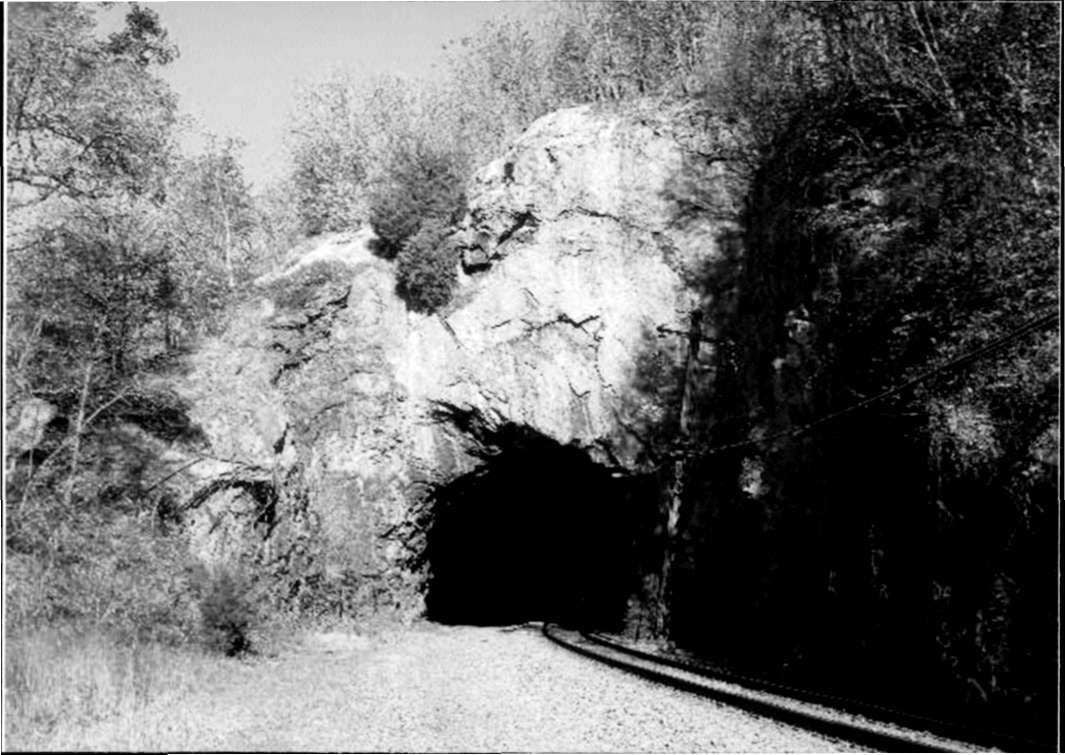 This 1858 map depicts points of interest on the route.

In the April 8, 1871, edition of Cecil Whig, an article describing the ongoing work creating the Columbia and Port Deposit Railroad was published. The C&PD began construction in 1866 and completed in 1877. Conrail and Norfolk Southern owned the line in recent years however; passenger service was stopped in 1978.

“A Correspondent furnishes the Oxford Press with the following letter which contains some matters of local interest the site of his adventures lying in the Northwestern corner of this county.

Ten days ago in company with a friend from Virginia we visited the banks of the Susquehanna, at points where men are now busily engaged at work grading the Columbia and Port Deposit Railroad.

The principal places of interest and at which the greater part of the work is nearly completed, are Bald Friar, “ the head,” Wild Cat and Frazer’s Point. All the above named, are in Maryland, and commencing north and following the river in the direction of its outlet, we came first to Frazer’s Point, a bold rocky promontory projecting far out into the river. This and the rough water just opposite, in the “raft channel,” have long been known as the Scylla and Charybdis of the lower Susquehanna.

Situated about a half a mile further downstream, is a high bluff, composed chiefly of a stratified rock much resembling gneiss with numerous veins of quartz extending through it. That is known as the Wild Cat.

Before excavations were made this rock, on the side next to the river, presented an almost perpendicular wall, eighty-five feet in height. Being partially surrounded by “deep water” the raftmen’s foot way was made around it with planks supported on iron pins securely driven into the side of the rock.

The head is a term applied to the place where the water of the river, by means of a wing dam, was made to enter the old Maryland Canal, a public work made and operated by a past generation. This Canal extended from this entirely deserted and demolished village, to tide water, a distance of nine miles. At one time, all the rafts and arks were passed through this canal, an outer channel not then having been made by the State.

Bald Friar is the name of a point on the Susquehanna, where the river can be forded ‘‘in low water.” We are under the impression that this is the last “fording” in the direction of the mouth of the river. It was also known as a ferry many years ago. The Bald Hills are situated opposite on the Harford county shore. An observer looking at one of these from the Cecil side can, with a little stretch of the imagination, discern the outline of a man’s head, minus the hair. From this circumstance it is said to have derived the name Bald Friar.

The amount of work that has been accomplished since excavating and blasting was commenced some months ago, taking into consideration the small number of hands employed is really surprising. The whole side of Wild Cat from the apex to the grade level, a distance of eighty live feet, has been blown off, and the debris removed to places on the road above and below.

While at Frazer’s we saw the effects of a blast of that highly explosive mixture, NitroGlycerin. By its power rocks are torn from their beds and hurled with a I fearful velocity far out into the river. The contractor, Mr. Snyder, informed us that he manufactured the explosive mixture on the ground, and it was used only under his immediate supervision. His method of exploding was to produce a concussion. This is attained by “touching off” a small quantity of gun-powder in the drilled chamber containing the NitroGlycerin. An ordinary fuse answers the purpose.

In a few weeks, all the work at these places will have finished, accepting the leveling up, and the great impression prevails that we will have railroad communication from Conowingo to Port, and localities further southward ere long.

The rocks at Wild Cat, and in fact anywhere between the Bald Friar and Frazer’s,are worthy of a visit by anyone having a taste for geology and mineralogy. Here a fine opportunity of studying some of the laws of nature, as manifested in different geologic periods, is afforded.

In our hurried visit we could not devote enough time to critically examine the different formations here presented. We noticed however that the Wild Cat, which has been recently cut away, presented a remarkable illustration of what is termed in our text books as contorted lamination of stratified rocks. Here it is found pursuing a regular serpentine course, evidently the result of a powerful lateral and vertical pressure.

Scattered through the main rook arc veins of quartz, which we supposed to be veins of segregation. In many of the fragments of rock that had been blown oft’ the main body, square prismatic crystals of the bi-sulphuret of iron are met with. These have a bright golden color and attract the attention of many of the workmen who have an idea that these little cubes are of a precious nature.”