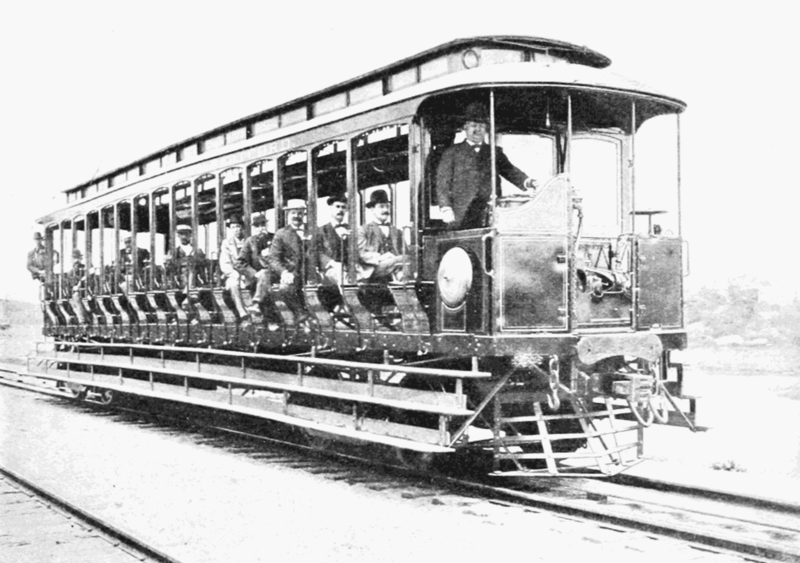 Had the railway been built, trolley cars like this one in New York might have been seen traveling between Elkton and Chesapeake City. 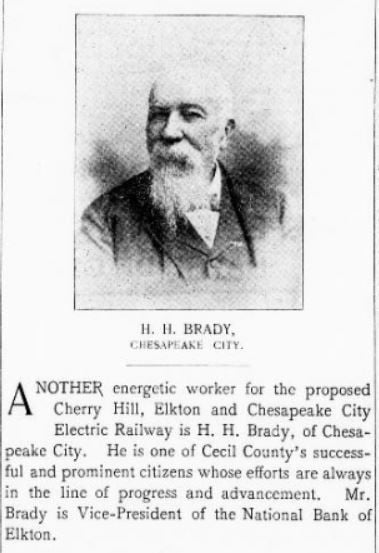 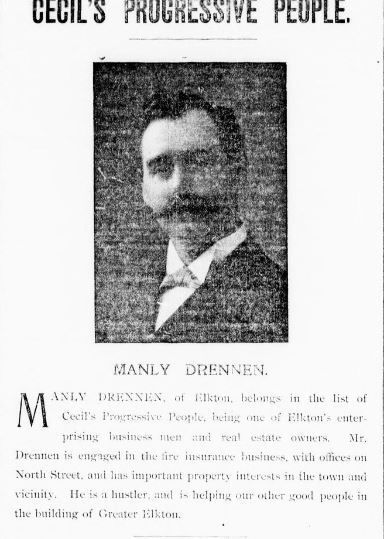 Manley Drennen was one of the incorporators of the Cherry Hill, Elkton, and Chesapeake City Electric Railway Company. 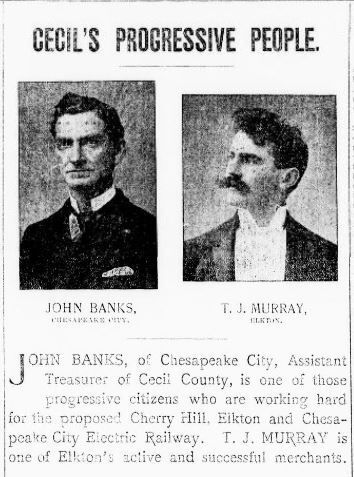 John Banks, seen here with T.J. Murray, was identified by the Cecil Whig as one of Cecil’s Progressive People. He was also one of the incorporators of the Cherry Hill, Elkton, and Chesapeake City Electric Railway Company. 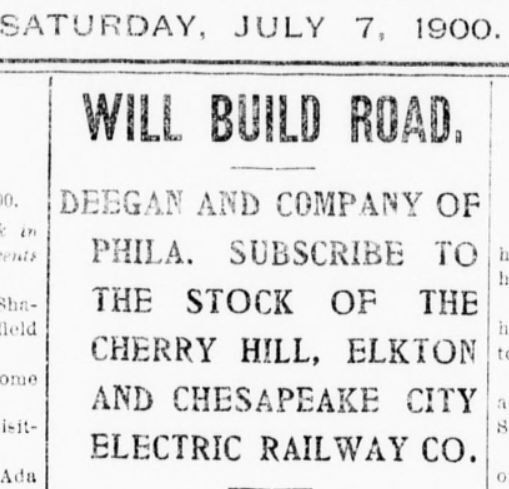 A headline from the July 7, 1900 Cecil Whig announcing the coming of the new railway.

Had the railway been built, trolley cars like this one in New York might have been seen traveling between Elkton and Chesapeake City.

Manley Drennen was one of the incorporators of the Cherry Hill, Elkton, and Chesapeake City Electric Railway Company.

John Banks, seen here with T.J. Murray, was identified by the Cecil Whig as one of Cecil’s Progressive People. He was also one of the incorporators of the Cherry Hill, Elkton, and Chesapeake City Electric Railway Company.

A headline from the July 7, 1900 Cecil Whig announcing the coming of the new railway.

Note: This story originally appeared in the Cecil Whig in 2017.

In the late 1800s and early 1900s, short distance travel within Cecil County was mostly limited to horse-drawn wagons and carriages or boats. As the county moved toward a new century, groups of progressive thinking individuals pondered the idea of having systems of electric railways to connect the towns. One of these systems was to be the Cherry Hill, Elkton, and Chesapeake City Electric Railway.

In 1896, articles of incorporation were filed at the county clerk’s office by the Cherry Hill, Elkton, and Chesapeake City Electric Railway Company of Cecil County. Nine Cecil County men were listed as the incorporators and directors of the company. According to the March 14, 1896 Cecil Whig, the men were J.C. Price and R.A. Duhamel of Earleville; George S. Wooley and John Banks of Chesapeake City; C.H. Smith, Manly Drennen, and William J. Smith of Elkton; and Frank H. Mackie and T. Taylor Reynolds of the Fourth District. Maryland State Senator Austin Crothers gained permission to introduce a bill in the state legislature to transfer $58,000 of state money to this project. The incorporators had to secure sufficient funds to insure the construction of the road. The proposed project would make the trolley road able to carry both freight and passengers.

As the company waited for state funding, excitement about the railway seemed to die down until 1900. In the March 31 edition of the Cecil Whig, it was reported that Gov. John W. Smith approved the transfer of the $58,000 of state money to secure the incorporation of a company to build the railway line. This time, fourteen men were listed as incorporators. They were H.H. Brady, J.H. Steele, and John Banks of Chesapeake City; and J.M. Tucker, I.D. Davis, Manley Drennen, L. Marshall Haines, W.H. Mackall, John S. Wirt, W.H. Eder, S.J. Keys, Frank H. Mackie, and Dr. Howard Bratton of Elkton. A subcommittee of this group was appointed by company president H.H. Brady to sell bids and subscriptions of stock for the building of the road.

In June of 1900, a group of investors from Philadelphia known as the King Syndicate came to Elkton and stated their interest in the building of the railway. Clarence P. King, head of the King Syndicate, along with their Elkton attorneys Joshua Clayton and Albert Constable, Jr. and Senator Austin Crothers met with the incorporators to discuss investing in the railway system.

Meanwhile, another group of Philadelphia investors came to town with an offer for the investors. Thomas Deegan and Company of Philadelphia, offered a 10% payment on their subscription to the project. In the July 7, 1900 edition of the Cecil Whig, Mr. Deegan proposed that the railway be a “standard and substantial system, with standard gauge tracks.” He stated that construction would begin in about three months, and the company would purchase poles and ties from local people. They would employ approximately 200 local workers. The cars would run about every thirty minutes between Elkton and Chesapeake City and the fare for this route would not exceed fifteen cents.

On July 28 it was reported that engineers were making a survey of the route between Elkton and Chesapeake City and securing any needed right of ways over private properties. The company and contractor intend to run the track on the east side of the public road going in the direction of Chesapeake City. In narrow sections of the road, the company might need to purchase land from property owners. The railway would cross three bridges between Elkton and Chesapeake City, not including the canal. In addition, the company assured citizens that horses travelling on the public road would “easily become accustomed” to the noise of the railway cars.

In August, the county granted the company the privilege of using the public roads for the railway. Company representative Ambrose Higgins promised the county commissioners that the company would spare no effort to have the section of railway between Elkton and Chesapeake City finished by early fall. A power house would be located at Perch Creek, and new bridges would be built over Back Creek and at Waterford, where carriages and wagons must ford the water.

In October, the Elkton Town Council granted the railway company the right to construct a single track and overhead wires on the streets of the town. The proposed route would be Bridge Street, from the iron bridge to East High Street to Lort Lane, south to Main Street, along Main Street to Bridge Street and along Singerly Avenue from High Street to the P. W. & B Railroad. Overhead wire would be supported by wooden poles 23 feet high. The town council stipulated that the railway must be constructed by September 1, 1901 or the agreement would be null and void. Work would begin in a few weeks.

Delay after delay occurred in the next year. During this time, the Attorney General’s office ruled that the awarding of state money to the railway company was unconstitutional. The company’s lawyers questioned this ruling, but the company did not wish to file a lawsuit. They felt that doing so would further delay construction. After purchasing three acres along Perch Creek to build the power house, the company promised to begin building in the spring. New investors would have to be found to make up for the money the state would not provide.

What if this electric railway had been built? The streets of Elkton would have certainly looked different. Augustine Herman Highway (Route 213) would have looked different as well. What would have happened a few years later when automobiles appeared on Cecil’s roadways?

The Historical Society of Cecil County is closed for the rest of 2020. Please feel free to email us at cecilhistory@gmail.com.