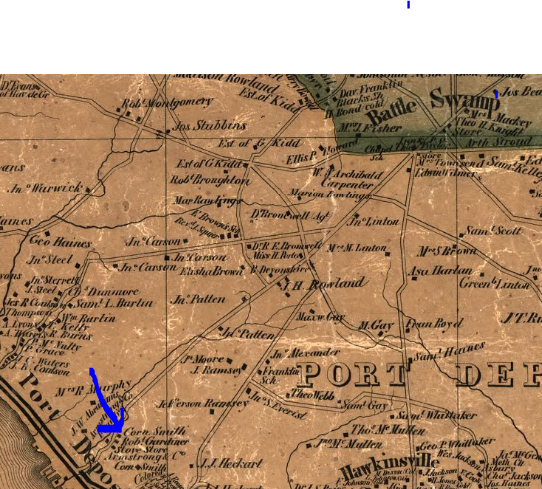 The blue arrow indicates where “Corn. Smith” had land just outside of Port Deposit. This could be the location of the Smith’s Grove school.

This is the advertisement that appeared in every issue of the Cecil Whig in the year 1850.

The blue arrow indicates where “Corn. Smith” had land just outside of Port Deposit. This could be the location of the Smith’s Grove school.

This is the advertisement that appeared in every issue of the Cecil Whig in the year 1850.

In the mid-1800s, public schools in Cecil County didn’t exist. They came along in the late 1800s. Private schools, such as West Nottingham Academy existed, but only boys were admitted. Wealthier people sent their daughters to schools designed for young ladies, where they would learn skills such as needlework, art, and music, that were considered appropriate for accomplished females.

In the Cecil Whig, from February 1850 until February 1851, there appeared advertisements for a boarding and day school for young ladies. The school was outside of Port Deposit, in a spot called Smith’s Grove. Smith’s Grove was a farm, probably owned by Cornelius Smith. Unfortunately, a picture of this property could not be found, but according to an estate sale advertisement in the Cecil Whig in June 1860, this farm was approximately 160 acres. Ten of these acres contained an apple orchard and about thirty acres were woods. There was also a large frame house and two barns.

Boarding pupils paid $110 per year. A payment plan was available as well — $27.50 per quarter. This included board, washing, and tuition. Pupils were requested to bring their own bed and napkins, but bed, bedding, napkins, and towels were available for an extra $2. Tuition included, according to the advertisement, “the common studies, the various branches of Mathematics, Natural and Moral Philosophy, Rhetoric, Kame’s Elements (Kame’s Elements of Criticism was a textbook about criticism of art and literature.), Logic, Watts on The Improvement of the Mind (a book on the importance of critical thinking and rational balanced inquiry), History, Botany, Chemistry, Astronomy, Geology, Minerology, and Physiology.”

For additional fees, students could take lessons in other subjects. According to the advertisement Drawing cost $3, Painting was $3, Music cost $10, Use of a Piano cost $2, French cost $6, Latin cost $8, and Needlework cost an additional $2.

Day pupils had the same cost for tuition and extras. If a pupil was under the age of eight, there was an additional $3 fee. If between eight and twelve, there was a $4 fee, and if over the age of twelve, a $5 fee.

The principals of the school were Mrs. M.E. Beach and Miss S.J. Turney. Mrs. Beach had previously served as the head of a female seminary in New England. The advertisement included the endorsement of Mrs. Beach by seven local men. The advertisement boasted that Mrs. Beach had “the familiarity with all the branches necessary to be taught with her untiring energy, love of the work of instruction and her peculiar tact in discipline combine to render her one of the best instructors to whom the education of young ladies can be entrusted”. They were Rev. George Burrows, Colonel J.J. Heckart, Allen Anderson, Esq., Mr. Edwin Wilmer, G. Purnell, Esq., Mr. J.W. Abrahams, and Mr. J.W. Maxwell.

Travel to the school was possible by train or steamboat, according to the advertisement. Both ran between Baltimore and Philadelphia daily. Steamboats docked at nearby Port Deposit on a regular basis.

The description of the school’s location and ground also appeared in the advertisement. “The institution is situated on the road intersecting Bel Air and Wilmington road and between Port Deposit and Battle Swamp, Cecil County, Md. The location is very elevated and surrounded by a large and beautiful grove where pupils may enjoy their juvenile sports, and be protected by the foliage from the rays of the sun.” The road between Port Deposit and Battle Swamp is probably the Jacob Tome Highway of today.

Also appearing in the advertisement was a recommendation of the location of the school. “The following gentlemen recommend the location of this institution as having been one of the most healthy residences in this county”, says the advertisement. The following men were listed – Allen Anderson, Esq., William Norris, MD, John Evans, MD, H.B. Broughton, MD, and W.B. Rowland, MD. Cornelius Smith, Esq. is listed as the former resident of the school building.

Cornelius Smith was known as a farmer and philanthropist who financed road construction to create jobs. He was also known as a person who aided public education, which technically didn’t exist in Cecil County until the late 1800s, but possibly may mean he was aiding the education of the public. In his will, he left $2,000 to the M.E. Church of Port Deposit and specified that the money should be invested, with the interest applied to “keep a good school in that town forever”. Smith also was one of the early owners of a house in Port Deposit, which he willed to his step-grandson Lucius A.C. Gerry in 1858. The 1850 U.S. Census shows Smith living inside the town of Port Deposit with wife, Hannah, and his step-grandson, Lucius. This house is known today as the Gerry House.

Smith died in 1858, and an advertisement for a trustee’s sale of “Valuable Real Estate” appeared in the Baltimore Sun on June 16, 1860. The sale was to be held at the “Hotel of William Crumpton in the town of Port Deposit, on TUESDAY, the 26th of June, 1860, at 2 o’clock pm”. The advertisement describes the property as “in Cecil County, whereof the late Cornelius Smith died to wit”. The property was adjoining the town of Port Deposit and contained one hundred and sixty acres where Mr. Smith resided for many years. It was also described as “one of the most desirable farms ever offered for sale in Cecil County”.

The advertisements in the Cecil Whig for Smith’s Grove school disappear after February 1851. Did the school close or change its name? Or, did it become so popular that there was no more room for students? Also, what happened to Mrs. Beach and Miss Turney? If any of our readers have any information to share, please contact the historical society at cecilhistory@gmail.com

The Historical Society of Cecil County remains closed at this time. We hope to reopen soon. We miss all of you!

This estate sale advertisement appeared in the Cecil Whig. Cornelius Smith died in 1858, and this ad seems to be for the property where the sc…