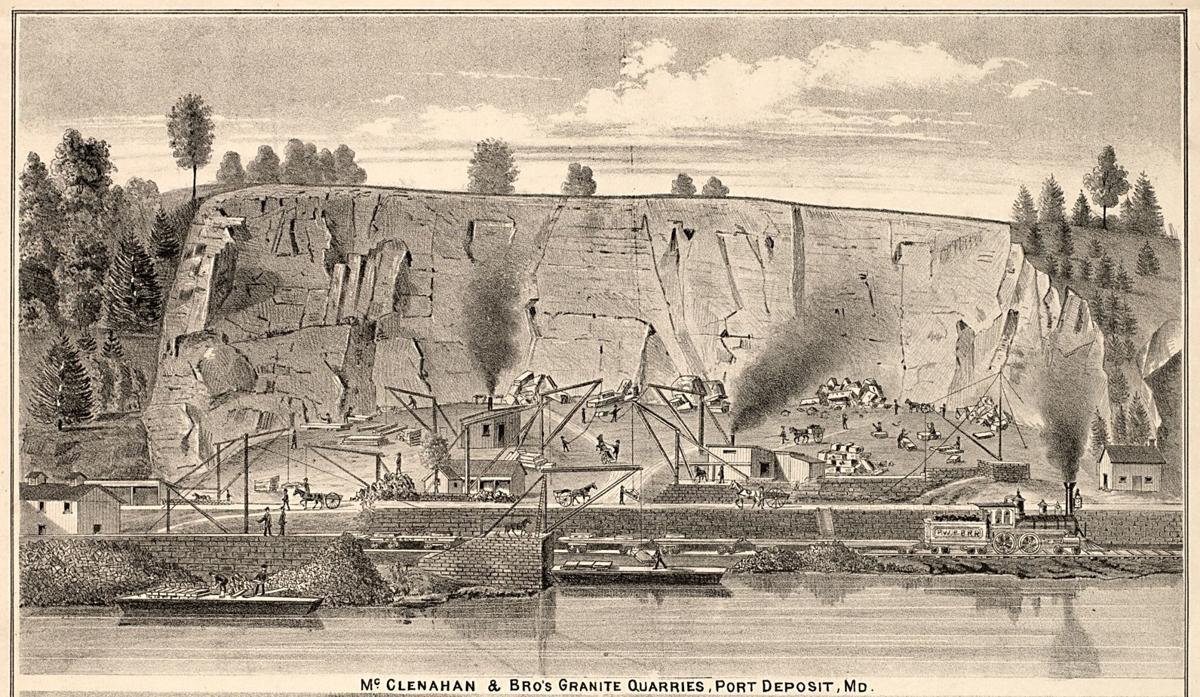 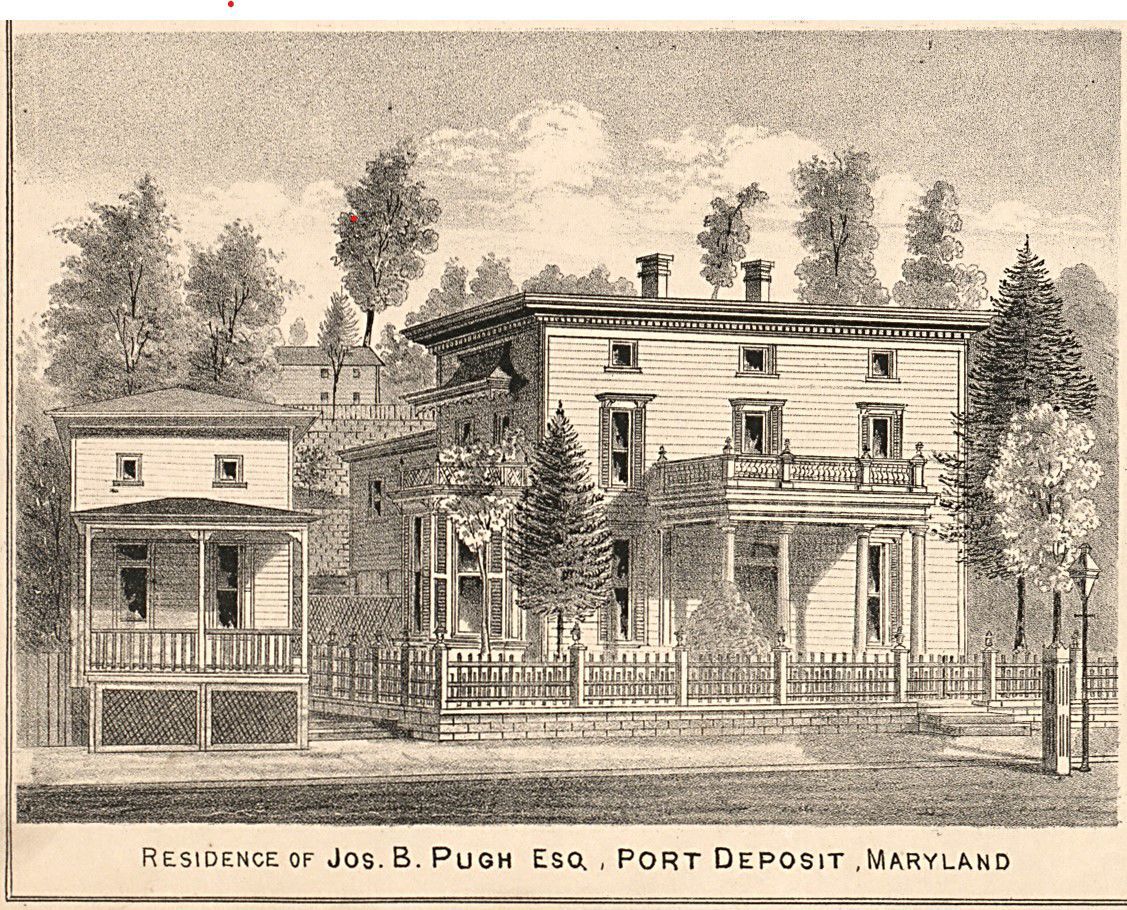 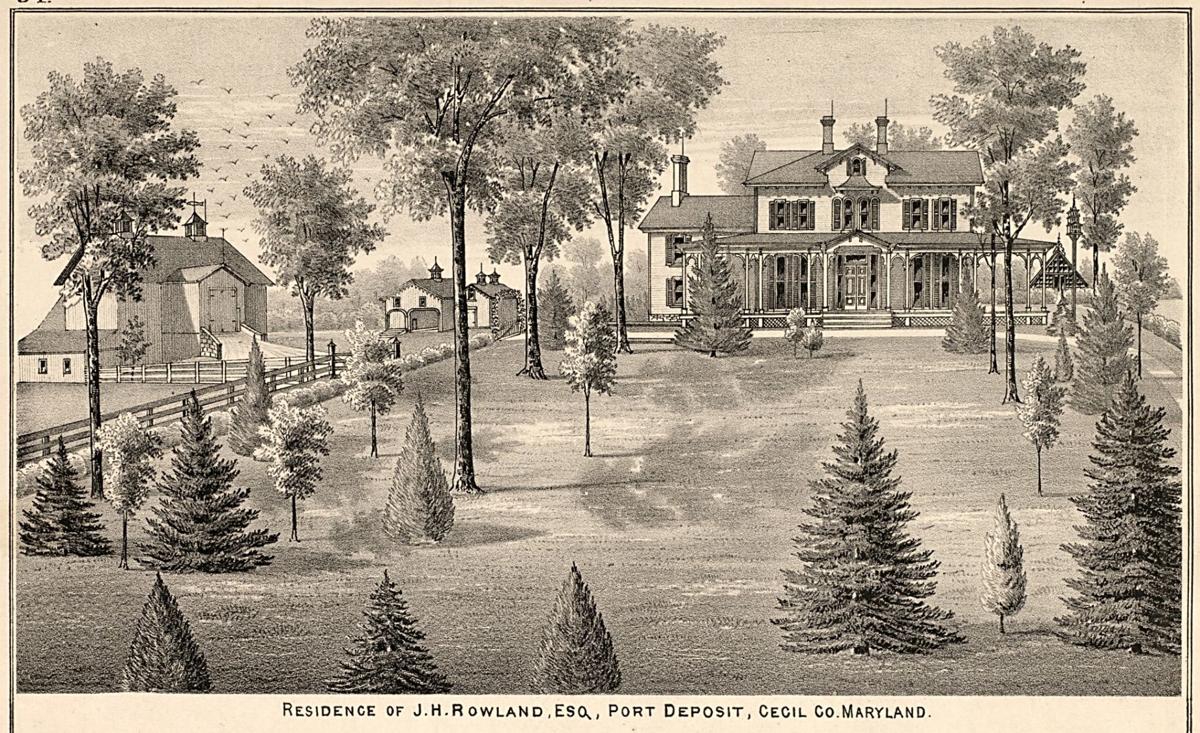 With the recent development in the area and the potential Granite Cliffs project being added to the town’s growth, this article from The Cecil Whig printed 25 June 1870 describes the town of Port Deposit before the Conowingo Dam was installed when trade and shipping were the primary businesses.

“Mr. A. S. Barber, editor of the Constitution, (N. J.) has been paying Port Deposit a visit, recently, and gives the following handsome sketch of the town, its trade and history:

Nestling low down at the mouth of the noble Susquehanna, just as it debouches into the Chesapeake, the town stretches along the shore of the river two and a half miles or more, with a precipitous bluff towering 150 to 200 feet above the wharves, whose sides clothed with verdure reveal inexhaustible quantities of granite. On the opposite shore, seven-eighths of a mile across are seen the grand old hills and vales of Harford, in all the beauty of their varigated verdure of forest and cultivated fields, dotted with farm-houses. During this, the rafting season, look when you may, a continuous stream of rafts of lumber, sometimes numerous flotillas of them together, are seen descending the river. And at night the shad fishermen bespangle its broad surface with their floating lights.

In our inquiries respecting the origin and business of the town, we have gathered the following facts and incidents, for the most of which we are indebted to the kindness of one of its old and most enterprising citizens. It may interest the readers of the Constitution to know a little more of this river town, where so large a portion of the lumber used in New Jersey is obtained. Port Deposit is situated at the mouth of the Susquehanna River, four and a half miles north of Havre de Grace. It is, and has been for the last fifty years, an immense lumber depot. Prior to 1837, all the iron, flour, grain, whisky, coal, &c., intended for market along the coast, was run down the Susquehanna in rafts, arks, and long boats, to this place, whence it was shipped on board of vessels to Baltimore, Philadelphia, New York, Boston, and to all the towns and cities on the Chesapeake Bay and its tributaries, as well as to Delaware Bay. Previous to the war of 1812 with Great Britain, the village was in its infancy. There were at that time not more than three houses on this shore. It was then generally known as Creswell’s Ferry, named after the owner and proprietor, Col. John Creswell, grandfather of the present Post Master General. At that time all the rafts, arks and boats, coming down the river, followed the natural courses of the current which led them to the opposite shore, to a place known as Bell’s Ferry—now Lapidum. All the transhipping was done at that place, although at that early day business men were attracted to this, the east side of the river, on account of there being deeper water and fewer rocks in the way. In 1783 there was a charter granted to a company to make a canal, called the Susquehanna Canal Company, from this point. Port Deposit, to the Pennsylvania State Line, with extraordinary privileges. Though the company was organized soon after, it was not until 1809 that the canal was so far constructed as to permit boats 10 feet wide to pass through it, thus avoiding many of the rapids and dangerous falls in this part of the river. This improvement drew the shipping trade to tills point, although the company could not put their canal in the order required to do the business, which was all descending trade. The ascending trade was worth nothing, the experiments with steam power to ascend all failing.

During the war in 1814, the enemy came up to Havre de Grace and burnt several buildings. They also came up to Bell’s Ferry, just opposite Port, where they burnt a warehouse. Our informant says, there was then a small mud fort at this place —the British intended to come ever to this side, but owing to a ruse practiced by an old gentleman by the name of Johnson, who was a good deal of a wag, they were dissuaded. lie rolled out a barrel of whisky, knocked out the head, and invited all the red coats to come and help themselves, and then told them not to go across the river to this place, as there was a sharp shooter behind every rock, who could pick a pigeon’s eye at 300 yards. And sure enough they didn’t come.

After the war it took some time to start the place. One of the greatest branches of business, pursued for years, was quarrying stone to build fortifications. Nearly all the stone used to build the Rip Raps at the mouth of James River, and the works at Fortress Monroe and Gosport Navy Yard, at Norfolk, were quarried from the side of these bluffs. This cutting away of the high bluffs and filling up the river in front, afforded some room for building. The town was incorporated about 1820, at which time a cart could not be driven down the river below where the Farmers and Commercial Hotel now stands, nearly central in the town. The only road ran up the hillside at the above point, out through the farms beyond. The quarrymen, in 1824, for their own convenience, made a pass along the shore as far down as the property of John P. Vanneman. In 1828 a law was passed and commissioners appointed to lay out a public highway along the river to Cully’s Run.

All the land lying south of the present Odd Fellows’ Hall, was claimed by Mrs. Sarah Thomas, at whose death the property was divided, and the hill-side down the river, 2,520 feet, was laid off in town lots of 40 feet front on both sides of the street; those on the river were truly water lots, being almost wholly covered by the river. Those on the hill-side were little more than a precipice. The lots lying above or north of the Hall were laid out 60 feet front, by Col. John Creswell, long before 1828. But in that year there were only three houses on the river side of the street, and not more than six on the east side of the street.

About this time the Susquehanna Canal had been put in good manageable order, and the locks enlarged so as to pass arks or rafts 16 feet wide and 90 feet long. The descending trade became so much increased that at times it would be filled with arks and rafts from one end to the other—eight miles—so that a person could walk on rafts or arks the whole way, except the locks. There were nine lift locks on the canal, six of them ten feet lift, and three of them eight feet lift, each, overcoming an ascent of 84 feet. In 1837-8 the Tide Water Canal on the west side of the river, having its outlet at Havre de Grace, was finished, and took away all the grain, flour, iron, and nearly every article that used to come down in arks ; and finally took the great bulk of the sawed timber. The demand, however, for timber in square logs for sawing purposes, increased so much to supply Philadelphia, New York, and the cities on the Chesapeake Bay, there is still a large quantity comes down the bed of the river, estimated at 70,000,000 feet, board measure ; and the sawed lumber, etc., now brought to this place in canal boats, is not less than 30,000,000. All this lumber finds a market, and is shipped from this place by railroad and by sailing vessels. In 1840 there was one steamboat which made two trips per week to and from this place. Now there is a daily boat to and from Baltimore, and a steamer also runs as a ferry-boat across to Lapidum.

The town, as we are informed, contains a population of 2,500 or 2,000. In the rafting season there are many strangers gathered here from all parts of the country. There are two very well kept hotels—one by Mrs. Smith, the other by Mr. Thompson, besides numerous boarding houses. The business is principally lumber and stone. A large steam saw mill, steam sash factory, foundries, the quarries, carpenter shops, and other mechanical operations give employment to a large number of workmen and laborers. The granite quarries are very extensive, and furnish the cities with some of the most beautiful stone used in their finest edifices. It is got out in immense blocks which are handled with great facility by means of cranes, and by the aid of a series of them, are safely landed on the railroad cars or on vessels in the river, whence they are transported far and wide. This is also a great shipping port for hay. It is put up in bales on the adjacent farms, and brought in on wagons. (comprising a set of long-coupled running gears, with two long pieces of timber, extending the whole length,) piled up three tiers high. There is no room for gardens here, and there are but a very few side yards. In two or three places, we noticed that the wealthy owners had terraced the almost perpendicular cliff’ butting up to their houses, and planted grape vines. Vegetables and other marketing are brought in from the country, or procured from Baltimore. There is a great deal of wealth here, and a very heavy capital invested in the trade above alluded to. Three or four persons have been named to us who count their millions, all with one exception made here in trade. There is a Bank, an Odd Fellows’ Hall, Presbyterian and Methodist Churches, a Catholic Chapel, etc. There are flourishing Lodges of Odd Fellows, Knights of Pythias and Good Templars, at Port. The two former, we have reason to know, honor and carry out the principles of their order; the stranger is not forgotten or neglected, and the sick are cared for. The Good Templars are strong and influential. Since their organization, we are informed, a very great reformation has taken place in the town, which was noted for its noisy drunken scenes in the beer houses and liquor saloons. Now a case of drunkenness is seldom seen, and order and quiet prevail.

A half hour’s ride with a friend gave us a good view of a line rolling agricultural district, highly cultivated and improved, lying up and back from the river, manifesting wealth, thrift and comfort.”

We are currently closed, due to the coronavirus, but once we reopen stop in and see us at the Historical Society of Cecil County on Main Street in Elkton to learn about this and many other topics. Access to the digital newspaper collection is free to members and is included in the $5 library fee for non-members.