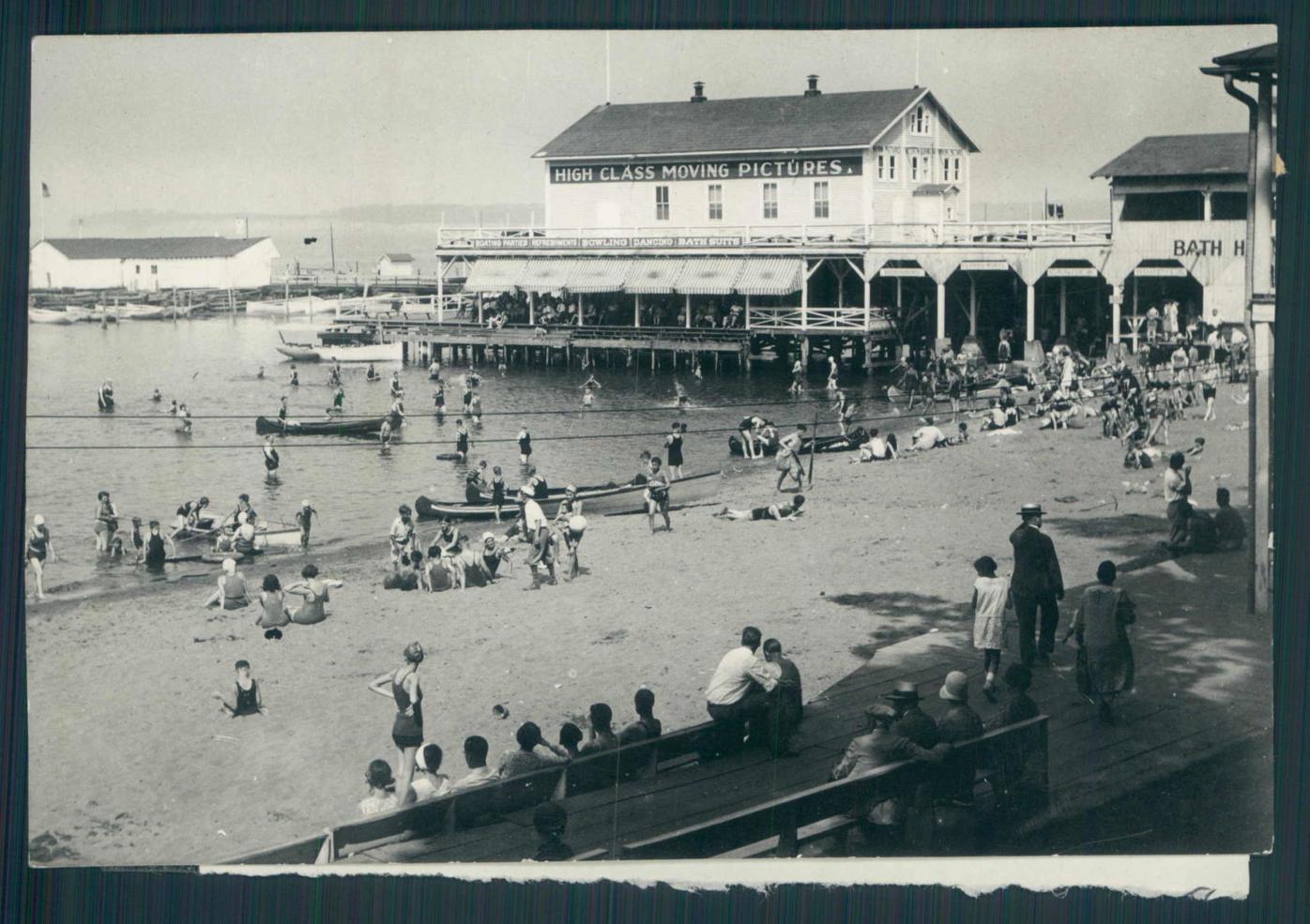 Sometime during the 1920s or 1930s (exact date unknown) Betterton Beach had a booming pier, which included dancing, a bowling alley, and a movie theater. 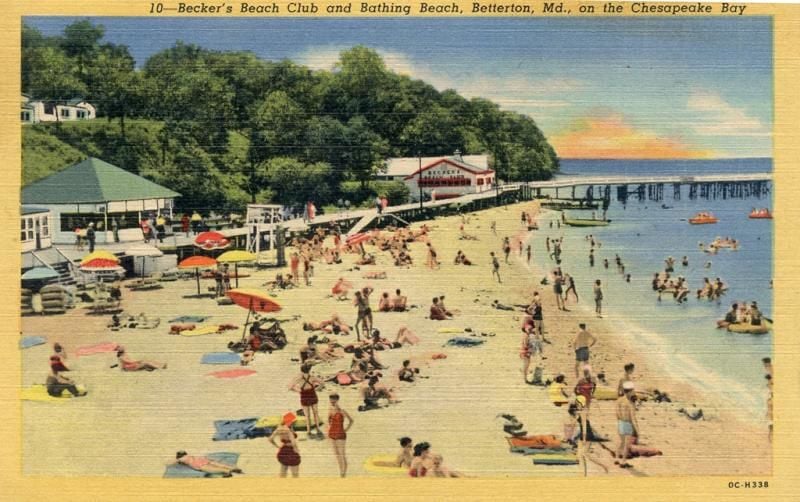 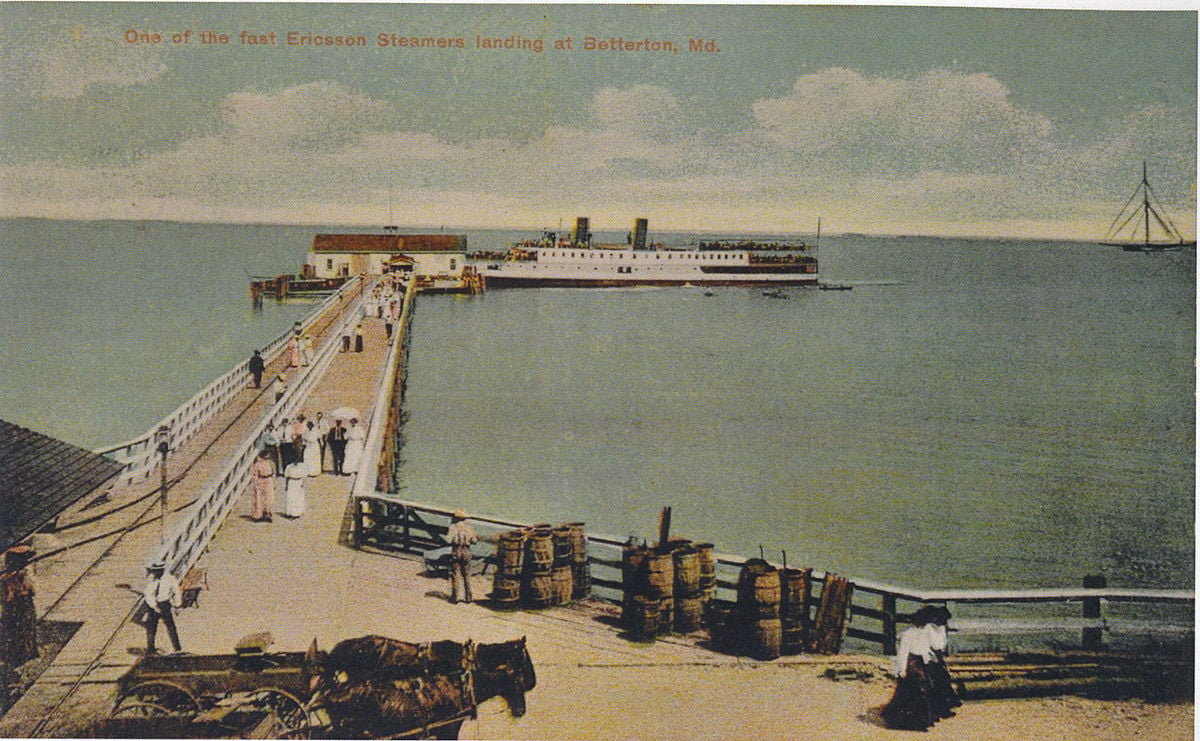 This postcard of an Ericsson steamship docked at Betterton pier pictures disembarking passengers during what appears to be the late 1800s. 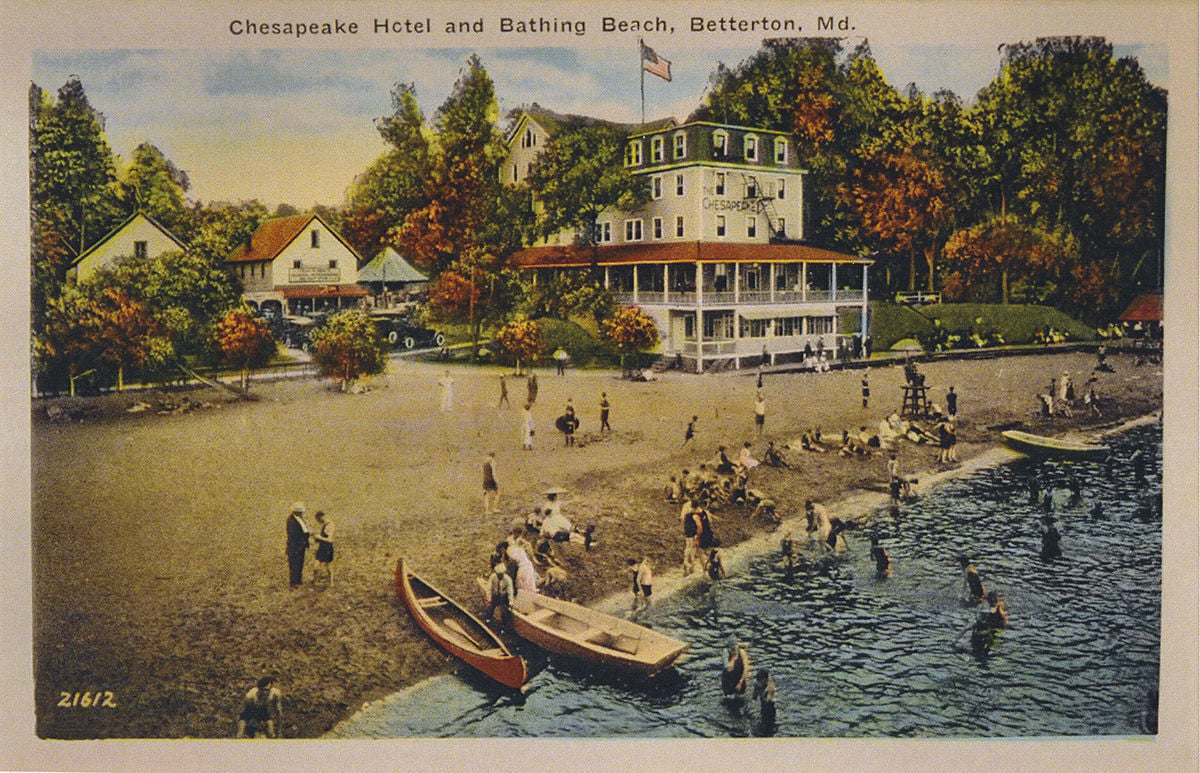 This postcard depicts the Chesapeake Hotel in Betterton from possibly sometime in the 1920s. The hotel was torn down in the 1980s in an effort to enhance the park and current beach. 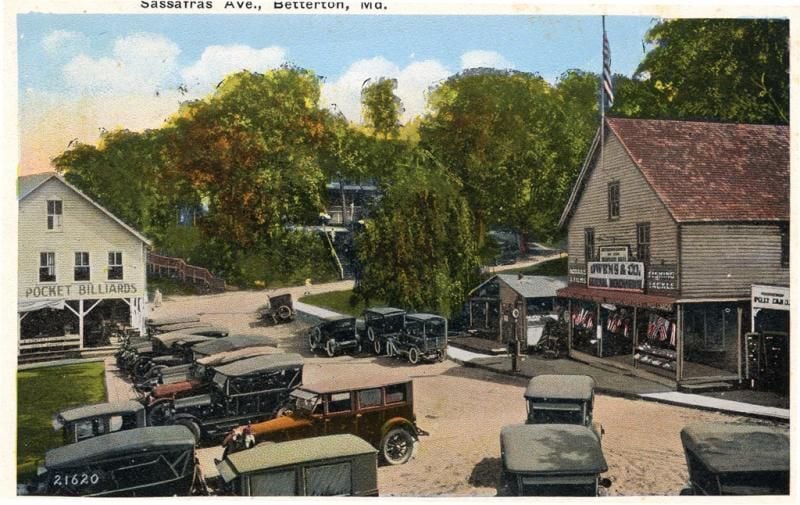 This postcard from the 1920s shows cars lined up on Sassafras Avenue (now Ericsson Avenue) in Betterton.

Sometime during the 1920s or 1930s (exact date unknown) Betterton Beach had a booming pier, which included dancing, a bowling alley, and a movie theater.

This postcard of an Ericsson steamship docked at Betterton pier pictures disembarking passengers during what appears to be the late 1800s.

This postcard depicts the Chesapeake Hotel in Betterton from possibly sometime in the 1920s. The hotel was torn down in the 1980s in an effort to enhance the park and current beach.

This postcard from the 1920s shows cars lined up on Sassafras Avenue (now Ericsson Avenue) in Betterton.

Cecil County – It’s no secret that Marylanders love their beaches. For most of us born and bred on the tidal waters of the Chesapeake Bay, we just can’t seem to get enough of the water. Every summer we make our way to Ocean City, the eastern most part of our Eastern Shore. Once there, we enjoy everything from sandy feet and saltwater taffy, to boardwalk fries and sunburn. Summer just wouldn’t be complete without our beloved beaches. But the beaches we know and love today were not always as accessible as they are now, and thus, were not always as popular. Before Ocean City became “the beach,” there were other smaller beaches along the shores of the Chesapeake Bay that were the summer destinations for thousands of Marylanders. One such beach was Betterton.

Located about 30 minutes south of Elkton, in neighboring Kent County, Betterton is a little community that sits just on the water’s edge, at the mouth of the Sassafras River where it empties into the Chesapeake Bay. From the beach you can easily identify Turkey Point to the northeast and Aberdeen Proving Ground to the northwest. Like so many of the Bay’s communities, Betterton began as a port and fishing village. The village began to thrive in the mid 1800’s, around the same time that it was given its name. Richard Townsend Turner (grandfather of Henry C. Turner, founder of the Turner Construction Company in Baltimore), a Quaker from Baltimore, purchased the land that is today known as Betterton. Turner fell in love with the rural seaside village, as well as a woman named Elizabeth Betterton, whose family was from the area. Turner married Elizabeth and named the village for her family. Prior to this the village was called Crews Landing and dates back to the late 1600’s.

Betterton’s attraction and popularity grew from the wives of local watermen, who prepared food and lodgings for boats coming into port, eventually leading to boarding houses and hotels being built to accommodate the increase of visitors. During the late 19th and early 20th centuries, Betterton was one of several very popular vacation destinations for Marylanders, especially the middle class families from Baltimore and parts north, including our very own Cecil County. Coming every summer by the thousands on the ever popular steamboats of the Chesapeake, vacationers from all over the state made Betterton quite the little beach resort. At one time, the town boasted having upwards of 18 hotels and boarding houses, a dance hall, a movie theater, casino, billiards, and a bowling alley. It also hosted multiple passenger steamboats each day that conveniently dropped vacationers off at the pier, which was just a short walk to their hotels. If you have been to present day Betterton, it is hard to imagine this all fitting into the tiny little town.

Cecil County newspapers, such as the Whig, Democrat, and Midland Journal were all raving about Betterton. There was a constant string of articles and advertisements promoting the little seaside town from the late 1800’s through the early part of the 20th century. Advertisements ran for hotels, dances, day trips, and even moonlit excursions. One such article, “A Trip to Betterton” from the Midland Journal (Rising Sun’s newspaper) dated August 20, 1897, gave an account of an excursion from Cecil County to Betterton. Forty citizens from Rising Sun left the town and “drove” (presumably horse drawn carriages) to Port Deposit, where they boarded a steamer called City Belle. The City Belle traveled down the mouth of the Susquehanna and into the head of the bay, arriving at Betterton two and half hours after leaving Port Deposit. The passengers disembarked and enjoyed a picnic lunch on shore. Later that evening, the City Belle made its way back to Port Deposit and returned all forty passengers home to Cecil County. The passengers were delighted and spoke highly of the day trip.

Sadly, like so many other Chesapeake Bay beaches, Betterton began to see a decline in tourism following the Depression. The steamboats of the Chesapeake, which once made numerous crossings each day and carried thousands of people, began to fade away. Over time, more and more people began to purchase their own automobiles and were able to drive themselves further distances and thus reducing travel by boat. The building of the Chesapeake Bay Bridge in 1952 was the final nail in the coffin for steamers, and thus little resort towns like Betterton. Linking the western shore to the eastern shore now made it very easy for people to travel by car to Ocean City and other larger beaches from places such as Annapolis and Baltimore. The last steamboat left Betterton’s docks for good in 1968 and Betterton was changed forever.

Although Betterton is no longer a booming beach resort, it is still popular among the locals and those few of us who have rediscovered it in recent years. All of the amenities and entertainment that once lined the beach are all gone and the town is almost unrecognizable compared to old photos of a once thriving resort. For some though, the small, peaceful little beach of Betterton is preferred to the overcrowded beaches of Ocean City and so, there will always be “vacationers” that come to the little beach resort that time forgot.