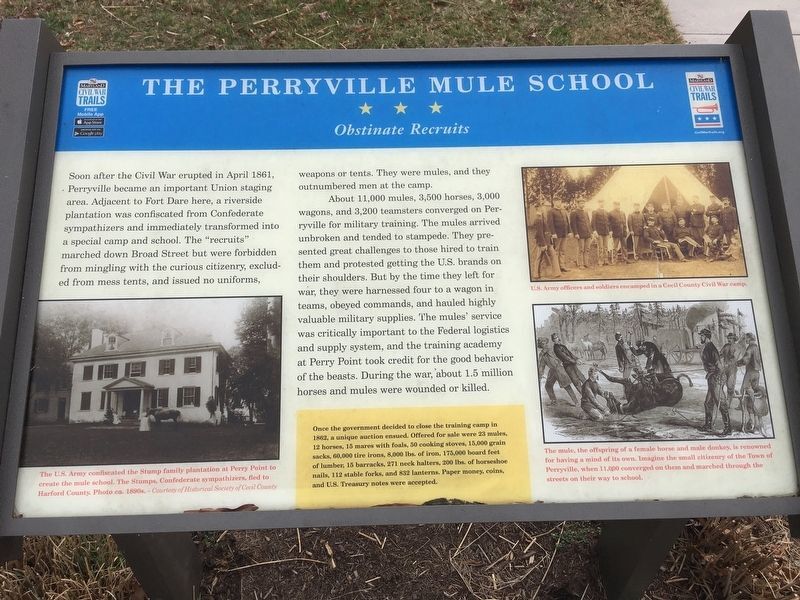 This sign, part of The Civil War Trails signage, tells visitors about the “Obstinate Recruits” at the mule school located at Perry Point. 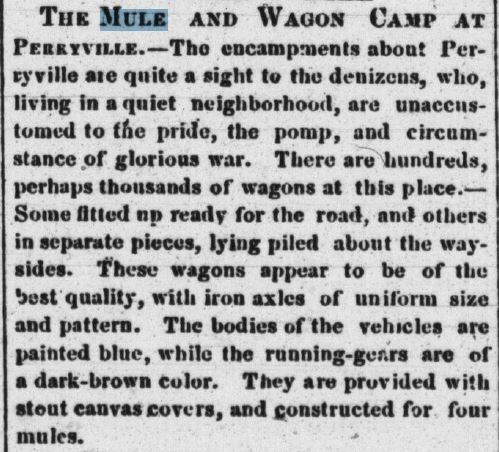 Cecil Whig mini-article about the arrival of the mule camp to Perryville.

This advertisement appeared in the June 7, 1862 edition of the Cecil Whig.

This sign, part of The Civil War Trails signage, tells visitors about the “Obstinate Recruits” at the mule school located at Perry Point.

Cecil Whig mini-article about the arrival of the mule camp to Perryville.

This advertisement appeared in the June 7, 1862 edition of the Cecil Whig.

This article originally appeared in the old Historical Society of Cecil County Bulletin. Jere Garrett is the author of Muffled Drums and Mustard Spoons, a book about the Civil War in Cecil County.

The population of Perryville mushroomed in 1861 when the government established a camp of instruction on the banks of the Susquehanna River. Just as quickly, it decreased the next year when the larger portion of the camp moved south to be closer to the action. The camp was situated on Perry Point, but the papers invariably referred to its location as Perryville.

Over 2,000 troops, many recruited from Pennsylvania, assembled at Col. Dare’s camp at Perryville in the spring of 1861. They were quartered in railroad buildings. Nobody crossed the line in either direction without Dare’s written permission. All supplies were plentiful – except uniforms. Among some companies, remarked the Whig, dress was as varied as the men themselves.

Perryville residents were ruffled by the activity that surrounded their town. The Whig crowed, “At present, it is the great mule school of the country.” There were hundreds of wagons in the neighborhood. Some were ready to roll, while others lay in pieces piled on the roadsides. Their iron axles were uniform in size and pattern. The wagon bodies were painted blue, and the running gears were dark brown. They were fitted with sturdy canvas covers and required a team of four mules.

As wagons were fitted up, they were pulled onto the perimeter o a plat of a couple of acres. Several hundred mules grazed within each of these “wheeled fences”. An estimated 1200 to 1500 mules were in such enclosures around Perryville. The Whig mentioned one minor problem: all the mules were green (unbroken) and presented somewhat of a challenge to the persons responsible for breaking them.

There were 25 wagons to a train, with four mules and a driver for each wagon. Every train had its own train master and assistant. A soon as the trains were ready, they moved out to make room for others Droves of mules, branded on the shoulder with “U.S.”, were constantly on the moves around Perryville.

Those local residents who were not pleased with the encampment in their neighborhood were no doubt disgruntled to read the Whig’s observation: “The camp, as yet, is only in a state of formation, and many more men and animals are expected to be placed on the ground in a short time.”

When the government first took over Perry Point, its owner, John Stump II was forced to leave his homestead. With his family he moved to Harford County. When they returned after the war, the Stumps found that Union soldiers had ripped the staircase out of their mansion and used it for firewood. The whole farm was in disrepair, but many of the former slaves stayed on voluntarily as hired hands. In time, the farming operation resumed.

In 1861, when 1600 troops of the 11th and 14th Regiments of US Infantry prepared to winter near Perryville, a Cecil Democrat correspondent reported on his visit to the encampment.

“The Government depot at Perryville is now the most important in the country. It contains 11,000 mules, 3,500 horses, 3,000 wagons, and 3,200 teamsters with quantities of hay, oats, and corn of not less value than one million five hundred thousand dollars. The total property cannot be less than five million dollars. These animals and articles are in charge of the 14th regiment of regulars, 800 strong, under command of Major Giddings, and part of the eleventh regiment of regulars, comprising 150 in all, including teamsters and soldiers, about 4,500 men. The tents are pitched on the brink of the Susquehanna River; sentries are posted on all the adjacent roads, and the most perfect military discipline prevails within the precincts of the camp. To guard the mules and horses is a most difficult duty. Notwithstanding all precautions, stampedes frequently occur and the animals are given to mortality. About 2 horses and 2 mules are dying every day. Uncle Sam has been pretty extensively swindled in the matter of these beasts. Major Van Vliet of the Quartermaster General’s Department, visited Perryville on Wednesday and witnessed the battalion drill of the 14th regiment. The latter is said to be one of the best Regiments in the service of the Government. Captain O’Connel is acting drill master.”

Breaking mules was an arduous task, but the animals had at least one advantage over horses where swampy terrain was involved. Mules were not susceptible to thrush, the foot disease that had disabled horses. The army leaned that on Burnside’s infamous “mad march.”

Cecil Countians took note in mid-November as a government mule train of 30 wagons passed through Elkton enroute from Perryville to Snow Hill, where it served as a transport for troops in that area.

Quartermaster Sauyelle advertised in 1862 for 200 teamsters. The pay was $25 a month, but only experienced drivers willing to go where ordered needed to apply. Recently some had refused to comply when ordered to join Burnside’s expedition.

Some merchants, of course, prospered from the increased traffic in the area, but other residents were understandably upset when the normal pace of their lives was changed by an influx of strangers.

Finally, the Government moved the wagons, ambulances and mules early in 1862. The Cecil Democrat reported on March 29 that while depots were established farther south to meet the needs of the moving army, the camp of instruction would remain in Perryville.

In spite of the man-made changes going on in and around the little town, some natural phenomena remained constant. The Cecil Whig reported a sure sign of spring in Perryville – 11,000 shad from different fisheries. They sold at ten and fifteen dollars per hundred.

Some residents breathed a sigh of relief when the mule school closed; nevertheless, their lives had changed profoundly and irrevocably.