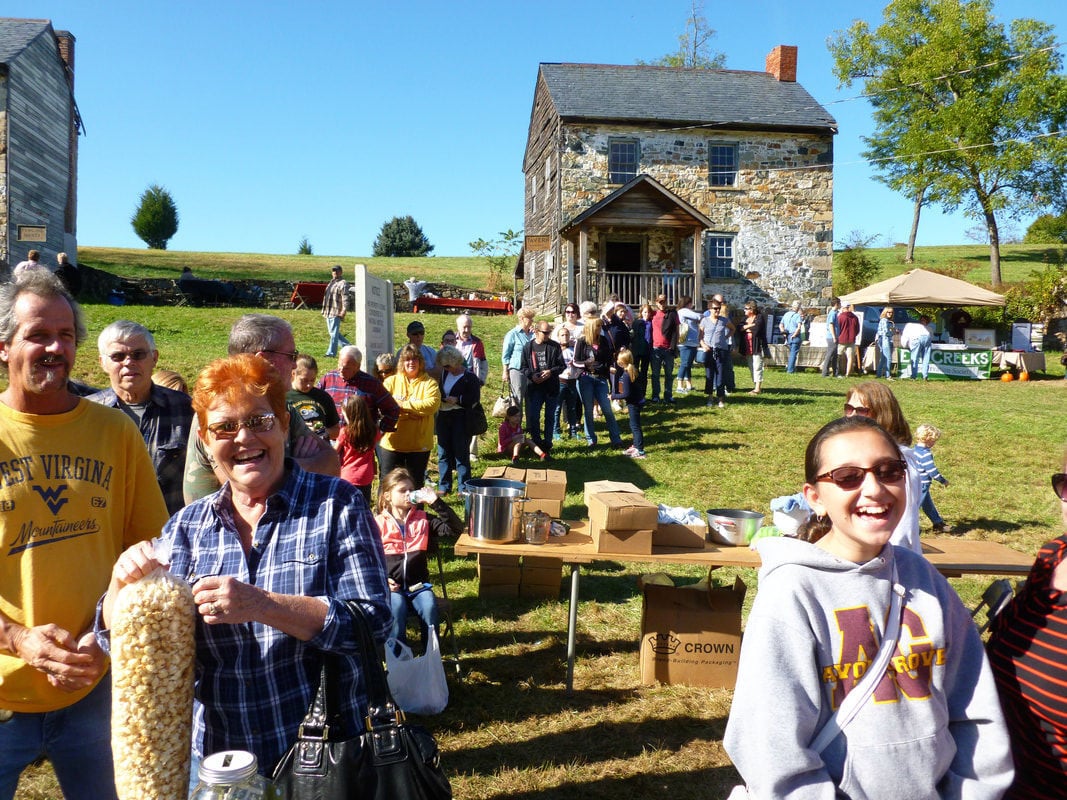 A very long line of patrons awaiting purchase of apple butter at a previous festival. 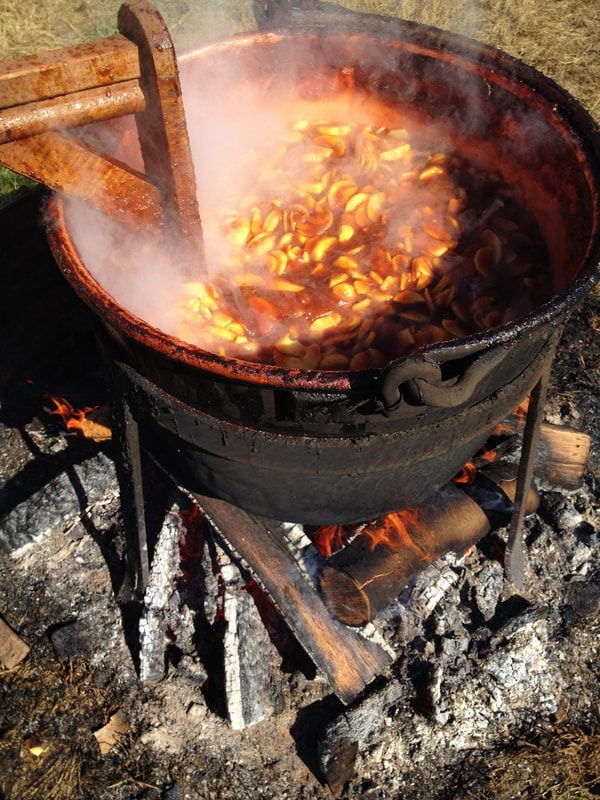 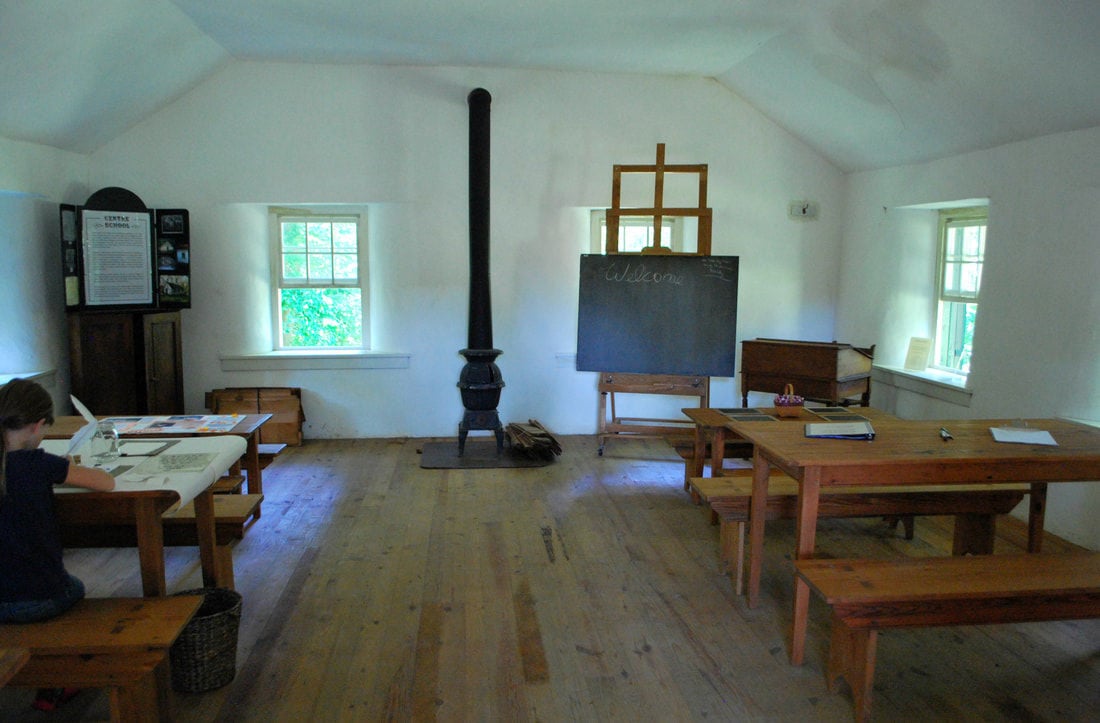 Amelia Martin sits at a desk inside of Centre School during one of ECPS’s open houses.

Left to Right: Joe Loomis, Rick Peterson, and the late Lee Hutton work on the Wallace Tavern, one of the three 17th century structures located at the site of The Bee Hive.

A very long line of patrons awaiting purchase of apple butter at a previous festival.

Amelia Martin sits at a desk inside of Centre School during one of ECPS’s open houses.

Left to Right: Joe Loomis, Rick Peterson, and the late Lee Hutton work on the Wallace Tavern, one of the three 17th century structures located at the site of The Bee Hive.

FAIR HILL – For many people, apple butter, with its deep brown color, unique sweetness, and hearty texture, represents the Autumn season better than any other food. Unlike pumpkin pie, its most notorious Autumn rival, apple butter is actually quite diverse. It can be paired with a number of foods and used in a variety of recipes. It can also be produced in large quantities and preserved and stored for long periods of time. It is for this reason that it was a staple amongst the Colonial Scots-Irish that settled the land known as Fair Hill and surrounding areas during the mid to late 17th century. From these immigrants, grew the tradition of apple butter making, which has stood the test of time and is still celebrated each year in our beloved Cecil County. After all, we don’t have a pumpkin pie festival… we have The Apple Butter Festival!

This October will mark 43 years since the very first Apple Butter Festival was held in 1977. This festival is obviously known for its apple butter, but many may not know its history and why it began.

The story of the Elk Creeks Preservation Society began in 1976, the year of our nation’s bicentennial celebration. George Reynolds and the late Richard “Tucker” Mackie, two of the society’s founding members were instrumental in starting the organization and subsequently the Apple Butter Festival, which followed the next year.

The original founding members of the society, came together, not only as a result of their heritage, but also from a mutual love of their local history. The Society’s purpose was to share their love of local history and to preserve, restore, and maintain the properties and historic structures of the Elk Creeks’ watershed.

The society is named for the sister creeks of the Big Elk and Little Elk that flow through the area and were at one time the heartbeat of this part of the county. It is Mr. Mackie’s family recipe that has been used over the past 43 years at every festival.

Since its beginning, ECPS has spearheaded a number of preservation and restoration projects. In recent years, at the site of The Bee Hive, ECPS has put extensive work into the Wallace Tavern, as well as restored the fireplaces in The Fence Maker’s House and the Cooper’s Shop.

The Society has also played a major role in the renovation of Centre School. Built in 1849, Centre School is the oldest standing schoolhouse in Cecil County. In 1993, ECPS helped to save the little schoolhouse by supplying funding towards its restoration. For the past decade, every September ECPS has organized and hosted the annual Centre School Open House in which members of the community are invited to tour the inside for a glimpse into the past. Unfortunately, due to COVID, this event was unable to take place this past month.

This is truly a sad year for ECPS, but despite having to cancel both events The Society is not taking the year off! This year, just like they have for the past 43 years, ECPS will still be making apple butter for sale. On a chilly October morning, in the wee hours before dawn, ECPS will gather at the site of The Bee Hive to light the fires under several large copper kettles. Each containing around two to three hundred pounds of apples and a variety of spices, these kettles will simmer for hours and must maintain continual stirring by volunteers, to prevent sticking and burning. The result of such time and dedication will eventually produce hundreds of jars of delicious apple butter ready to be enjoyed by our community.

ECPS hopes that everyone will enjoy their beloved apple butter just as much this year as in years past. Through their website, you can easily pre-order your apple butter, as well as other great merchandise and have it shipped, or prepared for pick-up. If you choose to pick up your orders in person, you may do so on October 10th any time between 9:00am – 4:00pm. Pick up will take place at The Bee Hive located at 3927 Telegraph Road Elkton, MD.

As a reminder, all proceeds from apple butter sales will go directly towards the continued maintenance and preservation of The Bee Hive so please consider purchasing some apple butter this year even though the traditional festival is unable to take place.

For more information on ECPS, it’s projects, and events, please visit their website at www.elkcreekspreservationsociety.com.