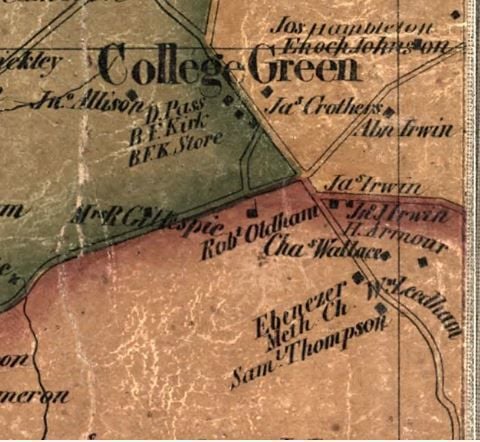 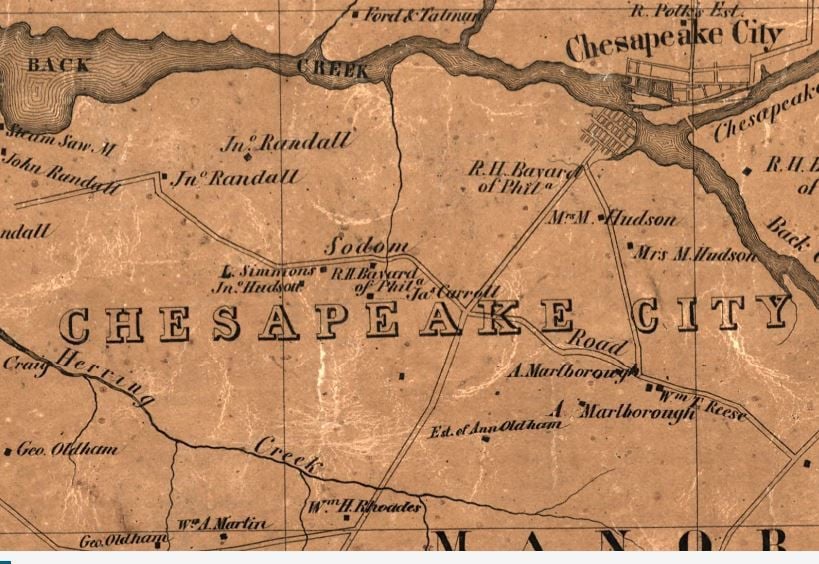 The following article appeared in the “Bulletin of the Historical Society of Cecil County” on October 19, 1964. It is interesting to note how many of these names have been lost to time, and how many remain. As Cecil County grew, established towns subsumed smaller surrounding villages. Take a look and see how many you recognize!

A perusal of the old newspapers of Cecil County reveals a number of place names which were in current usage at different times in the past, but are now obsolete or seldom heard. Following is a glossary of some early names set down for the benefit of posterity.

Brickleytown – Name by which Farmington was first known.

Church Point – Point at the head of the North East River where St. Mary Anne’s Church is located.

Court House Point – A projection on the east bank of the Elk River which was the site of the second county seat from 1719 to 1782 and terminal of the Elk Ferry.

Cromwell – Location of a post office established in 1852 on the road from Union Church to Warburton’s mill in the third district.

Dublin – A settlement on the Big Elk Creek near Strahorn’s mill, so called because all the residents were Irish people who worked in a woolen factory there.

Elk Forge – Site of forges on the Big Elk Creek where Elk Mills is now located. Manufacture of iron bar was commenced here in 1761 and continued for about 70 years

Ewingville – Area at the junction of route 473 (from Fairview) with route 273 between Blue Ball and Fair Hill.

Five Points – The intersection of five roads south of Oakwood in the 8th District.

Fox Chase – A tavern at Appleton known at different times as “Dysart’s” and “Seven Stars”.

Gravelly Hill – Primary name for Shelemiah, which became Bay View when a post office was opened there on Sept. 1, 1856

Hawkinsville – Name previously given to the settlement of Cokesbury between Perryville and Port Deposit.

Heckart-town – Settlement on the Susquehanna River about 1 ½ miles below Port Deposit.

Independence – Former name of Blythedale, also known as “Whitaker’s Mill” because of the grist mill operated by Edward Whitaker.

Jamestown – Site of the county’s first courthouse on the north bank of the Sassafras River east of Ordinary Point. It was built in 1692 and was used until March 1719.

Mexico – Neighborhood in the 8th District southeast of Oakwood where Bethesda M.P. Church was built in 1853.

Morgan’s Cross-roads – Earliest name for Cecilton, so called because James Morgan’s tavern was the first house built there.

New Kansas – An early name for Blake, also known as Fairview in the 4th District

New Mexico – Name by which the town of Oakwood was formerly known.

New Valley – An industrial community on Basin Run between Rowlandsville and Liberty Grove comprising a gristmill, sawmill, lumberyard, and a nailmill.

Oldtown – Name by which Pivot Bridge on the C & D Canal east of Chesapeake City.

Pedler’s Lane – This is now Earleville

Poplar Hill – Name of present village of Andora prior to March 1853 before residents agreed to change it.

Rileytown – A section taking its name from the Riley homestead one half mle east of Rock Springs in the 8th District.

Roach’s Cove – The 1785 name of a small bay on the North East River, subsequently call Garret, Carrot, and Cara Cove.

Rockdale – A post office opened in April 1864 at Park’s Rolling mill on the Big Elk Creek near Cowentown.

Savington – Name applied to Cecilton about 1882.

Sleepy Hollow – A tract between Battle Swamp and New Valley running westward, which was the home of the Indian chief Osceola, who called in “Indian’s Rest”.

Sodom – The area between Back Creek on the north and the road from Court House Point to St. Augustine.

Thompsontown – A tract of 400 acres taken up and patented in 1659 at Frenchtown on the Elk River.

Thorntown – Early name for the southern terminus of the ferry at the Bohemia River bridge.

Transtown – An early Swedish settlement at the confluence of the Big and Little Elk Creeks in the vicinity of Elk Landing.

Turkeytown — Name for the area midway between Barksdale and Appleton which became Cowantown when a post office was established there in June 1886.

Waterford – Name of hamlet on Route 213 at Perch Creek below Elkton, better known as “Bull Frog”.

Whig Island – A peninsula at Chesapeake City between Back Creek and the C & D Canal, so called because only members of the Whig party lived on it.

Wrightsville – A community on the Warwick-Cecilton road in the vicinity of Worsell Manor.