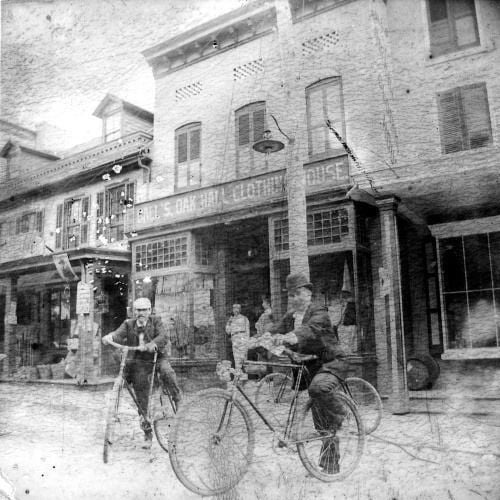 These unidentified gentlemen show off their bicycles on Elkton’s Main Street in the late 1890s. 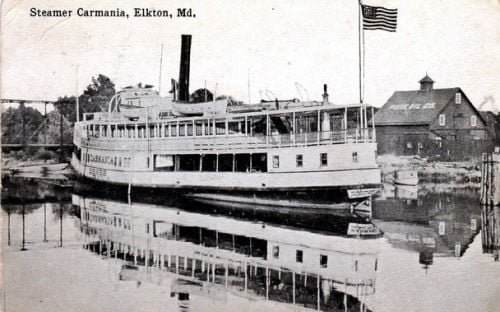 The Carmania docked in Elkton in the Elk River. 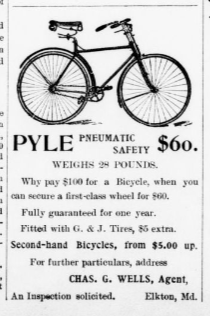 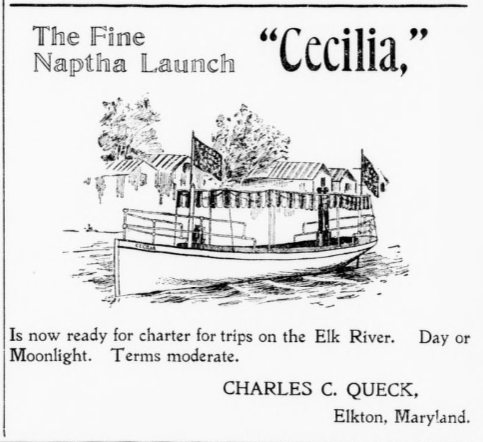 This advertisement for the “Cecilia” offered charter excursions on the Elk River. 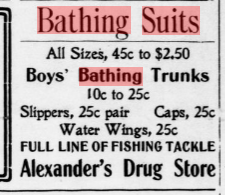 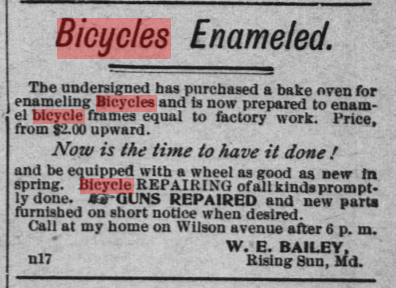 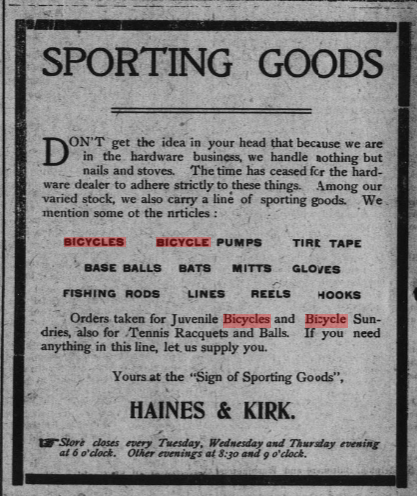 This sketch appeared in the Midland Journal’s “Timely Fashion Tips” column in 1910. 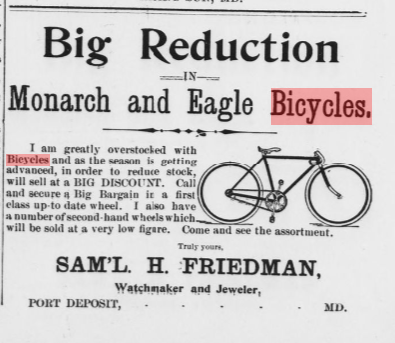 This advertisement from the Midland Journal of 1901 advertised a reduction in price for new bikes at Samuel H. Friedman’s store.

These unidentified gentlemen show off their bicycles on Elkton’s Main Street in the late 1890s.

The Carmania docked in Elkton in the Elk River.

This advertisement for the “Cecilia” offered charter excursions on the Elk River.

This sketch appeared in the Midland Journal’s “Timely Fashion Tips” column in 1910.

This advertisement from the Midland Journal of 1901 advertised a reduction in price for new bikes at Samuel H. Friedman’s store.

The thought of summer brings to mind swimming, baseball, fishing, and other outdoor activities. Cecil County even welcomes tourists who love our rivers and creeks for swimming, boating, and fishing. People of the 1890s and early 1900s enjoyed the same types of activities.

In the late 1890s, there seemed to be a team in every village and town in Cecil County. Teams mentioned in the Cecil Whig came from Elkton, Perryville, North East, Newark, Cherry Hill, Blue Ball, Appleton, and Avondale and played throughout the area. Many people spent summer evenings and weekend afternoons watching the local games. A junior league apparently existed as well. The June 1, 1895 issue of the Cecil Whig mentioned that the Junior Base Ball team of Elkton was defeated by the Junior North East team by the score of 20 – 11. They were preparing for a game with the Newark Club that coming week. The newspaper stories shared the scores of the games and often details from the games. For example, in June 1897, the Elkton Boatyard team played North East. The account of the game is as follows: “In the ninth inning, when the score stood at 21 – 18 in favor of North East, a dispute arose, when the game was given to Elkton by the umpire, according to the rules, by a score of 9 – 0. Such occurrences are to be regretted.” No mention of the offense that led to this was given!

While the first bicycles appeared in Cecil County during the 1860s, bicycling became popular in the late 1890s. Bicycling clubs sprung up all over the county. A June 1, 1895 Cecil Whig story described the newly formed Elkton Bicycle Club. Their first meeting was held at the office of Manly Drennen. John H. Terrell was elected president of the club and the vice president was W.S. Deibert. Secretary William H. Feehly and treasurer Harlan Wells rounded out the officers. The club chose orange and blue as their club colors. The May 29, 1897 Cecil Whig mentions a second club in Elkton, “The Royal Wheel Club”. This new club had taken a bicycle trip from Elkton to Glasgow that week. A Rising Sun club, the “Cecil Wheelmen” was formed in 1897. H. Linn Worthington was elected the club’s captain and president. J.A. Hartenstine was named the secretary and treasurer. In almost every summertime issue during that time period, individuals and their bicycling travels were mentioned. In the June 8, 1895 issue, it was reported that Miss Maggie Walls of Elkton had purchased a ladies’ Hartford bicycle and James A. Clark had bought a Pyle Wheel from H.G. Wells’ store. In 1897, Harry Biddle and Howard Ash rode their bicycles from Elkton to Cecilton one Saturday and spent Sunday with friends.

In the 1890s and early 1900s, advertisements for bicycles and bicycle repair appeared in the Cecil Whig and the Midland Journal. Charles G. Wells of Elkton offered the Pyle Pneumatic Safety bicycle for $60. It was guaranteed for one year and could be fitted with G & J tires for $5 extra. He also offered second0-hand bicycles, starting at $5. In 1900, W.E. Bailey of Wilson Avenue in Rising Sun offered bicycle repair and enameling. Haines & Kirk of Rising Sun advertised sporting goods of various kinds, including bicycles, bicycle pumps, and other “bicycle sundries” at their store. Samuel H. Friedman, Watchmaker and Jeweler, of Port Deposit offered Monarch and Eagle bicycles at a big reduction in price in the September 20, 1901 Midland Journal.

With five rivers in Cecil County, one of the most popular activities in the late 1890s was boating. The Cecil Whig reported on individual and group boating parties often. Yachting parties were all the rage in the 1890s. The June 15, 1895 Whig reported that Mr. and Mrs. George B. Kerfoot and O.R. Chayton gave pleasant yachting parties on their “pleasure crafts”. Frank Frazer gave a sailing party on his sailing skiff the “Ray”. The party landed at Herring Island for lunch, then continued down as far as the Bohemia River. Camping during these boating parties became popular. Ladies and gentlemen from Philadelphia came to Elkton to sail on the Elk River and camp on its banks, according to the June 26, 1897 Whig.

In the early 1900s, trips on steam boats became popular. Advertisements for these ships appeared in local papers. Owners of the Cecilia, a “Fine Naptha Launch”, advertised that the ship was ready for charter day or moonlight trips on the Elk River. Interested parties should contact Charles C. Queck. In 1916, the steamer Carmania came to Elkton. It offered excursions to Betterton, Chesapeake Haven, and Town Point. The advertisement proclaimed the Carmania a “Palatial Steamer” and offered special moonlight excursions and the best bathing, boating, and fishing.

Most of the swimming holes in the 1890s and early 1900s were creeks or rivers in Cecil County. Many articles in the Cecil Whig and the Midland Journal are accounts of swimming in the Elk and Susquehanna Rivers. The July 15, 1893 Cecil Whig contained a story about boys swimming in Farr Creek. This was against the town’s law, which prohibited swimming within town limits. “A growing number of boys have been going swimming near Farr Creek Bridge, behind the house of George Booth within town limits. They can plainly be seen from Main Street and they are advised to stop.”

What did the well-dressed swimmer wear? Men and boys wore swim trunks, but women and girls wore complete outfits that matched from head to toe. In June of 1896, the William B. Sharp Company advertised that they now had available “all-wool blue flannel bathing suits, all trimmed in white braid” for women. Men’s suits sold for $1.00, while women’s suits were $1.25. In the summer of 1902, Philadelphia’s John Wanamaker store took out full page advertisements in the Cecil Whig. On June 2, one section of the ad was devoted to bathing suits. The store offered bathing suits made of mohair, surf cloth, serge, flannel, sateen, and silk. “Mohair, as usual, is the favorite material – plain black or blue, or tiny pin-stripes of white.” Also available were bathing caps, slippers, waterwings, stockings, and rubber bathing corsets. Local merchants like Alexander’s Drug Store in Chesapeake City, advertised boys’ bathing trunks for ten cents to twenty-five cents, bathing accessories, and a full line of fishing tackle. The Midland Journal’s “Timely Fashion Tips” column included sketches of the latest in bathing suits and bathing bloomers in its July 10, 1908 edition.

Another team sport, tennis, was popular in the towns of Cecil County. Port Deposit’s team, the Country Tennis Club met at various homes to organize and practice their game. Col. Enoch Noyes hosted the club in June of 1896 and later met at the home of Samuel C. Rowland. The Elkton Tennis Club was anxiously awaiting the completion of their court on East Main Street in April of 1896. The grounds were expected to be very fine, since they had been “plowed and rolled hard”. Miss Laura Jamar was described as “the most expert of the lady players in the county”. The club was expecting teams from Oxford, Port Deposit, Zion, and Rising Sun to visit Elkton soon. The Pioneer Tennis Club of Rising Sun reorganized in May of 1897. Cecil E. Ewing was elected president and Dr. J.H. Jenness was elected vice-president. Miss Mary Worthington would serve as secretary and H.L. Worthington, treasurer. The Haines and Kirk store of Rising Sun advertised their tennis racquets and balls for sale in their sporting goods department.

All of the information for this article came from reading old issues of the Cecil Whig and the Midland Journal. These and many other old newspapers are available at www.chroniclingamerica.loc.gov. The historical society remains closed at this time. We hope to reopen soon.