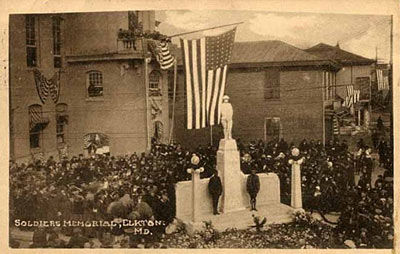 Unveiling of the Doughboy in front of the old courthouse on Main St. in 1921. 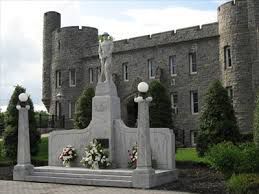 The Doughboy in front of the Armory; its home since 1941 when it was moved from Main St.

Unveiling of the Doughboy in front of the old courthouse on Main St. in 1921.

The Doughboy in front of the Armory; its home since 1941 when it was moved from Main St.

ELKTON — As some of you may have realized, this past Veteran’s Day (Nov. 11, 2019) marked the 101st anniversary of Armistice Day; the ending of WWI on Nov. 11, 1918. Additionally, this past Monday marked the 101st anniversary of the first meeting held in Cecil County to begin the planning of what would become our Doughboy Memorial. So, in light of this, it seemed only fitting that we revisit those events from just over a century ago that led to the creation of our very special Doughboy Memorial.

Following the end of World War I, many towns and cities across the United States (as well as other nations), established a variety of memorials in remembrance of the war and those who had served and fallen defending their countries. Maryland and Cecil County were no different. According to Cecil County historical archives, a meeting was held on Jan. 20, 1919 (just two months after the end of the war) to plan the creation of a monument to honor the men and women of Cecil County that had served and died in the war. A man and woman were chosen from each of the county’s nine districts to form an executive planning committee for the endeavor. Archives describe how ideas for a memorial were shared which included, a public library, a maternity annex to the hospital, a memorial tablet in the courthouse and the armory, a school fund for the soldiers, and of course a traditional monument of some kind. By March of that year the committee had still not come to a decision and it was decided that they should wait until all of the soldiers had returned home before they continued. It was not until November 1920, nearly two years after the end of the war, that the committee had come to a consensus and made final decisions about a memorial. The memorial would be a monument and it was to be built in the Southwest corner of the Elkton Courthouse. Robert Thackery and his wife Elizabeth helped to organize a fundraiser and the goal for donations was set for $7,500, but by January 1921, just two months after their announcement, they had already raised $5,218 so the committee decided to raise their goal to $10,000. By March, donations had nearly reached their goal and were at $9,400. Cecil County residents had come together once again to contribute just as they had done so a few years earlier. They were still “doing their bit.”

The Elkton Marble and Granite Company was contracted and tasked with erecting the monument and the Rutland Marble Company from Rutland Vermont was contracted to produce the actual monument. Ground was broken in front of the courthouse on June 6, 1921 and by that October it had been completed. The following month on Armistice Day (now known as Veterans Day), Nov. 11, 1921, the monument was officially dedicated. Cecil County residents gathered for a parade and the unveiling of the monument, which was done by the mothers of the fallen soldiers. The monument depicts a WWI soldier, in uniform, standing with his left knee bent and holding a rifle in front of him with the barrel of the gun upright and the base of the gun touching the ground. He stands tall on top of the central pedestal, with two flanking walls off to either side of him. The main inscription on the central pedestal reads, “This monument is erected by the people of Cecil County, in grateful recognition of the services of men and women of this country, who, on land or at sea, served their country, in the great World War – 1914-1918 – and in especial remembrance of the men of this county, who, in that war, “laid down their lives that others might live.” Additionally, there are two bronze plaques with inscriptions that were added later. The first reads, “Dedicated to those who made the supreme sacrifice in World War II.” The second reads, “And to veterans of all wars.” Seventeen men from Cecil County lost their lives in WWI and their names appear on the flanking walls off to either side of the soldier.

In 1941 the monument had to be relocated when a new courthouse was built resulting in the old one being torn down. Since that time, the monument has been located on the front lawn of the Maryland National Guard Armory on Railroad Avenue. The monument is often known and referred to as the Doughboy, which was an informal or slang term used to refer to a member of the United States Military, especially during WWI. It is one example of a variety of Doughboy sculptures that were mass-produced for communities all over the United States between the 1920s and 1930s in remembrance of WWI. In the state of Maryland, there are only seven known freestanding Doughboy monuments and our very own Cecil County Doughboy is one of them.