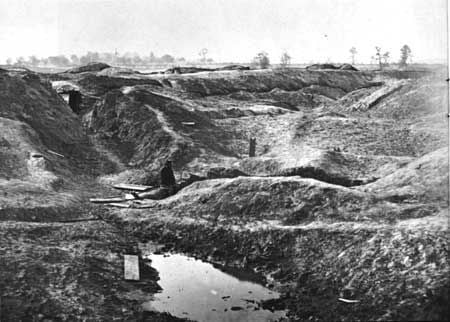 A National Archives photo of the aftermath of the Battle of the Crater.

Battle of the Crater 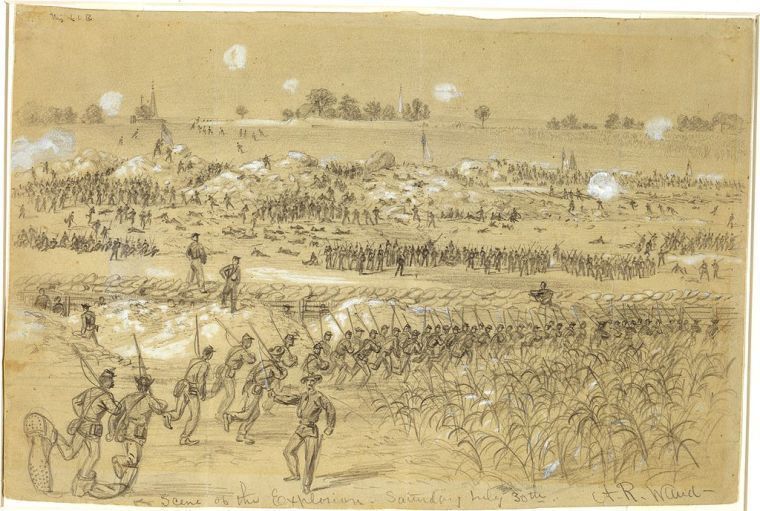 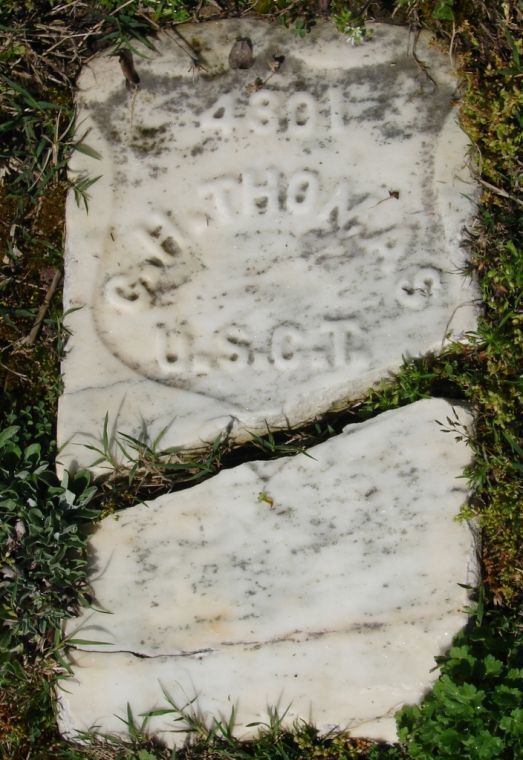 The gravestone for Pvt. Charles H.B. Thomas, a USCT soldier, is seen at the Poplar Grove National Cemetery in Virginia.

A National Archives photo of the aftermath of the Battle of the Crater.

Battle of the Crater

The gravestone for Pvt. Charles H.B. Thomas, a USCT soldier, is seen at the Poplar Grove National Cemetery in Virginia.

This article originally appeared in the Cecil Whig in July 2014.

The piedmont of Virginia can be a hot and humid place late in July. The sun beats down on anything not in the shade and the humidity clings to everything. Such was the weather report for the last week in July of 1864 at Petersburg, Virginia where 85 hundred Union and 61 hundred Confederate troops faced off in a grueling siege that could end only one way, death for hundreds of defenders and attackers alike. Among those Union forces were at least eight African Americans from Cecil County.

Two weeks earlier, the Union commander, General Ambrose Burnside, approved a proposal from some Pennsylvania coal miners that he and they thought might bring an end to the siege. Burnside proposed and his superiors agreed to the digging of a tunnel under the Confederate lines, loading it full of explosives, and blowing a hole in those lines, thus providing a gateway for Union forces to breech the stubborn defenses and take Petersburg.

While the miners dug, Burnside constructed the attack plan that called for the use of over four thousand fresh troops. Those troops would be members of the many United States Colored regiments that surrounded Petersburg. Their training began, but one day before the anticipated attack, General Meade, Burnside’s commander, vetoed the use of Black troops. According to the National Park Service report on the battle, Meade feared that “if the attack failed, the Union commanders could be accused of wanting to get rid of the only Negro troops then with the Army of the Potomac.” So, white troops, who were not nearly as rested or highly trained for the battle, were substituted. The result was predictable.

When the four tons of powder was ignited, and the resulting explosion sent earth, materials, and men into the air, the image was so impressive, so smoky, and the grounds so covered with debris, that it took several hours for the Union troops to begin their charge. By that time, the Confederates overcame the shock and began reforming their defensive lines. In addition, the inadequately trained Union troops, instead of going around the crater, ran headlong into it, causing a bottle neck for them and a shooting gallery for the Confederate defenders above them.

After the initial charge, Burnside ordered the Colored Troops into the fray, but it was too late. By noon, Burnside realized the battle was lost and issued an order to retreat from the crater. But what of the eight soldiers from Cecil County? Three were wounded and one was declared missing in action.

Wounded were Privates Jackson Jaynes of North East, Cyrus Wesley of Cedar Hill, and Joshua Ricketts. Private Wesley was wounded in the neck and hip by a mini ball. He spent the remainder of the war recovering in a military hospital. After the war he would settle in the Fair Hill area, purchase land, and farm it with his wife and 4 children. He’s buried in Cedar Hill Cemetery.

Private Jaynes returned to Cecil County and both purchased and farmed land in North East with his wife. They had no children. There is a record of Jaynes selling some of his land to provide right of way for a railroad line. Post war census records indicate Jaynes suffered from rheumatism late in life. He too is buried in Cedar Hill.

Very little is known about Private Ricketts either before or after the war. His military records indicate that he too was wounded at Petersburg on July 30th, 1864 and was hospitalized for over a year at Portsmouth, Virginia. The government owed him a $100 enlistment bounty.

The only known soldier killed in action from Cecil County among the United States Colored troops that fateful day in July, 150 years ago, is Private Charles H.B. Thomas. Like Private Ricketts, there are no pre-war public records about Thomas. However, the military records indicate only that he was first declared missing in action, then dead as of November, 1864.

In 1866, a “Burial Corp” consisting of 100 men was formed to retrieve the bodies buried on and around the Petersburg battlefield. It was during this process that the remains of Private Thomas were located, interred, and marked with a marble stone in what would become Poplar Grove National Cemetery, just outside of the city.

And so, we remember Privates Jaynes, Wesley, Ricketts, and Thomas for their service, their sacrifice, and their bravery. They put their lives on the line to preserve the Union and free the millions of men and women, who, like them, were African American freedom seekers, both north and south.