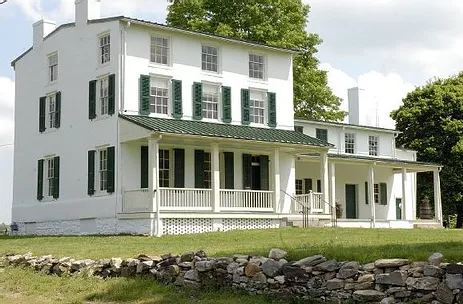 The rock wall at Elk Landing in Elkton.

The rock wall at Elk Landing in Elkton.

This weekend, I set out to turn over a new plot for a family garden. We enjoy planting vegetables, watermelons and even pumpkins for the fall. This plot is not very large, maybe 20 feet by 30 feet. I turned it over by hand and with a tiller. Every few feet, I would run into a small rock (thankfully only small ones!) and I could not help but think of this article from the March 25, 1871, edition of the Cecil Whig:

“There are two sides to most questions, and the question whether we shall bury or lift out the stones from our pastures is no exception to the general rule. Under certain circumstances it is admitted that the rock-lifters are the most economical. With Packer’s Machine, or a Rocklifter, three men and a team will take out in a day say one hundred rocks, weighing from two to six tons. It will take the same force, another day, to pack them away in a wall if it is handy. If you have to carry them a long distance and dump them into a swamp or pond-hole, it will take still longer. If a man has the fence fever strong upon him, and cannot see that twenty-acre fields are better than four, then let him lift stones and build the heavy walls. But some of us covet large fields; and we prize the bogs too highly for cranberries, to fill them up and make upland of them. We want the stones out of sight, and out of the way of the plow. We cannot sell the rocks, and we have too many fences already. To us burying is the cheapest method. A good workman will put one of these large stones out of sight in about an hour, and in the fall and winter, when labor is cheapest and the weather is fittest, the cost will be fifteen cents. He simply digs a hole with pick and spade or shovel, beside the stone, partially undermines it, and, with crow-bar, tips the rock in, calculating in his digging to leave the top of the rock two feet below the surface of the ground. One advantage of this method is that it raises the surface of the ground. In removing the rocks, as we have to with rock lifters, the grade is so much lowered that sometimes new rocks unseen before are brought to the surface, and a second crop has to be pulled before we can give a clean sweep to the plow. In burying, we raise the grade so as to avoid this necessity. Much less of the subsoil is brought to the surface by this process than by the other. The stones and gravel are put in a pile on one side of the rock, and the surface soil in another pile. When the rock is dumped into the hole, the small stones are packed around the edges, and the subsoil and gravel tilled in next, and the surface soil last. This treatment operates a good deal like subsoiling and underdraining combined. There is drainage all around the sides of the buried rock; the subsoil and surface soil are thoroughly loosened and sufficiently mingled, and the soil is put in the best mechanical condition for crops. The good effects upon the soil are visible for many years after the operation. Manure tells best over these sunken rocks, and the grass and other crops are largest. We do not mean to depreciate the value of the rock-lifters. We need all of them, and more. But there are circumstances where burying is the cheaper way of clearing rocky pastures and meadows. – American Agriculturist”

When I first came across this article, it struck me because I had never heard of this rock burying technique before. It seems to make sense for very large fields, but just seemed odd to me. I was raised in the Northeast and there rocks are brought to the side of the field or property and made into a wall, period, end-of-story. I have a very distinct (all be it obscure!) memory of my grandmother and grandfather pointing out walls while driving around as examples of why Connecticut has the best rock walls in the United States.

Connecticut, as well as many of the other Northeast states, have a large amount of granite mixed in with its topsoil, which is mostly not the case here in Maryland. As the forests were cleared in Connecticut earlier in the 19th century and even contemporaneously with the featured Whig article, the rock piles and walls were being formed. A century later when I would see them many would be polished Laid Walls or hearty Double Walls, but even the ones formed by just dumping the stones on the edge of the fields were still around for me to explore; cared for or not.

I looked around to see if the rock burying technique was typically used in Maryland around this period but found no clear evidence that this was the case. For the record, I dutifully carried the stones I tilled last weekend to the edge of my yard to start my own stone wall.