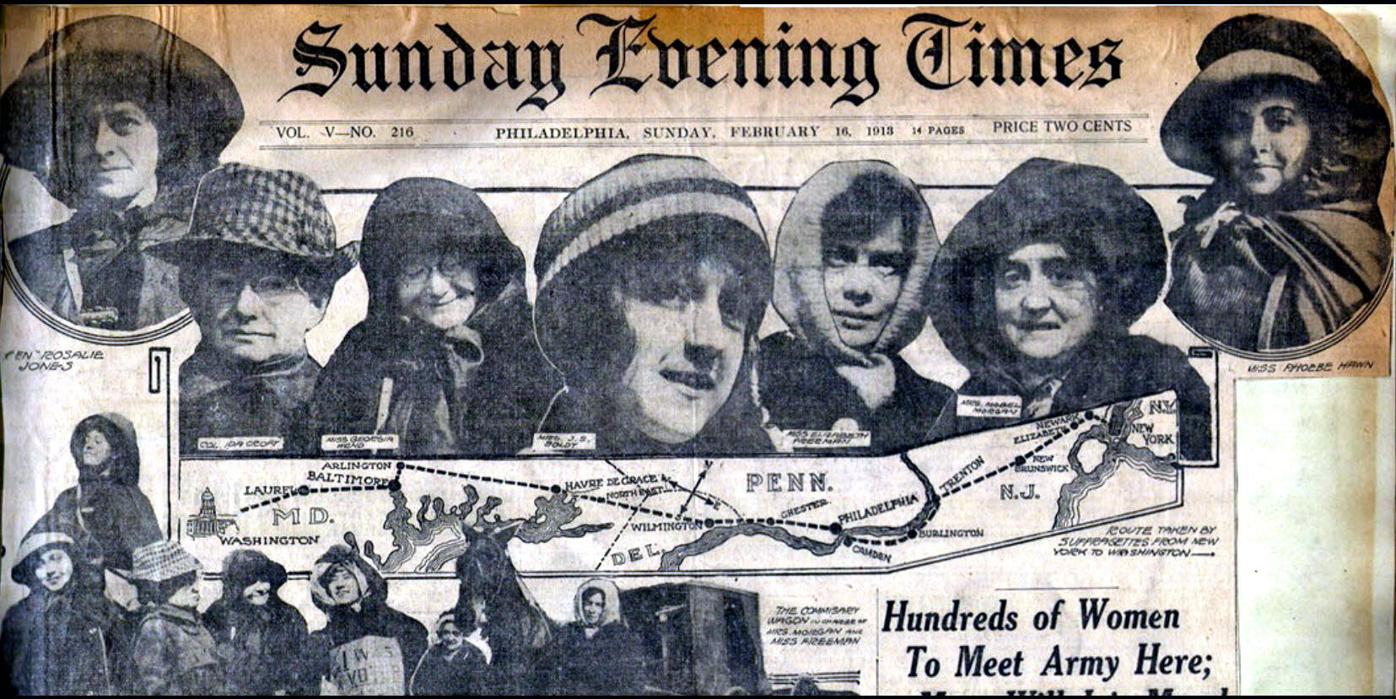 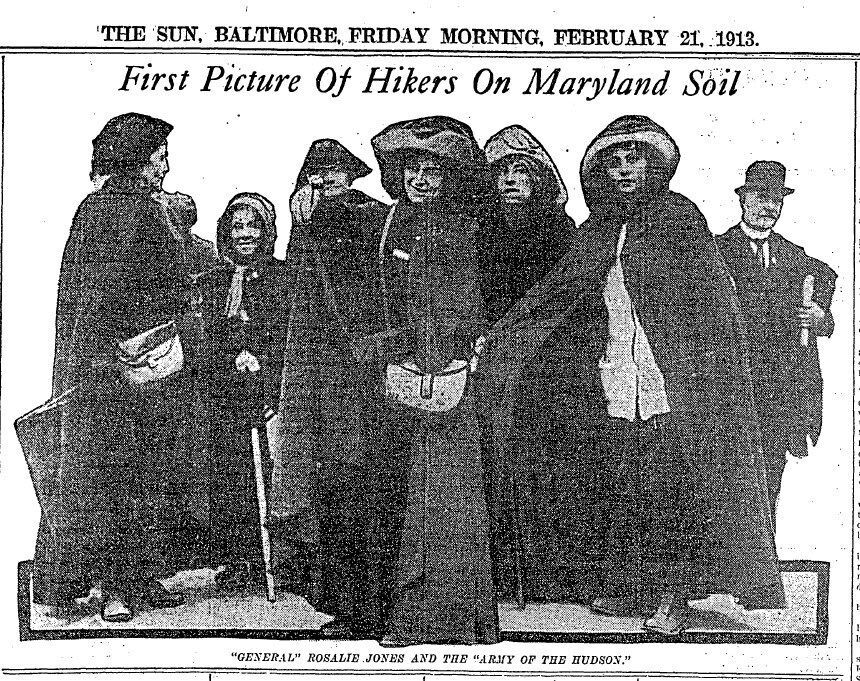 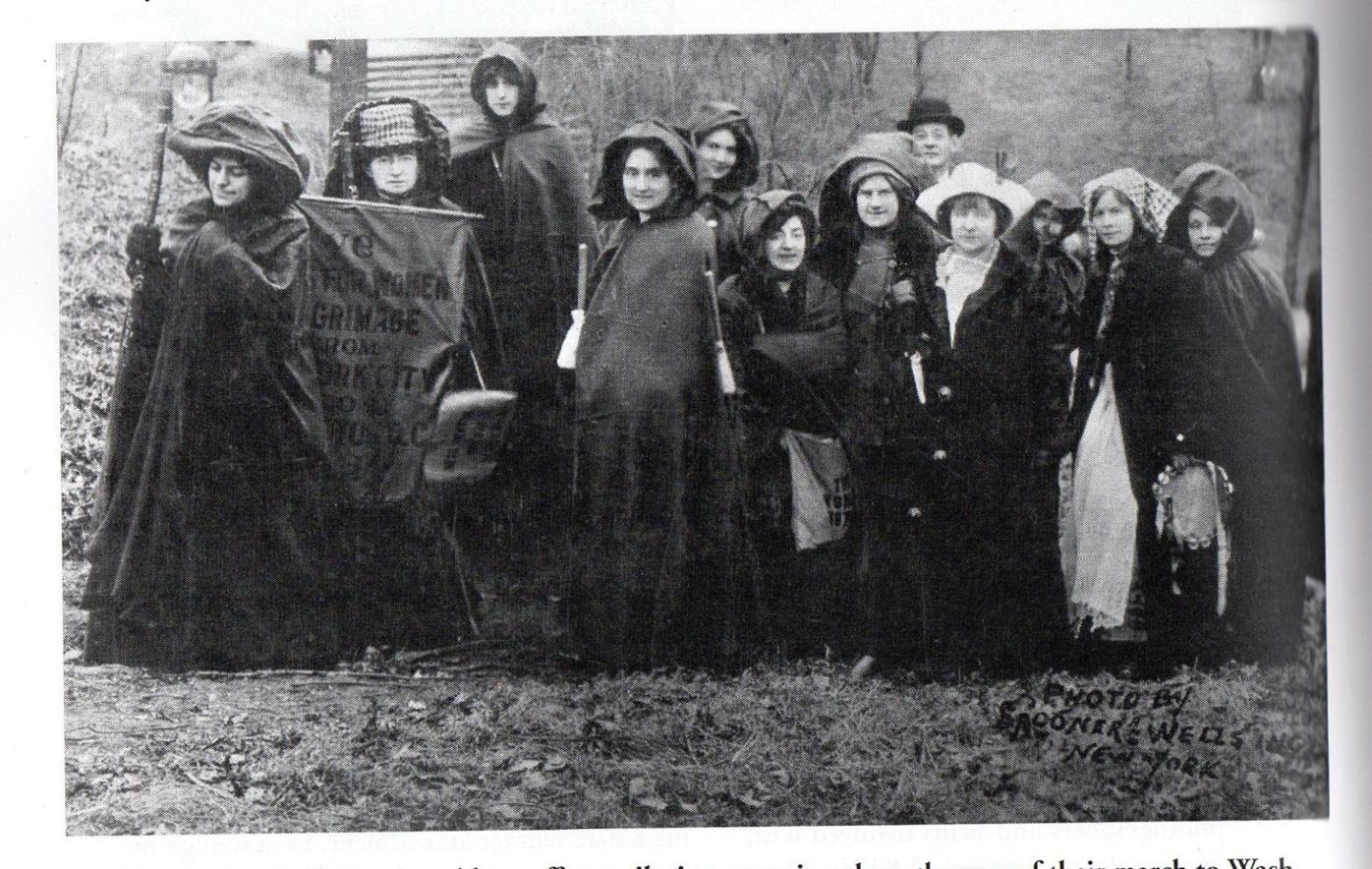 General Rosalie Jones and her suffrage pilgrims stopping along the way on their march to Washington.

General Rosalie Jones and her suffrage pilgrims stopping along the way on their march to Washington.

Q: I’m researching the women’s suffrage march from New York to Washington, D.C., in 1913. Do you have any information on the marchers in Cecil County

A: After a long struggle to give women the right to vote, things were heating up in 1913, and a rally was called for in Washington, D.C., on March 3, 1913, the day before President Woodrow Wilson’s inauguration. As the day for this gathering neared, suffragists advanced on the city from every direction. On February 20, 1913, General Rosalie G. Jones and her suffrage army crossed the Mason Dixon Line at Iron Hill, having started in New York. Taylor W. McKenney of Elkton met the advance guard at the state line, offering them a ride to town in his automobile. As the ladies trudged on, they marched to the strains of “the suffragette is at the door, Maryland, My Maryland.” That evening, they held a public meeting at the Mechanics Hall. They also went looking for William T. Warburton, Republican floor leader of the House of Delegates, who defeated a Maryland suffrage bill. He was nowhere to be found while the ladies were in town.

All General Jones desired was “a little argument with Mr. Warburton, but he was “a shy man,” the Baltimore Sun reported. After an overnight stay at the Howard Hotel, the campaign moved on to North East. At the Hotel Cecil, the party of 40 women rested for lunch. Continuing on, they trooped through Charlestown. There, “Bayard Black mounted his gramophone on the front porch. As General Jones appeared, Mr. Black started the record, “Maryland My Maryland.”

At Principio Furnace, there was waving of yellow banners, and the men left their work, coming out to the roadside to greet the ladies. At Perryville, the Bayside Brass Band met them, and a large crowd escorted the hikers across the bridge, where about half of Havre de Grace waited for the group’s arrival. Completely “tired out and footsore,” they gave “their endorsement to the general verdict that the worst piece of public road in the United States was between Perryville and Elkton,” the Havre de Grace Record noted. Back in Elkton, the Cecil Democrat wondered that if this “little band of women walkers” could create so much excitement, interest, and enthusiasm, what would happen in political circles when that number of women was multiplied by several million, once they got the vote? That was probably the question on the minds of politicians, too.