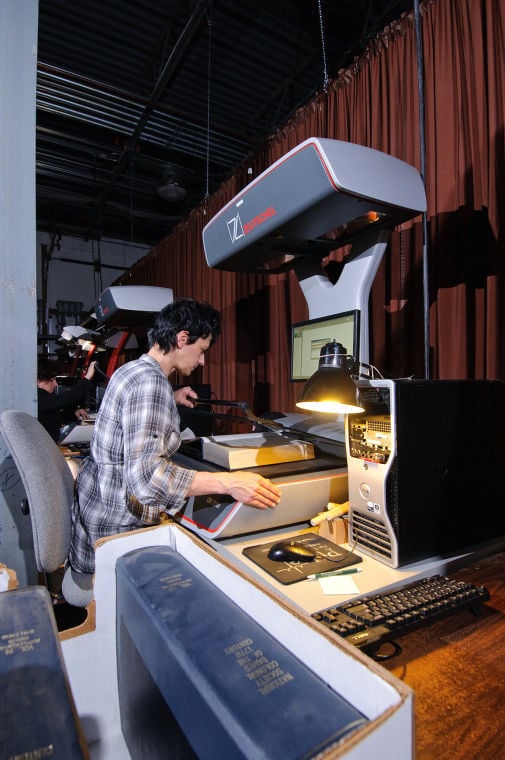 Technicians will scan the pages of archived newspapers and return them to the society on CDs. 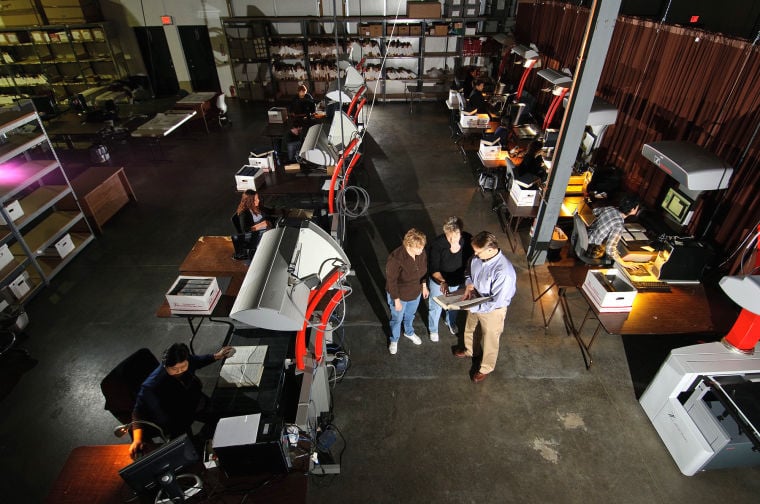 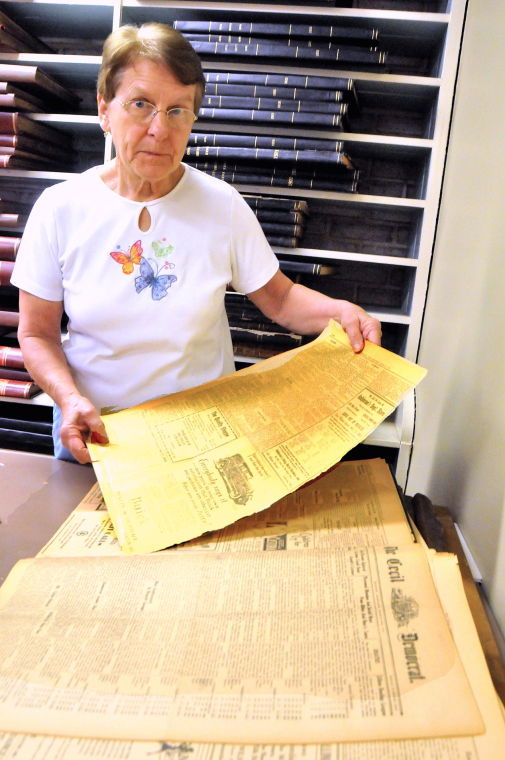 Genealogist Darlene McCall holds a fragile copy of the Cecil Democrat from the 1930s that will be scanned. 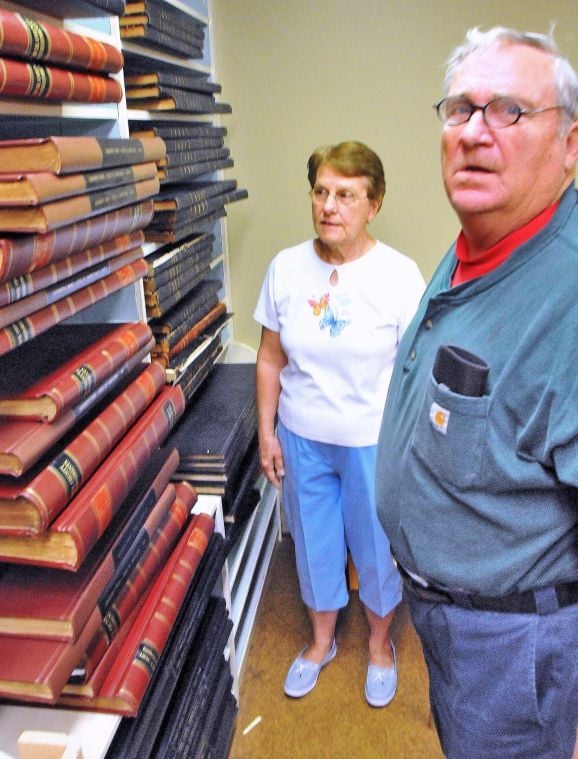 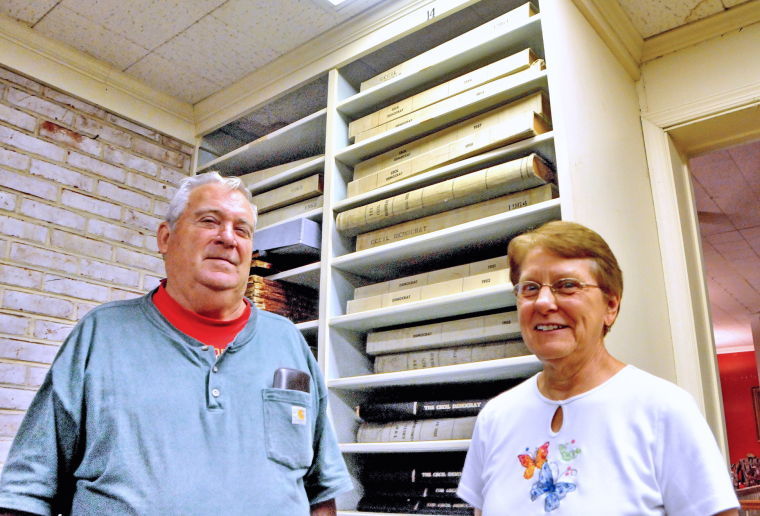 Historical society members Bob McKinney and Darlene McCall examine some of the 40 newspaper titles published in the county. 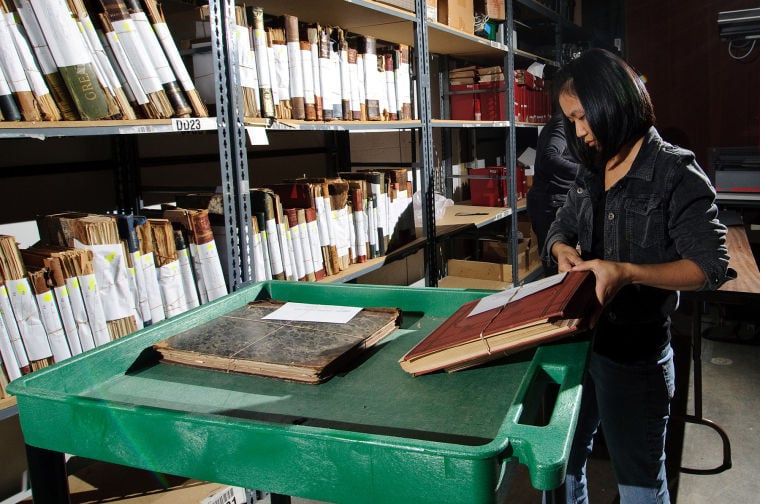 Newspaper scanning technicians work with care to retain the image of the original newspapers. 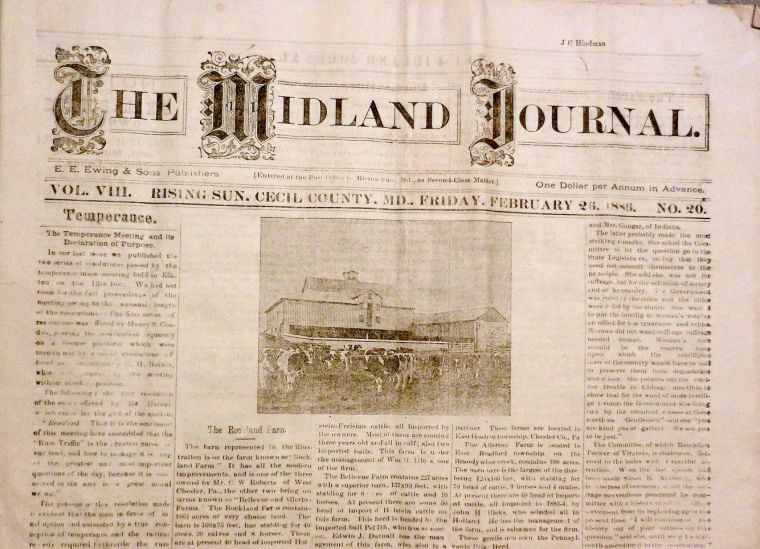 The Midland Journal was a Rising Sun newspaper printed in the early 20th century.

Technicians will scan the pages of archived newspapers and return them to the society on CDs.

Genealogist Darlene McCall holds a fragile copy of the Cecil Democrat from the 1930s that will be scanned.

Historical society members Bob McKinney and Darlene McCall examine some of the 40 newspaper titles published in the county.

Newspaper scanning technicians work with care to retain the image of the original newspapers.

The Midland Journal was a Rising Sun newspaper printed in the early 20th century.

ELKTON — One of the most popular and accessible collections owned by the Historical Society of Cecil County is our newspapers.

In fact, the historical society is the largest repository of Cecil County newspapers anywhere. Why are they so popular? Because newspapers are valuable research tools as primary documents for every kind of research from advertising to genealogy and from social history to military history. They are a treasure trove of information as snapshots of life in any given week or day in any given year.

The society’s collection can be accessed in two ways: either by reviewing the original newspapers or via microfilm. However, all of that is about to change as part of the society’s newspaper collection enters the electronic age, according to Society President Paula Newton.

Thanks to many generous donations from several of our members, the historical society signed a contract with the Crowley Company, an imaging services company, of Frederick, to take the microfilm reels containing the Elkton Press (1823-29), Perryville Record (1893-1904), and nine bound volumes of the Cecil Democrat to electronically scan them, place those scans on CDs, and return those CDs to the society. Unlike microfilm, these CDs require no special equipment to view them. They can be read on any computer with a CD drive.

Historical society board member Mike Dixon said that the Elkton Press and Perryville Record were chosen for scanning because the collections are relatively small, and because donors specifically requested these newspapers be scanned.

Dixon explained that The Cecil Democrat was chosen for another reason.

“The Democrat was selected because those old pages are rapidly deteriorating and won’t be with us many more decades,” he said. “They are in the most fragile condition.”

There were over 40 different newspapers published in the county over the centuries he noted. Dixon said that increased use played a major role in the decision to begin scanning our newspaper collection.

“An added stress now is that they are getting handled more than ever, because the use of the microfilming is so much more time consuming,” he said.

However, even with this initial scan, Dixon said that the society is not leaving microfilm behind in the dust of time just yet.

“We have many years to go in the microfilm business, as far as that question is concerned,” he said. “I don’t think anyone is able to even estimate when we’ll be out of that business, unless we land some really large grant.”

Speaking of grants, as noted earlier, this $4,000 project could not have been undertaken without the generous contributions of several donors all of whom will be recognized and thanked when we unveil the completed scans.

While the scanning of the microfilm is relatively easy, Crowley Company spokesperson Meghan Wyatt said that scanning the bound newspapers is delicate work.

“They are much more fragile than we expected; the pages are brittle and flaking in many cases and will basically crumble by the simple act of turning the pages,” she said.

So, Wyatt said that technicians will use the utmost care.

“Materials are scanned by a scanning technician in a manual process, in which the operator turns each page, scanning as they go,” she said. “The left and right sides are captured in one pass, and then the integrated software crops out the pages so that they are delivered as single page images. Crowley will notify the historical society if any of the material appears too stressed or fragile to scan without causing further damage, and will wait for their feedback and suggestions before proceeding.”

After that, the electronic magic begins.

“We’ll deliver via external hard drive to client — it will be one multipage searchable file per newspaper issue named by the (year, month, and date) of publication,“ Wyatt said.

Once the scanning is complete and the new electronic versions are returned along with the bound newspapers and the rolls of microfilm, Newton said that the society will have an official unveiling.