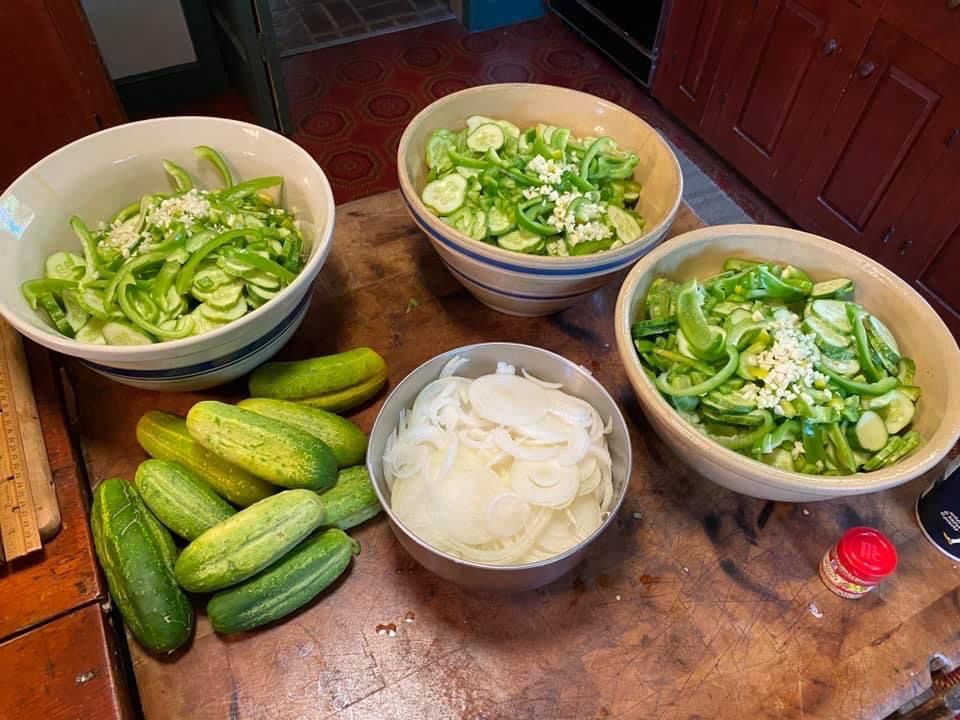 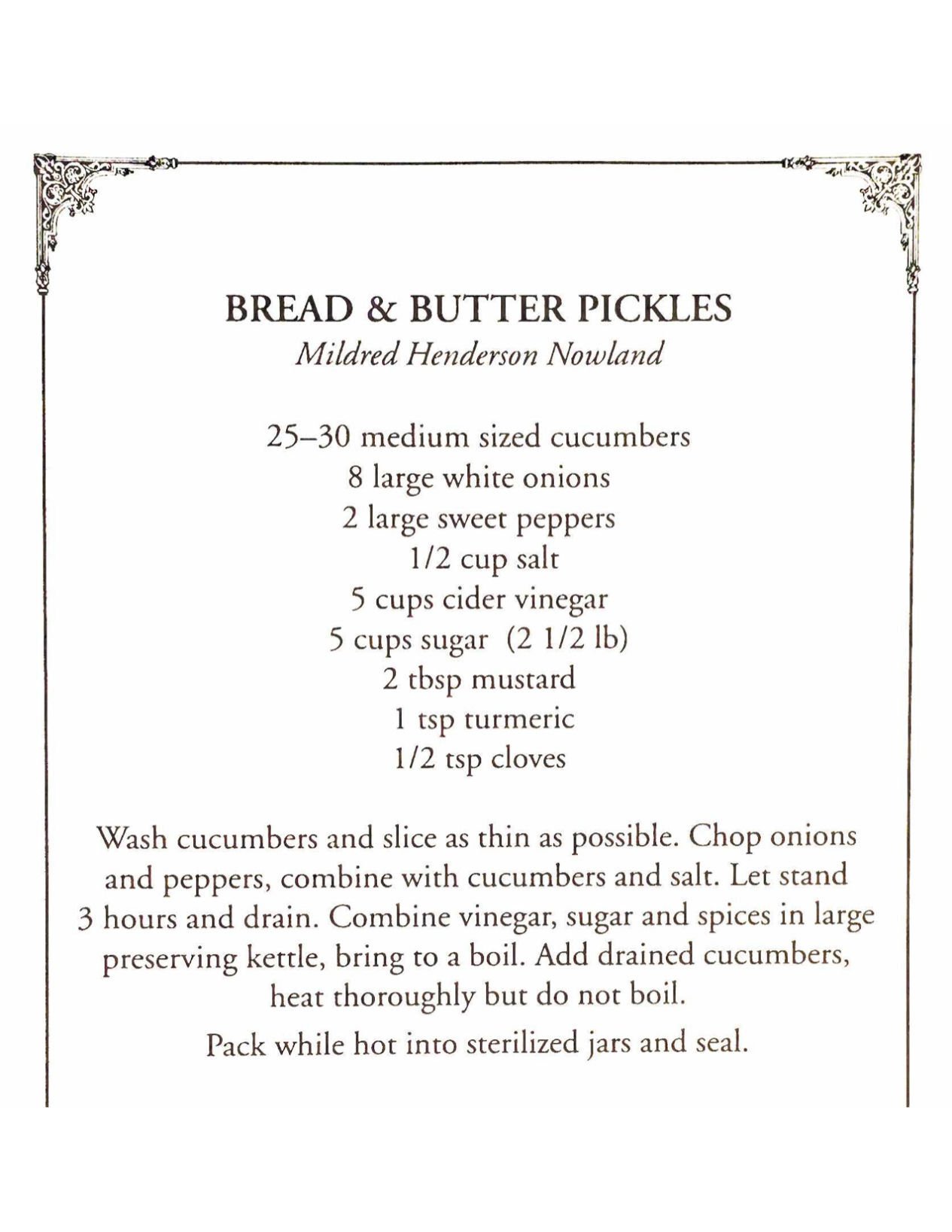 Mildred Henderson Nowland’s bread and butter pickle recipe, one of which is listed in Food, Faith, & Families. 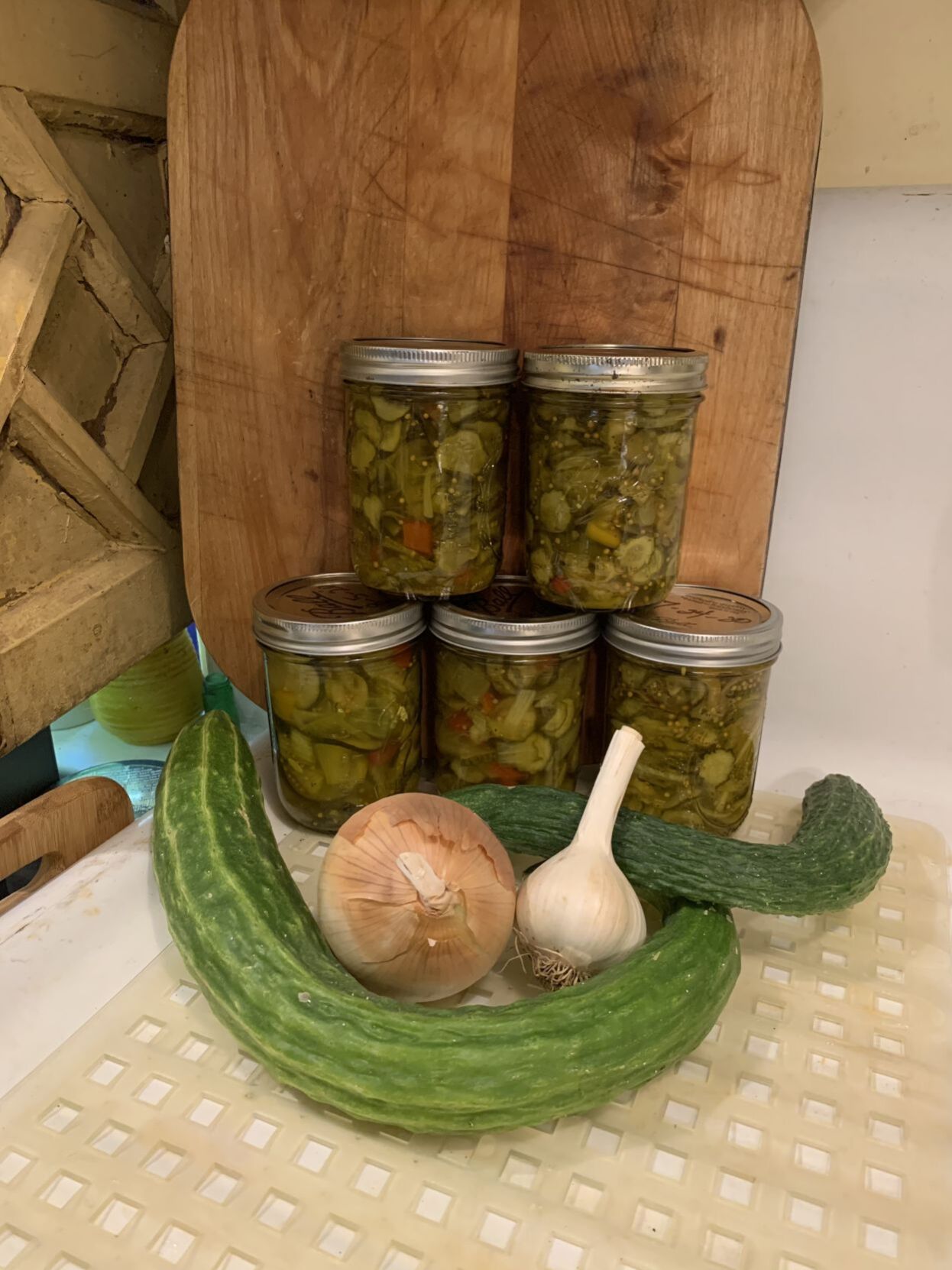 The finished product. Linda Peterson-Singleton’s bread and butter pickles, jarred and ready to be stored (or eaten).

Mildred Henderson Nowland’s bread and butter pickle recipe, one of which is listed in Food, Faith, & Families.

The finished product. Linda Peterson-Singleton’s bread and butter pickles, jarred and ready to be stored (or eaten).

ELKTON – In a recent family gathering (don’t worry there were less than 10 of us), it came to my attention that both my mother and my aunt had recently been pickling (bread and butter pickles to be exact). This is something they both do every summer, and have done so since childhood, so I really didn’t think too much of it at first. However, I soon learned that unlike previous summers, this one had provided them with two very different pickling experiences.

My aunt, who lives in the Fair Hill area of Cecil County reported that she had a very difficult time locating the necessary pickling spices (these include celery seed, mustard seed, and turmeric). She had apparently tried several local grocery stores, but no luck. My uncle and cousin had also tried to help her out by scouring several other stores throughout Cecil County, as well as neighboring Newark, but no luck there either. The stores were all sold out. My aunt finally resorted to purchasing the spices from Amazon. She had no other choice. The pickles had to get made!

My mom on the other hand, who lives in the Port Deposit area of Cecil County reported that she had no problem finding the necessary spices. My stepfather had apparently shopped in near by Havre de Grace for the spices and came home with everything needed. No issues were had.

I found myself sitting there with question marks flying through my head. How could two women, both living in the same county have two very different pickling adventures?

The wheels started turning, “is everyone in the county pickling all of sudden?” Maybe everyone had read my article from May on the Victory Gardens of WWI and decided to take up their trowels and plows and start planting gardens? After all, we are in the midst of a pandemic so perhaps people were in fact doing more gardening and subsequently more canning and pickling. Was everyone now in a panic, buying up all of the pickling spices though? Was Cecil County in another grocery store crisis? Or, was it just one of those things whereby chance, every store in Cecil County was sold out?

Now, I can only report on what I’ve been told, and obviously I have no supporting evidence other than the information provided by my immediate family members. I did try to get the inside scoop from an acquaintance that works for McCormick, but those texts went unanswered. Maybe they were too busy making more pickling spices.

Anyway, I do sincerely hope that everyone is pickling and canning. It’s good for us. Generation after generation, we become more and more removed from our ancestors and survival skills. Relying on grocery stores to supply us with all of our foods has left us vulnerable and ill prepared. If we put food up in the summer, we’ll always have something to eat in the winter.

By the way, I never thought I’d be writing an article about pickles; both canning and situational, but if 2020 has taught me anything, it’s that we should always expect the unexpected.

So, as my cousin Molly so humorously put it, “I guess we’ll all just have to ‘romaine’ calm and ‘dill’ with it.” She has a lot of jokes for someone living up in fancy New York. I’m sure they have an abundance of pickling spices unlike us rural folks out here in the county. However, I suspect that’s because no one is canning pickles up there! I guess we should have asked her to ship us some spices (she owes us for the toilet paper we shipped to her anyway) instead of ordering from Amazon.

Happy pickling everyone! Remember to shop local and support our farmers!