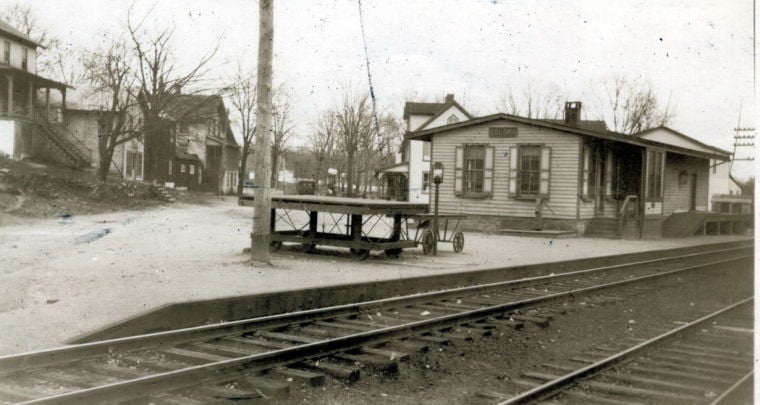 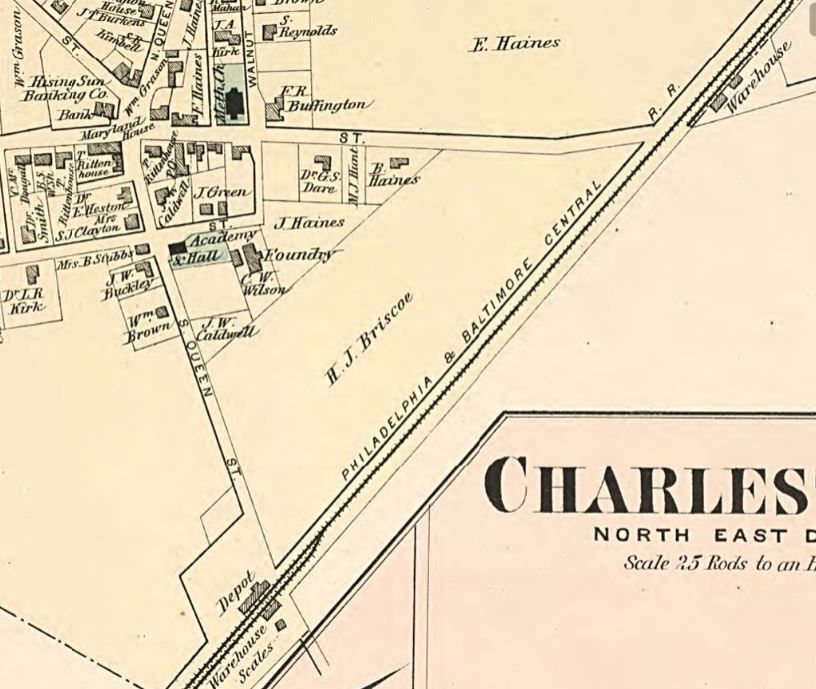 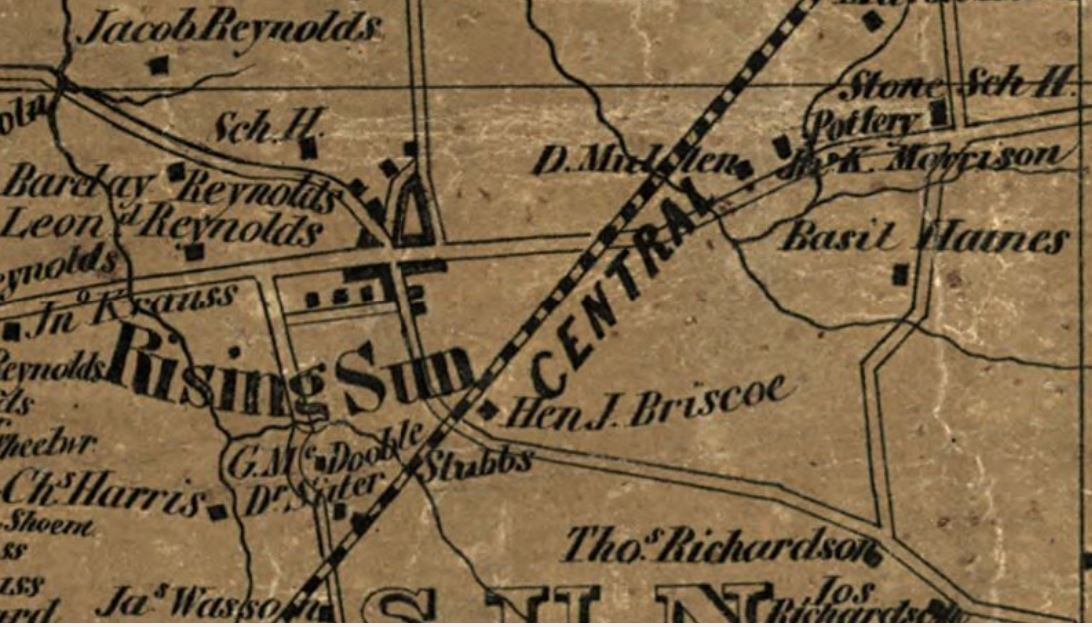 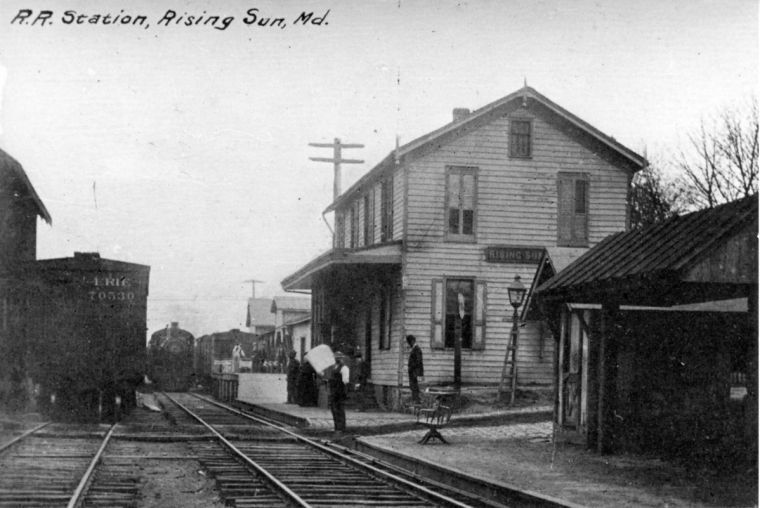 On December 22, 1860 the first engine, “Rockdale,” pulled into Oxford, Pennsylvania.

By December of 1865, the P & B Central had extended its line to Rising Sun. On Christmas Day of that year an excursion train ran from the Cecil County town to Oxford, Pennsylvania, for the benefit of the Presbyterian Church. Cars did not travel the route regularly, though, because the terminus had neither a turntable, depot or water station.

The Cecil Whig (3/34/1866) published a letter from a Rising Sun resident, who related the changes that had occurred in his town since the advent of the railroad.

Mr. Editor: — An important era has taken place in our village. From being a quiet, old-fashioned finished Maryland village, we have been changed into an important railroad terminus, having daily connections with Philadelphia. As a result, property has become in great demand and prices have increased enormously. Thus at the vendue of Mr. Cooper, a few weeks since, the old tavern stand sold for over seven thousand dollars, with only two acres of land attached. Building lots, 150 feet deep, sold for $3 dollars a foot; front and corner lots, in public places, double this price. Two new warehouses had gone up since the railroad has been opened, and grain is now bought and manures and fertilizers sold after the most improved fashion. We have now a daily train of cars for Philadelphia, leaving here at 5 ½ o’clock in the morning and returning at 8 o’clock in the evening, giving passengers some six hours in the city. Also, a market train twice a week. A number of new buildings are underway in the village and several more are expected to go up in the Spring.

To generate funds for completion of the line to the Susquehanna stock holders voted to mortgage the Cecil County section of the line for $300,000 dollars. At the same time the Philadelphia, Wilmington and Baltimore Railroad completed their branch to Port Deposit and proposed extending that line to connect with P & B Central at the crossing of the Susquehanna. The Cecil Whig (6/2/1866) quoted the Oxford Press:

This will at once give us all the advantages of a through route to Baltimore. It is also in contemplation to continue the construction of the road through Harford and Baltimore Counties to Baltimore as fast as the funds can be raised for the purpose. The track is at present completed through to Briscoe’s land, west of Rising Sun, and the workmen are engaged in grading beyond that point. The projected road from Columbia down the Susquehanna to Port Deposit, will be constructed in the course of a few years; the Penna. Central company having already made a branch of about one mile in that direction in the Borough of Columbia.

A year later correspondents from Rising Sun continued to write to the Whig, noting improvements to their town as a result of the railroad. A new sidewalk was put down to accommodate additional pedestrians, and John A. Thompson added a livery service for the convenience of his hotel’s patrons. Stearns & Quigley, who had the contract for laying the tracks from the town to the river, fully expected to have cars running by January, 1868.

But the railroad’s progress did not meet everyone’s expectations. In June 1867, a disgruntled Port Deposit correspondent wrote:

The Philadelphia Central Railroad will complete one of their bridges, over Basin Run near Rowlandsville, this week. It is 17 feet above the water level, 120 feet span, on the Howe Truss plan, no arch. Mr. A. S. Fletcher has the structure in charge.--Mr. John M. Hood, the engineer, is pushing the work ahead, and has workmen now engaged upon abutments of the upper bridge, over the Octoraro Creek. Per contra, the Columbia drags her slow length along, for which dilatory action everybody blames everybody else, and nobody is accountable. At the present rate of construction, the engine which reaches Columbia from Port by this route will sound its whistle there precisely when Gabriel sounds his trumpet.

An update in March 1868 noted that P & B Central was ready to put down tracks as soon as the ground was ready for the rails and would begin at once to lay rails between Rising Sun and Rowlandsville, where the grading had been completed over the winter. Now, regarding that bothersome stretch noted above, the Whig reports: “The Columbia and Port Deposit road has been put under contract from the latter point to the Octoraro, and a large force is employed in grading. Colonel J. J. Heckart and John Keaveny have the contract for this section. The object is to push the work forward as fast as possible in order to meet the Central road at the mouth of the Octoraro early in the summer.”

Commercial activity flourished along the railroad. R. Allen Harris built a hotel; William Mullen, a house; Hugh Wright, a granite dwelling; Captain Glacken, a barn; Robert A. Saunders, a gothic house; and A. J. McVey, a frame house. In excavating for building materials, Powley & Long of Oxford discovered a strata of rock similar to that found at Port Deposit. They immediately opened quarries to take out building stone. The old Liberty Grove Schoolhouse stood in the way and was demolished.

On the east side of the Vinegar Hill-Port Deposit road, Robert J. Rowland built a “cottage style” stone building and leased it to New York and Cecil Merchandise Company for its store.

The bridges erected over Basin Run and the Octaro [sic] Creek, (there are some half dozen or more,) are of a very superior class. The stone work of some of those bridges was done by Mr. Reese McDowell, an old resident of this neighborhood. The masonry is of superior order and displays considerable artistic taste. The deep cut between Basin Run and Octoraro creek has been made through solid granite, costing a large amount of money to get it to the level of the road grade. Powley & Long are preparing to erect a depot for the Company, also, a grain warehouse, telegraph office, dwellings, and a first-class hotel. John Green is building a blacksmith and wheelwright shop. A new street will soon be opened on the south side of Basin Run, to be known as Glacken’s street.

Several weeks later, railroad officials of the P & B Central met at Liberty Grove and unanimously agreed to build a depot there. At the same time, they selected a site for the West Nottingham station.

By October, the Whig reported that the depot was rapidly approaching completion. Opposite the depot, Wm. Waring built a large warehouse for the storage of grain, which would be then shipped to eastern and southern markets.

At last in mid-December, the Whig reported: “The Port Deposit & Columbia and Phil. & Balt. Central Railroads have been joined, and a train ran from Port to Rowlandsville on Tuesday last, crossing both bridges over the Octoraro Creek.”

As 1869 dawns, P & B Central plans to run trains regularly from Port Deposit to Philadelphia. A correspondent views the situation with slight misgivings because the men who have not been paid for their work on the cut near Rowlandsville chained a car and added a few other creative obstructions to the roadbed. Their intention was not to allow trains to pass until they received their pay.

The problem was evidently resolved because the Whig ran a letter from Port Deposit [i]n April that reported the first trip to Baltimore. The train carried Bayard Taylor, Hon. John Hickman and other dignitaries.

Louis C. Whitely, wrote in “Octoraro Odyssey” (The High Line, Autumn 1986) that the . . . Rowlandsville area is a “bridge modeler’s dream. Besides the Octoraro’s variety of structures and the C. and P. D.’s (Columbia and Port Deposit’s) beautiful concrete arches, several spindly roadway bridges crisscross the creeks, although some have been washed out by floods.”

The Pennsylvania Railroad abandoned the Octoraro branch south of Colora, Maryland in 1961. Washouts of bridges near Wawa in 1971 landlocked the Branch. It waited for the Octoraro Railway to restore the connection with the Reading line, and the national rail network at Chadd’s Ford Junction. The ends of the branch south of Colora and from Chadd’s Ford Junction north remain severed, and there is no operation south of the Maryland state line.

Where stations remain today, modern additions and alterations have often obscured their original function. Only their proximity to a track suggests their former purpose to the casual passerby.

Visit us when we reopen if you want to learn more about the history of railroads in Cecil County. We miss you and hope to reopen soon!