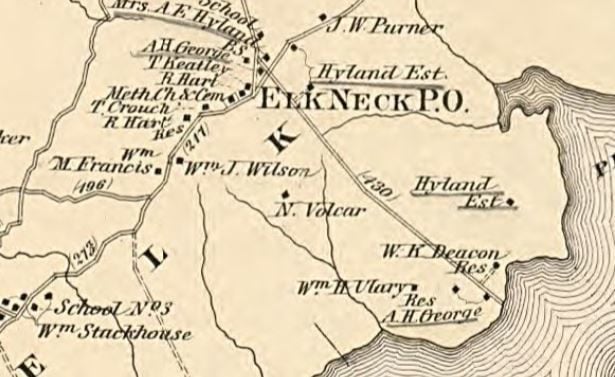 1877 Cecil County atlas showing the location of Voelcker’s farm on Elk Neck. Many of the people on neighboring properties were called as witnesses or were part of the search party. Note above Voelcker’s name that of William J. Wilson, the man who purchased Voelker’s property after his death. 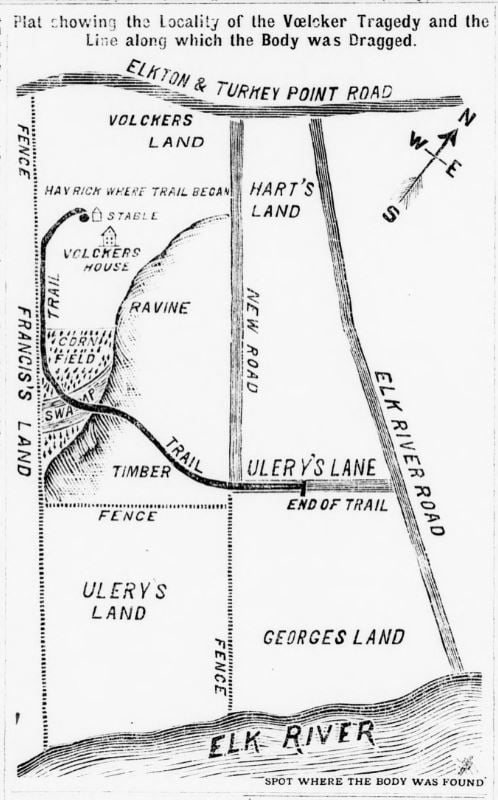 Plat of the murder scene and the path taken to dispose of the body in the river, prepared for investigators by local surveyor John Falls. From the Nov. 5, 1881 Cecil Whig.

1877 Cecil County atlas showing the location of Voelcker’s farm on Elk Neck. Many of the people on neighboring properties were called as witnesses or were part of the search party. Note above Voelcker’s name that of William J. Wilson, the man who purchased Voelker’s property after his death.

Plat of the murder scene and the path taken to dispose of the body in the river, prepared for investigators by local surveyor John Falls. From the Nov. 5, 1881 Cecil Whig.

NORTH EAST — Nicholas Voelcker, an immigrant from Bavaria, arrived in the United States sometime in the 1830s with his two brothers, Henry and Jacob. He worked hard to make his way in his new country, first in New York, then in Jersey City, Philadelphia, and finally on Elk Neck in Cecil County. He had been prosperous in Philadelphia, and continued to live there after having bought his farm on Elk Neck. Eventually, he gave up city life and moved full time to his farm.

Census records show us that he normally had employees living with him. This was true of his time in Philadelphia, and it was necessary here for the operation of the farm, especially after the death of his wife Anna late in 1879. Sometime after that, Voelcker’s financial situation took a downturn; in the Cecil Whig he was described as “embarrassed financially” and in January of 1881, he sold livestock, grain, and even household furniture at auction and was forced to mortgage his property. In the spring, Voelcker rented William J. Arrants his property “for shares,” or a percentage of profits from the crops raised, and they also shared the house, a small building with a room above a room and an attached shed on the first floor which served as a bedroom for Arrants and his wife, Ida.

On the morning of Tuesday, Sept. 6, a neighbor named Harris who was providing his thresher to harvest Voelcker’s crops, arrived with his men to begin work. Voelcker was not there, and could not be found anywhere. As the day wore on, neighbors joined in to look for the missing man. Late in the day it was noticed that something appeared to have been dragged from the barnyard and out across the countryside. This trail, upon which occasional drops or smears of blood were observed, was followed until darkness fell and the search was abandoned until it was light the following day. Meanwhile, the tenant Arrants had left early in the morning for Wilmington with peaches to sell. He stayed there overnight and continued to sell the peaches until they had all been sold. There with some of his profits, he bought a new shirt, which he wore home.

The search for Voelcker, or rather, his body, as all were convinced that he had met with some terrible fate, began anew where it had left off. The trail led all the way to the river, where the searchers were hailed by three young boys, who shouted and pointed to a man’s foot visible above the surface of the water. One of the searchers commandeered another boat. When he reached the site, he found the body was weighted down with a length of chain attached to an anchor. Removing these, he towed the corpse to shore by a rope which was found threaded through the armholes of a vest on the body, and where it was identified as the missing man. He had been bashed in the face. The weapon was a short fence post, which when found showed evidence of blood and hair. The authorities were summoned and it was not long before it was decided that William Arrants, still in Wilmington, was the most likely culprit.

Arrants, having by chance met with some acquaintances, was made aware of the situation and that he was a suspect. He made his way home and turned himself in to the sheriff. His discarded shirt, found in his wagon, had bloodstains on it, which Arrants claimed was from butchering a sheep. When incarcerated, several local doctors, including Housekeeper, Mitchell, and Jamar, examined him for any signs of wounds or abrasions which could have been incurred during a fight or removal of the body. They all noted a pattern of abrasions on one shoulder. The investigation of the murder was given top priority and handled very carefully, with “secret service” (probably Pinkerton detectives) brought in to handle the case. The full extent of what was then rudimentary forensic investigation was called upon, as the bloody shirt was sent to Dr. Joseph Richardson, a blood corpuscle expert in Philadelphia, who would determine if the blood was human or animal. It was revealed that Arrants and Voelcker did not get along, and had come to blows on at least one occasion.

The trial of William J. Arrants for the murder of Nicholas Voelcker began on Monday, October 31 with jury selection. The prosecution was handled by State’s Attorney Charles Crothers; for the defense, Alexander Evans, W. S. Evans and John E. Wilson. Judge Stump and Judge Wickes were on the bench. The prosecution’s case was circumstantial but damning. Arrants’ previous altercation with the victim, along with testimony asserting that he had threatened to kill Voelcker (though the person to whom the comment was directed was convinced he was not serious), the abrasions on Arrants’ shoulder which might have been caused by a rope used to drag the body to the river, were all against him. However, the shirt was determined by Dr. Richardson to have been stained with sheep blood, as Arrants claimed. The defense called witness after witness, including the sheriff, to testify to Arrants’ good behavior and standing in his community. None of the doctors was willing to say for sure that the marks on Arrants shoulder were caused by a rope. By Thursday, November 3, only the closing arguments remained. The jury retired to consider a verdict late in the afternoon. They were out only fifteen minutes: “not guilty” was their decision.

One wonders, had modern forensic tools been available, would the verdict have been the same? It is unlikely that we will ever know the truth. William J. Arrants went on to lead his life, it would seem, with no further brushes with the law. He and Ida eventually had six children. He died in December of 1914 and is buried at Hart’s Church. Nicholas Voelcker had long been forgotten by then. He was buried at Hart’s Church as well. His property was sold in March of 1882 to William J. Wilson for $1250. In April of 1882, the house burned to the ground, taking with it one of the last physical manifestations of Nicholas Voelcker’s existence.

Search the Historical Society’s digital newspaper collection for other Cecil County cold cases. We’re open on Mondays and Thursdays from 10 a.m. to 4 p.m., and on the 1st Saturday of the month from 10 a.m. to 2 p.m.