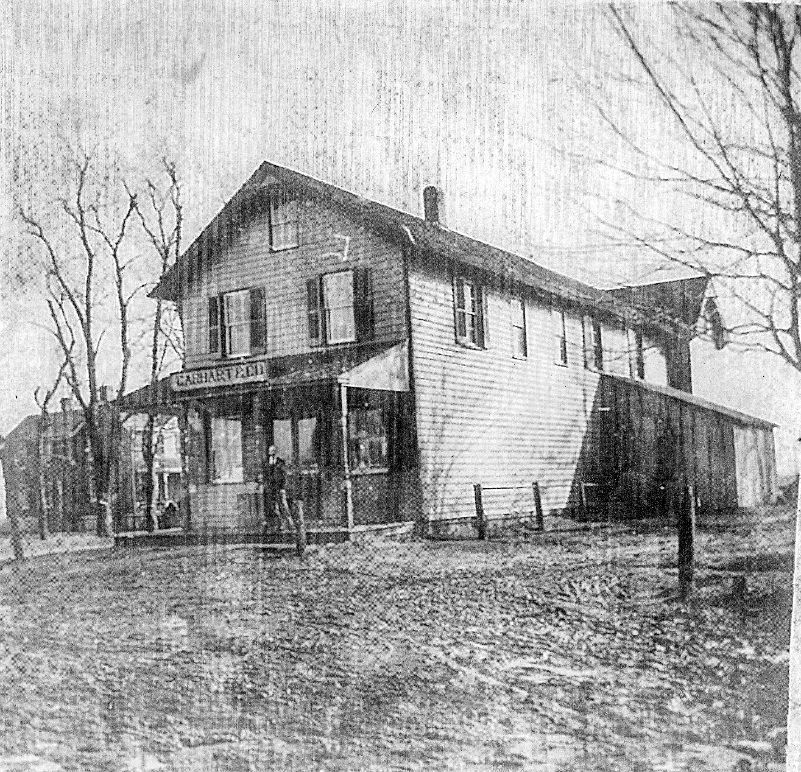 The Carhart and Co. Store is seen here in a postcard from 1900. 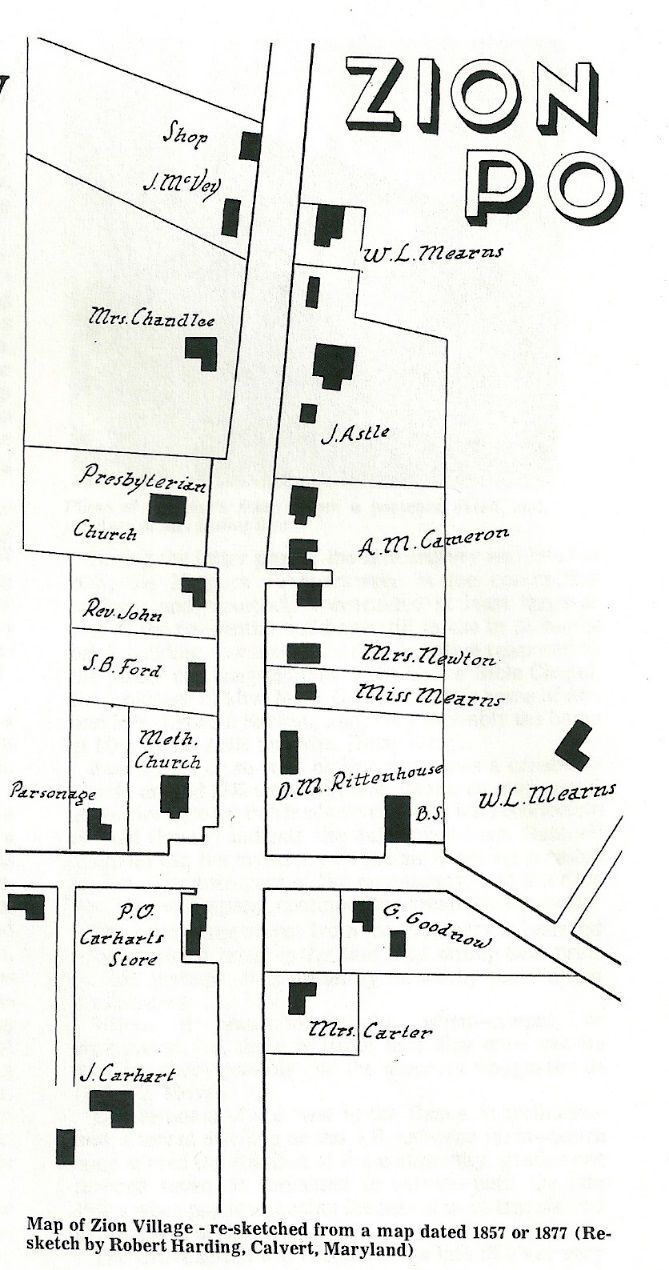 This map of Zion Village shows the location of the Carhart and Co. Store. 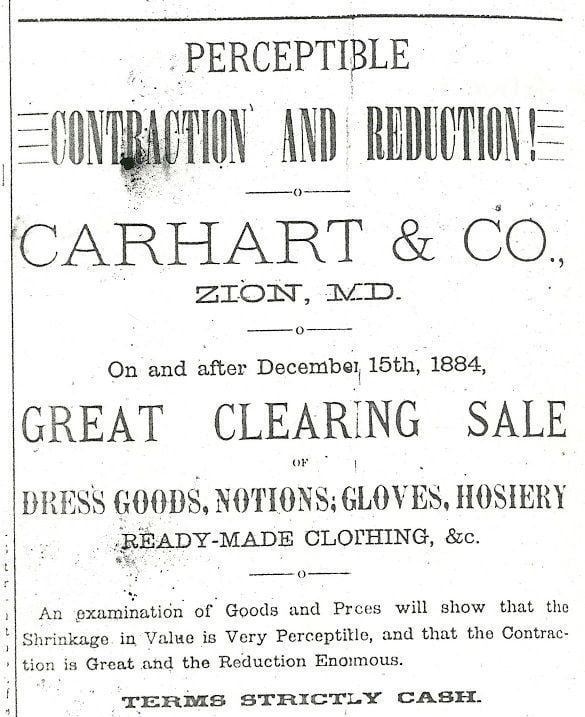 This advertisement for the Carhart and Co. Store is from the May 23, 1885, Cecil Democrat.

The Carhart and Co. Store is seen here in a postcard from 1900.

This map of Zion Village shows the location of the Carhart and Co. Store.

This advertisement for the Carhart and Co. Store is from the May 23, 1885, Cecil Democrat.

Zion is a small village in the 9th district, between Bay View and Calvert. It was and continues to be a farming area, but on the main road, there is a rich history of general stores serving the surrounding community.

With all that activity, there were sure to be accidents and I have run into several accounts of the general store, in one form or another, catching fire.

The primary general store in Zion was called Carhart and Co. It was located at the crossroads of what is now England Creamery and Old Zion Roads. It also served as the Village Post Office for a time.

The following excerpt from the History of Zion and Surrounding Area by George B. Prettyman Sr., published in the 300th Anniversary Commemorative Booklet, Historical Sketches and Pictures of Cecil County, Maryland gives a brief overview of the general stores in Zion.

“The Carhart Store, as the photograph indicates, was a frame structure, and stood on the site of Ernie’s Store which now serves the community. Carhart’s Store was operated in the late 1890s and early 1900s by Messrs. Clayton and Austin Carhart. It was considered one of the area’s best stocked general “department” stores and attracted customers from as far away as Oxford, Pennsylvania, and Newark, Delaware. Later it was owned by the Gregg Brothers – Ed and Walter. It was destroyed in a fire around 1922, by which time a young man by the name of N.R. Touchton had occupied the store property directly across from it and was beginning a career in business from which he retired in 1962. Mr Touchton later purchased the site of the old Carhart Store and in 1946 built the first self-service store in the county. Mr. Ernest Coulson, who had served as clerk for Mr. Touchton, became proprietor at that time.”

“Ernie’s Store” as Mr. Prettyman writes, is a small one-story brick structure that is still standing in the village today.

Mr. Norman (Dick) Touchton, one of the prominent general store owners in Zion, talks about the “store loafer” in his biography entitled Dick the Country Store Keeper. Before supermarkets and electricity, before refrigerators and radios, the general store was a focal point of a community. It is with this perspective in mind that we find the circumstances of this report from the Nov. 19, 1920, edition of the Midland Journal.

“The general store of J. M. C. Carhart, at Zion, narrowly escaped destruction by fire on Friday morning. It is supposed a cigar or cigarette stump, thrown in a saw-dust box cuspidor smoldered all night, gradually burning a hole in the floor, through which the charred debris dropped into the cellar. Smoke seen issuing from the windows caused a hurried investigation and the threatened blaze was extinguished. The floor and end of a counter being slightly damaged. The timely discovery was fortunate.”

Besides human carelessness, the need for candles and kerosene lamps as well as the “growing pains” associated with the spread of electricity posed significant risk for fires. This next record, published in the May 5, 1922, edition of the Midland Journal gives a detailed description of the fire mentioned by Mr. Prettyman in his history of Zion.

“The blowing of the whistle at the condenser plant, and the screech of the siren on the fire engine aroused our citizens about two o’clock Saturday morning last, word having been telephoned from Zion that the large store and dwelling of Gregg Bros., known as the Carhart property, was on fire.

Twenty minutes after receiving the call, the Community Fire. Co., of Rising Sun, was at the scene with its new engine, this being the first run of the machine to a fire. Owing to delay in getting the night operator at the telephone exchange awake and his delay in being able to arouse the night man at the condensary, the building was practically burned before the engine, and the large number of members of the company who responded to the call, reached Zion. The fire had been discovered about 1 a.m. by one of the Gregg brothers being aroused by smoke, the second floor of the building being occupied as living quarters. He hastily aroused other members of the family and made an investigation that showed the store room to be filled with dense smoke, flames breaking out in the rear of the store before they could summons aid. The fire spread so rapidly that practically nothing was saved.

Neighbors formed bucket brigades and saved nearby buildings by extinguishing burning embers as they fell.

The store and dwelling building was totally destroyed, together with contents, including merchandise and all the household goods in the dwelling portion. The loss is fully $10,000, with insurance of $7,000 in the Cecil Mutual and Chester County Mutual Companies.

The Gregg brothers are newcomers to Zion, having purchased the property about two years ago. They had greatly improved it and built up a steadily growing business.

The Oxford and Elkton fire companies also sent engines to the scene, but there was no water supply and nothing that the firemen could do, as the building was practically burned before their arrival.

The Gregg brothers wish publicly to thank all who came to their aid and did whatever they could, and are deeply grateful for the assistance rendered them since the fire.

Zion Presbyterian Church has tendered them the use of the Session House as living quarters until such a time as they can make other arrangements.”

What is interesting about this fire is that mechanical fire engines and telephonic infrastructure existed and was put in place but at the time the community was still developing strategies to improve reaction times to a fire call and how to maximize coverage. The very next week, the Midland Journal ran a piece titled “Fire Districts, Territory Apportioned to different Companies to facilitate response to alarms.” In which it describes how the fire companies were meeting to discuss how to fix these issues, seemingly in direct response to the Carhart and Co. Fire.

The Gregg Bros. competitor, who was set up across the street from Carhart and Co. became the de facto general store in the area after the fire but eventually succumbed to a fire as well around 1946. It was at this point that the owner, Mr. Norman Touchton purchased the old Carhart property and rebuilt the general store there.