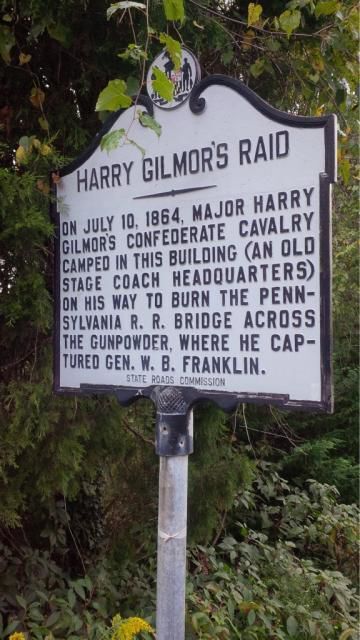 An historical marker marks Magnolia Station, the location of a horrible railroad accident in 1870. Magnolia Station was also the site of Gilmore’s Raid, a Civil War operation by Confederate soldiers to interrupt Union communications

An historical marker marks Magnolia Station, the location of a horrible railroad accident in 1870. Magnolia Station was also the site of Gilmore’s Raid, a Civil War operation by Confederate soldiers to interrupt Union communications

Magnolia Station: On the North side of Gunpowder Creek about 20 miles from Baltimore lies what used to be Magnolia Station. Bordering Aberdeen Proving Ground and the Harford Sands Company, Magnolia is a sleepy hamlet with a very interesting past. In the 20 August 1870 edition of the Cecil Whig describes a terrible railroad accident.

“On Saturday evening last as the 7.30, p.m., train from Baltimore was about three-quarters of a mile south of Magnolia Station the engine struck a bull which was on the track, throwing the locomotive, two Adams Express cars, two baggage cars and the smoking car off the track, leaving three first class passenger cars standing on the track.

J. T. Owens, track Superintendent, who resides at Charlestown, this county, and who was riding on the engine to his home, was thrown off with the engine, and received fatal injuries. Mr. Owens lay partly under the engine about two hours with the woodwork of the locomotive and cars close by him burning, the heat being so great, part of his body was burned in a fearful manner. He was finally extricated by the efforts of the Railroad employees anti the passengers, when eo was attended by a physician from Magnolia, and after lingering during Saturday night and Sunday, he died on Monday morning about 6 o’clock.

James Donavan, fireman, received slight injuries, and these were the only two hurt, all of the passengers escaping the slightest injury. The Adams Express cars caught fire by falling upon the engine and were entirely consumed together with some of the contents.”

However only 6 years prior to the accident, Magnolia Station was the site of Gilmore’s raid, a civil war operation by confederate soldiers to interrupt union communications. An excerpt below relays a first-hand account printed in the 13 July 1864 New York Times.

“I was among the passengers captured on the second train of cars captured and destroyed by a small band of rebel raiders, on Monday last, near Magnolia Station, on the north side of Gunpowder Creek, about twenty miles from Baltimore. It was the 7:30 express train from Washington, and numbered fourteen cars, some of them, however, not half-filled with passengers. On reaching the City last evening, and reading the telegraphic and other accounts of this characteristic feat of modern “chivalry,” and especially the encomiums bestowed upon the rebels engaged in it, I was a good deal surprised. I do not deny that in the mere matter of “deportment” these traitors might have been unexceptionable to Mr. Turveydrop himself. They were profuse in assurances, throughout, that neither private property nor private persons should be molested. All they professed to be after was property and persons of a public character -legitimate subjects of seizure and confiscation under the rules of civilized warfare. And in this respect there was no difference between officers and men. All alike were chivalric in “deportment” and all alike I have no sort of doubt, participated in the fruits of the thieving and robbery that followed and accompanied these professions of honorable purposes.

The truth is, the little squad of rebels at Magnolia was in nothing more honorable than a thieving and robbing raid, and cared less for doing damage to important public communications and capturing officers and soldiers of the Union, than they did for the plunder of carpet-bags and trunks. Not a foot of the railroad at that point was destroyed, nor, in burning two trains of cars, was either of the engines materially injured. The portion of the pile-track called Gunpowder Bridge, that was damaged, corresponds exactly with the length of the burning train that was forced upon it. In half an hour the interrupted telegraph line can be restored, and I was told by Mr. TILTON himself, the able and patriotic President of the railroad company, that three days is all that will be required to rebuild the “burnt bridge.” The chief occupation of Maj. GILMORE’s gallant command, at and around Magnolia, was breaking open and rifling trunks, valises, carpet-bags, boxes in care of Adams’ Express, containing delicacies for wounded and sick soldiers in rebel prisons, burning private dwelling-houses and barns, and, in the true Dick Turpin mode (but with not half the magnanimity of that highwayman,) stealing money, watches and even shirt and sleeve buttons from their defenseless victims. The capture of Gen. FRANKLIN, through the agency of a rebel Baltimore female, gives no color of legitimacy to their proceedings. It was a mere accident. The transaction that better illustrates the objects of the raid, was the capture of a poor sailor boy, just discharged and on his way home, and the stealing from him of $800, and the robbing of an old man from Maine (returning from visiting his wounded and dying son) of every-farthing he had after purchasing his homeward ticket, and of another poor man of $2.50, his all!

The true history of this Magnolia raid is briefly this: The 9:30 mail train reached Magnolia about 10:30, its passengers were plundered, and the train set on fire. A few minutes later the Washington and New-York express train arrived and passengers and train received the same treatment — all under the loud rebel professions of honorable intentions, which seem to have attracted the admiration of certain reporters, but which proved to be but Dead Sea fruit.”

The Historical Society of Cecil County will remain closed through the end of 2020. Please visit www.cecilhistory.org for news and updates.