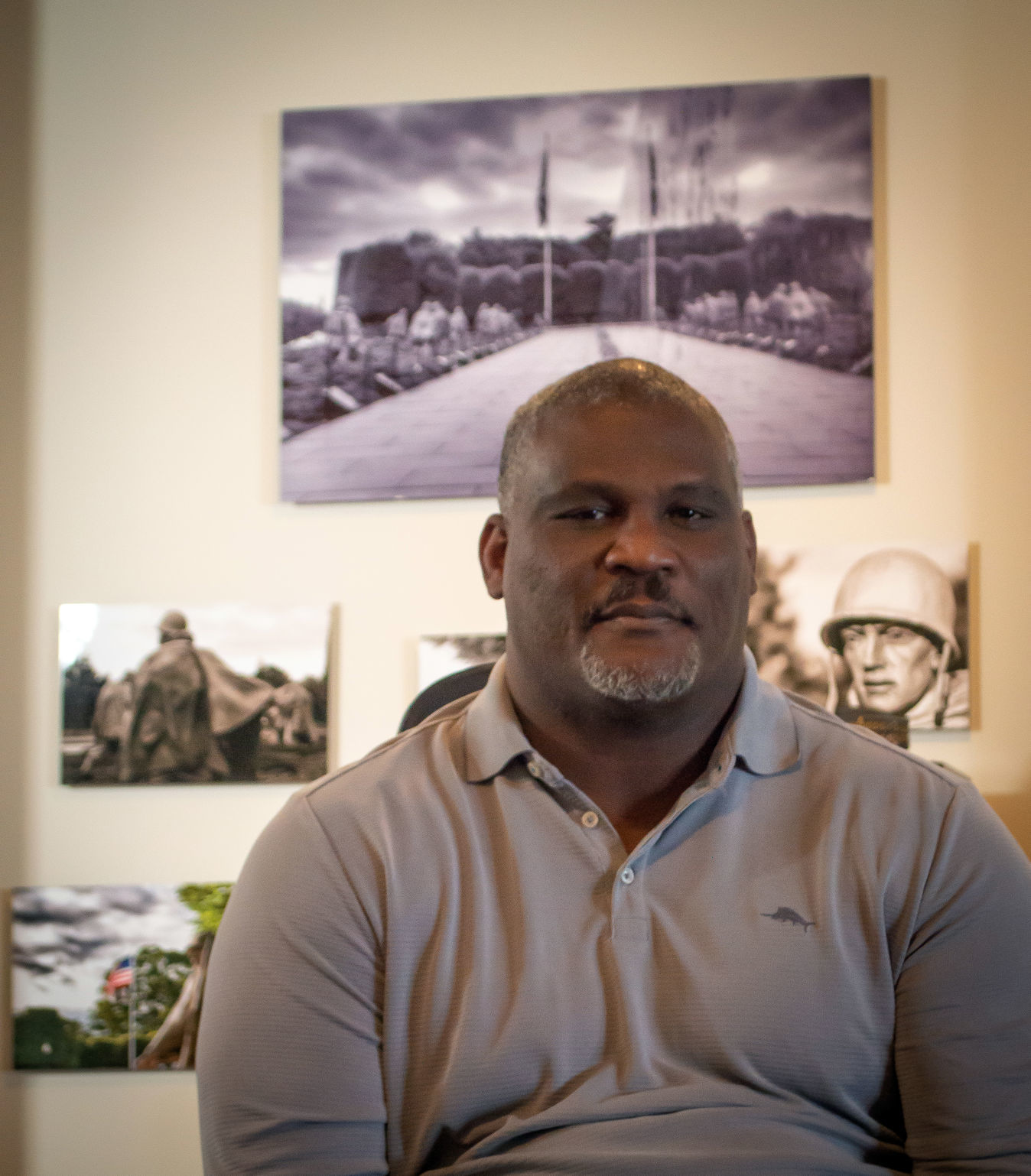 Greg Gadson relaxes at his home. 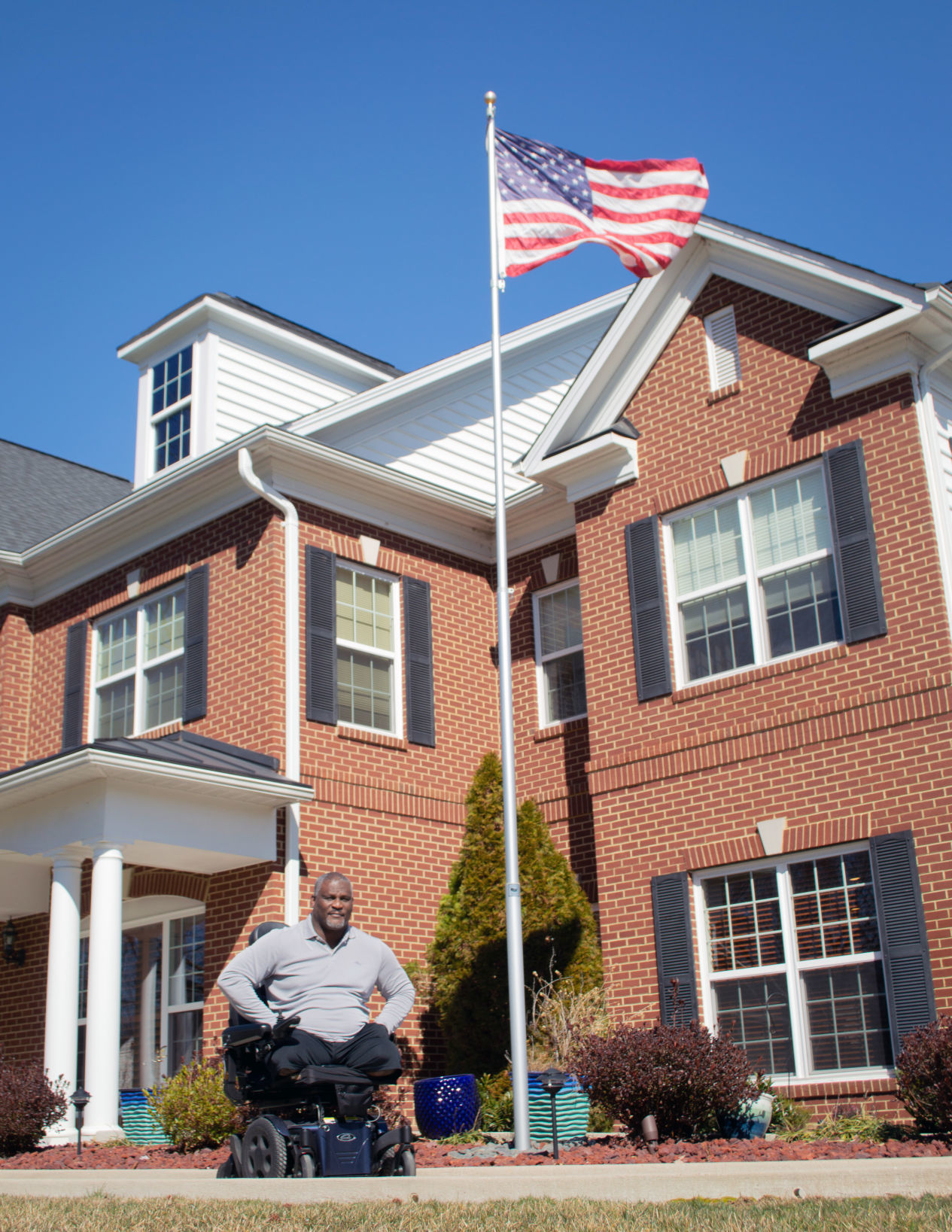 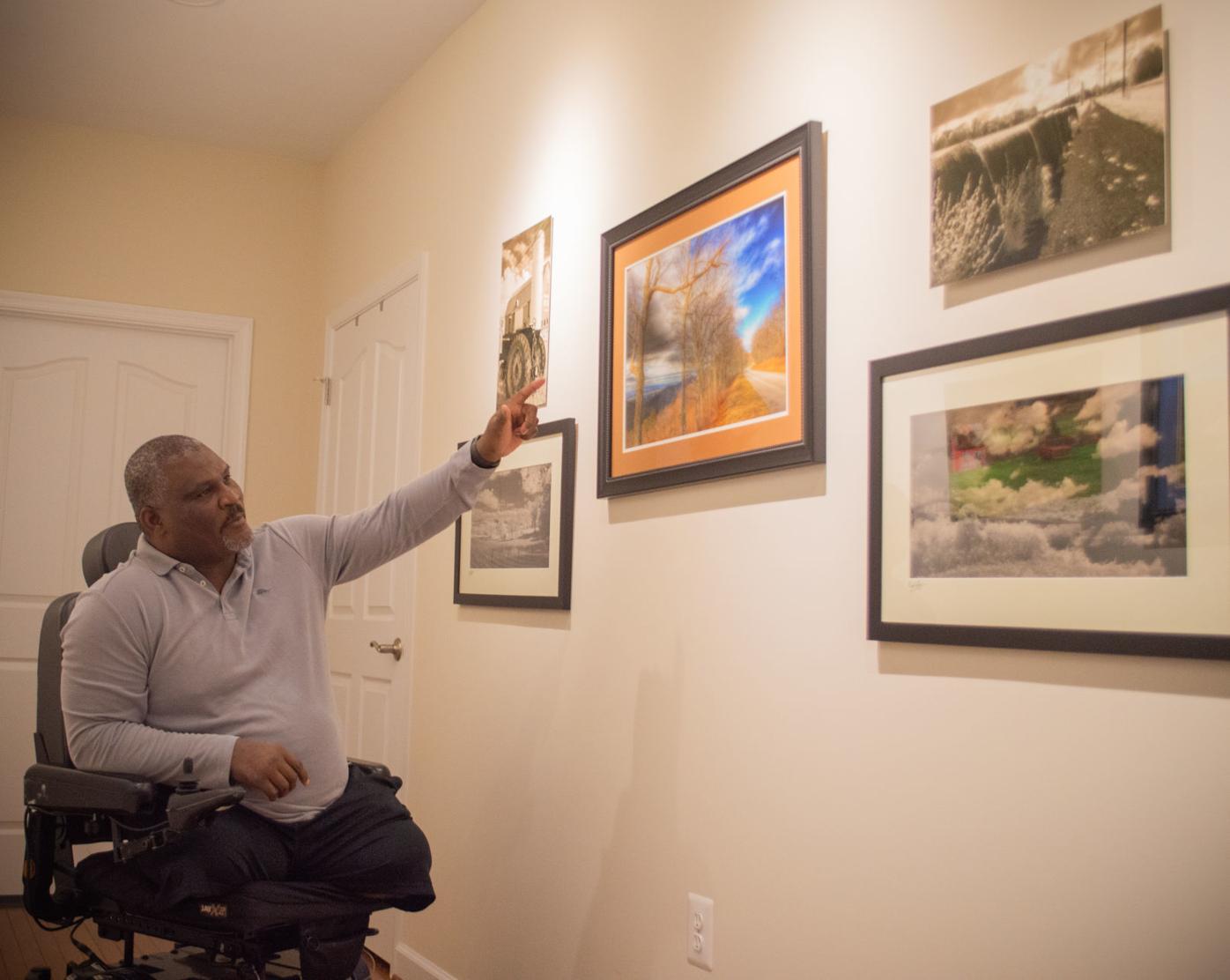 Greg Gadson looks over some of his memorabilia. 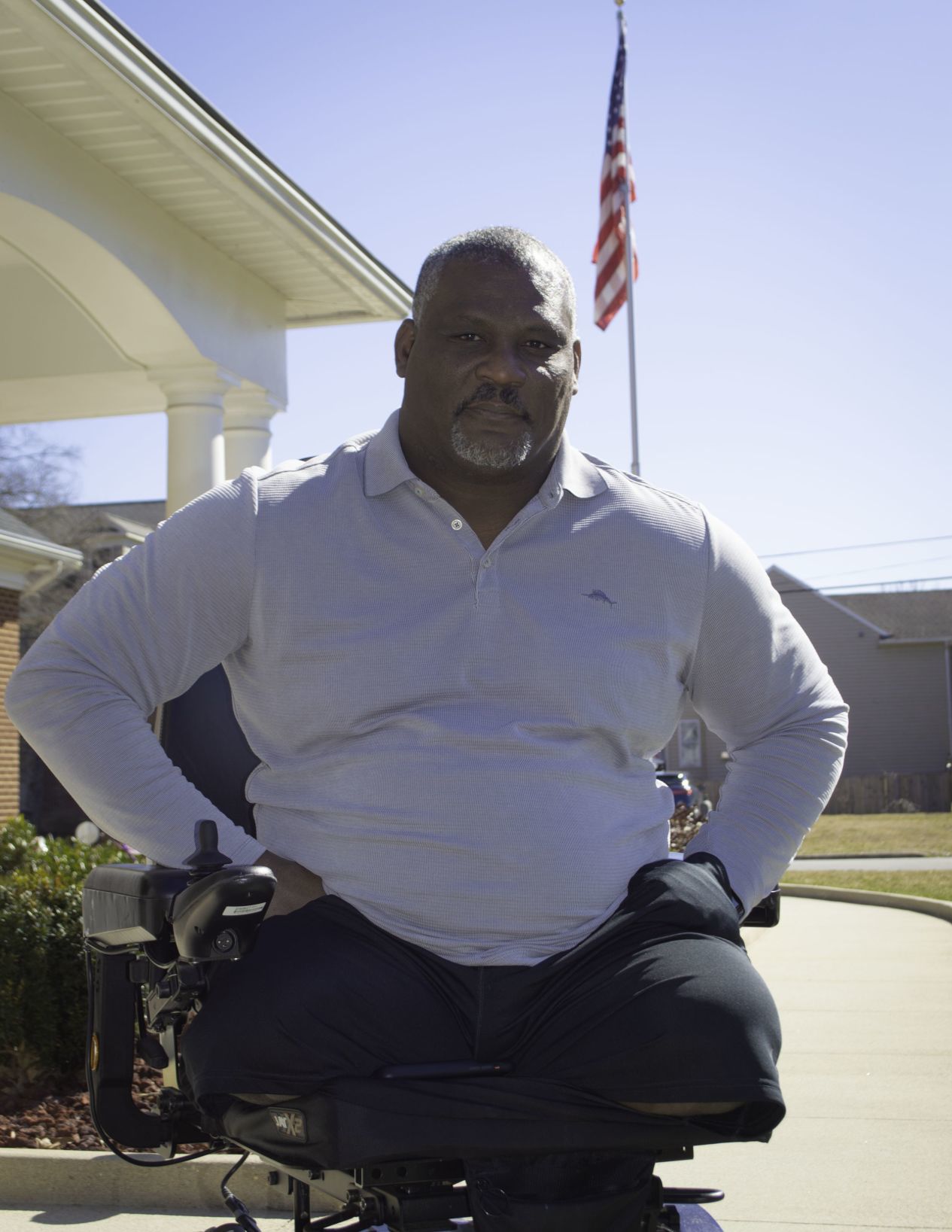 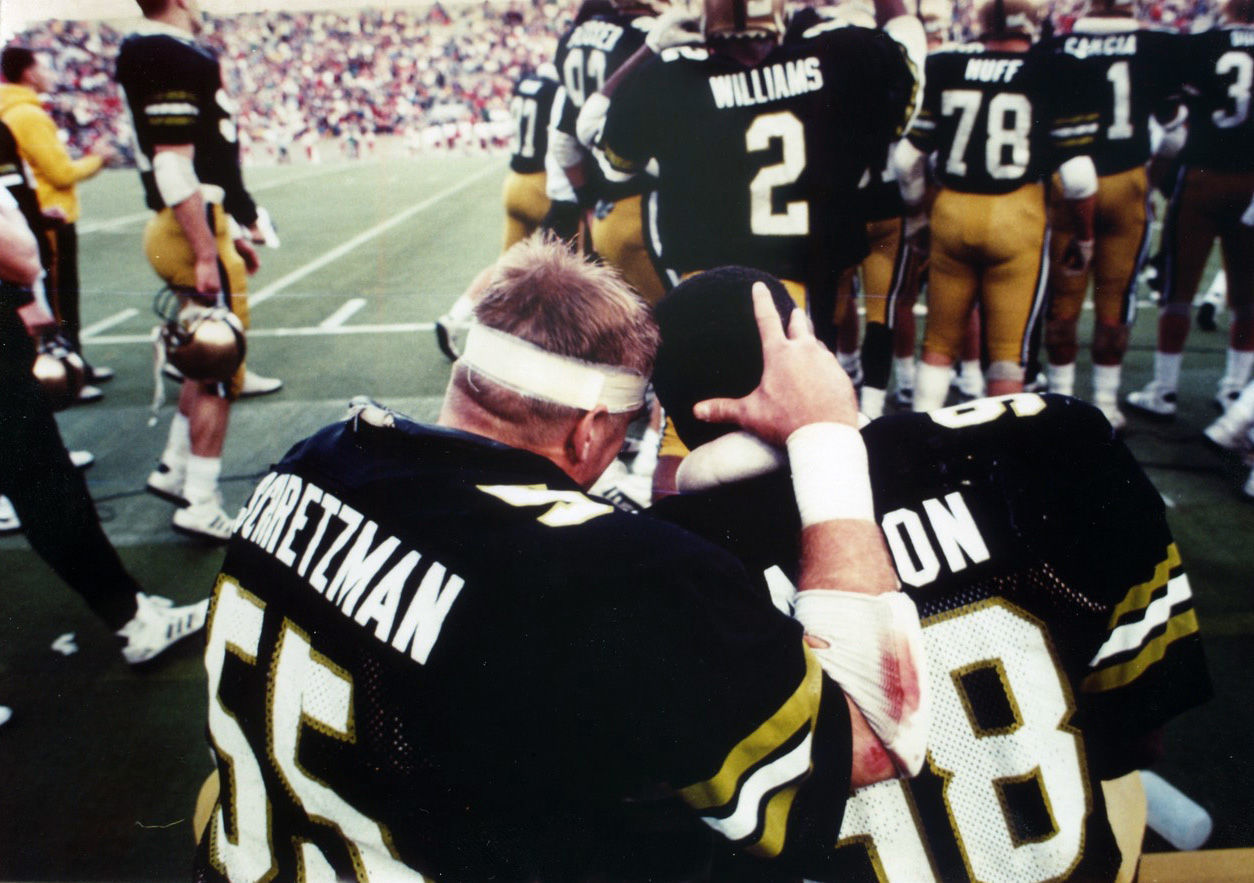 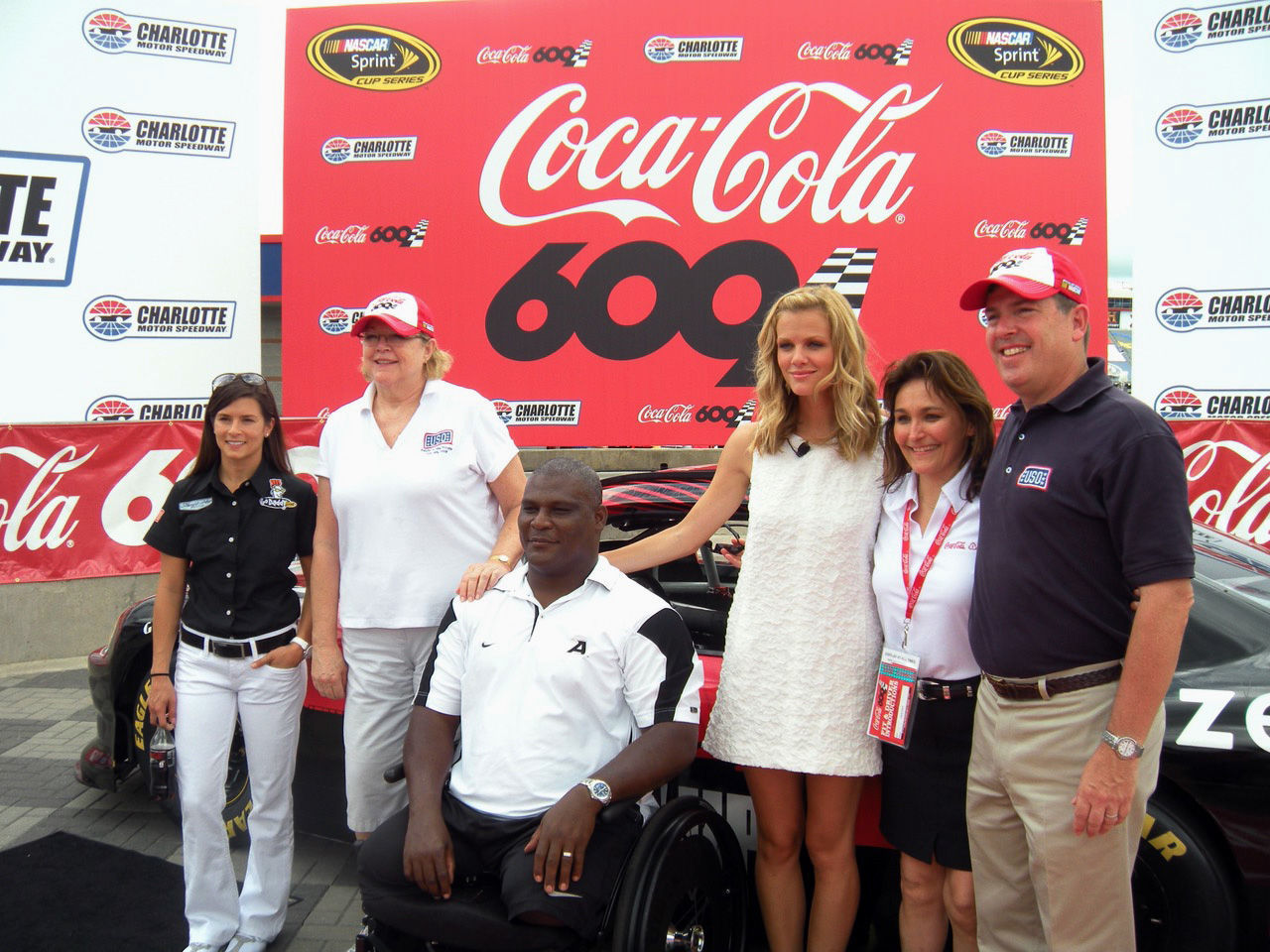 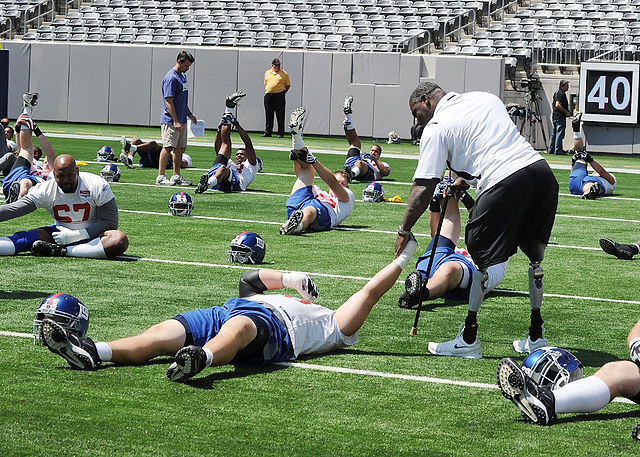 Greg Gadson trains the New York Giants at a 2009 mini-camp. 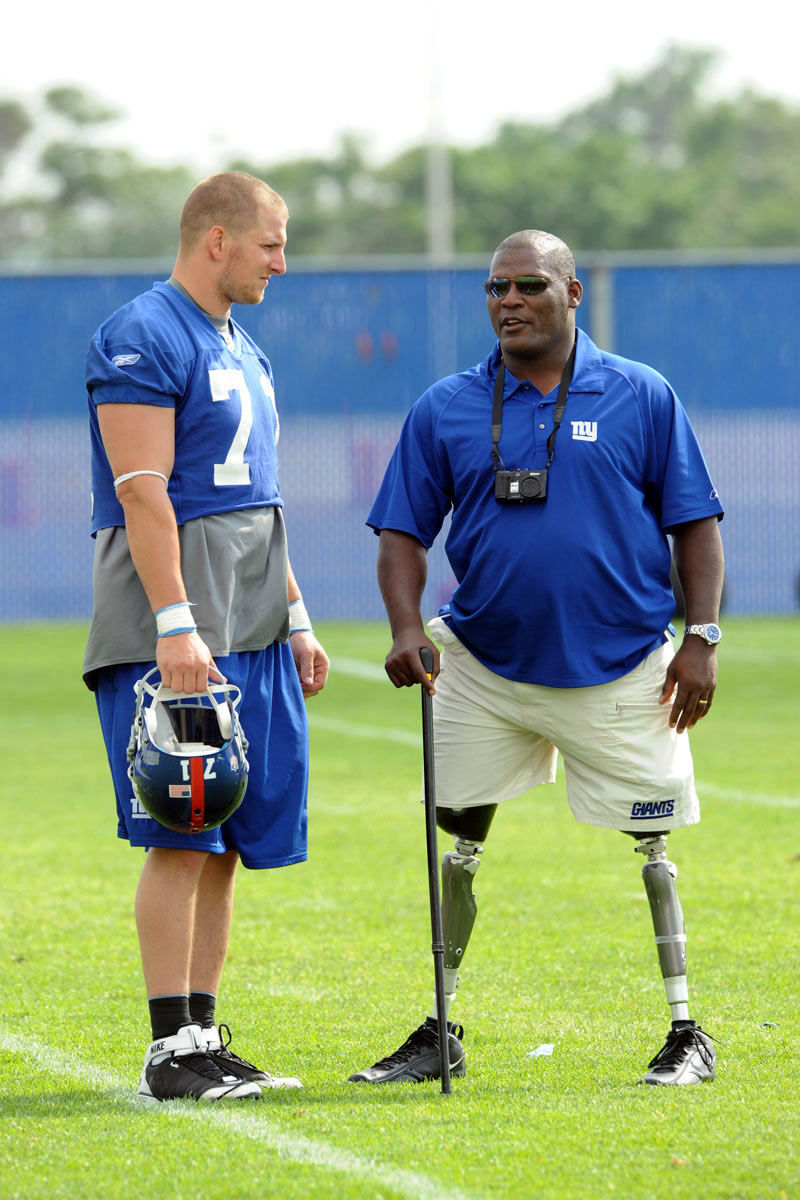 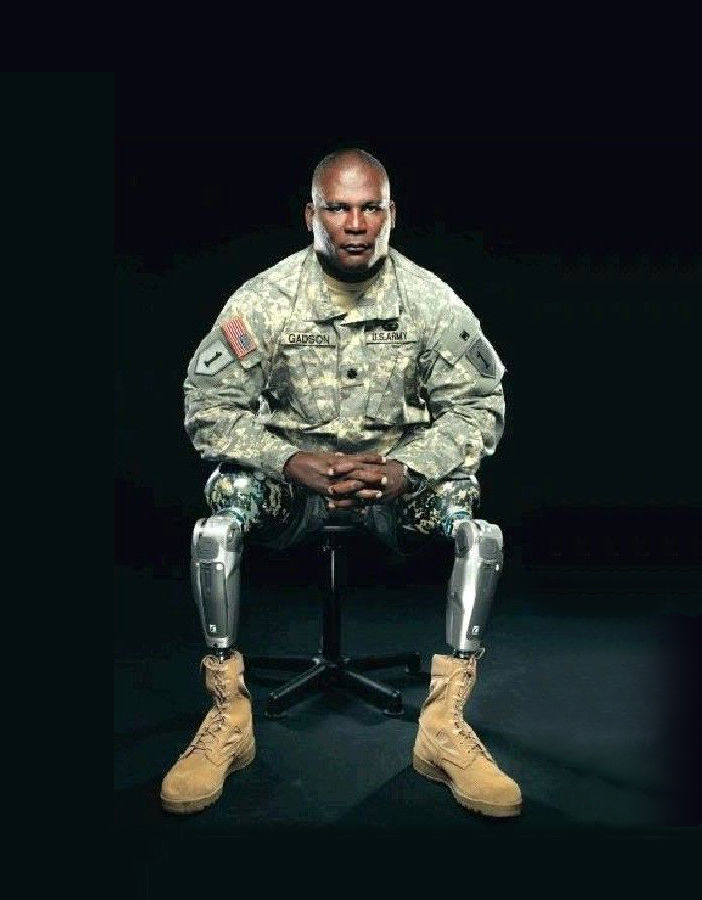 Greg Gadson retired from the Army as a lieutenant colonel. He was injured in Iraq in 2007.

Greg Gadson relaxes at his home.

Greg Gadson looks over some of his memorabilia.

Greg Gadson trains the New York Giants at a 2009 mini-camp.

Greg Gadson retired from the Army as a lieutenant colonel. He was injured in Iraq in 2007.

FORT BELVOIR — For a young boy growing up in Virginia post-Vietnam War, Greg Gadson viewed Memorial Day like most kids his age—a three-day weekend away from school.

His parents, both graduates of Howard University, found work in Chesapeake and settled in the tidewater region when Greg was just nine-years-old. Neither his mother, a teacher, nor his father, a pharmacist, had much of a connection to the military.

“Memorial Day was not something that I really understood,” he remembers. “It was just a holiday. I just didn’t have an understanding of the significance.”

As a teenager, Gadson became a popular high school football player with aspirations of playing professionally, earning a reputation for hard work both on and off the field.

“I wanted to be a professional football player and all my energy for being a decent student was so that I could get into college and play Division One football,” he says. “That was my goal.”

By his senior year, Gadson made captain of his all-state football team and was hoping to be looked-at by college scouts from large universities with programs that produced NFL superstars.

But he found that some issues can’t be fixed with hard work and dedication.

“As a five-10, 175-pound linebacker I was pretty small for my position and wasn’t ideal for Division One-A football.”

But, while he didn’t receive offers from his college wish list, he did receive a visit from a West Point recruiter.

“I took one visit to West Point, asked if it was a Division One football program and they ‘yes’ and I signed up!”

Ultimately the academy didn’t turn out to be his ticket to the NFL, but it did provide him with a good education, so he shifted focus to his major—Middle Eastern history.

“I thought that the wars in America’s future would be fought in the Middle East, so I took two years of Arabic and all the Middle East history courses I could take. And I was right.”

Gadson graduated West Point Military Academy and was commissioned as a field artillery officer on May 24, 1989—three days before Memorial Day, a holiday that was now becoming more meaningful to the brand-new second lieutenant.

As he rose through the Army’s ranks, hostilities rose around the globe. By the end of the Cold War era, military members found themselves deploying to locations they’d only read about.

“I’ve done roughly five deployments,” he recalls. “I was in the first Gulf War, Haiti, Bosnia, Afghanistan and Iraq.”

It was during his last tour to Iraqi in 2007 that Gadson, then the commander of a field artillery battalion, was riding in a vehicle that struck an IED.

As a result, Lt. Col. Greg Gadson was left without legs below his knees.

For the first few years that followed, Gadson focused on recovering from his injuries and adapting to life without legs. It was during his rehabilitation that the significance of Memorial Day began to take a much deeper meaning.

“I was in intensive care in Ward 57 of the old Walter Reed [Hospital] just before Memorial Day and I remember hearing all the motorcycles that participate in Rolling Thunder [an annual event in which tens of thousands of motorcyclists ride to Washington D.C. in observance of Memorial Day].”

“There were so many riders and it was SO loud! It literally brought me to tears for two reasons,” he says. “One, understanding the sacrifice that so many have made and why we have this holiday. But, secondly, how close I was to being memorialized. Now the day has a much more profound effect on me.”

Despite his physical limitations, Lt. Col. Gadson’s injuries did not effect his drive and determination. In addition to his desire to recover physically, one thing he says kept him going was working to convince the Army that he still had service left to give.

“Before I was injured I thought that I’d do my 20 years in the Army, retire as a lieutenant colonel and move on to the next stage of my life. But, when this happened at year 17 it kinda reshuffled the deck for me. I didn’t want to be forced to leave the Army, I wanted to leave the Army on my own terms.”

After a long process of paperwork, meetings and conversations, Gadson convinced the powers-that-be he should remain on active duty. The military review board agreed his next assignment would be as Director of the U.S. Army Wounded Warrior Program.

“My job was to provide advocates for the severely wounded, injured and ill Soldiers that were eligible for the program,” he says. “During those early years in the war, it wasn’t easy to navigate all the federal systems. When you’re trying to focus on getting your health and your family in order, you need someone to help manage some things for you and that’s what we did.”

No sooner had he begun to learn his new job when an LA-based military liaison called to offer him a second one — actor in a Hollywood movie “Battleship.”

Lt. Col. Gadson’s participation in the movie received a quick approval at the highest levels and soon his days got much longer with duties on two coasts.

“At first I was really concerned about learning my lines, but that’s not even the half of it,” he recalls. “You have to establish trust because you’re making yourself vulnerable. You are opening yourself up emotionally and that vulnerability is what I needed to be able to expose in my character. It’s like opening the cupboards and pouring out all the stuff you’ve got buried in there.”

In the movie, Gadson plays a double-leg amputee being rehabilitated at a military hospital in Hawaii when aliens attack. With the help of co-star Brooklyn Decker and a pair of high-tech, metal legs, Gadson takes out the bad guys. To this day he stay in touch with Decker and director, Peter Burg, though he’s not sure he sees any acting work in his future.

“I’m not kicking down doors trying to find a new role,” he says, “but I always try to be open to opportunities as they present themselves.”

Once his part was filmed, he returned his full attention to his day job, taking care of Soldiers and their families as they faced the toughest challenges of their lives. After a successful two years at that, he was selected for promotion and given orders for what would be his last tour in uniform as Garrison Commander of Fort Belvoir, Virginia.

As Col. Gadson retirement grew closer, he began to shift his focus once again, this time to life after the Army.

“I think my transition really began after I was wounded,” he says, “so I guess you could say I had seven or eight years to prepare for it, which is rather unusual. From the time I was injured until I got out of the Army I knew exactly what I wanted to do. I had a plan and I’d begun laying it out before I even realized it. I think that in a lot of respects leaving the Army was the easy part. It was overcoming my injuries that gave me a perspective of transition that made everything else pale in comparison.”